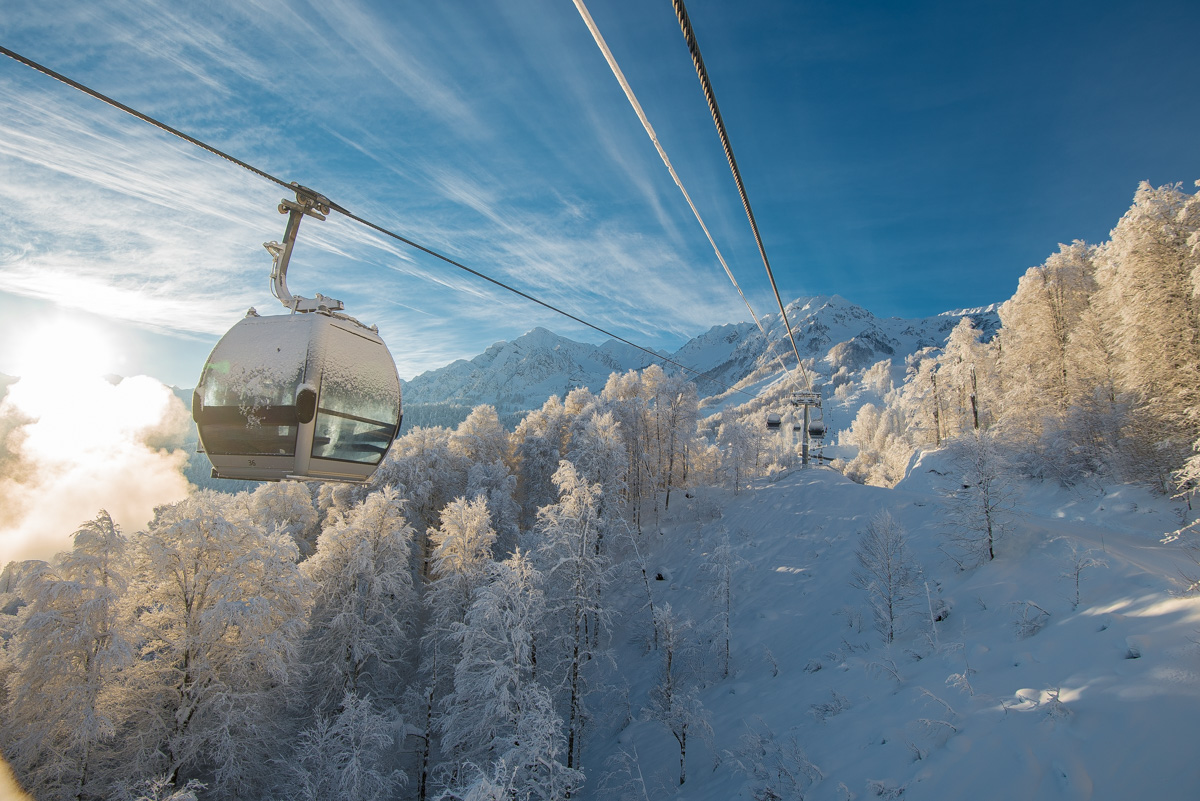 This jubilee 2020-2021 winter season, the 30th chairlift called Veronika, will be put into operation at the Rosa Khutor Ski Resort. The Resort’s top managers hope that its opening will help avoid long queues.

EcoTourism Expert is informed that the chairlift is located on the popular southern slope of the Aibga ridge. This slope is more open, there are wider and flat courses. But until now, there were just two chairlifts in this place. They had to be closed in inclement weather. The new chairlifts will be of a ski gondola type.

This is the first cable road in Russia offering enhanced comfort and safety of the D-line series. During its designing, the developer - the Austrian company Doppelmayr Seilbahnen Gmbh - used 205 new developments, 31 innovations and 14 patents. The chairlift concept has been worked out for several years. The result is a cable way with modern cabins for up to 10 people. Its total length is 2,039 metres, the vertical drop is 661 metres. The cable road can carry 2,400 people per hour and move at a speed of 6 mps.

Today, Rosa Khutor is a year-round resort. In winter, it is a mountain ski resort and in summer, its trekking, hiking and cycling trails are very popular. But once, long before the decision was made that Russia would host the Winter Olympic Games in Sochi, it was planned to create a small resort here with six chairlifts and only a few hotels in this picturesque place with an abandoned bee farm. The Rosa Khutor Company was established in 2003.

As a result, Rosa Khutor is the largest ski area - 102 kilometres - in Russia today. At the same time, the majority of tracks (68%) are more than 1,500 metres above sea level. The Resort has the largest snowmaking system in Europe, which includes two man-made lakes, 404 snow generators, including 382 stationary and 22 mobile ones. At subzero temperatures, the system allows to cover more than 100 hectares of area with snow and provides the skiing season up to 140 days a year - almost until the May holidays. The Rosa Khutor Resort employs over 2,500 people, including unique services that are not offered anywhere else in the country, for example, an avalanche protection unit. The Resort also has its own professional rescue unit.

It all started with the creation of a beach in the Imereti Bay. Rosa Khutor rented it and offered the tourists a package of services - the accommodation in the mountains and transfer to the beach.

Over the past decade - the first stage of the Resort was launched on December 15, 2010 - Rosa Khutor has turned from a ski resort into a year-round world-class mountain resort. Up to 2 million guests a year come here, and over a decade, 11 million people have visited it.

Eight times in a row, Rosa Khutor was considered the best ski resort in Russia according to the prestigious international World Ski Awards. The Resort won the TripAdvisor’s Travellers’ Choice Award in 2020 and became one of the world’s top attractions.

The winter season at Rosa Khutor is already open.