Where do tangerines grow in Russia?

Every year, all the markets across the country look orange as winter approaches. Tangerines! These orange small “suns” seem to convey their greetings from hot countries such as Turkey, Spain, Morocco. And few people know that in Russia, the only city where tangerines grow is Sochi!

Surprisingly, the Sochi’s subtropical history began thanks to the Russian soldiers. When Russia came to the Caucasus, mainly three types of trees grew there - beech, oak and hornbeam trees, and there were chestnut trees as well. But there was no great variety of trees. The climate of the Russian subtropics was warm, and General Raevsky ordered to set up a subtropical station at each fortress. Plants were brought to Sochi from the Crimea’s Nikitsky Botanical Garden. This is how palms, magnolias and cypresses appeared on the coast. In the 1920s, the entire Soviet country carried out - with great enthusiasm - the experiments in developing new varieties of various plants; such experiments were first made by Ivan Michurin, the famous plant breeder and great botanist. There was even a joke: “How did Michurin die? They say, he climbed up a tall poplar for fresh dill, and a lot of watermelons fell on him from the tree...” In the same years, scientist Fyodor Zorin worked in Sochi on the production and introduction of frost-resistant citrus tree varieties. Fyodor Zorin grafted the cuttings of the Abkhaz tangerines, Moroccan oranges, Chinese fortunella and other fruits to a wild lemon tree. As a result, he managed to get two new tangerine varieties such as the “pioneer” and “Sochi” ones. Today, the work of Fyodor Zorin is continued by the scientists of the Subtropical Scientific Centre of the Russian Academy of Sciences (RAS) in Sochi.

- At the RAS’s Subtropical Scientific Centre, work is underway to create and replenish the genetic collections of subtropical, southern fruit trees, and flower-ornamental plants. The collections became larger due to introduction, for which the species and varieties from other geographic regions, including from abroad, are used. After testing them, the species and varieties are selected that are most promising for cultivation in the region or for use in the breeding process, the Centre’s press department says.

Today, the Centre has one of the country’s largest varietal gene pools of subtropical and southern fruit trees, flowers and ornamental plants from different floristic regions of the world, and the Centre preserves them. In total, the collection of genetic resources includes 2,650 varieties. Over the past five years, 45 new varieties of subtropical and southern fruit trees, flowers and ornamental plants have been produced at the Centre and transferred to the Gossortcomission (State Commission of the Russian Federation for the Testing and Protection of Selection Achievements). First of all, those were several varieties of pelargonium, freesia, anemone, chrysanthemum, persimmon and apple trees. The State Register of Breeding Achievements includes 63 breeding varieties produced by the Subtropical Scientific Centre, and the Centre received 46 patents for its breeding achievements. 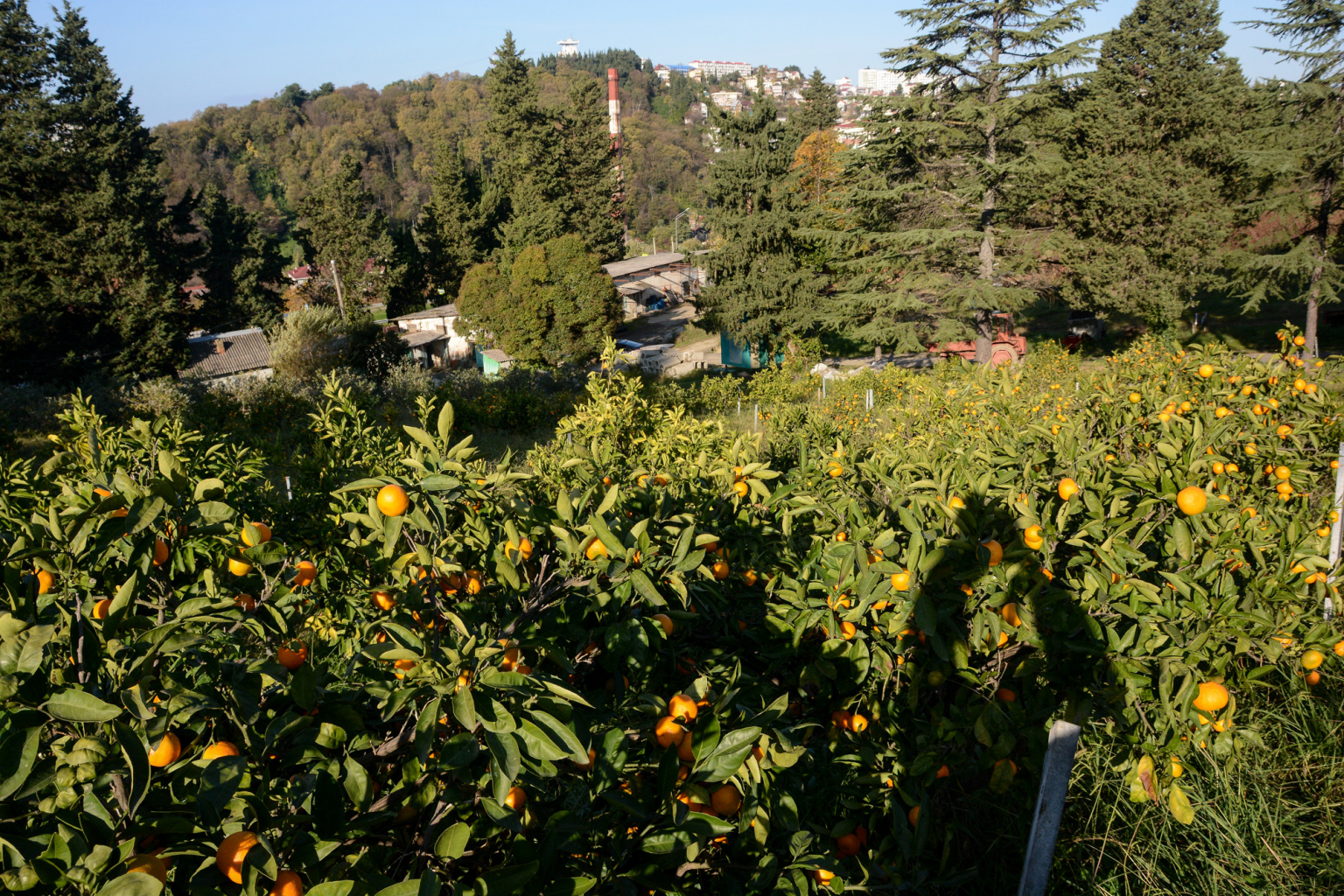 Of course, the Subtropical Scientific Centre’s employees pay the closest attention to tangerines. Breeding a variety is a long process and can take up to half a century, and the scientists have already managed to obtain seven varieties of the Sochi tangerines and three more varieties are submitted to the Gossortcomission for approval.

- The main task of breeding new varieties of citrus fruits is to increase their frost resistance. Sochi is the only area in Russia with the climate suitable for these trees. Nevertheless, the winters are rather cold in

this region, the tangerine trees can withstand the temperatures down to minus 12 degrees Celsius for just a few hours, but our varieties and hybrids can withstand the cold weather much longer. In fact, it is almost impossible to achieve a decrease in the plant growth temperature by even one degree. Whoever succeeds in this will immediately be awarded the Nobel Prize,” says Raisa Kulyan, Head of the Selection Laboratory at the Subtropical Scientific Centre.

To increase the frost resistance of tangerines, a hybridization method is used. The plants are crossbred, then the scientists wait for flowering. A new quality such as cold resistance may affect the other properties of the fruit. For example, tangerines may become less sweet. This means that the process is repeated. Again, a hybrid is being selected, which can help make tangerines taste better or have a thin rind. In addition to cold resistance, the scientists from the Sochi Subtropical Centre work to improve other properties - early ripening of fruits, planting density and tree height.

- A special plantation has been created for the development of new varieties where more than 1,200 tangerine trees grow. For example, while tangerine trees are usually planted at a distance of one and a half metres apart, we use trellises after 50 cm. We also breed low-growing varieties - the tree does not exceed two metres. It’s easier to cover these trees for the winter period and to harvest the tangerines. We also do our best to ensure that tangerines ripen faster. In this case, the entire crop can be harvested before the cold weather and the tree can go to the “wintering” stage easier. And by the way, such fruits are normally sweeter and their rind thinner, explains Raisa Kulyan.

Rich in vitamin C - and vitamin P as well

They start harvesting tangerines in Sochi in October and finish doing this just before the New Year. This year, the tangerine crop is excellent. During the rainy summer, the fruits became juicy. From a small 1-m high tree growing at the Subtropical Centre, 70 or even 100 kg of tangerines are harvested. And at the experimental plantations, up to half a tonne of small orange “suns” can be harvested. The fruits are sent to the laboratory.

- We study the effect of various growth regulators on tangerines - we use organic-and-mineral ones with a high content of chylated silicon, so that the trees can better absorb them; and we also use the growth regulators on the bacterial basis that improves the tree’s immunity, and it becomes more stress-resistant. We determine the content of juice in the tangerines after using the growth regulators. It turns out that from two hundred grammes of tangerines, more than 100 milliliters of juice can be obtained. Then, all our research results allow us to give the recommendations on how to properly take care of the tangerine tree varieties, says Marina Vasileiko, junior researcher at the Laboratory of Plant Physiology and Biochemistry.

By the way, thanks to these studies, the scientists of the RAS’s Sochi Subtropical Centre were convinced that tangerines contain not only the famous vitamin C, but also rutin, the vitamin P (from the word ‘permeability’). This means that such a fruit is very useful for strengthening blood vessels.

One of the unusual fruit trees studied at the Subtropical Science Centre is feijoa. The only plantation of feijoa trees grown from cuttings has been created at the Centre, while in the world, these fruit trees are propagated by seeds only. By the way, this method helps achieve the fruit tree’s stability, including its size and taste. Nowadays, the Sochi scientists have already managed to grow the feijoa tree variety with the fruits over one hundred grammes each.

Another plant that is unique for Russia and is being studied at the Centre, is tea. For three years now, the scientists have been looking for its “gene of cold resistance”. So far, 40 genes have been found, of which 15 are most strongly expressed in cold-resistant tea plants as compared with the ones that are not cold resistant. After studying the key genes, the scientists will be able to improve the cold resistance of tea in future varieties.