Waiting for snow and a skiing season: Top 7 attractions in Sochi for a winter season
News
Exclusive
Expert Reports
Blogs

Waiting for snow and a skiing season: Top 7 attractions in Sochi for a winter season 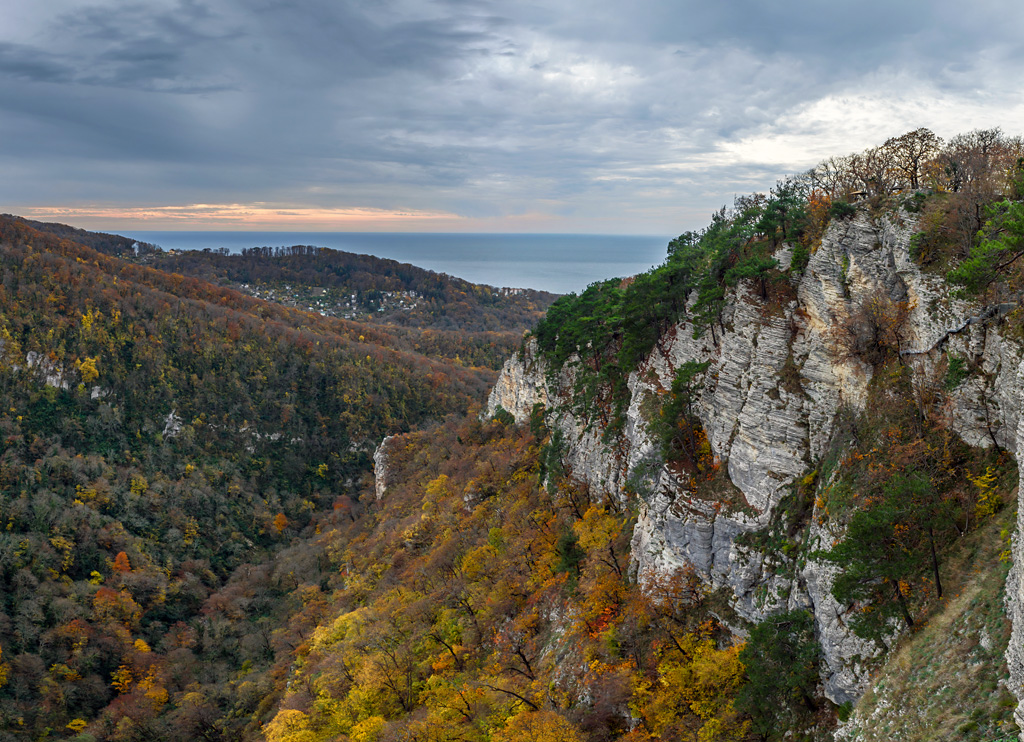 In winter, Sochi turns into a paradise for downhill skiers and snowboarders. During the skiing season, the mountain resorts of Krasnaya Polyana welcome over a million lovers of skiing. But what about those who are not yet ready for an extreme vacation? Luckily, we’ve got the answer here, with this list of the 7 most visited winter tourist attractions in Sochi. 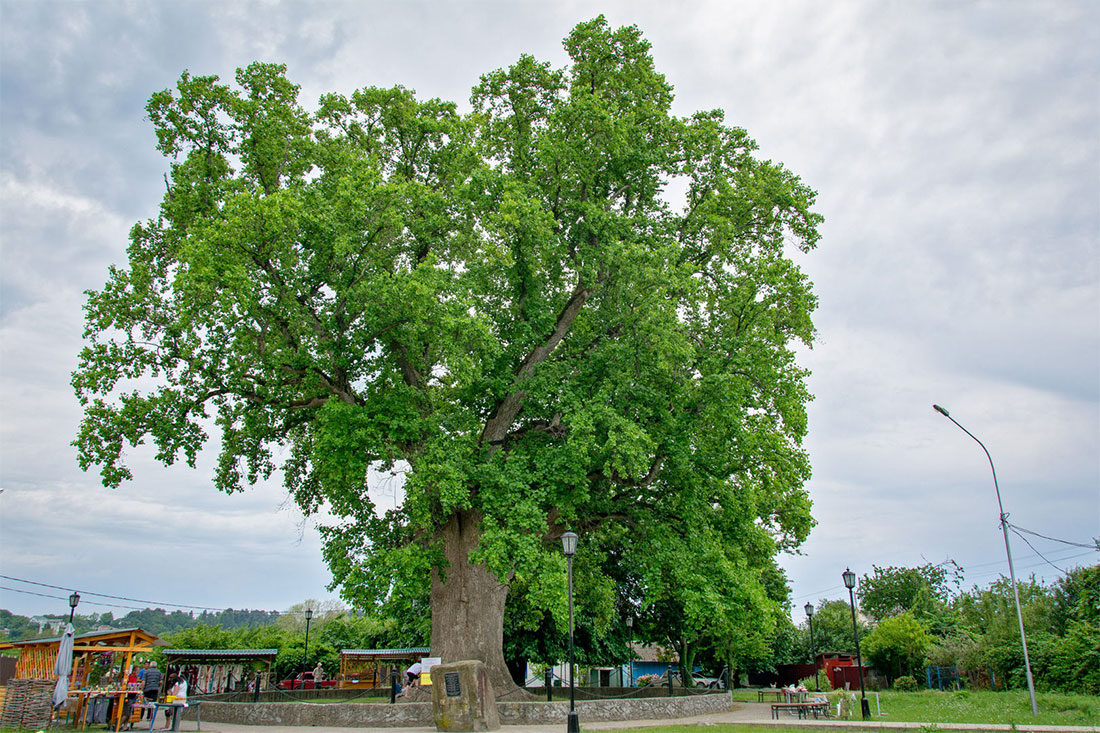 The largest Tulip Tree in Russia and Europe grows in Sochi. The history of how the tree appeared here is not known for certain. Until recently, it was believed that the tree was planted by General Nikolay Raevsky in 1840, during the Caucasian War. In 2013, within the framework of the All-Russian programme “Trees-Monuments of Wildlife”, samples were taken from the tree at the Centre for Wood Expertise and the exact age was determined - in 2021, the giant tree’s age is 254 years, so, the tree was planted in 1767.

The Tulip Tree is one of the important objects of the traditional religious culture of the Adyghe people today: it is a place of worship and religious rites. For example, in May, the Memorial Day is celebrated near the Tulip Tree, special events are held in honour of the end of the Caucasian War, and prayer services for the victims are held.

The Tulip Tree is recognized as a monument of wildlife and is in the register of the old trees in Russia. It is also one of the main attractions in Sochi and a cultural heritage site of regional significance under the state protection. It is over 30 metres high, its trunk is about three metres in diameter, and the crown span is 27 metres.

Several thousand tourists visit the popular attraction site during the tourist season. People take pictures and go into the ethno-spot located next to the Tulip Tree. In the stylized house, national costumes, household items, paintings are displayed.

Several years ago, the tree was struck by lightning. The damaged Tulip Tree was tied with a strong metal chain and reinforced with concrete. Nowadays, the Tree is hollow inside and covered with parasitic fungi. Despite this, the Tulip Tree blooms in May-June, its flowers resemble tulips, that is why it is called the ‘Tulip Tree’.

Take me away, reindeer 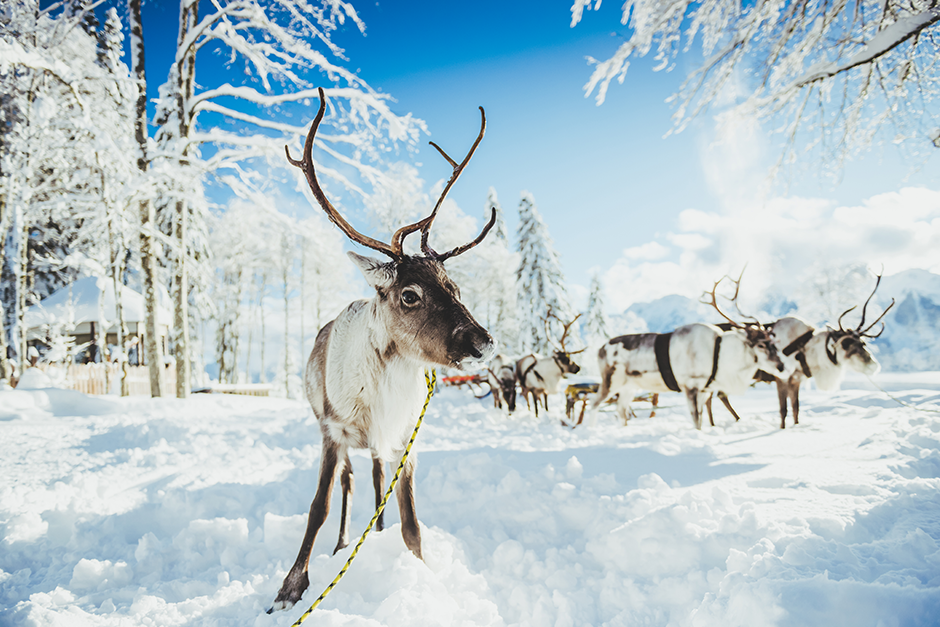 The Rangifer Reindeer Farm operates in the Krasnaya Polyana Ski Resort. Seven animals - six males and one female - were brought to the Resort from the Khanty-Mansiysk Autonomous Okrug (District), and earlier, they lived in the Surgut reindeer herding area. For the guests visiting the Farm, the excursions are carried out by the Farm’s experienced reindeer herders wearing ethnic costumes, they are the representatives of the small Khanty ethnic group. They tell about the life of the indigenous people of the Far North and show them the life of the amazing animals. In winter, Father Frost (Santa Claus) meets the guests together with the Khanty people. The visitors enjoy watching the reindeer and can touch and feed them. To feed the forest beautiful animals, their favorite food - reindeer moss - was specially brought to Sochi.

The main entertainment offered at the Farm is reindeer sledding through the picturesque relict forest. The visitors of all ages enjoy this exciting journey.

A visit to the Leader of the Nations 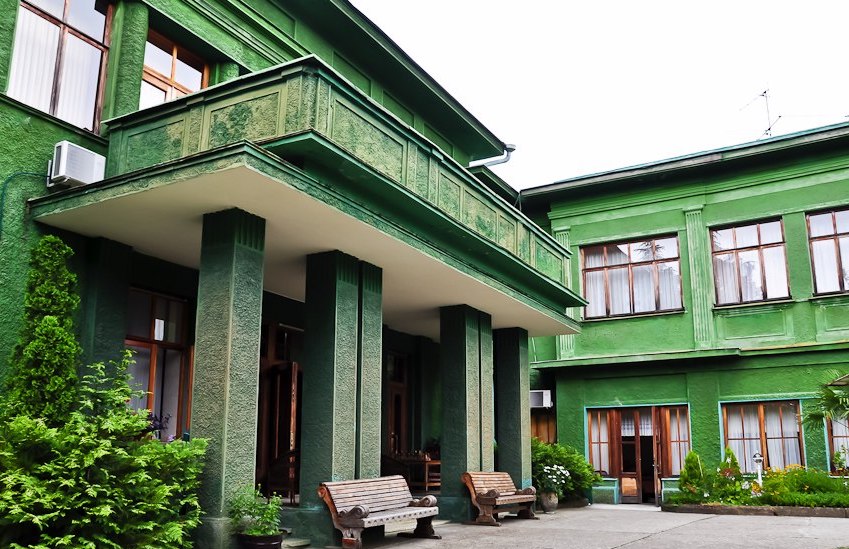 One of the most important attractions of the Resort is the “Stalin’s Dacha” Museum Complex located in the building of the former leader’s dacha (rest house). Since the late 1920s, Joseph Stalin came here regularly to rest and undergo treatment for rheumatism.

The Dacha is located in the former Mikhailovskoye estate that belonged to the industrialist and entrepreneur Mikhail Zenzinov. A large stone house was built in the estate, and a magnificent orchard was planted. In 1931, a cottage was built especially for the Leader of the Nations according to Miron Merzhanov’s project, and a special location was chosen for it. Here, at an altitude of 160 metres above sea level, the sea air from the coast meets the air streams from the mountains, which provides a unique healing microclimate. Six years later, the cottage was completely rebuilt. In place of the old house, a new two-story building appeared. Nearby, the houses were built for other members of the Politburo. Stalin stayed at his dacha every year, usually from August to early October and his last visit was in 1950. A pool was located here filled with seawater from water tanks. Nearby, there was a recreation room with a chess table, wicker chair, gramophone, and a large collection of gramophone records, there was also a cinema and billiards.

In 1991, the former Stalin’s dacha was transferred to the “Green Grove” Health Resort. Since then, it looks unchanged both outside and inside. Today, the past and the present meet here, which can be felt by the visitors coming to this dacha. During the excursion, the guests see the interiors and pieces of furniture kept from those days, enjoy the atmosphere of the era of the Leader of the Nations and breath the fresh mountain air.

By the Black Sea

The beaches in winter

Location: Throughout the Greater Sochi 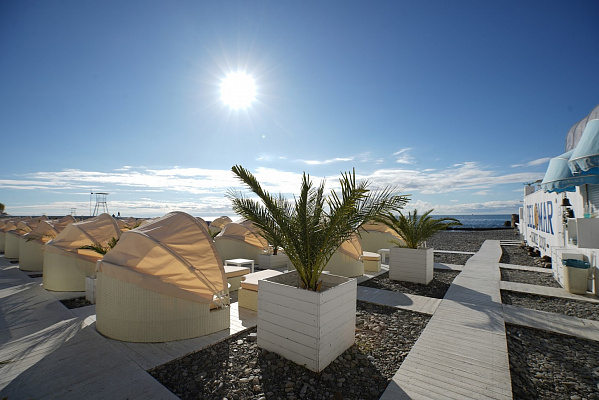 In the 2021-2022 season, more than 30 winter beaches will operate in Sochi located in the Central District on the Primorskaya embankment, as well as in Adler, Khost, Dagomys, and in the village of Lazarevskoye. All areas will be equipped with cafés and restaurants, benches, places for sports, photo zones, public toilets. Everyone can take a walk here, breathe the sea air, read a book or do some kind of activities: gymnastics, yoga, or Scandinavian walking.

For the convenience of guests and residents of Sochi, the winter beaches are marked with golden yellow flags. Also, various agencies will provide the necessary sanitary condition of the areas.

Where there is Prometheus

Monument to Prometheus on the Eagle Rocks 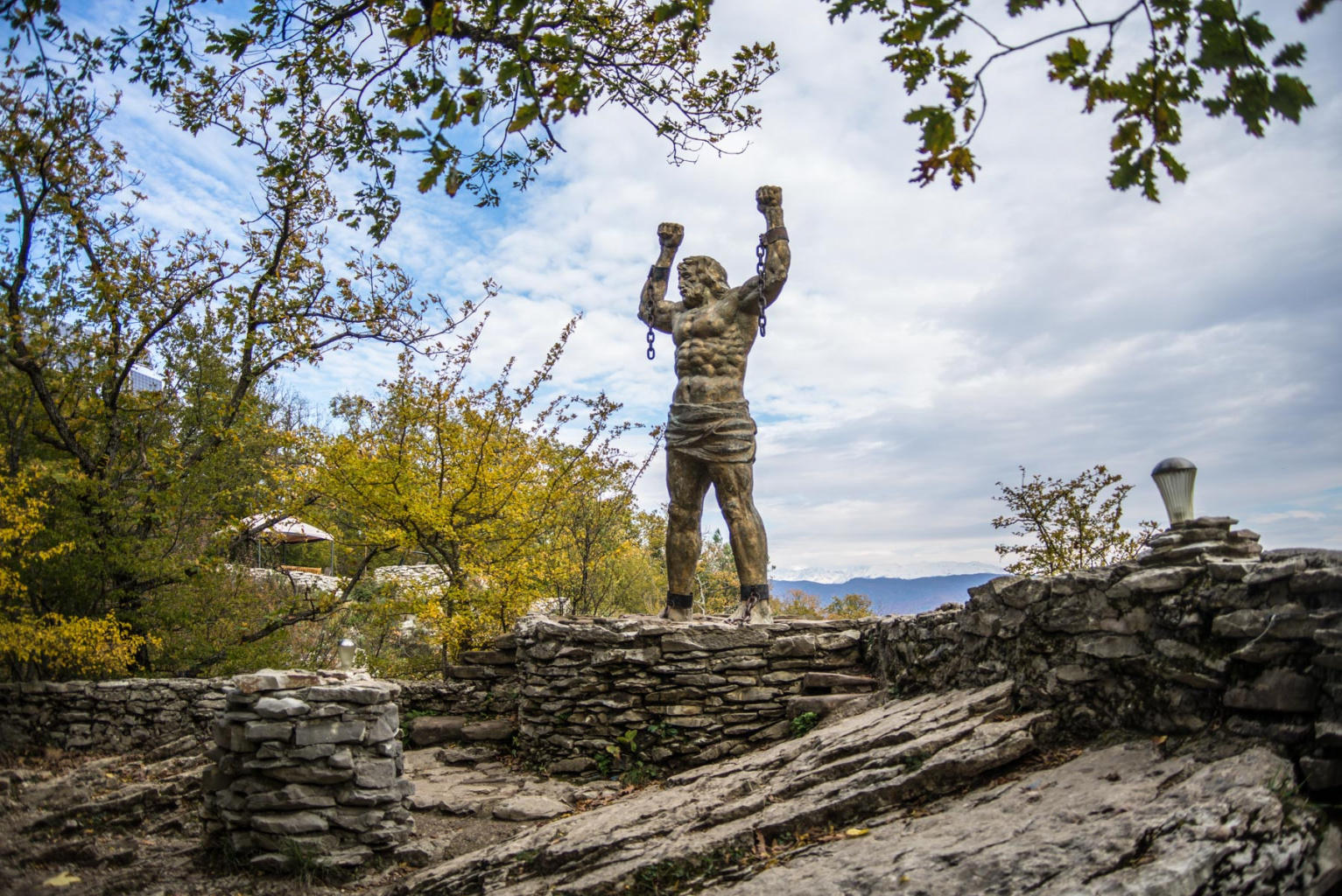 The Eagle Rocks, another unique attraction site in Sochi, are absolutely vertical 125-m high cliffs consisting of snow-white limestone. The tourists can walk to the rocks from Old Matsesta. A two-kilometre hiking trail coming to the Prometheus monument, which people still make up legends about.

In ancient times, when the Gods lived on the Olympus, people wandered through the caves, not knowing fire. The brave titan Prometheus brought fire to the earth from heaven to people, for which he was severely punished by the Gods. They chained him on the rocks in the Caucasus mountains, and sent an eagle to him, which pecked at Prometheus’ liver. The hero had been tortured until Hercules freed him. The legends of the local Sochi peoples make amendments to the ancient Greek myth. According to their version, Akhyn, the supreme God of the Adyghe people, was appointed to follow the execution of the punishment, but Agura, a young girl, helped Prometheus, for which she was turned into a river. By the way, Mount Akhun (named after Akhyn) and the Agura River are well seen from the Eagle Rocks.

The hiking trail goes through a pine and oak forest. At the top of the Eagle Rocks, everyone who climbs to the top has a breathtaking view of the mountains, and the tourists can admire it while drinking herbal tea in the café nearby. 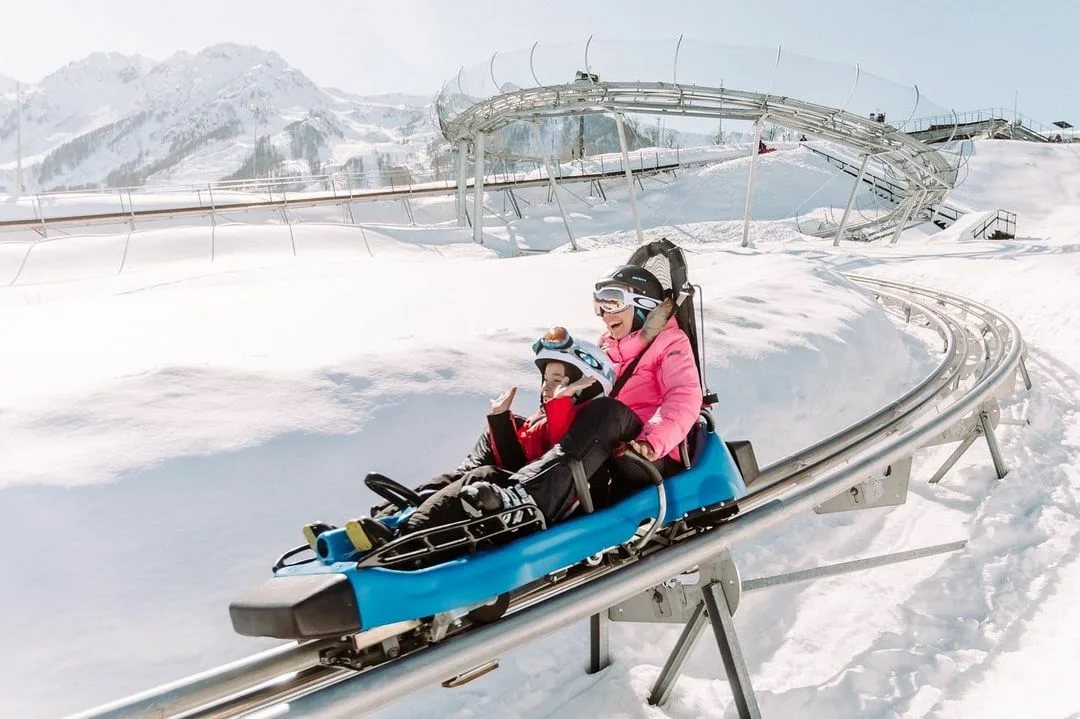 In the Sochi mountains, the visitors can enjoy a Rodelbahn Ride - riding downhill in a rail sled at a speed of up to 40 km per hour. The attraction was invented in Germany. The rail sleds appeared in the Mountain Olympic Village at an altitude of 1,100 m in the summer of 2019 and became one of the favorite vacationers’ entertainment, and the tourists can enjoy stunning views during the Rodelbahn ride all year round.

The sled can accommodate two people, it is also equipped with a hand brake, speed and approach control, and lifting to the starting point is automatic. The 1,350-metre rail track consists of curved lines and three circles. This season, spectacular illumination was installed on the attraction site. Thanks to the lighting, the Resort’s guests can now enjoy a Rodelbahn Ride even in the evening.

The first mountain winery in Sochi 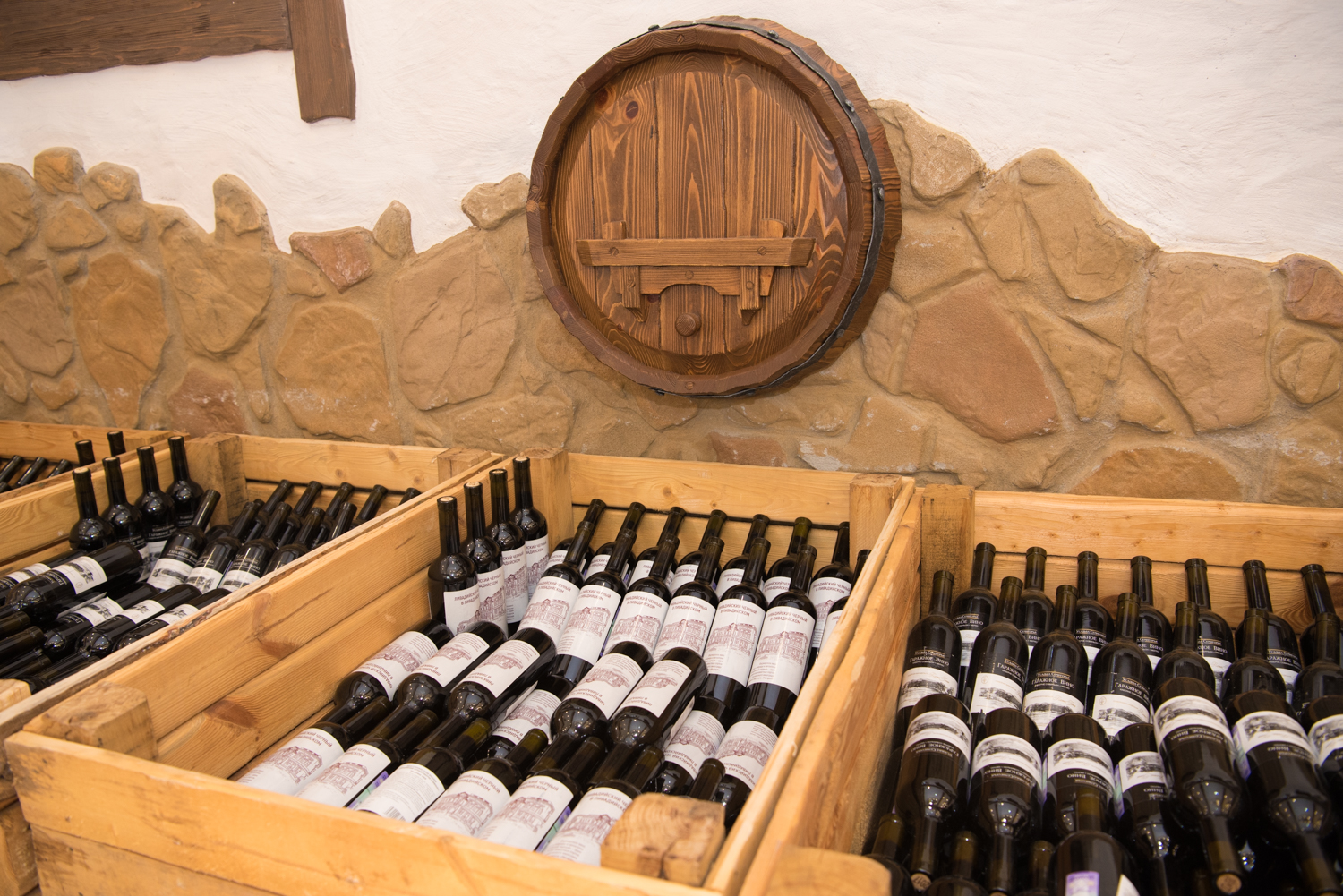 It is now possible to make wine like in Ancient Rome and learn all the know-how of Kuban winemaking at Krasnaya Polyana, where a branch of the famous “Semigorye Farm” estate operates.

Winemaking has always been a traditional occupation in Kuban; the peak of its popularity was in the 19th century when private farms were set up in the region. During the Soviet period, farm winemaking skills were lost in the country as various wines were produced at large-scale enterprises only. The revival began in 2014, when the corresponding law was passed. Thanks to this, small farms began to appear in the region, which now produce wonderful wine.

There are 24 oak barrels installed in the winery of the Ethno-complex. The wines are aged in the barrels for up to one and a half years, undergo microoxidation processes, due to which the wines are properly aged. Various grape varieties are used to produce wines, including classic Cabernet, Sauvignon Blanc, Merlot. There is also Krasnostop, a unique Krasnodar indigenous grape variety, first mentioned back in 1800. All grapes are grown on 50 hectares of land near Anapa.

Interactive excursions are held in the Kuban Pavilion, and experienced winemakers tell the secrets of wine production and also hold tastings and give master classes on making the best winter drink - mulled wine.