The singing sands of the Curonian Spit 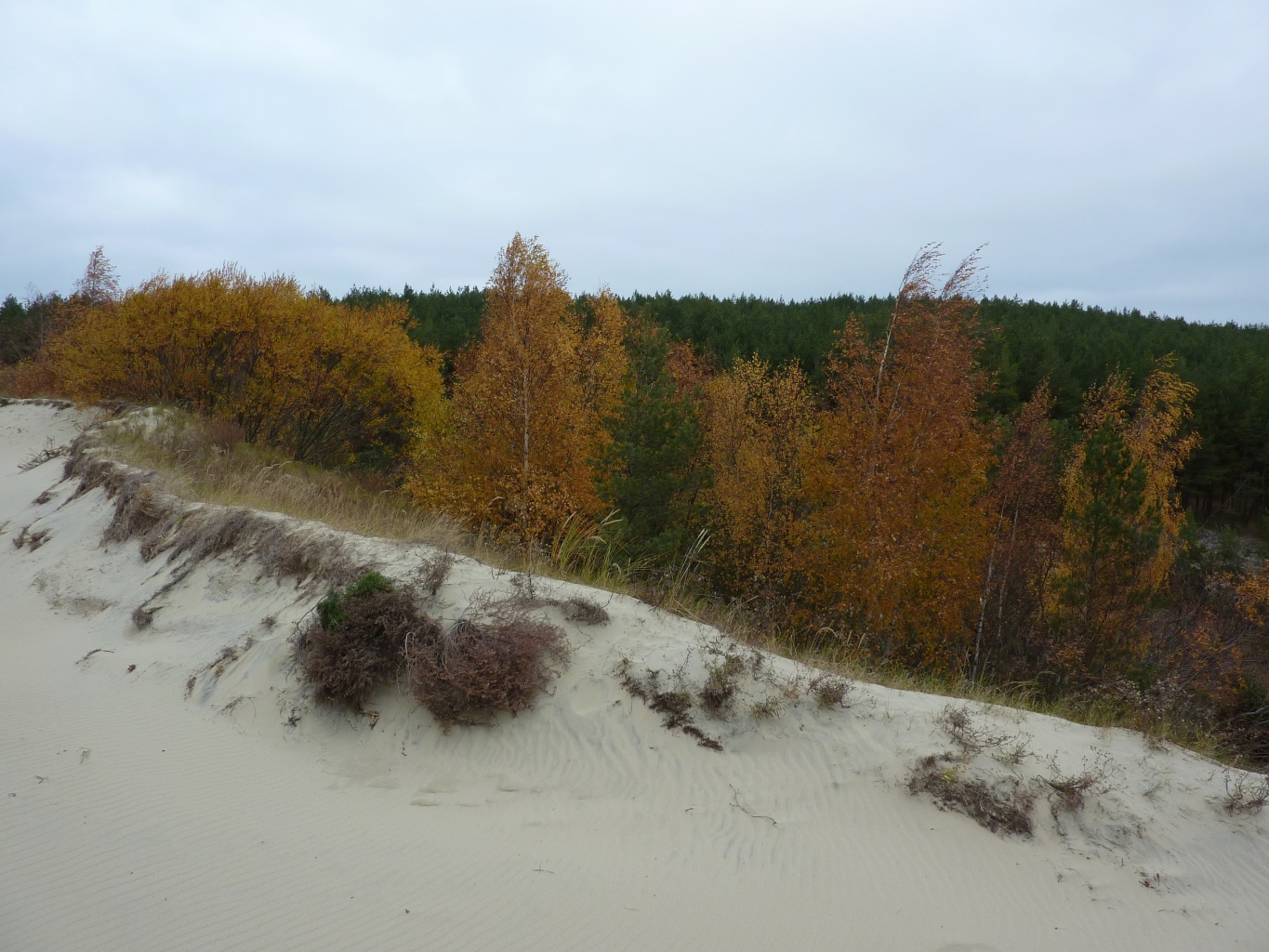 Opening the domestic tourist destinations this year will obviously happen much earlier than the tourist des-tinations abroad. Traditionally, the Baltic Sea, the Russian Baltic area are among the most popular ones. There are many places in the Kaliningrad Region that are interesting to visit from a historical, cultural, and educational points of view. But for an ecotourist, of course, the Curonian Spit is the main attraction, a truly unique natural wonder.

I saw dunes in many countries - in Latvia, France, the Netherlands. Every time, I walked with interest along them looking how they are structured, in which direction they move, how a person tries to ‘curb’ them - eve-rywhere with varying degrees of effectiveness.

But it was only in the Curonian Spit that the dune appeared not as moving sand ‘hills’, but as something truly alive, ‘palpable’ like the skin of a huge mammal. If you also believe - as it was believed in old times - that the Earth rests on three whales, then the back of one of them is clearly seen here. 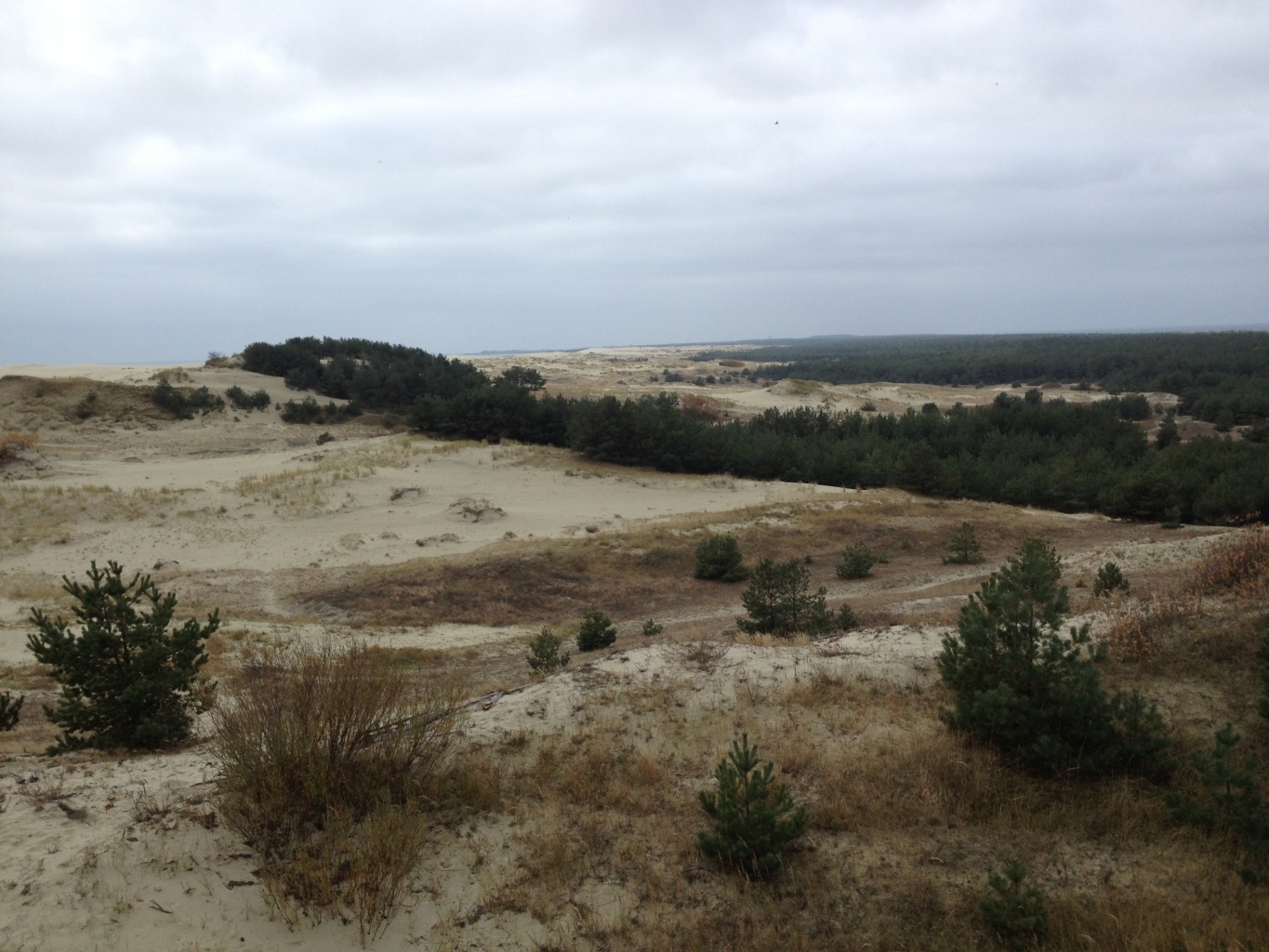 However, there exists a purely scientific explanation for this. The Curonian Spit Peninsula was formed in the latest period of the geological transformations of our planet. About seven thousand years ago, an extended peninsula was formed out of sand. According to scientists, its surface is still evolving. In addition, this is the largest tombolo in the world, and if you built sand castles on the shore as a child, you know how they can be destroyed by waves and wind.

The Curonian Spit is a cautionary and sad example of how the nature can take revenge on humans disturbing the ecological balance. Today, the Curonian Spit is a National Park covered with forests and diverse flora. But, by the early 19th century, deforestation here led to the ecological disaster as the sands got out of control and the dunes moved turning everything into a desert in its path.

Within a few days, sand could cover a house and even a village. Suffice it to say that the village of Morskoye changed its location four times to escape the ‘creeping’ dunes. The people had been forced to leave the Cu-ronian Spit as staying there was unsafe. Sand also began to fill the coastal part of the bay threatening the maritime traffic. The Prussian authorities had to urgently develop a plan to reinforce dunes and fight against the ‘nomadic’ sands.

Only by the end of the 19th century, it was possible to make a strong protective wall and plant seedlings along the dunes’ slopes. At the early 20th century, the movement of most of the dunes was stopped. However, the work on the soil reinforcement and the protection planting continued all the time, they are now under way, too. About one third of the sand of the Spit still needs to be ‘tamed’, although the dunes no longer threaten the ecological balance and the houses. 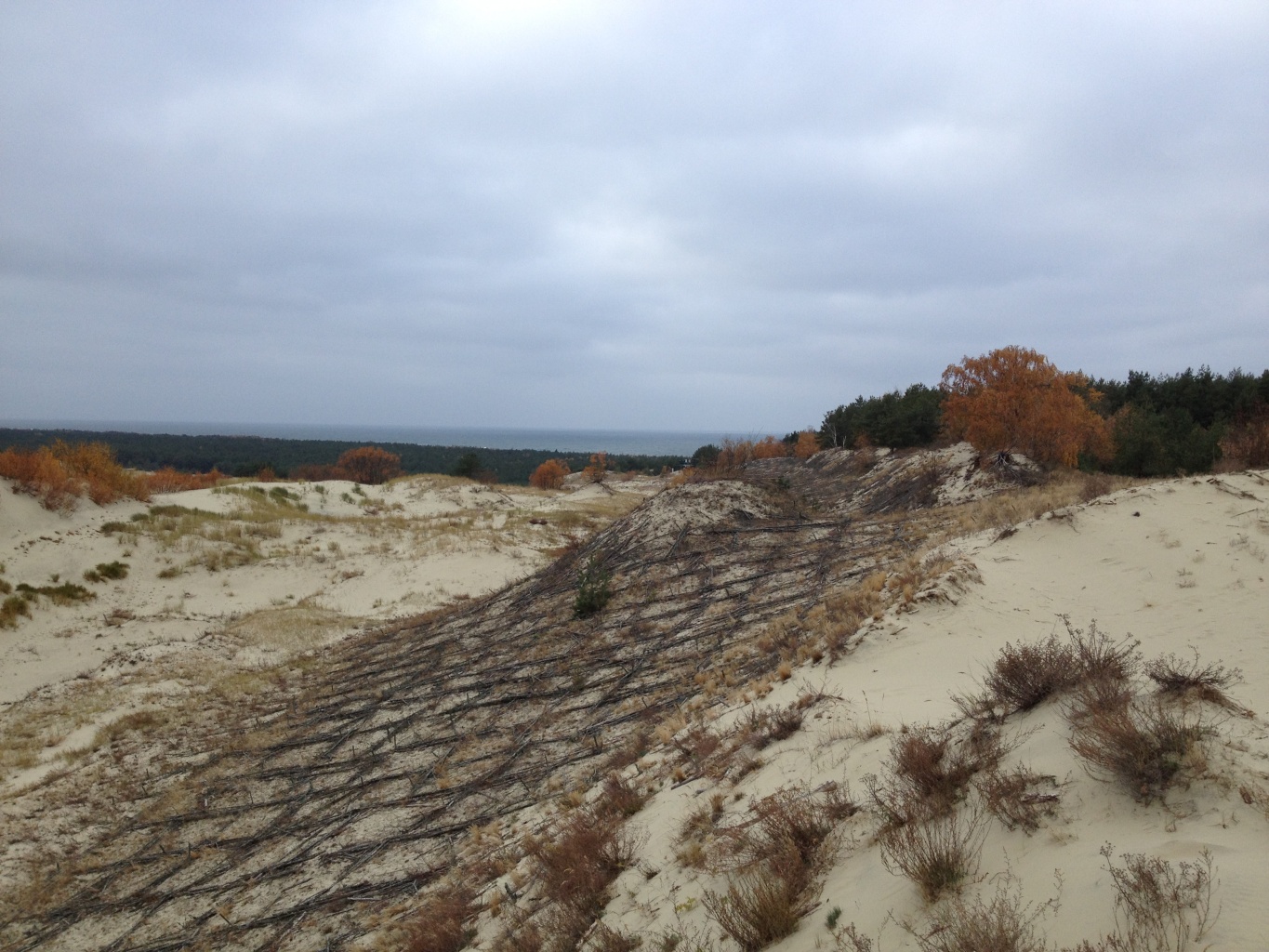 Between the sea and the bay

The employees of the National Park and many information boards and signs remind you about the need to treat the dune on the Curonian Spit, and the nature in general, as a living creature. Walking is highly recom-mended on pathways and wooden walkways only. Any other ‘ways’ threaten to destruct the fragile soil, and the violators can be slapped with a fine. However, there are enough hiking trails on the Curonian Spit to al-low you enjoying the nature without disturbing its beauty.

One of the most beautiful trails runs right next to the Height of Epha, the highest point of the Curonian Spit’s Walnut Dune. This beautiful sounding name is actually the name of the German scientist Wilhelm Franz Epha who was engaged in the dune study and reinforcement for a long time. 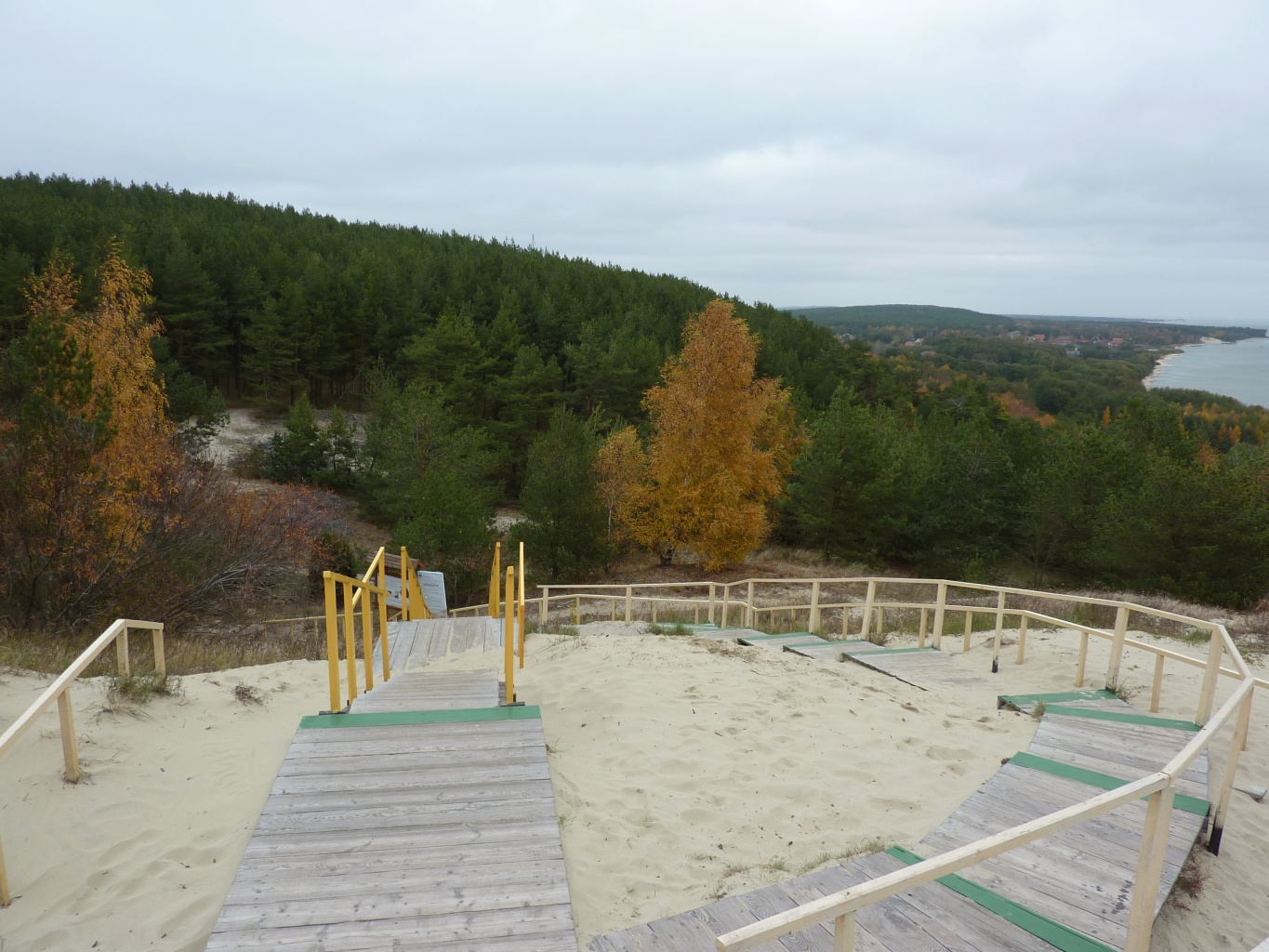 They say that on the Height of Epha, one can hear the so-called ‘singing sands’ - a melodious rustling due to friction of sand grains against each other in high winds. Even louder singing of the sand can be heard if you go down to the sea and go along the coast: music will be from under your feet. And the trail rises higher and higher and leads to the sightseeing platform from where the panoramic views of the dune, woods, villages, the Baltic Sea and the Curonian Lagoon open.

For those who are going here on their vacations, it is important to know that the water in the Curonian Lagoon is practically fresh, unlike the cold sea in summer, it warms quickly but turns green very quickly, too. So, it is good for fishing only, not for swimming. The sea water temperature, even in the hot season, rarely rises even up to 20oC. But as a rule, people go to the Baltic Sea not to swim, but to enjoy long walks, clean air full of sea freshness and pine odor, and to get new experiences. There’s no shortage of them on the Curonian Spit.

As you know, the Curonian Spit, like the whole Kaliningrad Region, became part of Russia after the Second World War. Therefore, all settlements, as well as Kaliningrad, the former Koenigsberg, have their original German names. Zelenogradsk located at the base of the Spit is the former Cranz, the village of Lesnoy was Sarkau, Rybachy settlement was Rossitten, Morskoye was Pillkoppen. Neat German houses, churches and a lighthouse have been kept here. Unfortunately, the Teutonic Rossitten Castle built in the 14th century was destroyed.

The villages located on the Spit were not founded by the Prussians. At the end of 1st millenium and the be-ginning of 2nd millennium, the Vikings settled on the Spit. In memory of this, in the village of Lesnoy where traces of their sojourn were found, a Viking village ‘Ancient Sambia’ (Drevnyaya Sambia) was reconstructed. 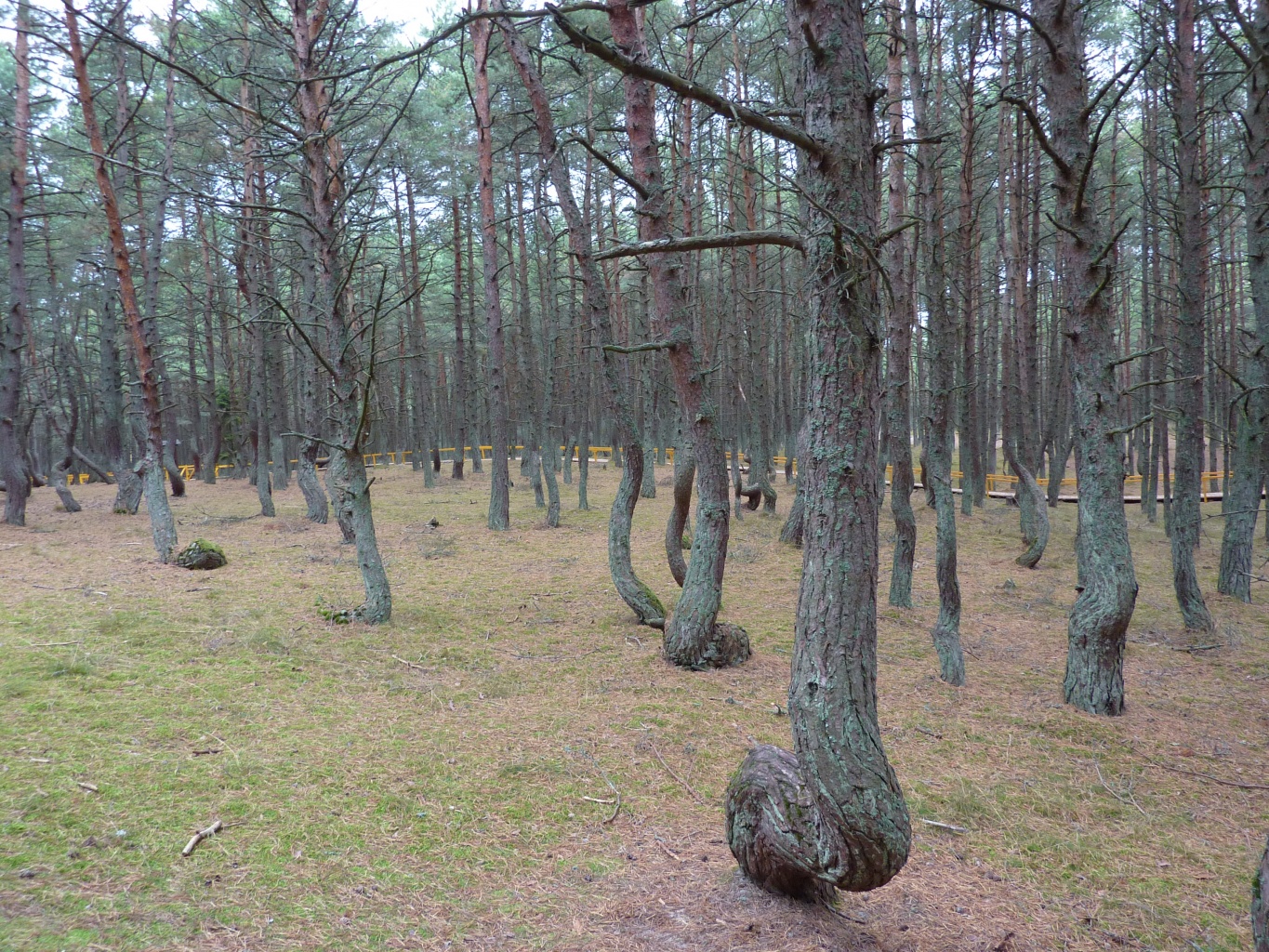 One of the most mysterious places on the Curonian Spit is the so-called Dancing Wood. The trees here are of a very unusual shape, bending in the most unexpected ways forming intricate shapes. Among the many ver-sions of such unusual ‘dancing’ trees, the most plausible is the one associated with drifting sands. Young pine trees were planted in a dune, which continued its movement together with young bodies of trees. There are even more mystical versions associated with wizards and witches, and the Dancing Wood itself is like a ‘por-tal’ to other dimensions.

Like it or not, but for some reason, you can’t hear the birds singing here, and, according to locals, animals do not like this place. But, on the other paths of the Curonian Spit, you can often meet quite ‘peaceful’ wild boars, foxes, and if you are lucky, even a roe deer or an elk.

Still, there are a lot of birds. The Curonian Spit is located at the crossroads of bird migration routes. During the migration period, over 2 million birds fly over the Spit every day; you may learn about their diversity at the Fringilla birdwatching station located in the Rybachy settlement. The word ‘Fringilla’ also sounds mysterious, but only at first thought. It means a ‘chaffinch’ In Latin, it is this bird that most often gets caught in the toils. Like with other birds, its leg is ringed and the bird is released to conduct scientific observations. By the way, the ornithological station opened on the Spit in 1901 became the first in the world.

Among other natural attractions that you should definitely visit is Lebed (Swan) Lake that literally goes into the bay and is separated from it by a narrow strip of land, this Lake got its name thanks to these beautiful and proud birds inhabiting this lake.

By the way, from Lebed Lake, it is just a stone's throw to the border between the Russian part and the Lithuanian part (Kursiu Nerija) of the Curonian Spit. Usually, tourists are interested in how they differ. At first glance, nothing is different but the neighbour’s infrastructure is developed a little better. As soon as the quarantine is over, it will not be difficult to see all the similarities and differences by yourself, if you have an international passport.