The most Flemish city in France 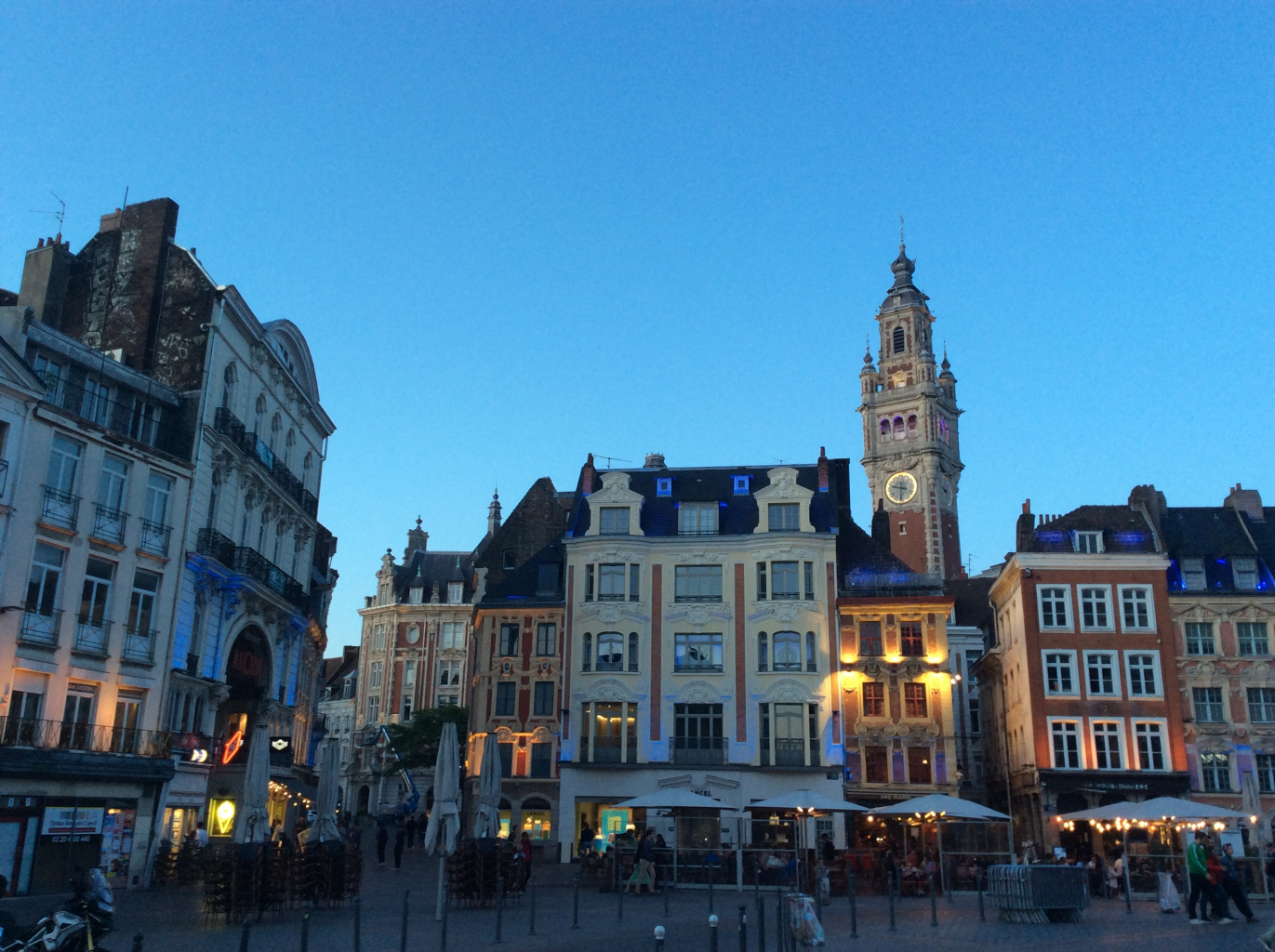 Lille is Europe in miniature. The city is somewhat reminiscent of Paris, somewhat of Brussels, Amsterdam, and even Prague. Throughout its history, it was either part of Flanders or was conquered by one neighbouring state or another. The layout and architectural styles have found the most unexpected development here, and the Flemish Brueghel, Rubens and Van Dyck in the local Palace of Fine Arts (Palais des Beaux arts) look no less common than French painters.

Lille is located at the crossroads of European roads. It is some little distance from three European capitals. It is 40 minutes from Lille to Brussels by a TGV high-speed train, exactly an hour to Paris, and less than an hour and a half by the Eurostar to London through the Channel Tunnel. Recently, Lille has become the last Eurostar stop before the Eurotunnel. Previously, the train also stopped in Calais, but now, it goes straight from Lille to London.

Seeing the traffic in the Paris station area make you feel that the relatively small Lille is a big crossroad. Or rather, two crossroads at once located opposite each other - “Lille-Europe” and “Lille-Flanders”. After two hundred steps from the bustle of the station, you immediately find yourself in a quiet, clean, cozy French town with a quiet way of life and pleasant atmosphere.

While walking from the station to the historic centre of the city, the Church of St. Maurice (Saint-Maurice de Lille Church) founded in the 14th century and the most beautiful one among the temples of Lille is, perhaps, the first thing you see. However, the Notre-Dame de la Treille Cathedral (Cathedrale Notre-Dame-de-la-Treille) is the main cathedral of Lille, a huge basilica, which impresses with its eclecticism much more that with its size. It looks like the one consisting of the elements made by different manufacturers. It took a century and a half (until 1999) to build the temple, which combines neo-Gothic, classical and modern elements, and each architect brought the most modern solutions of his time into the temple design. 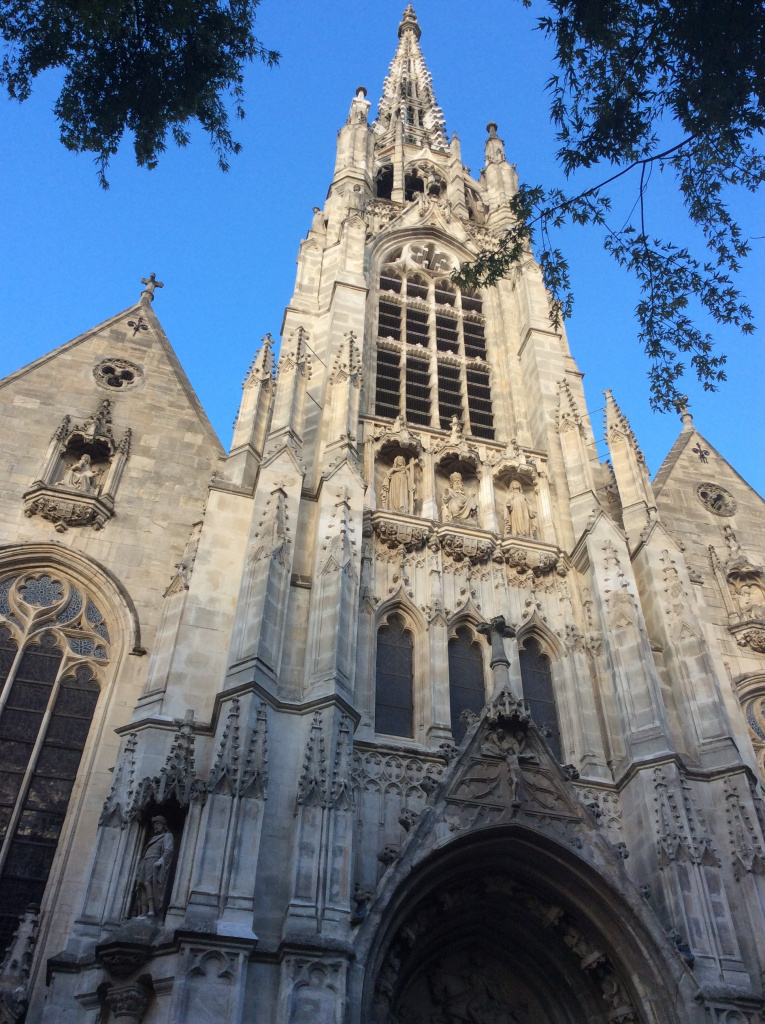 While walking through pretty courtyards and lanes, you see a small house with a garden not far from the main cathedral where Charles de Gaulle, French general and statesman who acted as leader of the French Resistance (Free French) and was the first president of the Fifth Republic, spent his childhood. In the house that belonged to Charles’s grandfather, there was also a family factory for the production of curtain lace, and there is a museum and cultural centre “Factory of History” (Fabrique de l’Histoire) now.

The French often complain that not every young person knows who Charles de Gaulle was, although streets and squares in many cities of France and other countries are named after him. There is also Charles de Gaulle Square in Moscow - near the Cosmos Hotel - with a portrait sculpture of the French general.

In Lille, the birthplace of De Gaulle, the main square is certainly named after him. However, the beautiful Column of the Goddess (Colonne de la Déesse) made in 1845 in honour of the defenders of the city from the Austrian siege of 1792 is also on the square. At the end of the last century, a fountain was built around the column, the comfortable area of which are a favourite place for citizens and tourists, especially on hot summer days. Perhaps, the only tribute to the modern name of the square is that the publishing house of the La Voix du Nord newspaper is located here, which appeared in Lille in 1941 as one of the mouthpieces of the French Resistance. 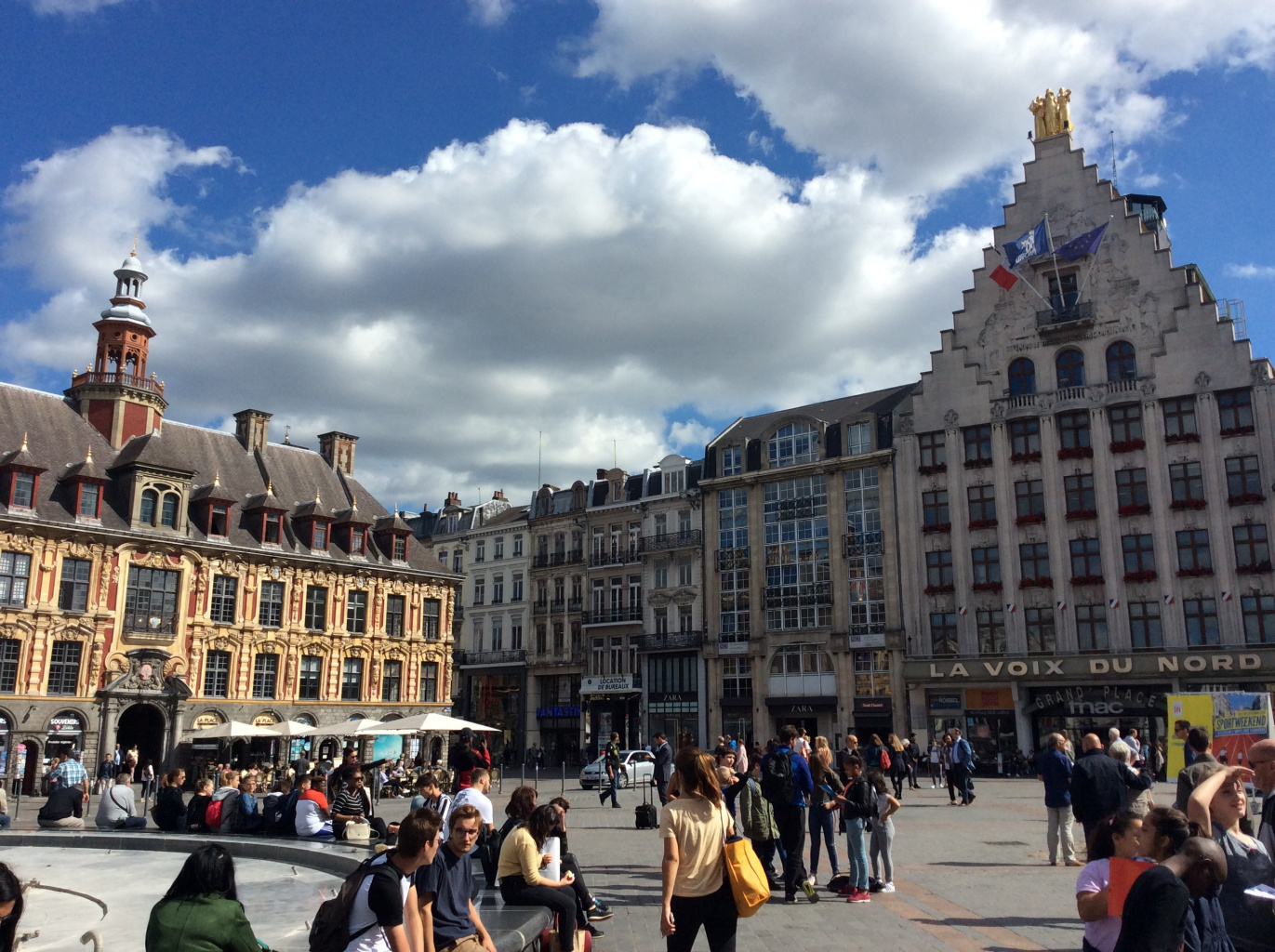 Interestingly, Lille, in fact, has two central squares as the De Gaulle Square (Place Charles-de-Gaulle) turns into the Theater Square (Place du Théâtre) and forms a large public space together with neighbouring pedestrian streets that is framed by the magnificent buildings of the Lille Opera (Opera de Lille), the Old Stock Exchange (Vieille Bourse de Lille), as well as the medieval Rihour Square (Rihour Place) that now houses the city’s tourist office. Social and cultural life is active in the centre of the city, which takes on new forms over time - the Theater of the North (Théâtre du Nord) hosts ultra-modern performances with digital theatrical decorations, and a second-hand book market is located in the courtyard of the Old Stock Exchange (Vieille Bourse de Lille). 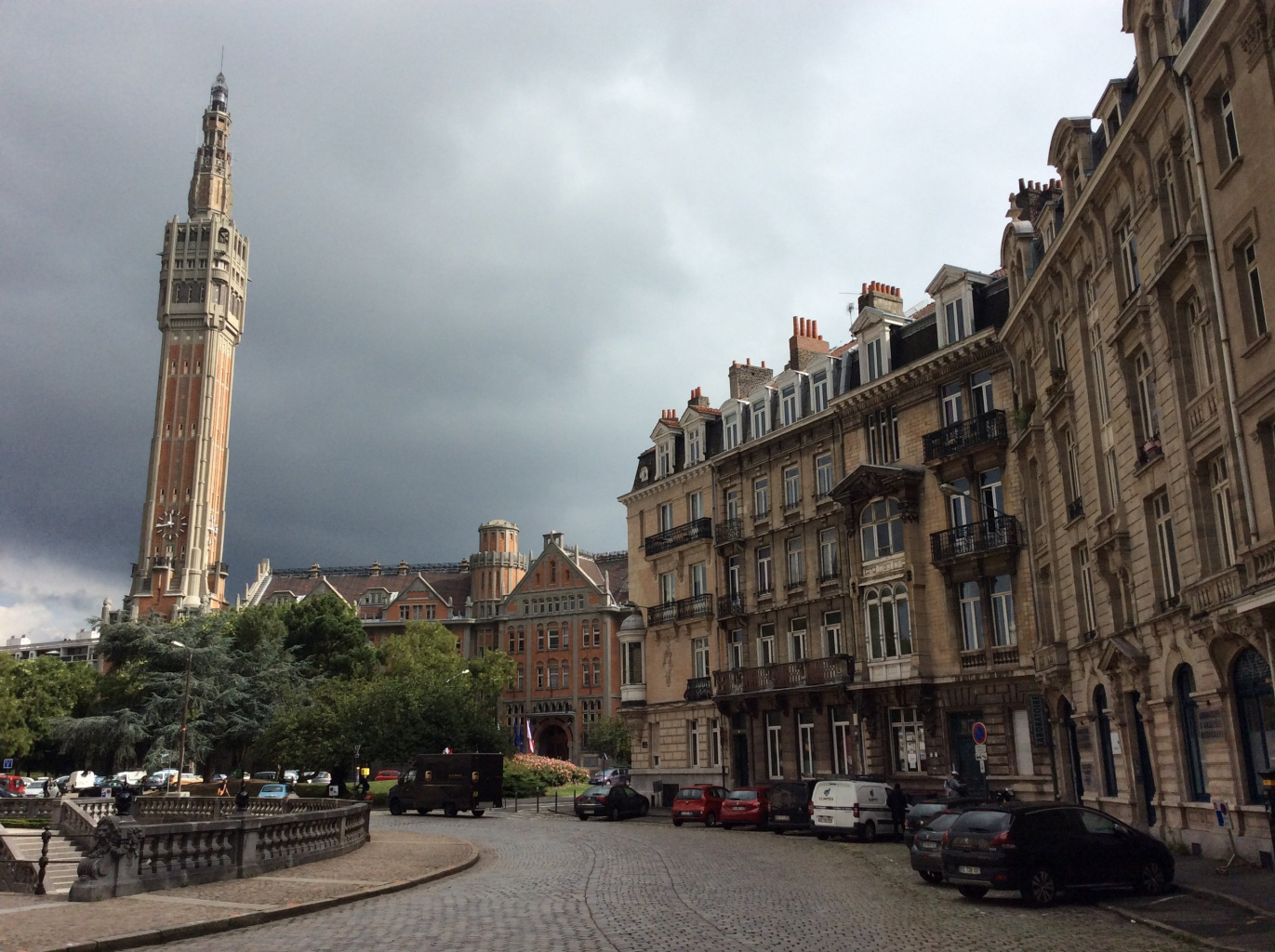 Perhaps, the main attraction of the central square is the building of the Chamber of Commerce and Industry (Chambre de Commerce) with a 76-metre tower. For those who love old Prague, it will surely remind of the magical towers of the Old Town Square (Czech: Staroměstské náměstí). Another building with a similar 104-metre tower included in the list of UNESCO World Heritage Sites is the Lille Town Hall (Hôtel de ville de Lille). Unlike many cities in Lille, the Town Hall building of the Art Deco style is located a little far from the historical centre, which means “closer to ordinary people” and very close to the Paris Gate (Porte de Paris) symbolizing that Lille became part of France. 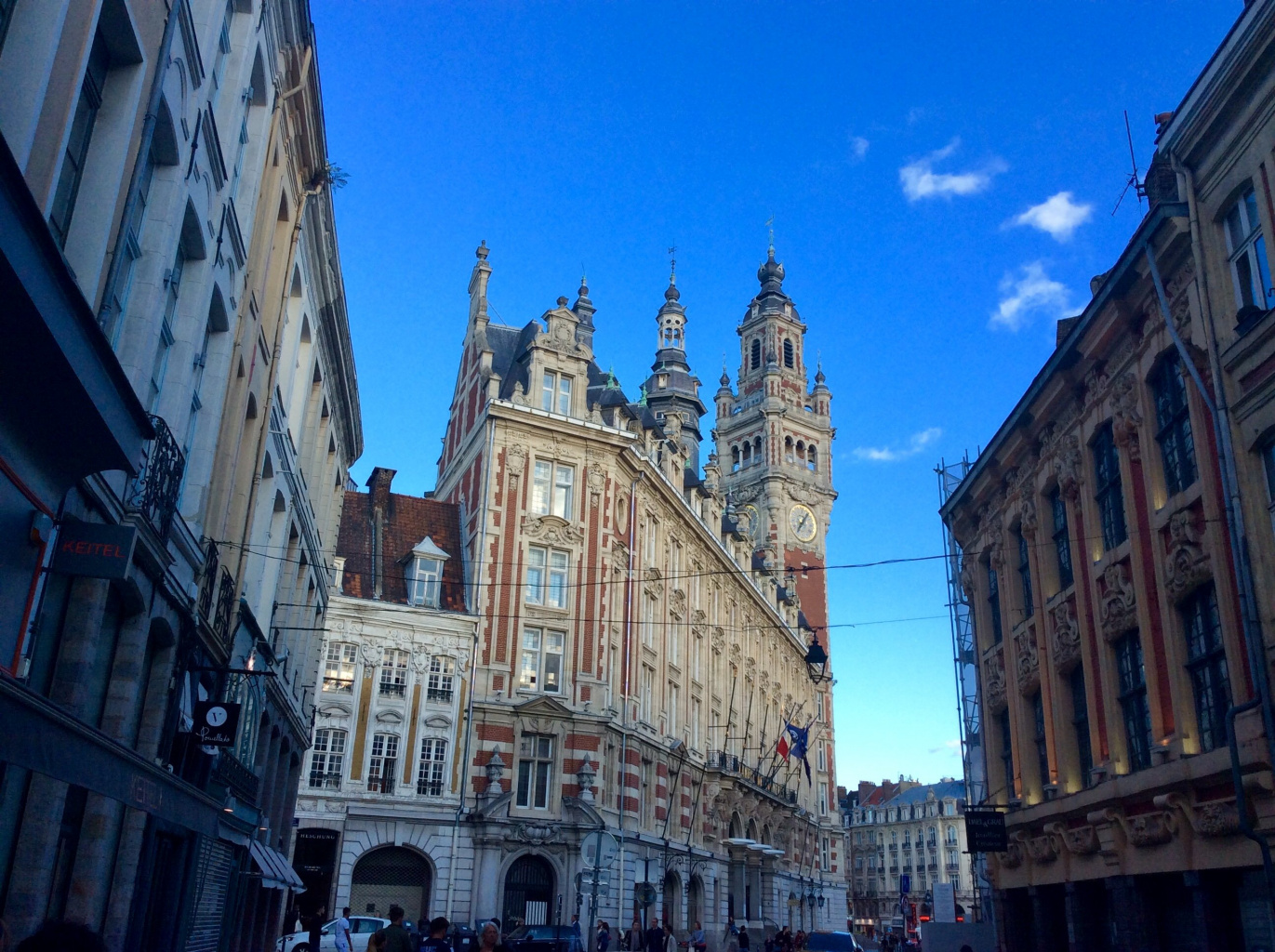 One of the most beautiful palaces in the city is the art museum Palace of Fine Arts (Palais des Beaux arts) built at the end of the 19th century on the Republic Square (Place de Republique). Its art collection is considered the second most important in France after the Louvre (Musée du Louvre) in Paris. It’s up to you how long your visit to the museum can be. I had about three hours for the tour of the museum before going to the airport and almost missed the Express while admiring the Impressionist paintings. 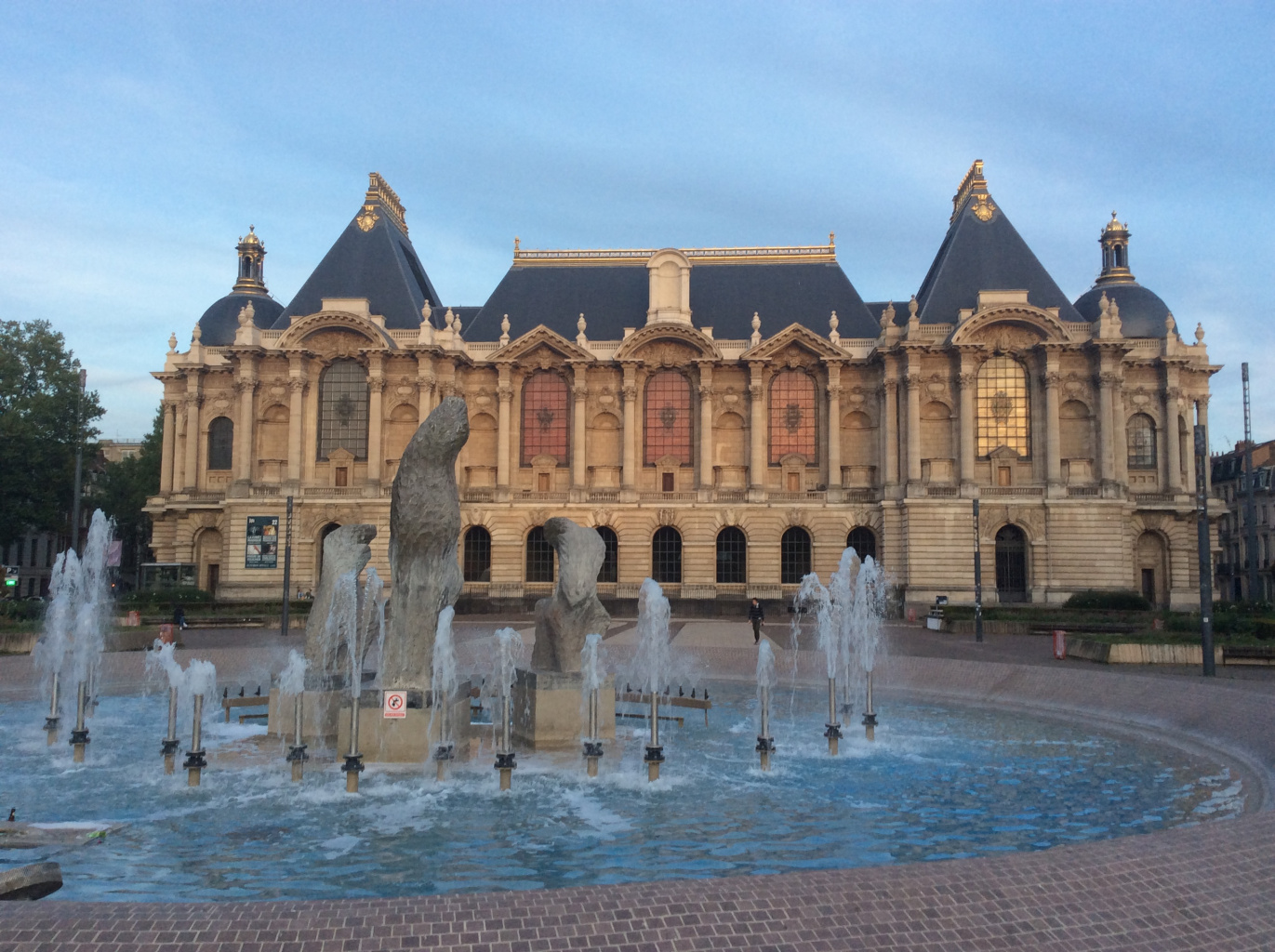 The “highlight” of Lille is that in addition to the historical centre, there is also the so-called “old Lille” - an area in the northern part of the city with paved streetways, small cozy houses, which, as the townspeople say, has a “Flemish soul”. Walking through this uncrowded part of the city is a real pleasure. 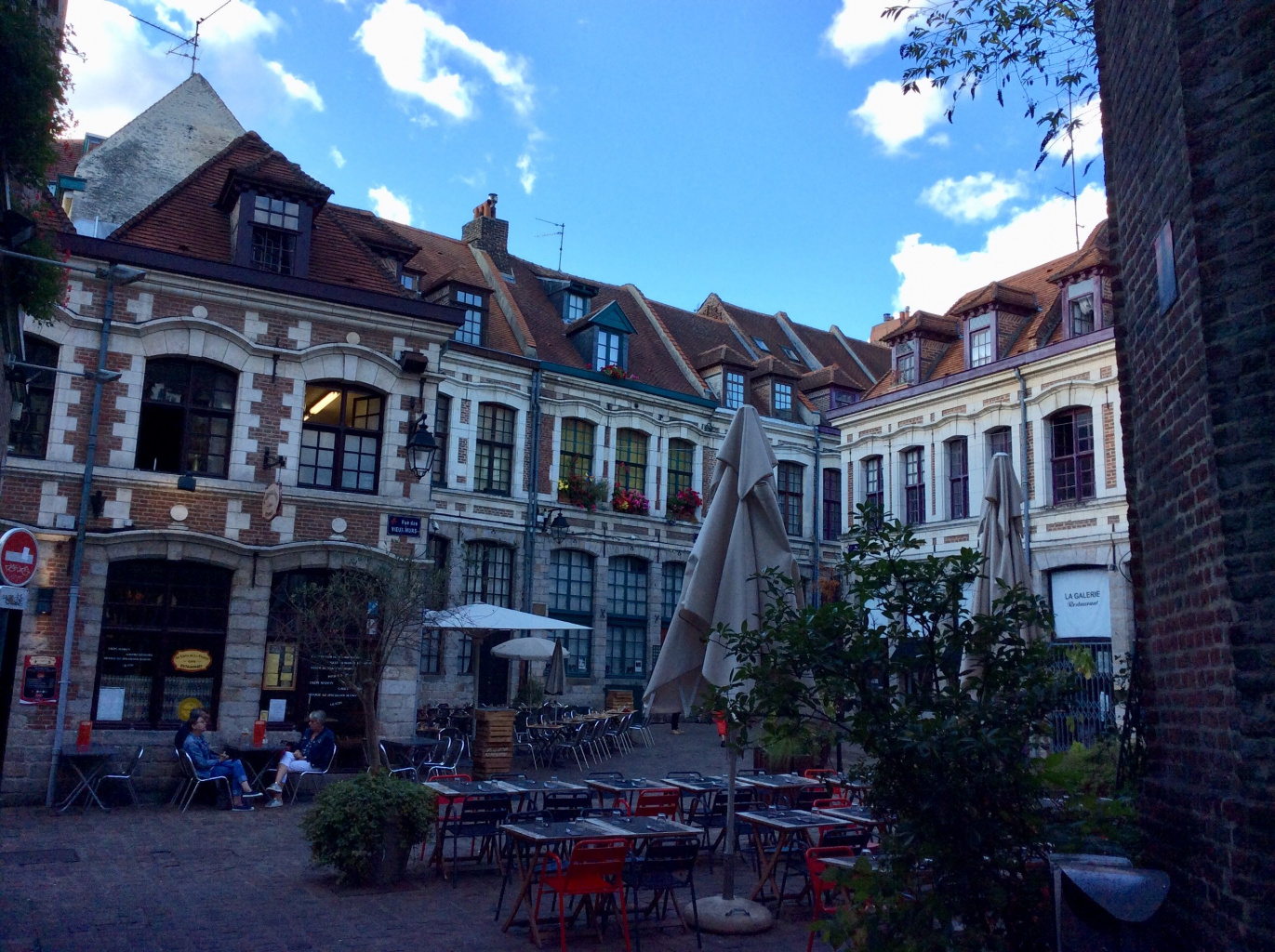 Lille, in principle, is good for walking as the city has many pedestrian areas and green spaces, the largest of which is around the Citadel of Lille (Citadelle de Lille) built in the 17th century by the famous military engineer Sébastien Le Prestre de Vauban, Marquis de Vauban. This Lille’s fortress, unlike many of his other works, was not included in the UNESCO list of monuments, however, it is one of the best fortifications of the epoch, the “queen of citadels”. It still houses a small garrison, so you can visit the Citadel of Lille with a guided tour only. But around it, a huge park area open to everyone was created, with pedestrian paths, bicycle trails, ponds, benches, and the Lille Zoo (Zoo de Lille). 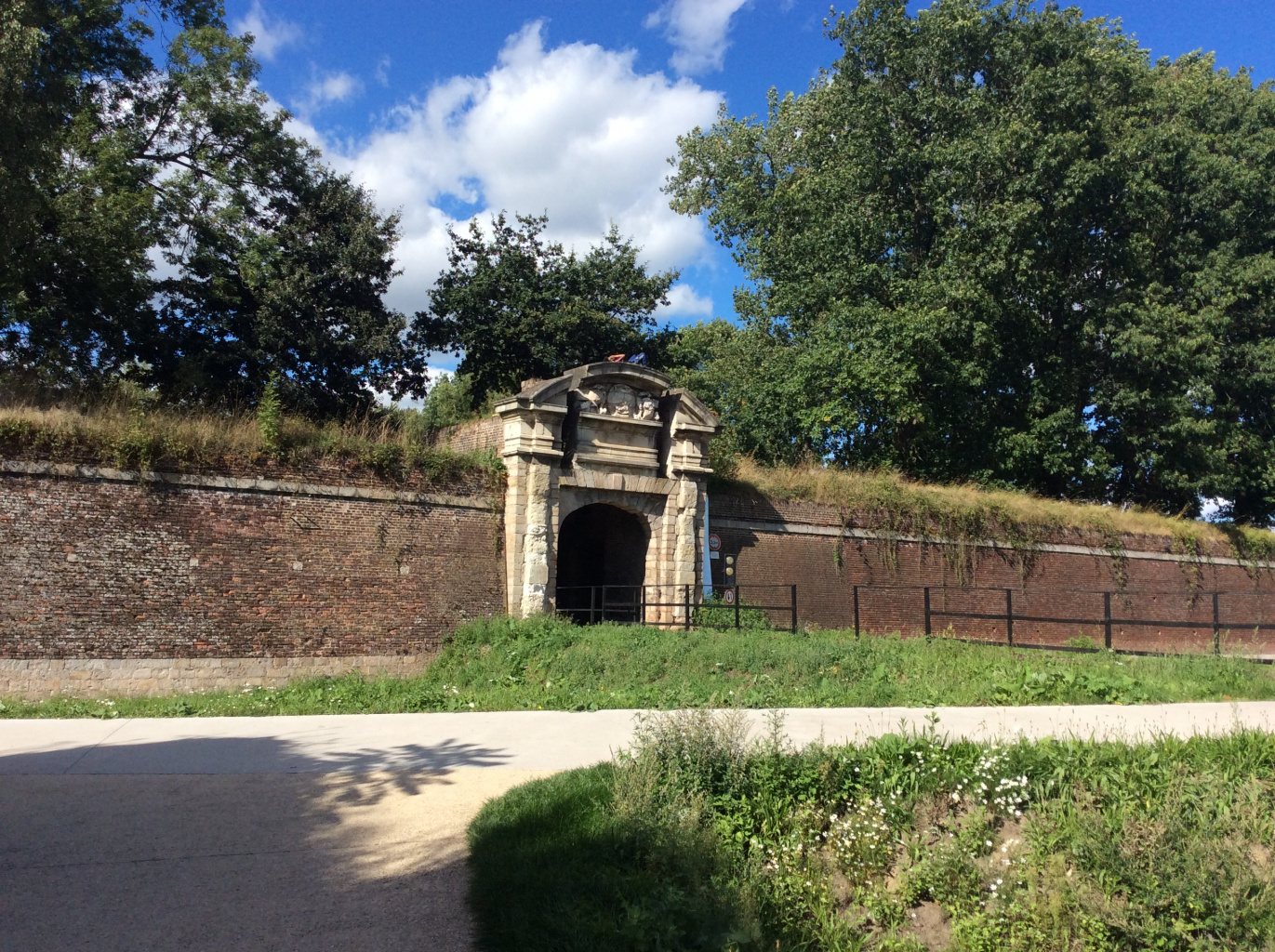 Another “pet’s zoo”, an educational farm with cows, goats, lambs, geese and rabbits, is located in another green area not far from the station. This part of the city is dominated by modern architecture with modernist buildings reminiscent of alien ships. One of the most original creations made of glass and concrete is the Tower of Lille (Tour de Lille) in the form of the “L” letter looking similar to a huge chair or shoe.

The Lille’s contribution to design and architecture was recognized in 2020 when the city beat Sydney, Australia, in its struggle for the title of World Design Capital. In addition to the original buildings in the city, there are many interesting parks. The Park of the Giants (Le Jardin des Géants), a joint work of architects and landscape designers, is among them. 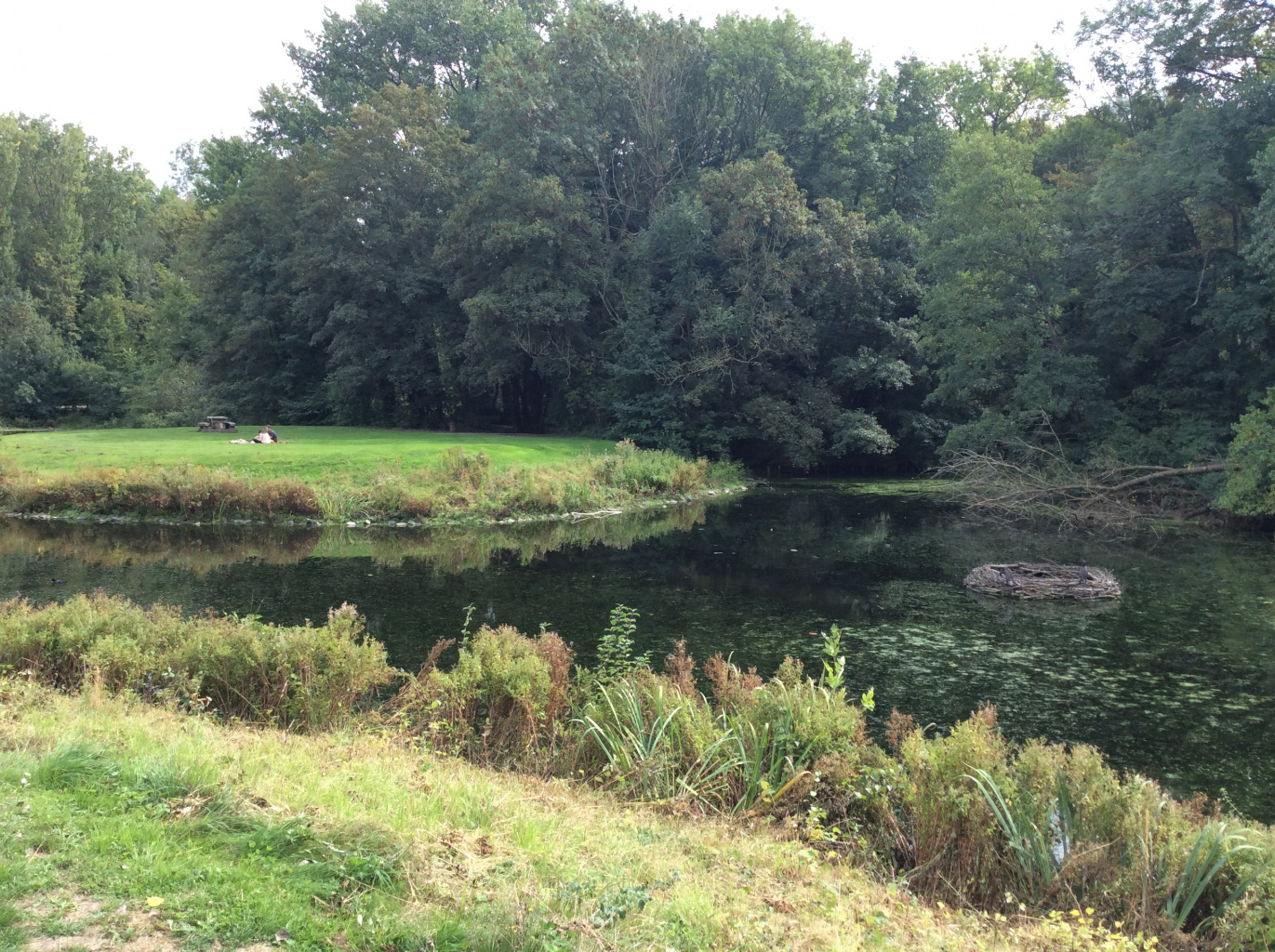 The combination of modern architecture, rich in cultural heritage and the beauty of the Lille’s nature gives you a sense of harmony in the park of the nearest suburb - Villeneuve d’Ascq, which houses Lille Museum of Modern, Contemporary and Outsider Art (Lille Métropole Musée d'Art Moderne, d’Art Contemporain et d’Art Brut, LaM). Walking among the fields and meadows, you can see a Picasso sculpture or a heron’s nest, visit an exhibition or the Mill Museum (Musée des Moulins).

From Lille, it is convenient to make cultural tours of the neighbouring cities like Belgian Ghent and Bruges or and French Reims and Amiens. All of these places highly recommended by guidebooks are located just an hour and a half drive from Lille. 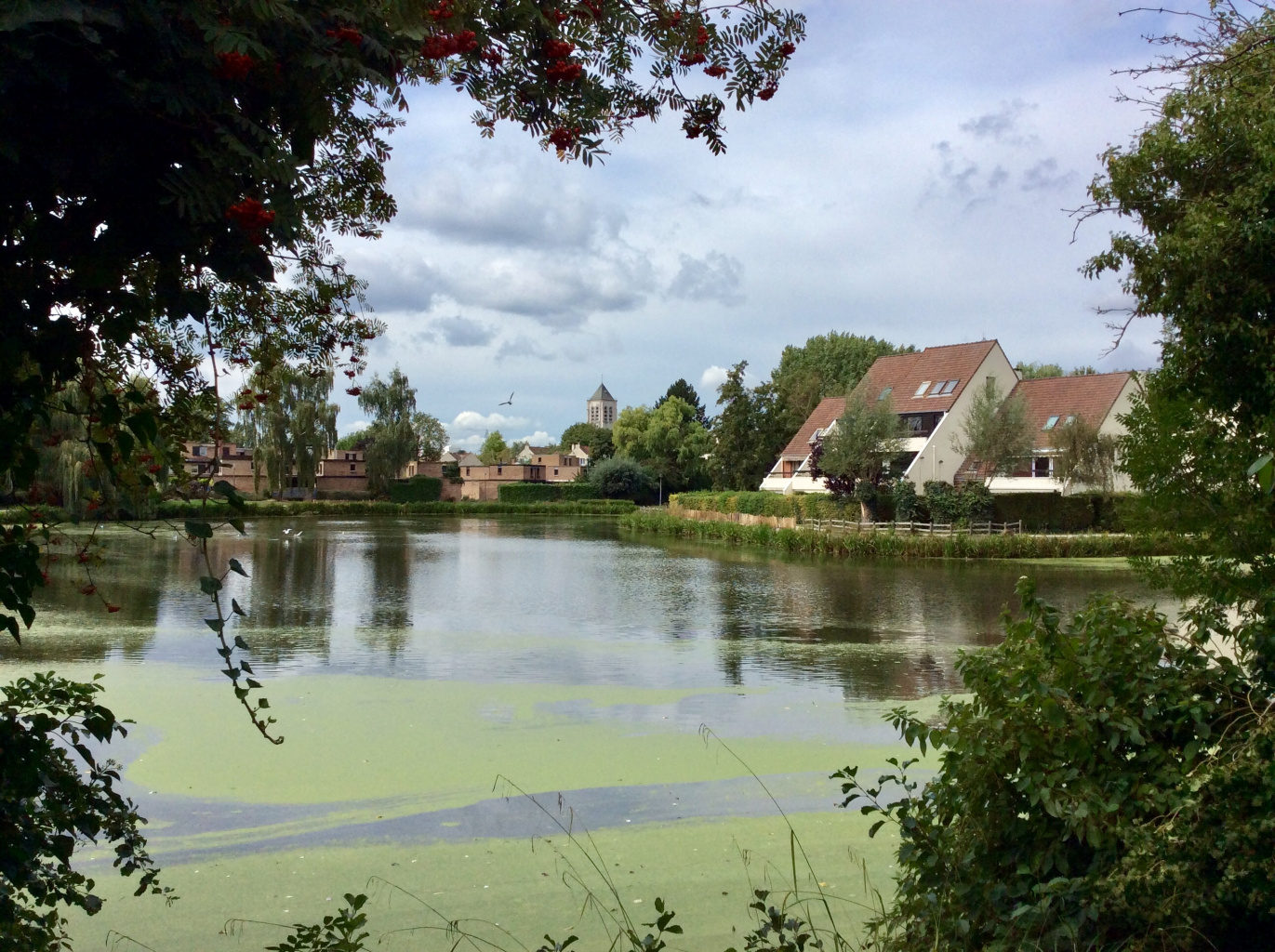 Since Lille was named the European Capital of Culture in 2004, major cultural events have been held here. Among the many events, one can single out the jazz festival taking place in the suburbs of Tourcoing, and it attracts musicians from all over the world. Every two or three years, there are crowds of guests in the centre of Lille who come to enoy this amazing performance. This year, the festival’s theme was “Utopia”; the statues of green people were throughout the city, giant fish swam across the sky, space creatures walked around, the heroes of “Alice in Wonderland” were replaced by musicians and dancers.

Very soon, there will be another reason to visit Lille as the Lille Flea Market takes place every autumn, which is one of the largest and most colourful ones in France.

Photo Courtesy of the author