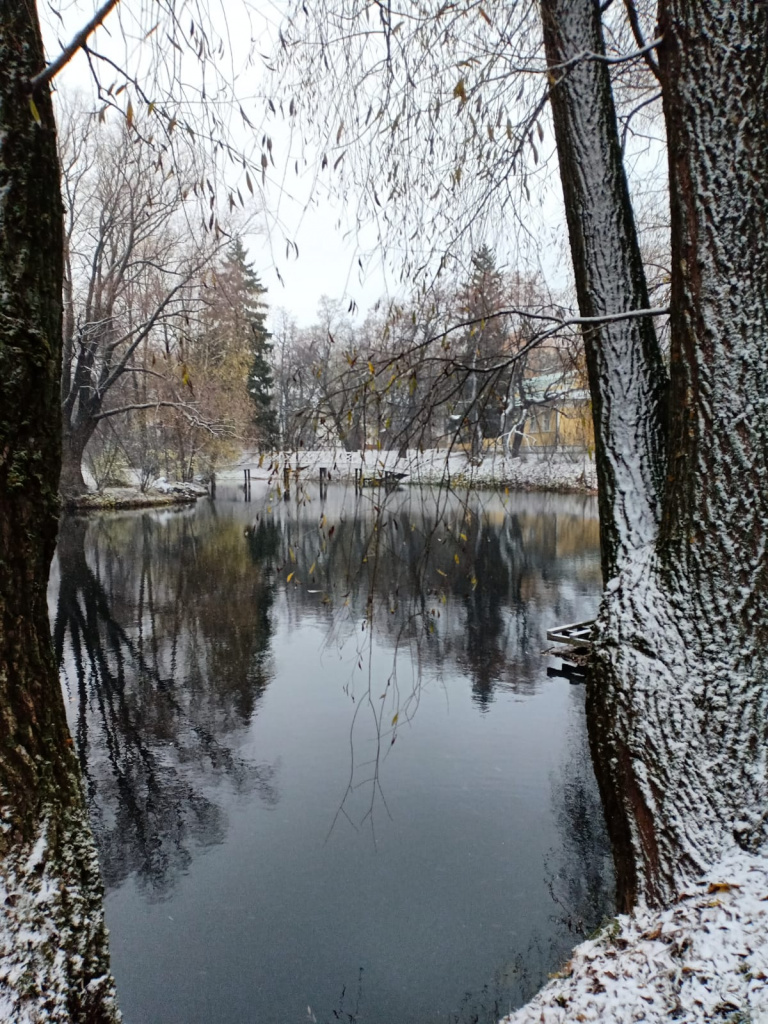 The lovers of the Russian culture have no doubt that Alexander Pushkin is one of the most important - if not the most important - person in the Russian literature. Every schoolchild knows about his family estate in the village of Bolshoye Boldino, and this village and the “Boldino Autumn” are, certainly, the iconic symbols of the Russian literature not only for Russian readers. Those who have never been to Boldino, nevertheless, can imagine a small manor house on the banks of a pond, a “humpbacked” bridge and the “crimson” leaves surrounding it all. Autumn is the right time to go to the Pushkin’s ‘paradise of creative solitude’. The poet, stuck by a twist of fate here once in autumn, returned to Boldino twice in search of inspiration. But during the later visits, the poet did not write in Boldino as much as he created during his first stay in this place. 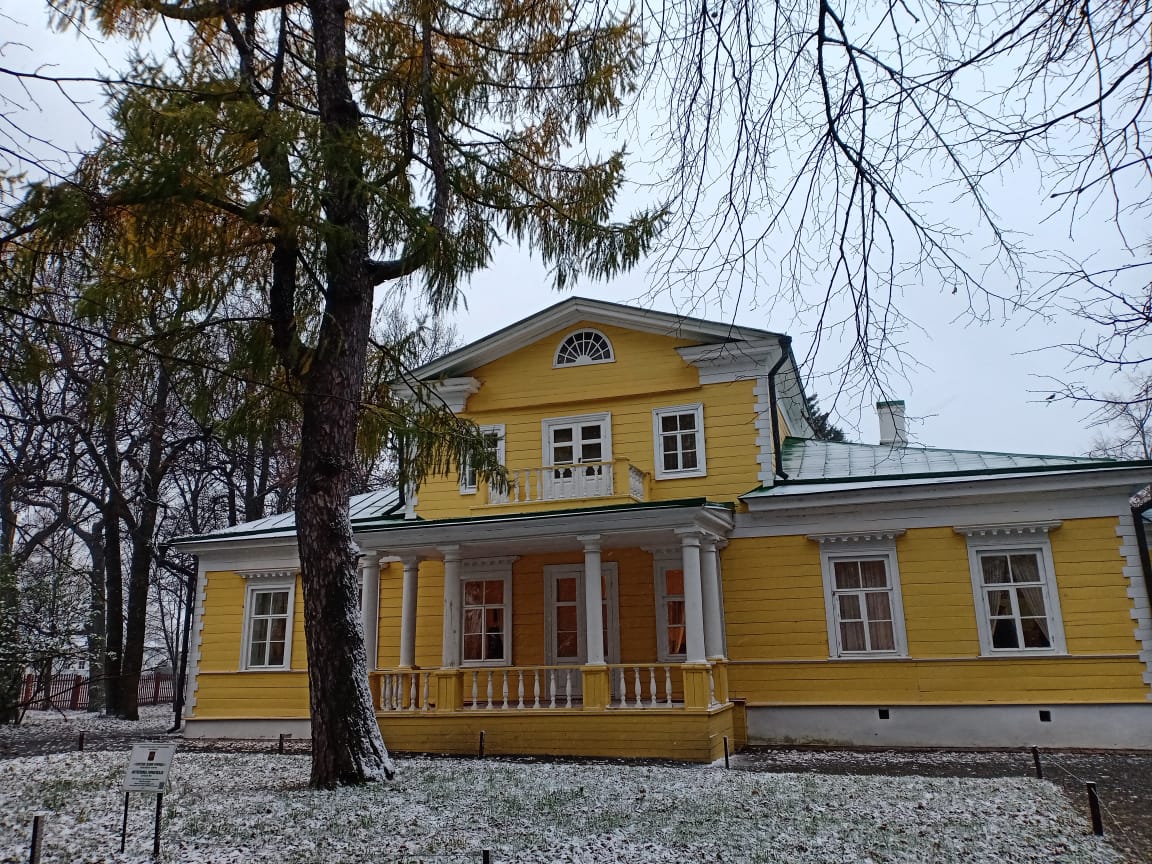 We also went to the Boldino village. Having visited the Zakharovo and Mikhailovskoye estates cherished by the Pushkinists and the state, as well as the apartments on the Moika River embankment in St. Petersburg and in Arbat Street in Moscow, travellers expect to see something similar in this place, which must be another mecca for admirers of the talent of ‘our EVERYTHING’. Moreover, of all the Pushkin family’s estates, only the Boldino estate has never been destroyed, the original manor house has been preserved. In addition, the official website of the Bolshoye Boldino Museum is quite worthy of praise. So, we started planning our trip.

The first difficulty we faced and, in fact, the most important one, was a transport inaccessibility. We studied the map thoroughly, and finally, we chose the city of Nizhny Novgorod as a good place to start our trip to Boldino. And to tell the truth, it takes only 4 hours by the Lastochka (Swallow) express train from Moscow to Nizhny Novgorod. But it was not easy to get to the Pushkin places from Nizhny Novgorod.

There is no railway connection with Boldino. It’s hard to believe, but direct buses don’t go there, either. You can get there travelling with many stops and changes only. Looking ahead, I can tell that the Boldino Museum workers advised their friends to go via the city of Arzamas. However, this way adds 130 km more.

So, we decided to rent a car in Nizhny Novgorod. It’s good that we rented a jeep. At first, everything went fine, but the closer we got to the Boldino village, the worse the road became. When it was about 120 kilometres to our destination, the road became bad at all. The potholes were so wide and deep that I had to drive using the opposite lane. Every time when trucks emerged head-on from the autumn fog, I had my heart at my heels. We immediately recalled the lines of the poem “Demons”, the first of the poet’s poems created in Boldino: “It’s all that scary against your will / Among the unknown flatland!” - these lines were about our feelings ... 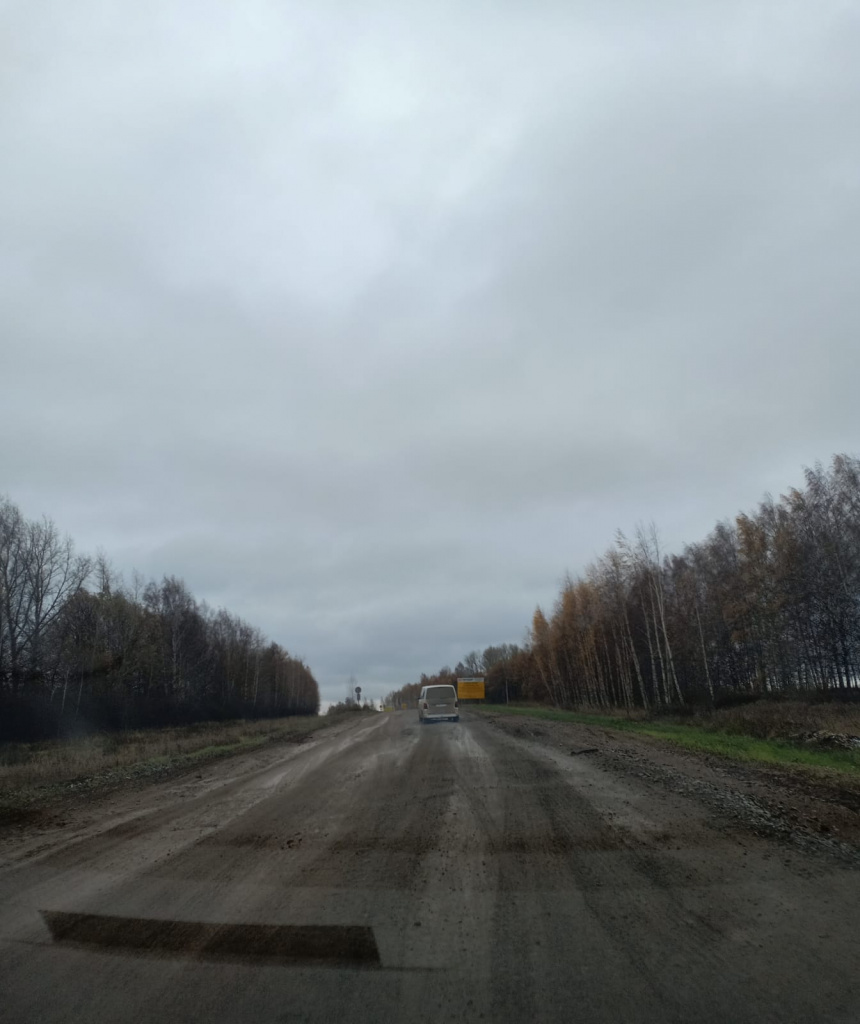 To be honest, such a situation was simply shocking. After all, several festivals of federal significance were held at the Boldino Museum and Reserve, high-ranking cultural officials visited this museum, how did they travel along this rough road? Have any “top officials” visited the Boldino Museum? Of course, the Bolshoye Boldino village can be considered an important cultural object and the lack of access roads is a barrier. But still, for some reason, I could not believe that this was a negligence, it was rather a tactic.

Closer to the Boldino village, a small helipad was seen. You may ask how many visitors come by helicopters to this Pushkin’s place. Not so many. Apparently, only those who take care of a suspension of a ‘car with a light bar’. Olga Lyubimova, Minister of Culture, came to Boldino in December, 2021 (we don’t know exactly how she got there). According to the Boldino Museum workers, she said about the poverty of the exposition, promised the government’s support for the Boldino development project. I really hope that the minister has put in a word for an access road talking to those who are responsible for this. After all, transport accessibility is among the main components of the investment attractiveness.

Gleb Nikitin, Governor of the Nizhny Novgorod Region, promised in 2021 to improve the transport accessibility of the area. He pinned his hopes on the M-12 highway that is under construction (Moscow - Nizhny Novgorod - Kazan), saying that trips here should become “as comfortable as possible”. But there are still an 80 km long road from the highway to the Bolshoye Boldino village that needs to be paved.

In two years, in 2024, the 225th Pushkin’s anniversary will be celebrated. The authorities’ promises to improve Boldino and implement the projects for creating the comfortable urban environment are tied to this anniversary celebration.

In the meantime, there is a huge, fenced-in house with empty windows located next to the museum complex and it looks more like a once rich estate and not like the modest Pushkin’s manor house; it used to be the House of Culture. Its renovation was also planned but there are still no roads, no restaurants, no cafes nearby. In March 2022, the only operating hotel was put up for sale, since the municipal budget cannot afford any investments in its renovation. They say, there are no buyers yet. 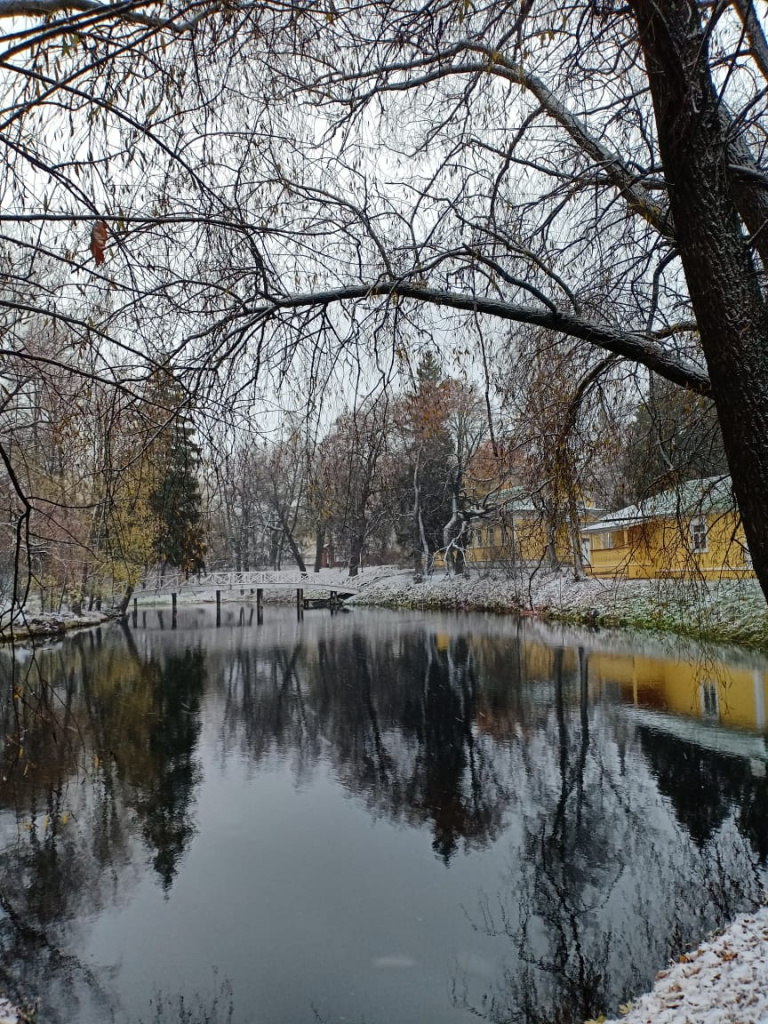 Although, I must say, there is some kind of harmonious ‘Russian invariableness’ in this hopelessness. There is the Pushkin’s house in the village, a small park behind a fence surrounds the manor house, a larch tree planted by Alexander Pushkin grows near the house and there are also many huge trees (of his age), as well as the poet sits on a bench thinking and the restored stone Church of the Assumption built by the poet’s grandfather proudly rises next to the square - this Church was consecrated in the year of the poet’s birth. Everything is just as gloomy and miserable around the estate as in the Pushkin’s days, and dirt is “knee-deep,” as the poet wrote. 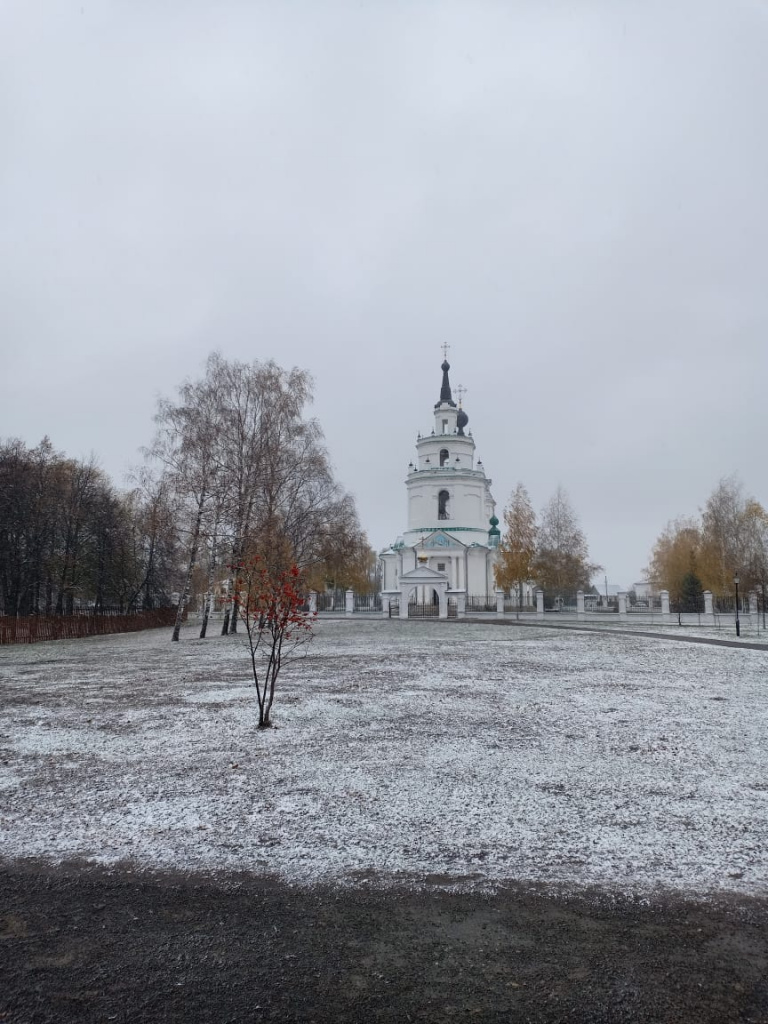 The park is surrounded by five-storied buildings instead of small log houses, nobody takes care of preserving the landscape of the Pushkin’s heritage although the Bolshoe Boldino village is included in the list of historical settlements of the Nizhny Novgorod Region. And this status implies the approval of town-planning requirements. 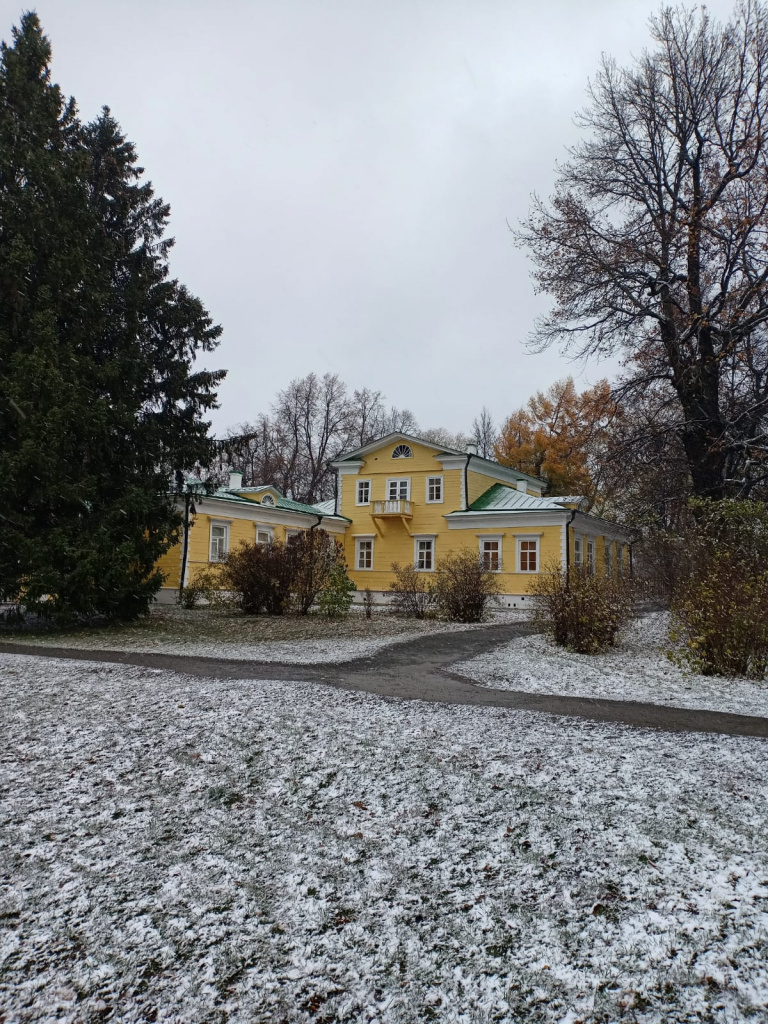 The poet wrote about Boldino to his friend Pletnyov: “... what a charm this village is! Imagine: steppe lies everywhere; no neighbours; ride as much as you like...” Already on the way, you feel like ‘tumbled into oblivion’, half way between two ‘nowheres’, really in the middle of nowhere. The area here is incredibly picturesque with vast cultivated fields around, high hills, and the “forests clad in crimson and gold” ... In Boldino, of course, you also expect to see the landscape described by Alexander Pushkin, but instead, you are in a kind of urban-type settlement, with souvenir shops and almost complete lack of hope. 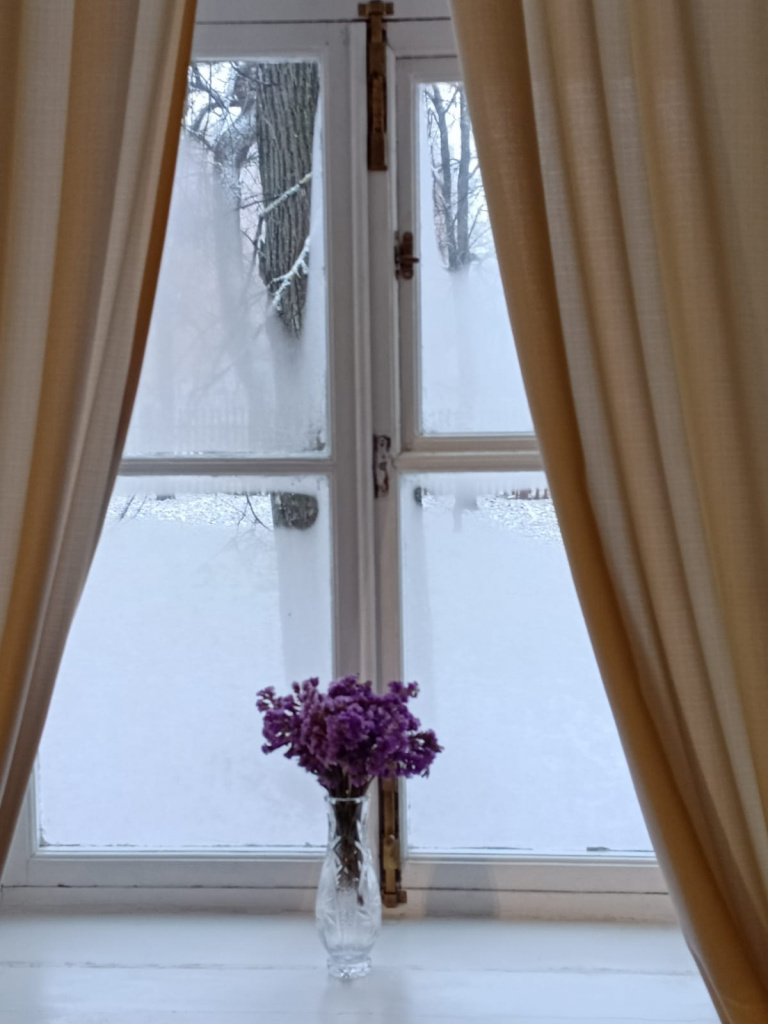 The Boldino Museum workers told us that some of the Pushkinists “managed to bring potential investors from Switzerland to Boldino”. But unfortunately, it was raining and muddy. The potential investors looked around and decided that it was impossible to develop the tourism business in Boldino. So, they said, “it’s impossible”, it looked as a godforsaken place, there was nothing to invest in. It is so sad for Boldino, for Pushkin’s heritage and for the Russian culture when ones hear this story. Roads are urgently needed in Boldino. I would like to hope that Boldino will never run out of ‘crazy enthusiasts’ ready to drive along bumpy roads from Nizhny Novgorod for four hours one way. After all, Pushkin is our ‘EVERYTHING’ that makes us who we are.
# Nizhny Novgorod ,Boldino,Pushkin,Russia
More