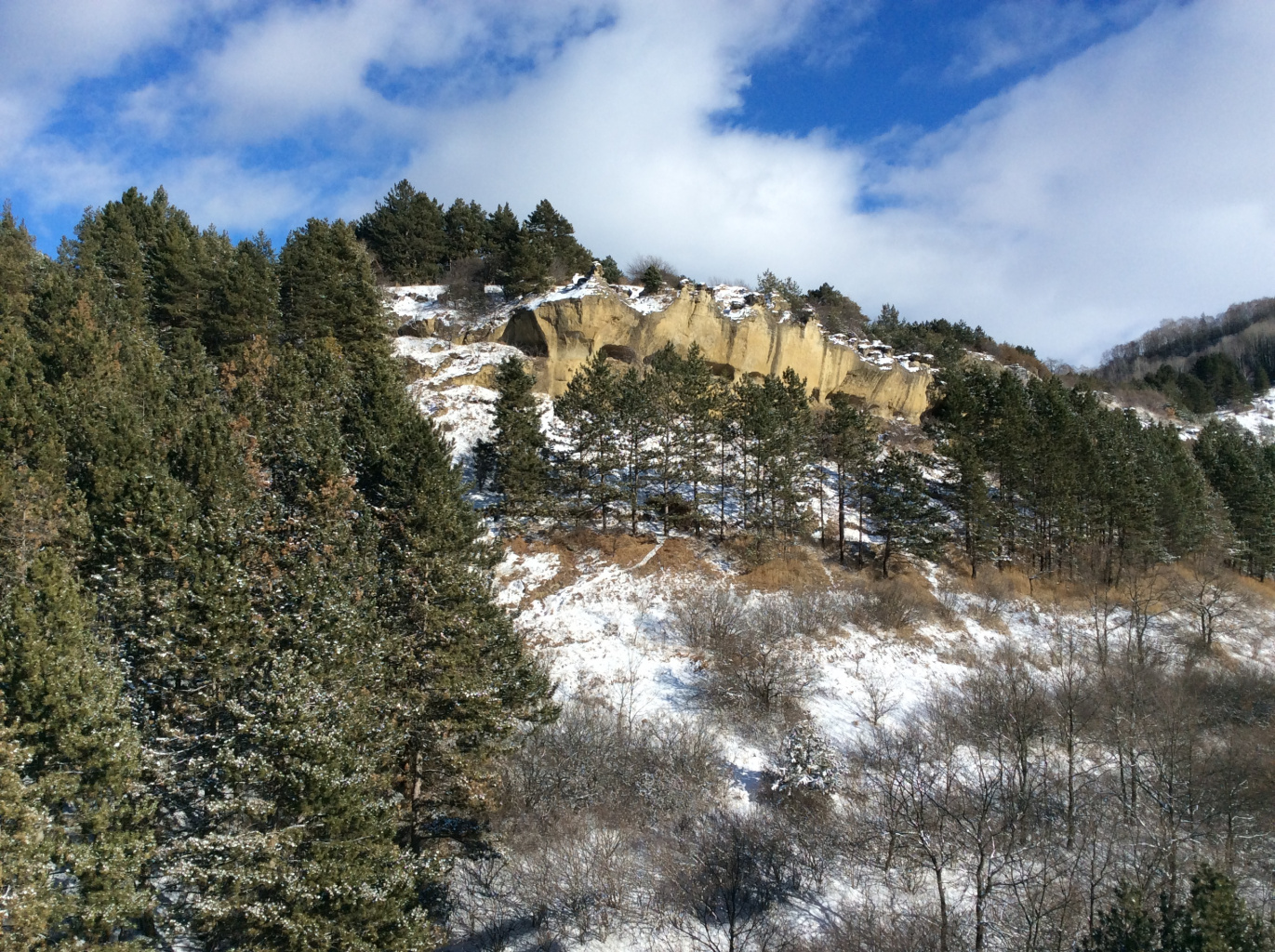 It is no secret that it is comfortable to relax in Kislovodsk at any time of the year due to the good climate, high-quality spa treatment (Sanitas pro Aqua) and a beautiful park with year-round terrain cure paths. But most tourists still prefer a warm season, when the Valley of Roses blooms and fountains sing. I visited Kislovodsk in winter and I want to share my experience - the pros and cons of such a vacation.

The first reason people go to Kislovodsk is, of course, its mineral water. The visitors drink mineral water narzan, use narzan baths and even do narzan inhalations. The beneficial properties of narzan largely predetermined the future of Kislovodsk as the most famous balneological resort in Russia or, as it is often called, Russian ‘Baden-Baden’. 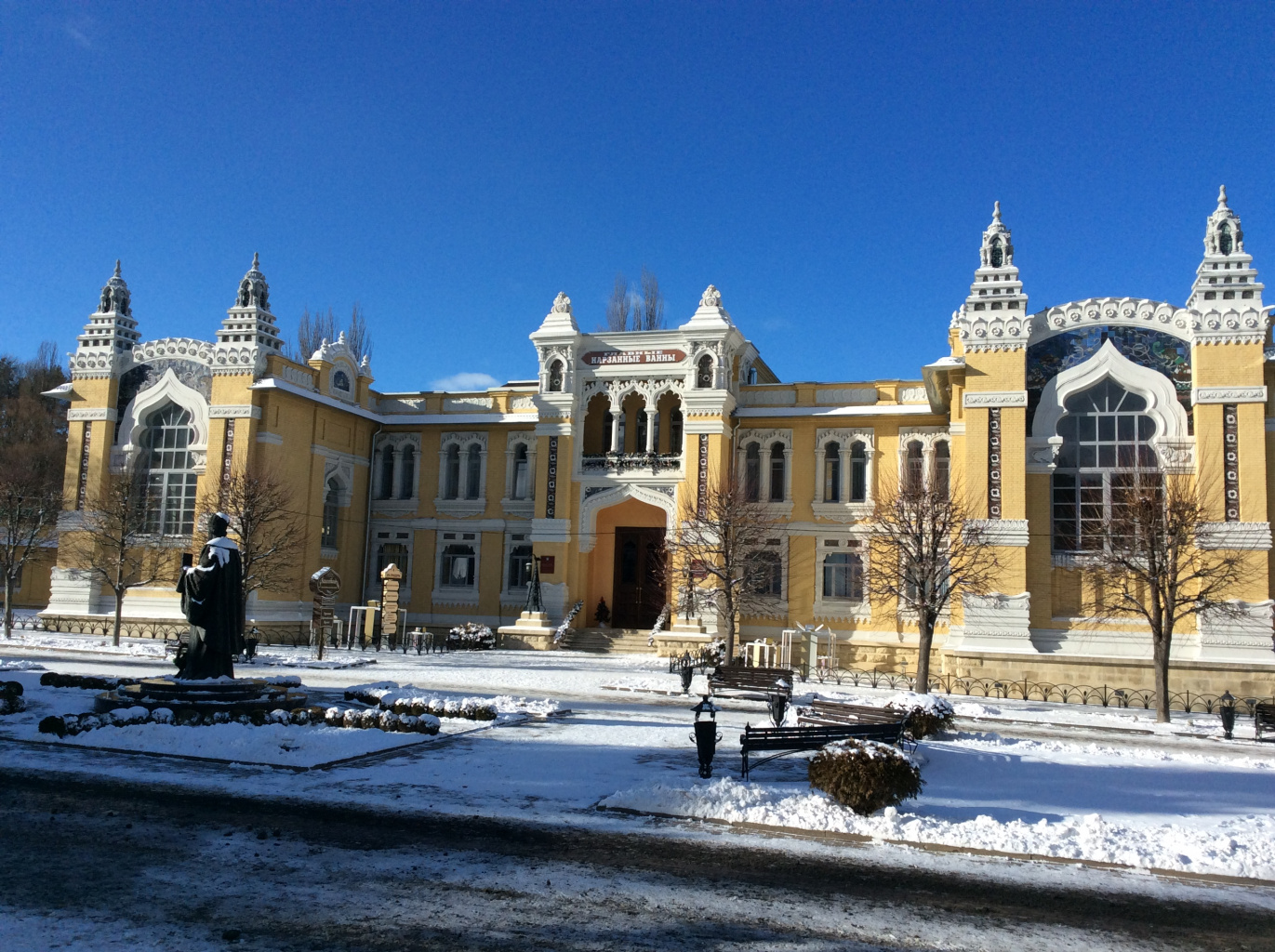 Meanwhile, the narzan mineral water, mountain air, and 300 sunny days a year are far from all that attracts tourists to this resort city. The ‘crown jewel’ of Kislovodsk is a completely man-made National Park, the creation of which began in the 1820s. The first trees were planted in the Park by the General Yermolov’s soldiers just a few years after the appearance of a fortress in this area, which housed the Russian garrison. 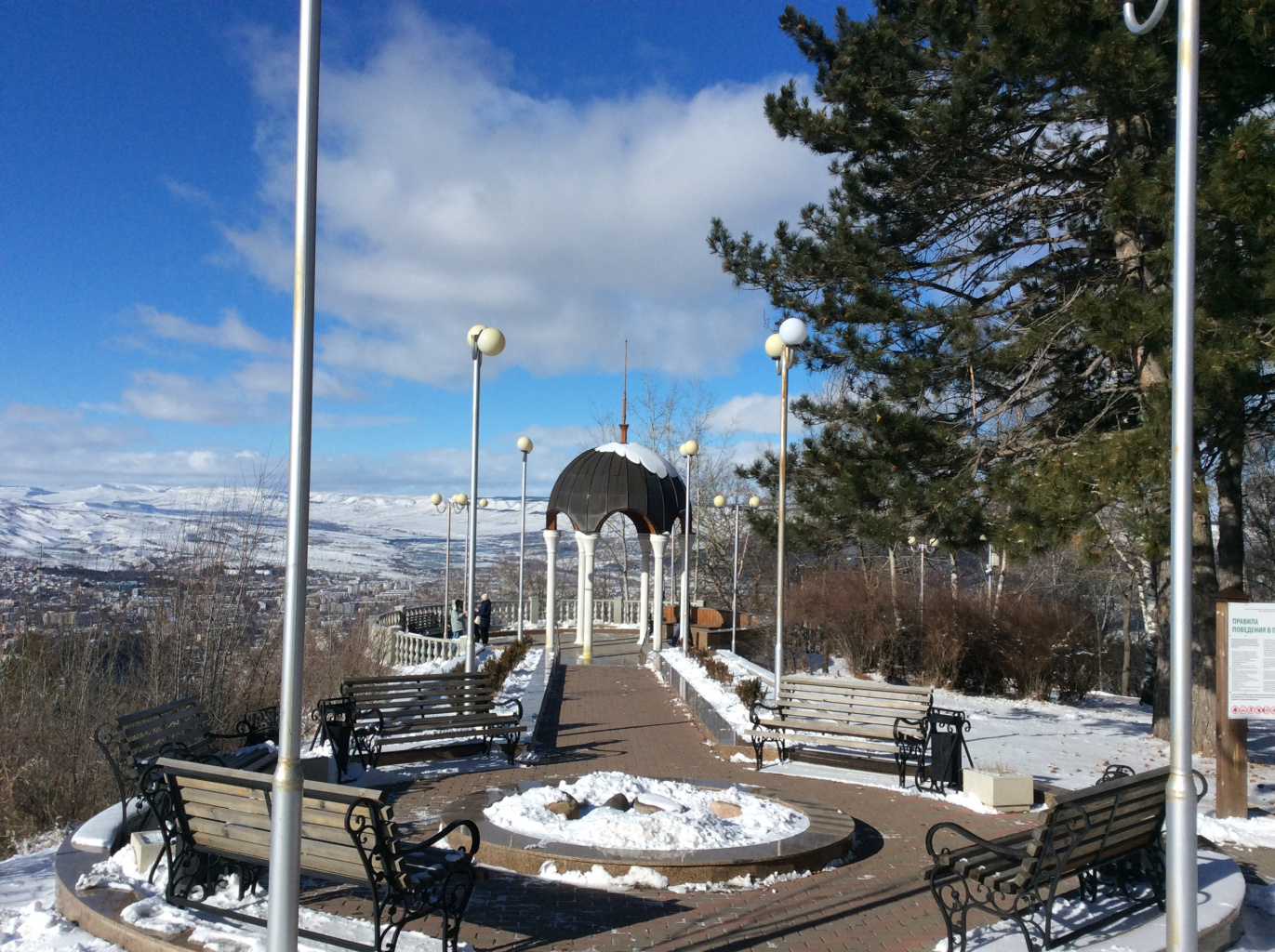 It is hard to imagine that the mountains covered with trees today were mostly leafless at that time, and the local soil was too poor for planting. Young trees, shrubs, and seeds were brought to this place, as well as the fertile soil. The seedlings were brought from the Crimea and Western Ukraine, Tiflis, and Riga. Chestnuts and poplars, pines, cedars, spruces, firs, oaks, birches, and ash trees were planted in the Park and on the hillsides ... At the beginning of the 20th century, the Pine Hill was planted with trees. Today, over 1 000 different plants grow in the beautiful Park, and wide and comfortable paths are laid along the slopes of the mountains. 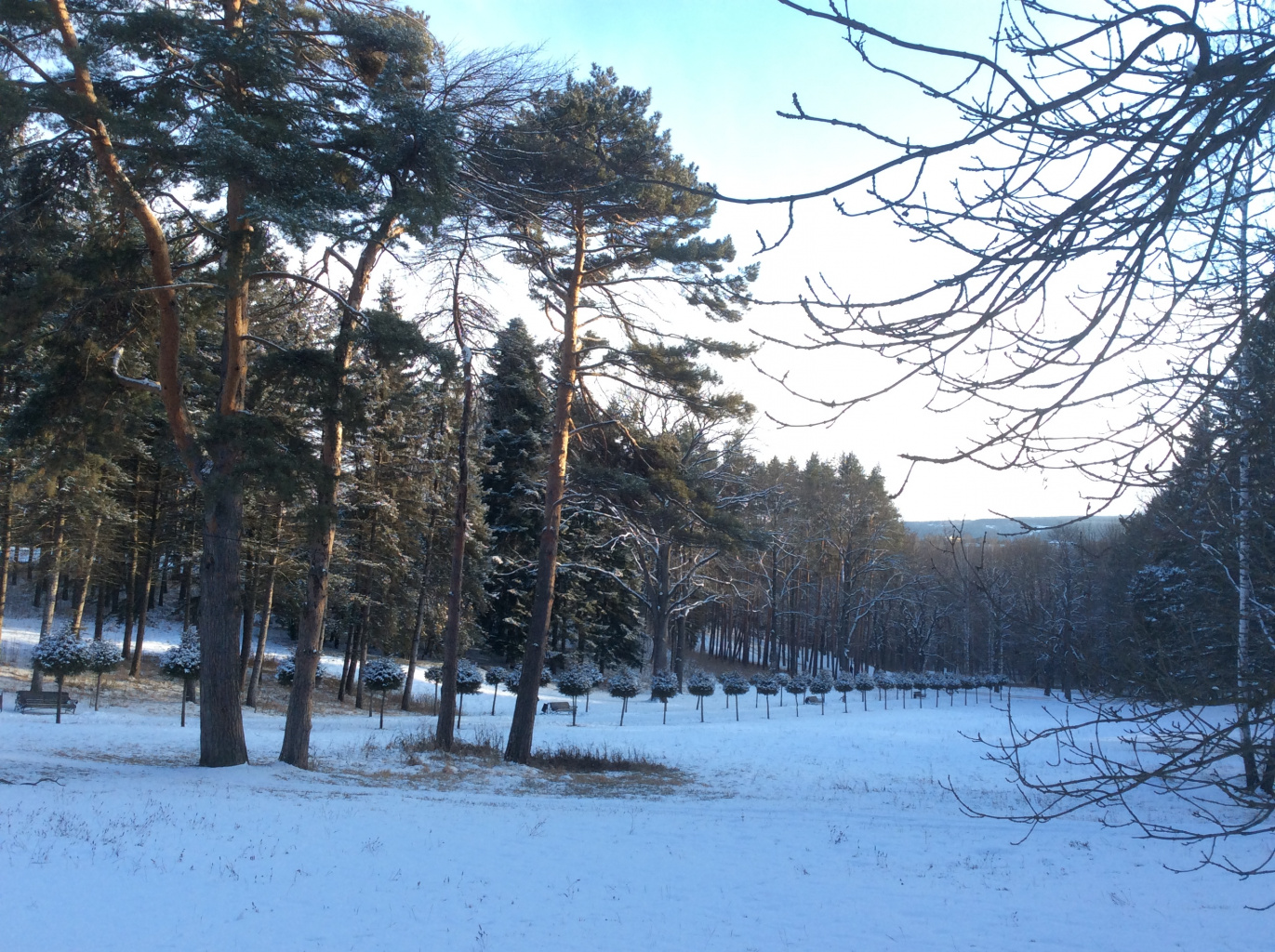 In order to get at least the slightest idea what Kislovodsk looked like without lush vegetation, local guides recommend to watch the film “A Hero of Our Time” (1965); at that time, the upper Park did not yet look like it looks today, as well as to visit the Russian painter Nikolai Yaroshenko’s museum-estate located on the Park’s border and enjoy a unique collection of his paintings depicting the views of the surrounding places.

And, of course, it’s better to come to this city in winter when most of the trees are leafless and the mountains are seen better. Another ‘winter’ advantage of Kislovodsk is that in winter, there are much fewer vacationers than in the warmer months. At the same time, we who live in the Central Russia can only partly call January in Kislovodsk a real winter month. Arriving here, we found grass and very little snow, a few ‘islands’ of which remained only in the shade of trees. The sun was shining bright and breath of spring was felt in the air. However, by the end of the month, winter showed its ‘temper’, although real snowdrifts appeared only in the upper Park in the mountains. 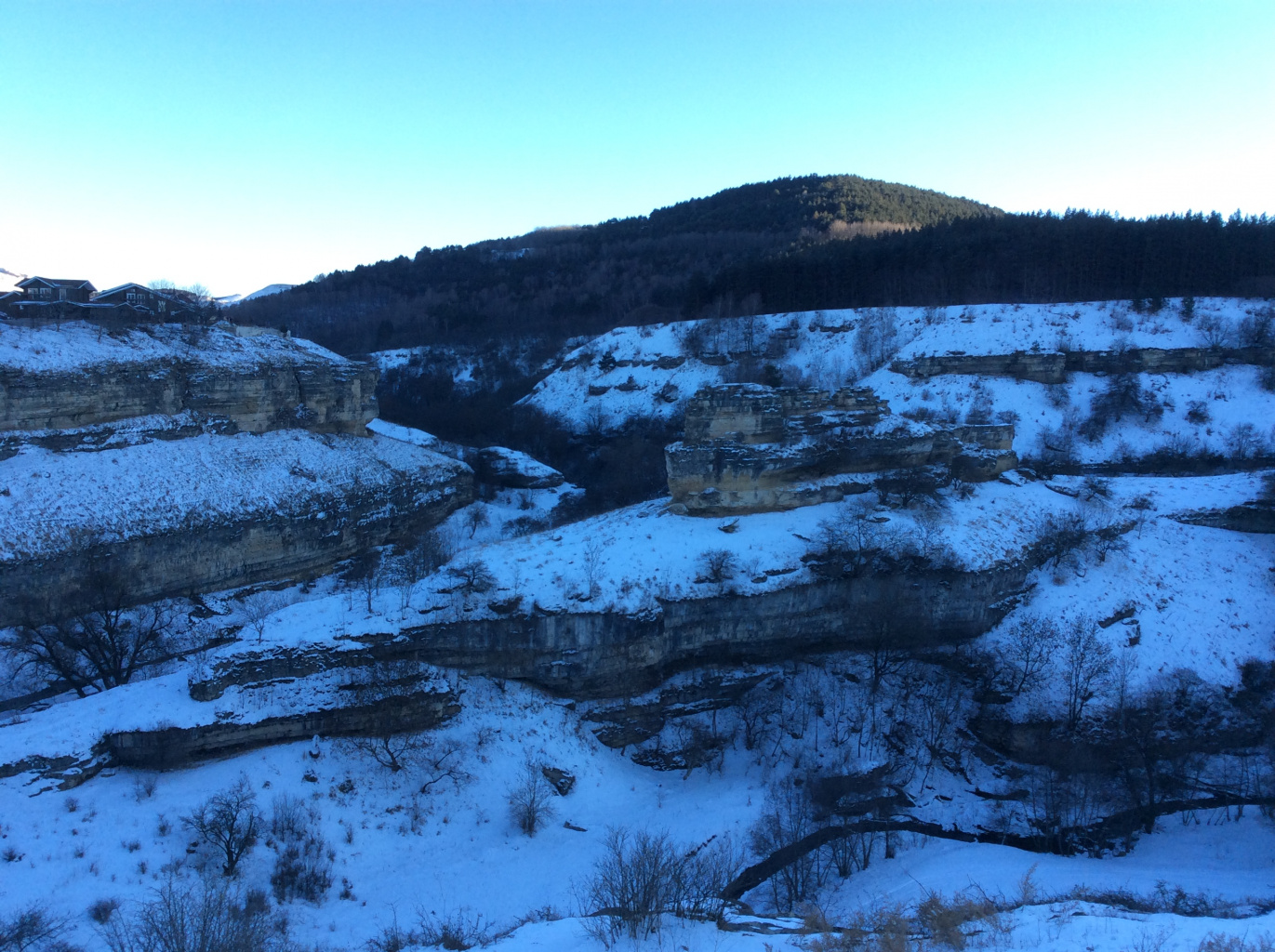 The only really unpleasant thing in winter is frost on the paths of the Park, which is caused by sharp frosts and a difference in day and night temperatures. This can make long walks difficult and also lead to very unpleasant injuries. The Park’s employees simply do not have time to sand all the many kilometre long paths of the upper and lower parts of the Park.

From the Red Sun to the Blue Mountains

And there is really enough space for walking. If you stay at the hotel in the city centre, any walk would start from the magnificent Kurortny Boulevard with the buildings of the Narzan Gallery in the English Gothic style and the Main Narzan Baths with the Indian motifs in the architecture coexisting with Moresque ones. People come here not just to drink narzan and take a bath (this can also be done in resorts and health centres) but also to enjoy the resort life with its regularity, promenades and simple entertainment. 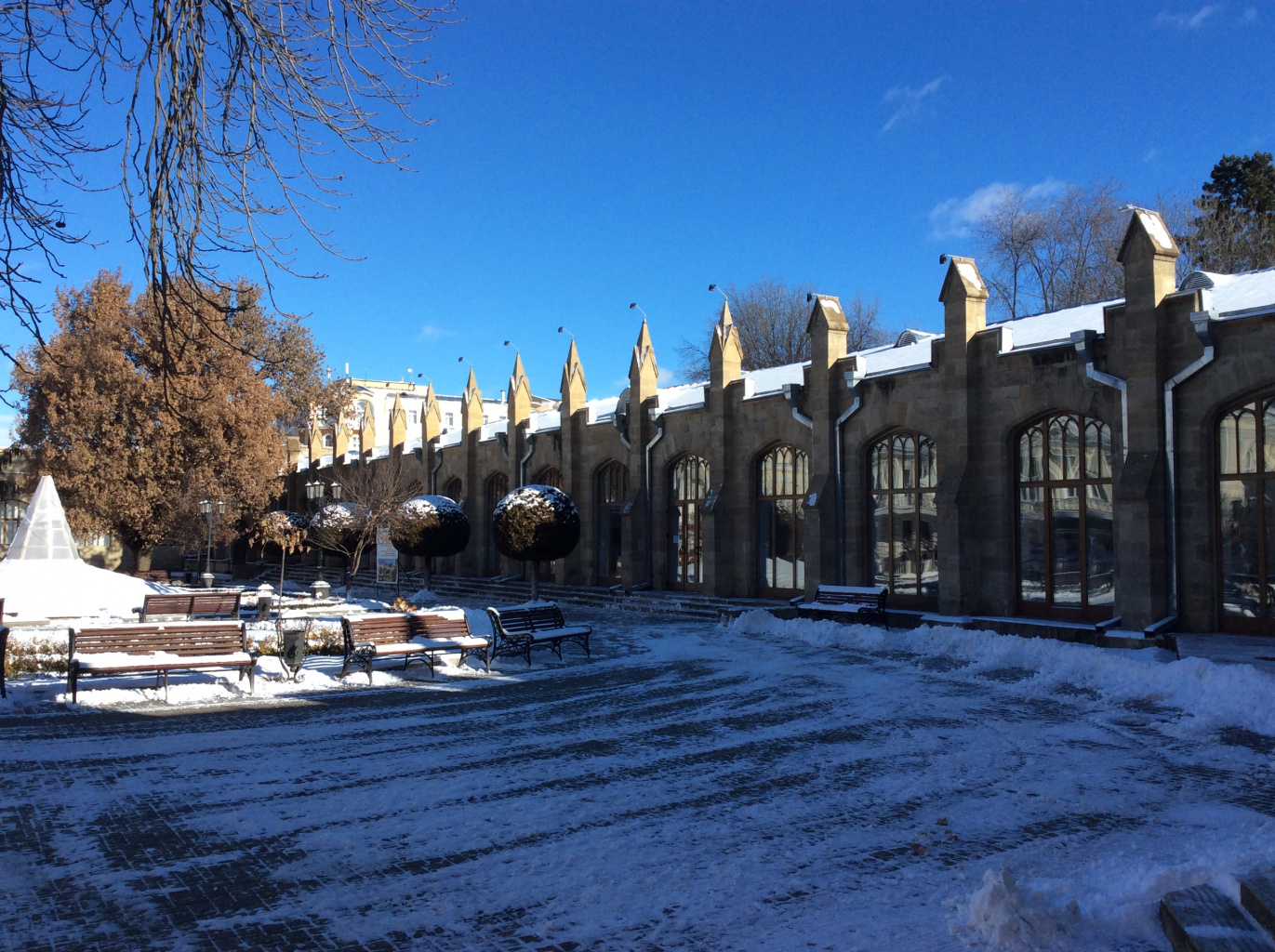 The architecture of Kislovodsk is quite eclectic, but the city centre looks beautiful with its amazing restored buildings, including the Art Nouveau Kursaal, the white-stone Colonnade, as well as the Chaliapin’s dacha (summer house), the Grand Hotel building, and mansions of the late 19th century. 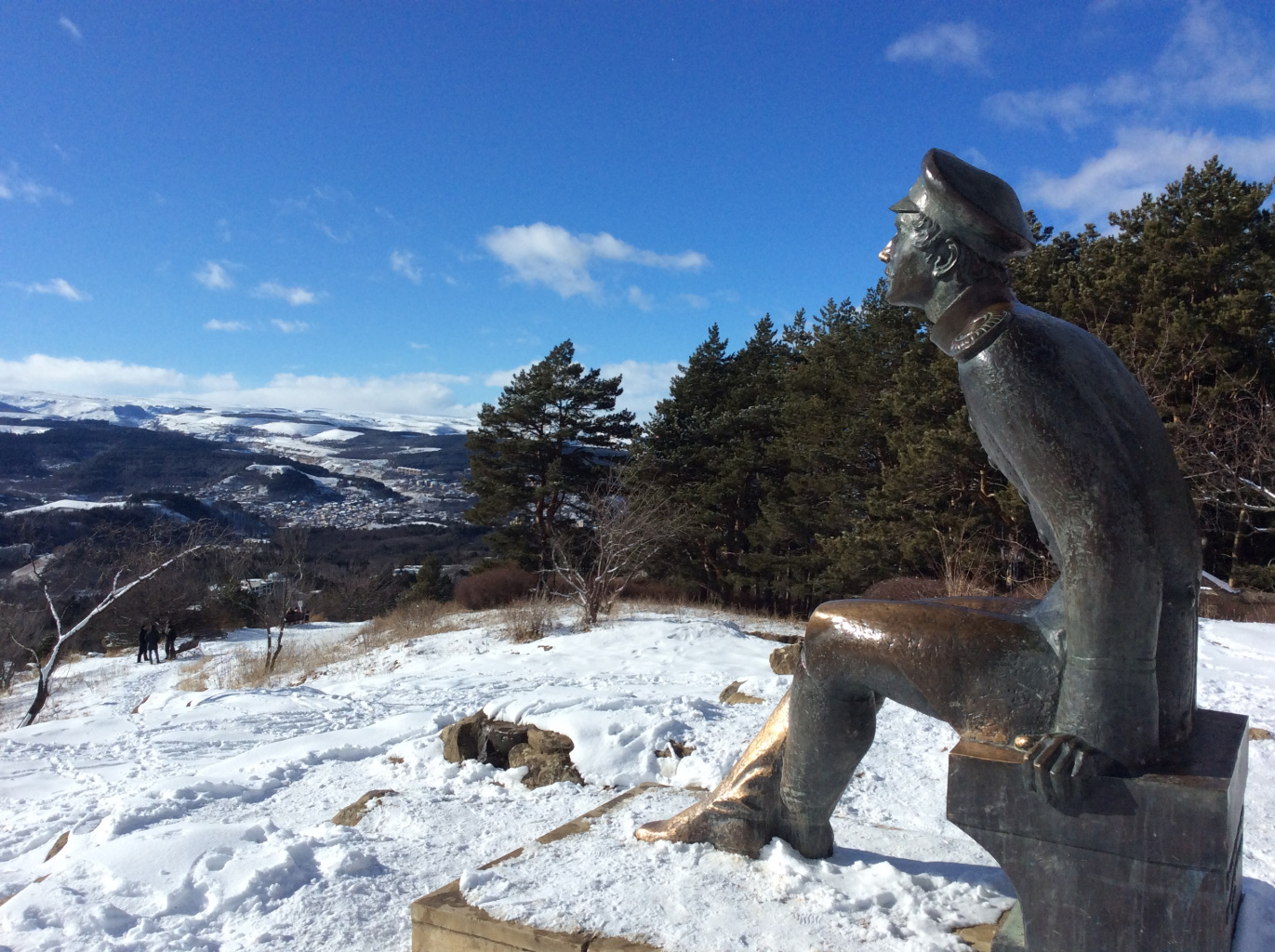 The Kurortny Boulevard smoothly turns into the Kislovodsk Park, where the visitors find themselves rushing to the towering flights of stairs of the Lermontov square and the gloomy grotto with the “sad Demon, the spirit of exile” suffering here. In Kislovodsk, a lot is connected with the “Hero of Our Time” by Lermontov, for example, the Lermontov rock looking like a ship - the place of the duel between Pechorin and Grushnitsky, the Lermontov waterfall ... The writer liked these places and often came here to admire the waterfalls, rocks, and mountains. A monument to Mikhail Lermontov was built on the Mount Red Sun. The poet seems to be peering into the distance, where the outlines of the ‘gray-haired’ Elbrus appear. 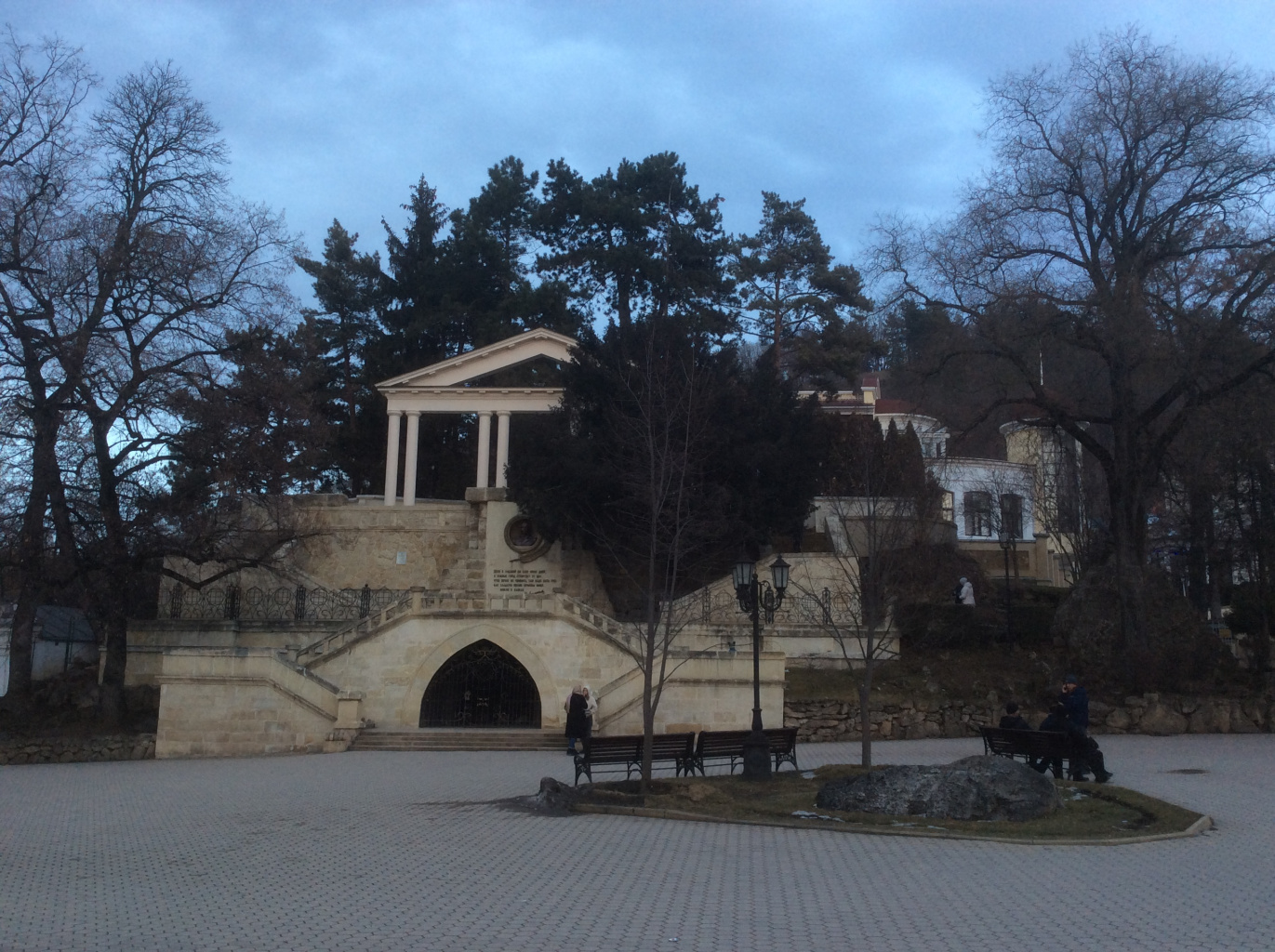 In clear weather, you can see the snow caps of the two-headed Elbrus much better if you climb higher from the Red Sun - to the top of the Blue Mountains. However, if it seems too steep to climb up, then it takes you just 10 minutes to get there by cable way, the lower platform of which is located next to the Temple of the Air located directly above the Rose Valley. 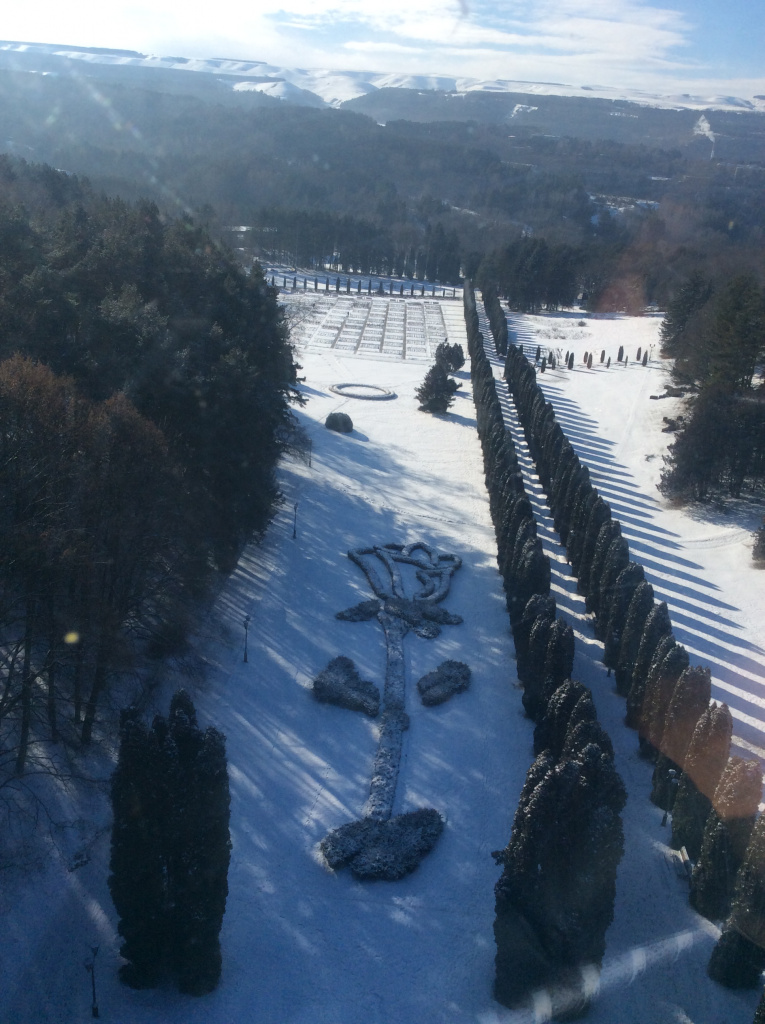 On the top platform of the cable way located at the top of the Blue Mountains, there is the Olympic Complex, from which the road to the nearby peaks begins leading to the Small Saddle and the Big Saddle. From the Small Saddle, the most stunning view of the mountains and the surrounding area opens. 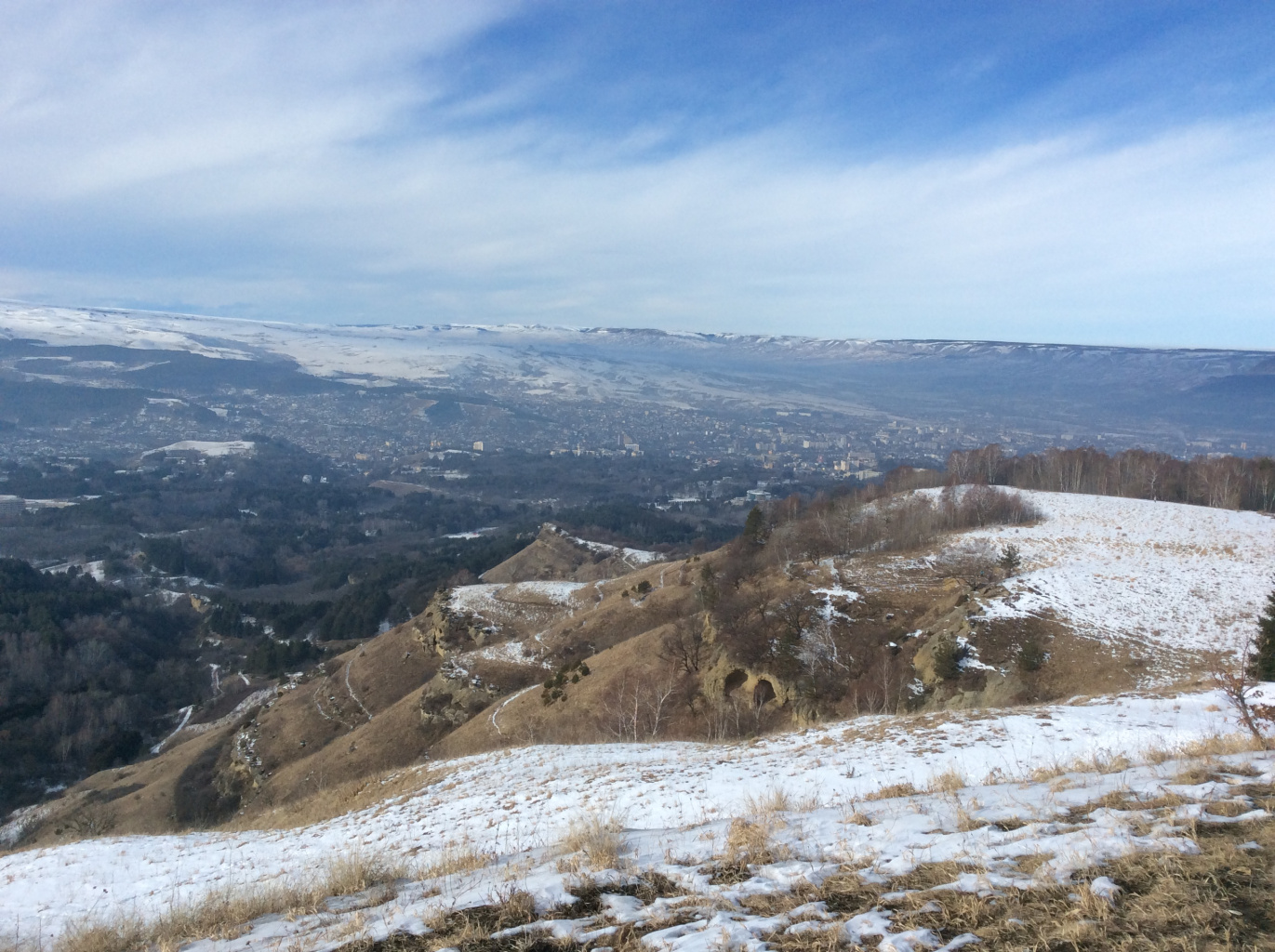 At the same time, the path to the Big Saddle is an exciting adventure with numerous ups and downs. 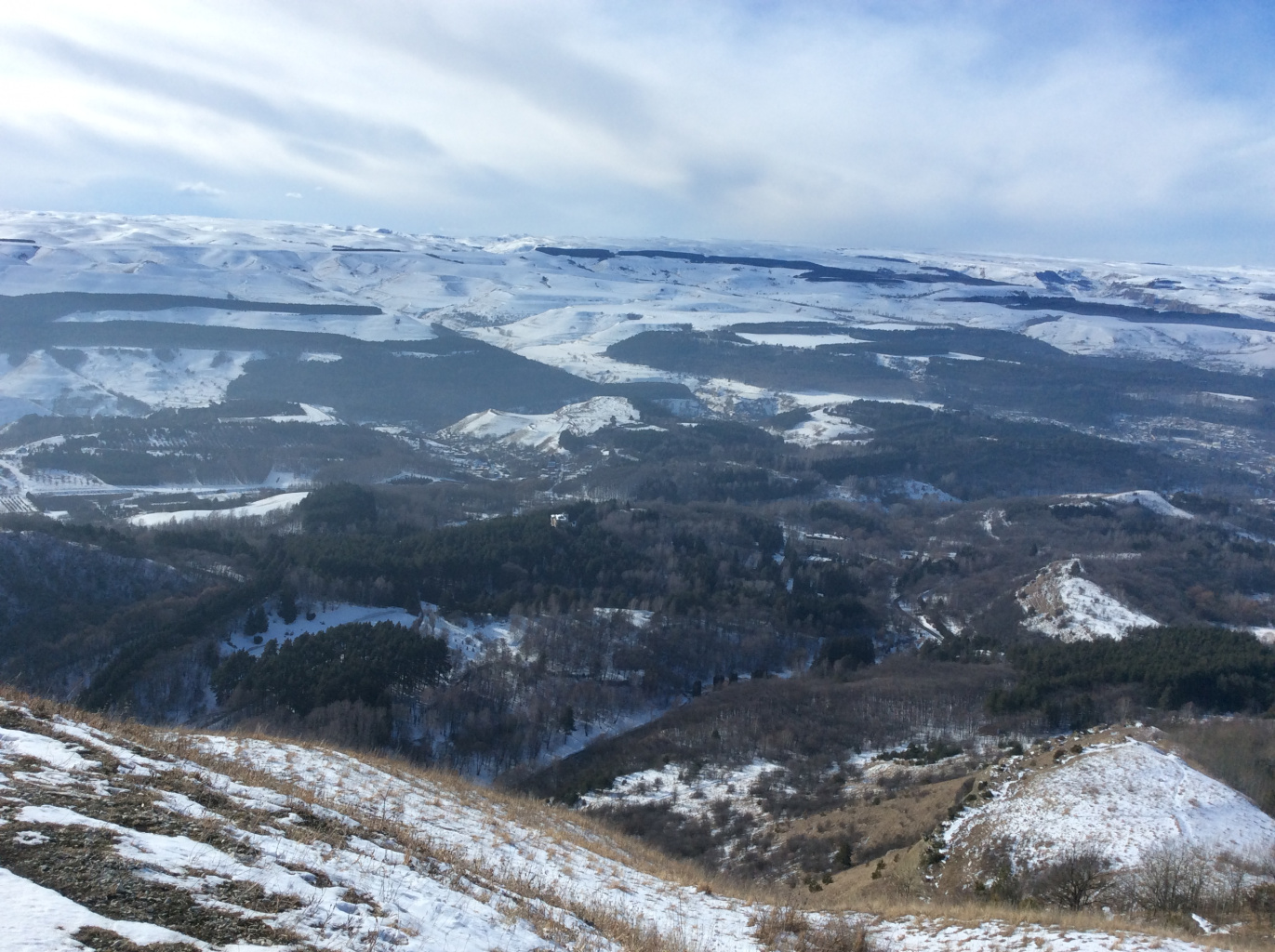 Despite the fact that there are no restrictions for such a walk in the mountains - neither by age nor by physical fitness - you need to keep in mind that the descents and ascents, some of which are rather steep, can also be slippery in winter. We can say that we were lucky because on the eve, it was snowing a little, and it was not slippery. But on the other hand, by about the middle of the route, I got my boots full of snow - the higher you climb, the more snow in the boots. 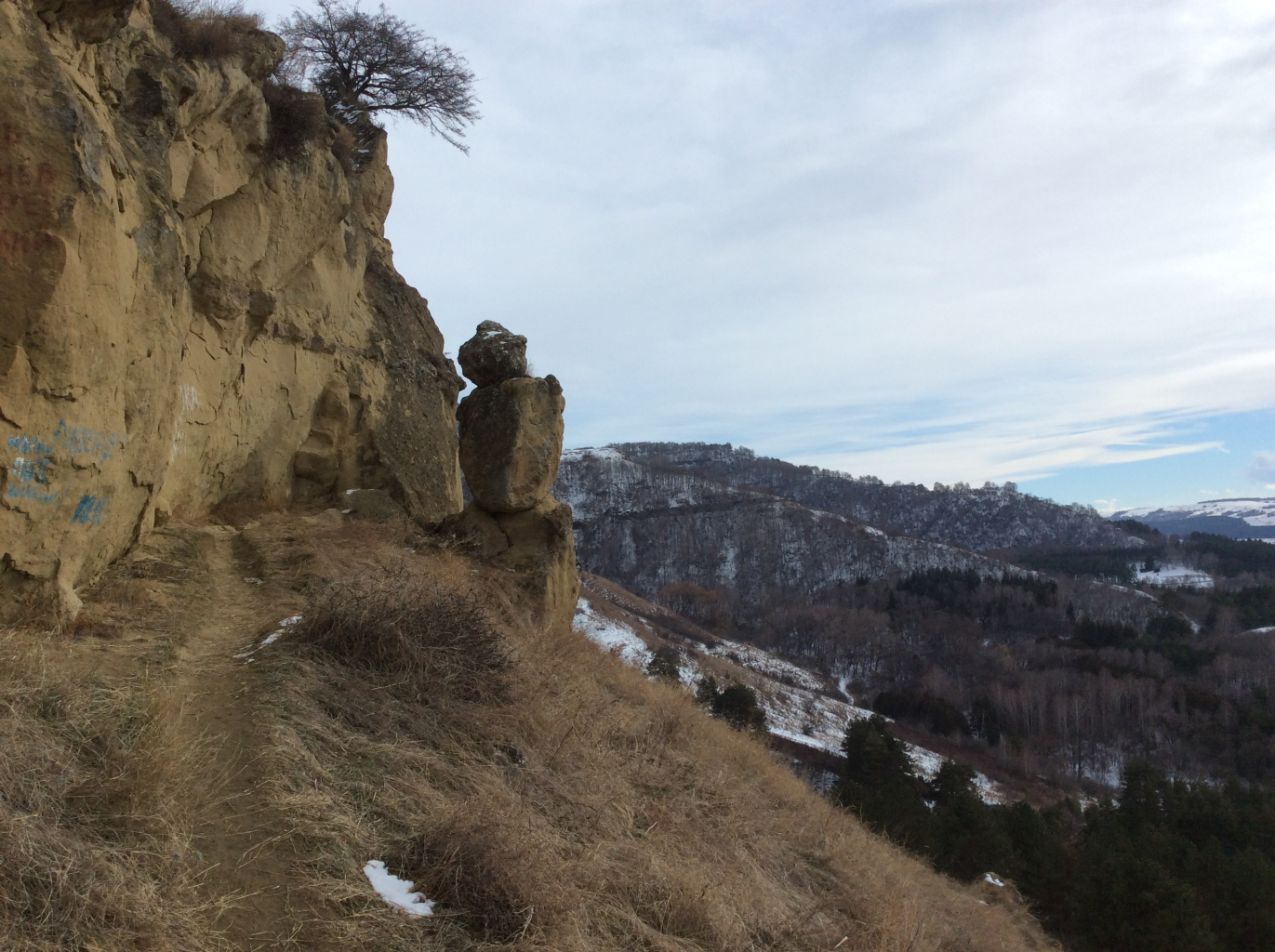 Meanwhile, the charm of the Kislovodsk Park lies in the fact that all travellers can find a route here according to their liking and which they feel equal to. In the lower Park, wide alleys run past grottoes, bridges, rose gardens, huge red and gray stones. Large elevation changes, many beautiful plants and cozy corners create a unique atmosphere of the Kislovodsk resort. In this lower Park, at a small distance, the visitors can see strange “Red Mushrooms” that are huge stones of unusual shape due to rain and wind. 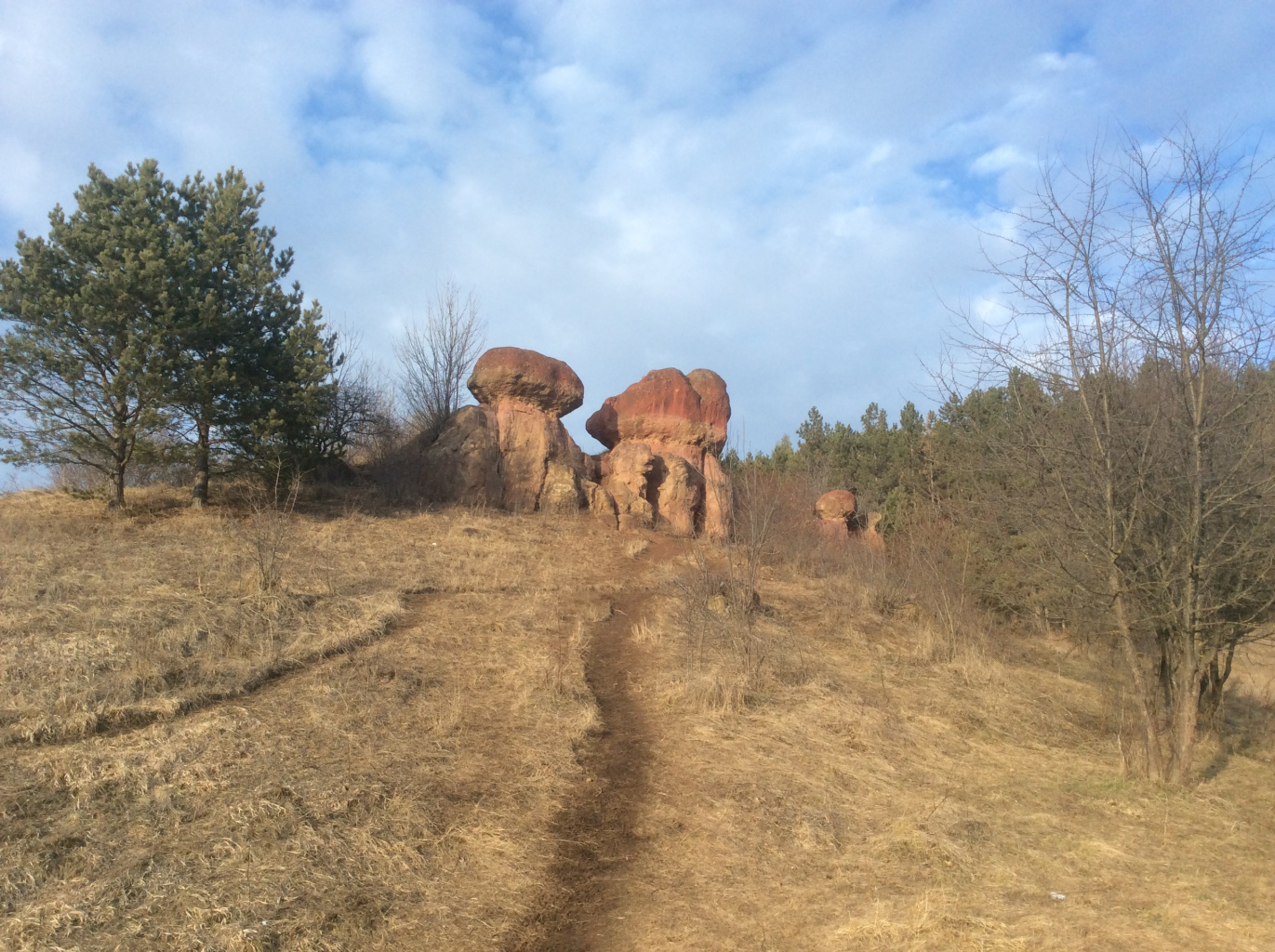 Among the attractions of the upper Park is the Kosygin trail with bizarre rocks and caves, streams, and waterfalls. It is better to look at the map or smartphone more often not to overlook anything or get lost. In addition, it is easier to understand that some of the trails are intended for extreme walks. So, if you are afraid of dizziness, I advise you not to turn onto narrow mountain paths, but to stick to wide promenades - there are also many of them in the mountainous part. 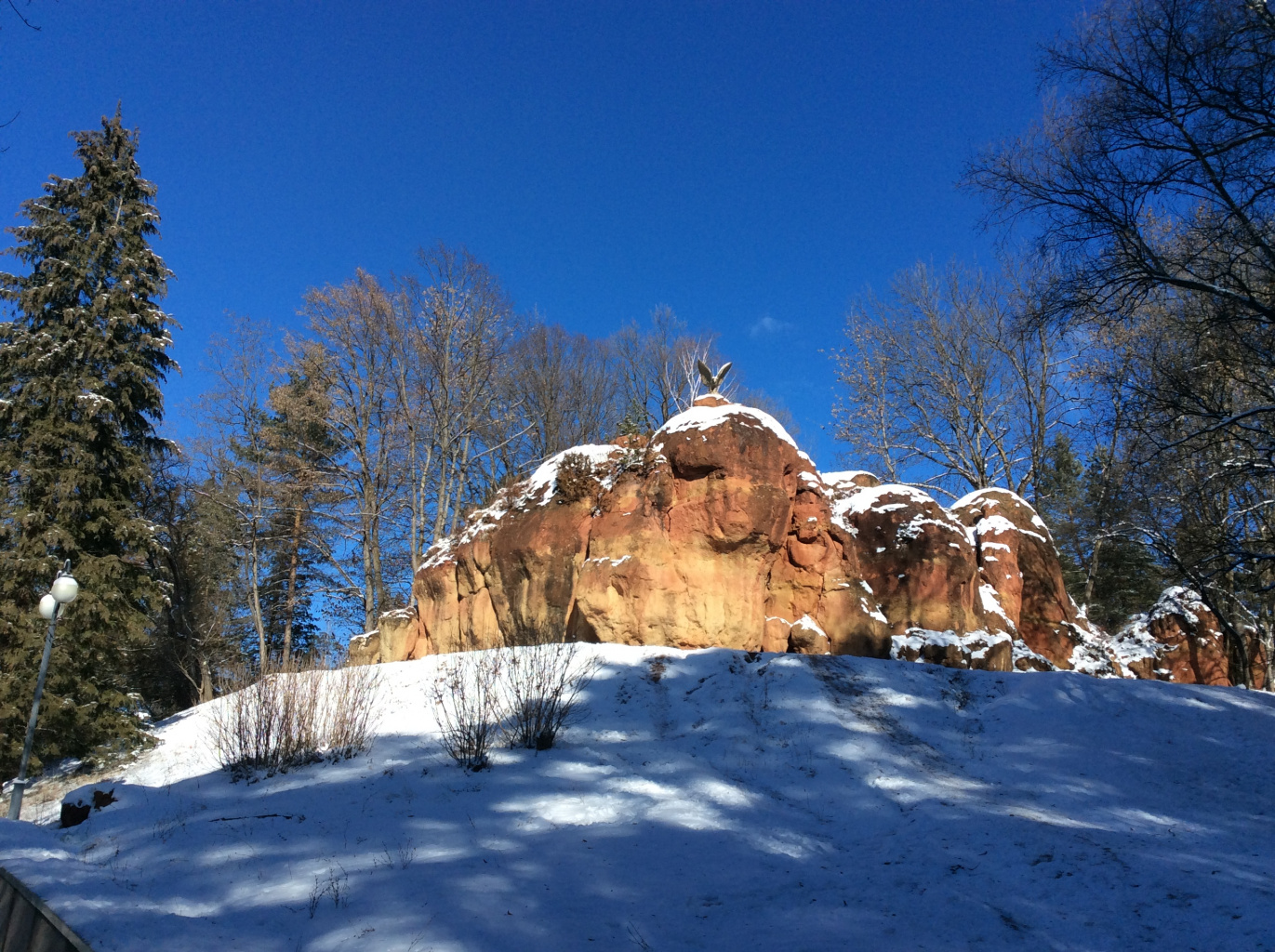 It is difficult to see the entire Park and the amazing attractions of Kislovodsk, take a walk in the surrounding mountains, visit the nearest cities of Pyatigorsk and Zheleznovodsk, swim in the Suvorov thermal springs, and even more so, to go to Dombay and Elbrus during one journey. Therefore, having enjoyed the winter benefits of the resort city, I think it would be right and nice to return to these beautiful places in the warm season.