Lyubov Ivanova
Correspondent in the Balkans
07-11-2022

Until recently, no one has seen homlins. There were only rumours about these mysterious creatures - the homlins - living in the amber rich region. These brownies, or goblins, or tutelars that are the guardians of homes and lovers of bernstein (fossil resin) have been hidden from the eyes of men for a long time. And just in 2018, Grandfather Carl, the founder of the homlins’ dynasty, decided to appear before people. And he appeared in the heart of the ancient city. The cheeky old man sits in front of everyone right on the Honey Bridge opposite the Kant Island and the Cathedral. 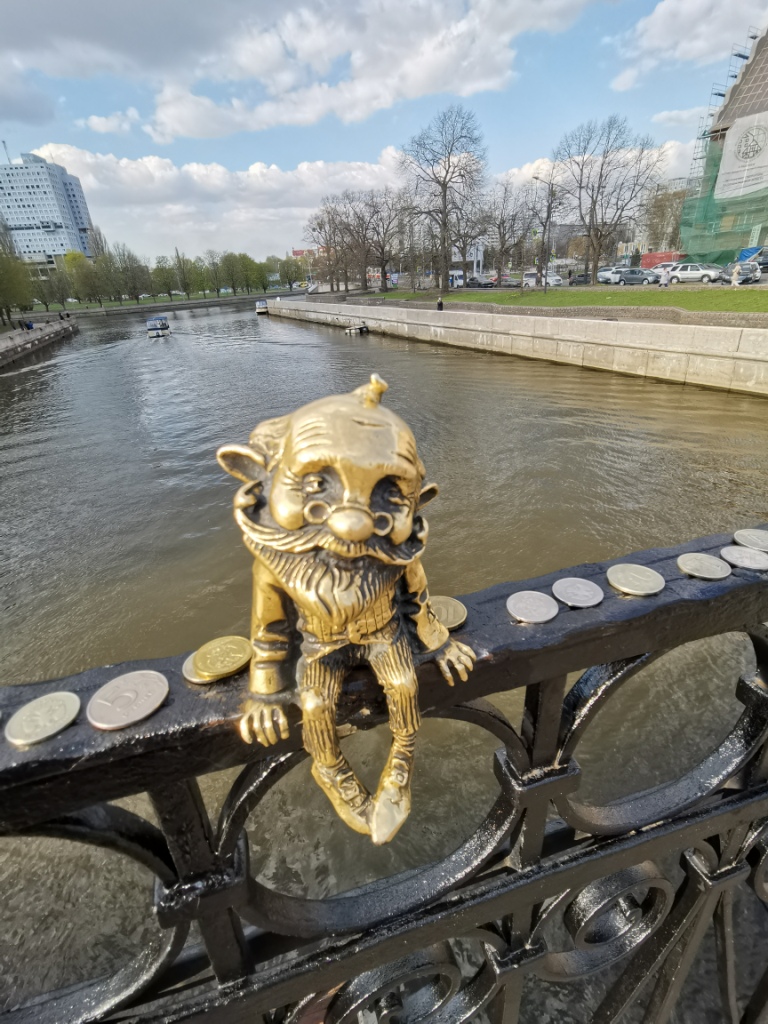 The Cathedral of Koenigsberg on the Kant Island, a religious building of the 14th century, is an architectural landmark of Kaliningrad. It was the main temple of Prussia and is a cultural heritage site today, a rare example of Gothic style in modern Russia. It houses the Museum of Immanuel Kant who lived nearby and was buried in the tomb in the Cathedral. The building is also used as an exhibition and cultural centre. It has 2 pipe organs and the most up-to-date acoustic system. In the square in front of the Cathedral, various fairs and gala concerts are held. The Honey Bridge connecting the Kant Island with the rest of the city is always crowded. Perhaps, that is why the curious homlin Carl chose the Honey Bridge for his appearance before the people. 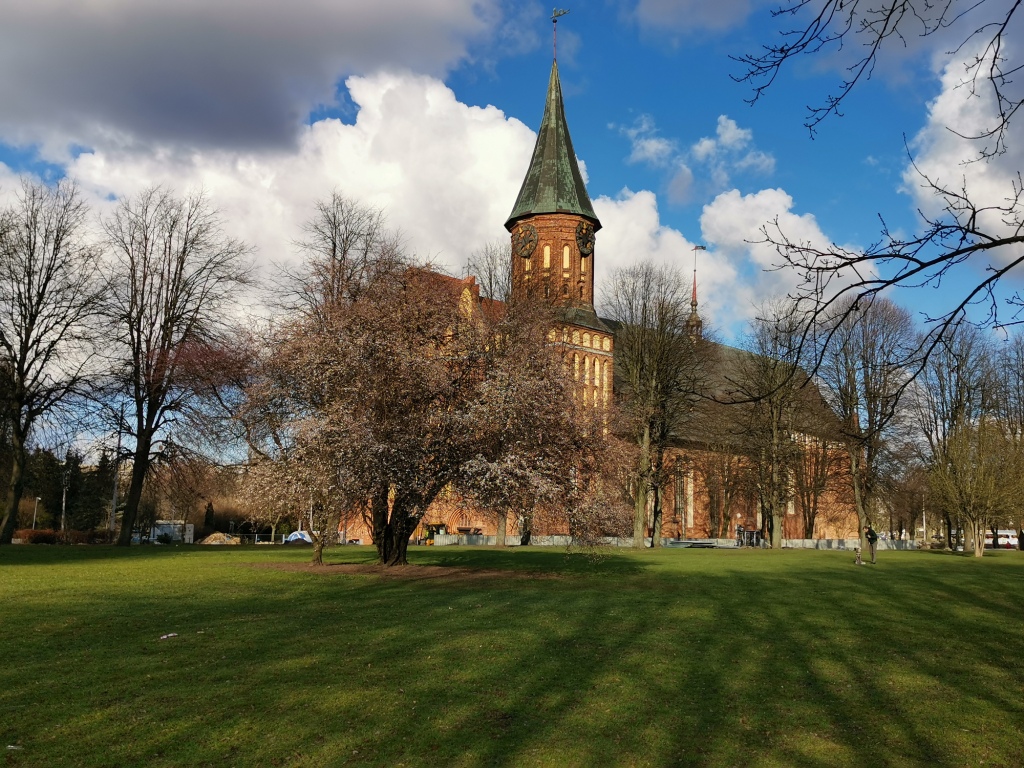 Today, the funny old man is not only a new landmark of Kaliningrad, but also part of an adventure tour - a quest to find his relatives. The rest members of his family also followed in Carl’s footsteps. The rumours about this leaked out and today, one can observe the queues not only at the museums in the most popular places of Kaliningrad, but also at the miniature homlin figures located in quite unexpected places around the city.

So, the wife of the restless Carl, old Marta, put her knapsack right in the embrasure of the fortification guarding the approaches to the ancient Dohna’s Tower (German: Der Dohna Turm) from enemies. The Amber Museum, the most famous museum of Kaliningrad, is located in this fortification bastion tower. In its 28 halls, the visitors can admire unique Baltic amber pieces, get to know about the origin of the ‘solar stone’, see prehistoric insects and amphibians ‘sealed’ in fossilized tree resin millions of years ago, and admire the goods made from this amazing mineraloid. And nearby, good-natured old Marta is waiting for you; everyone strives to pat on her nice cap and, of course, add a new photo to the pictures of the homlins’ family. 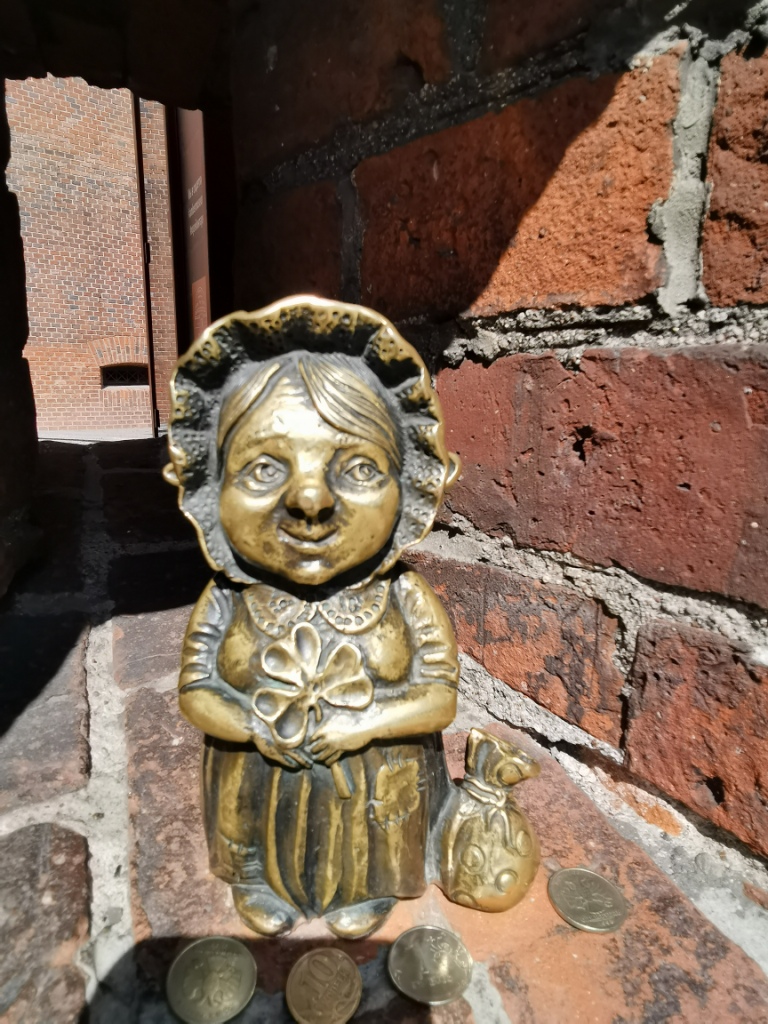 Light-minded Varvara is near her mommy, the snub-nosed young beauty is blowing kisses from the Wrangel’s Tower (German: Der Wrangel Turm), the twin of the Dohna Tower. 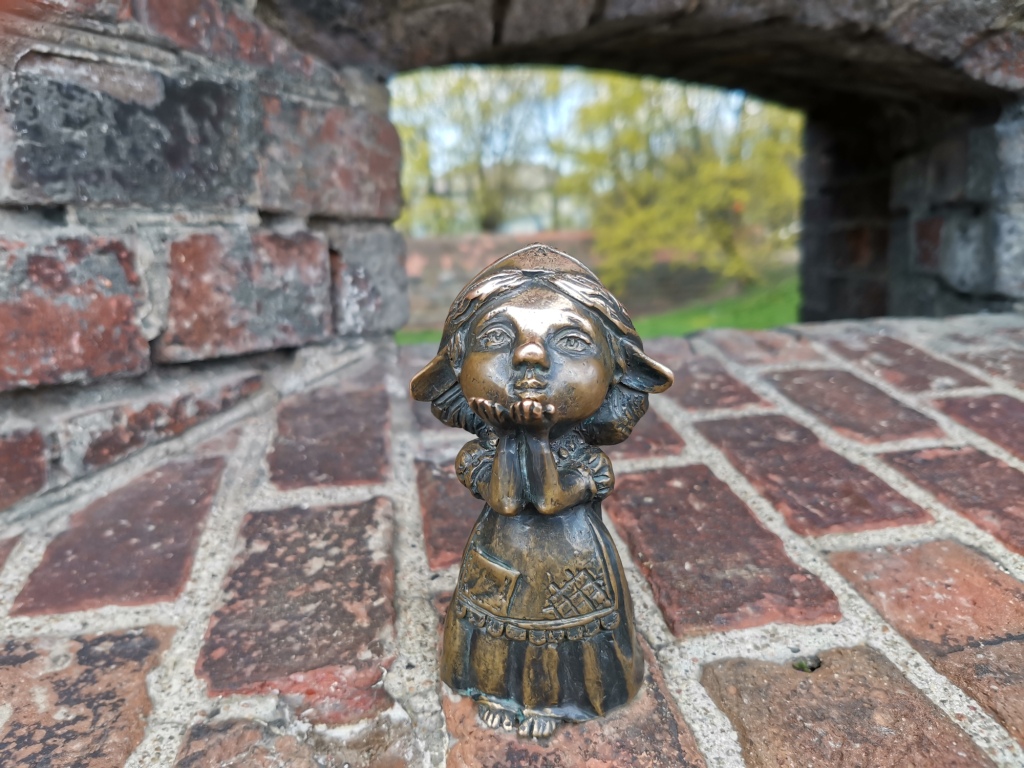 Both historical towers make a well-preserved part of the fortification defense system of Koenigsberg.

For centuries, the capital of Prussia had strengthened its security and built two lines of the strategic fortress consisting of strong thick walls, towers, and forts. Now, there are museums in some of them like the Amber Museum in the Dohna Tower. The Museum of East Prussia created by enthusiastic archaeologists is in the Pregel Bastion, and the exposition featuring a very good atmosphere is displayed at the Friedland Gate (German: Friedländer Tor) that is also part of the city’s defensive fortifications. At the Royal Gate (German: Königstor), the visitors can get acquainted with the history of diplomatic relations between Russia and Prussia; most of the exposition displayed at the Friedrichsburg Gate (German: Friedrichsburger Tor) is devoted to the Great Embassy of Peter the Great and his training in the Russian bombardier skills; but Fort No. 5 (in total, there are over a dozen forts) is named after the King of Prussia Frederick William III (German: Friedrich Wilhelm III), and it is one of the most visited forts in the city. In addition to seeing the amazing exposition, the visitors can also be lucky to watch the reconstruction of some historical event in this fort. 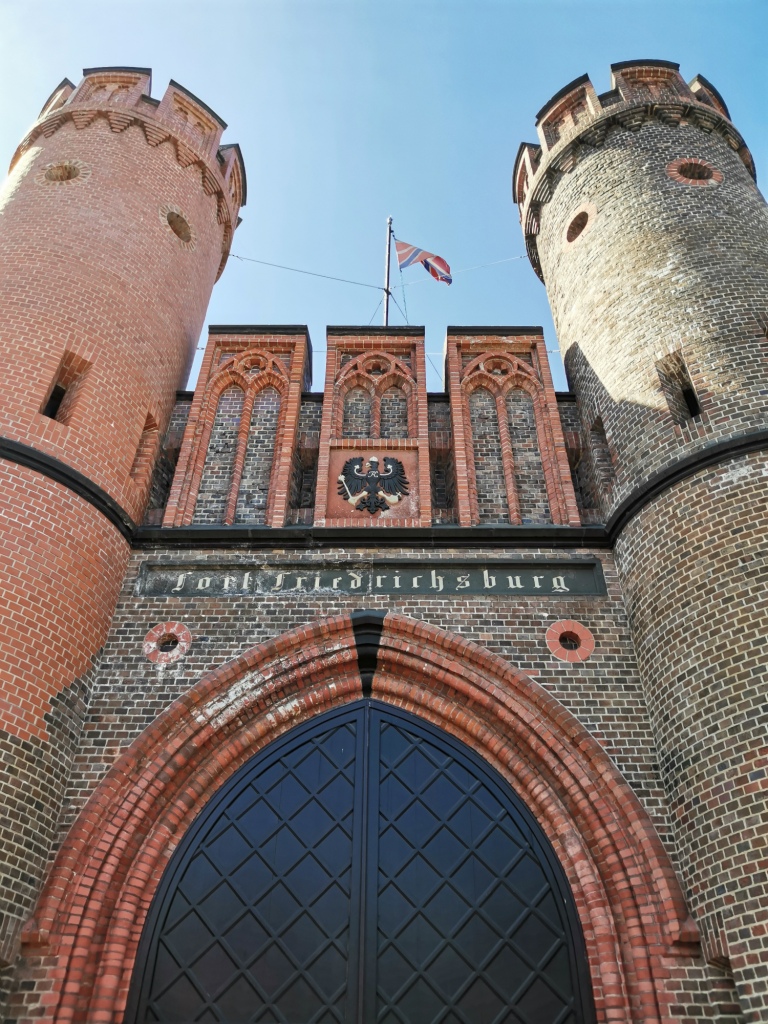 To understand the variety of the Kaliningrad’s places of interest, travellers need more than one day. But if they follow the tips of the wise homlins, they can easily walk through the main attractions of the capital of the Kaliningrad Region. Varvara’s husband Leo sits next to the building of the former Koenigsberg Stock Exchange (German: Konigsberger Borse) looking like a tired tourist. 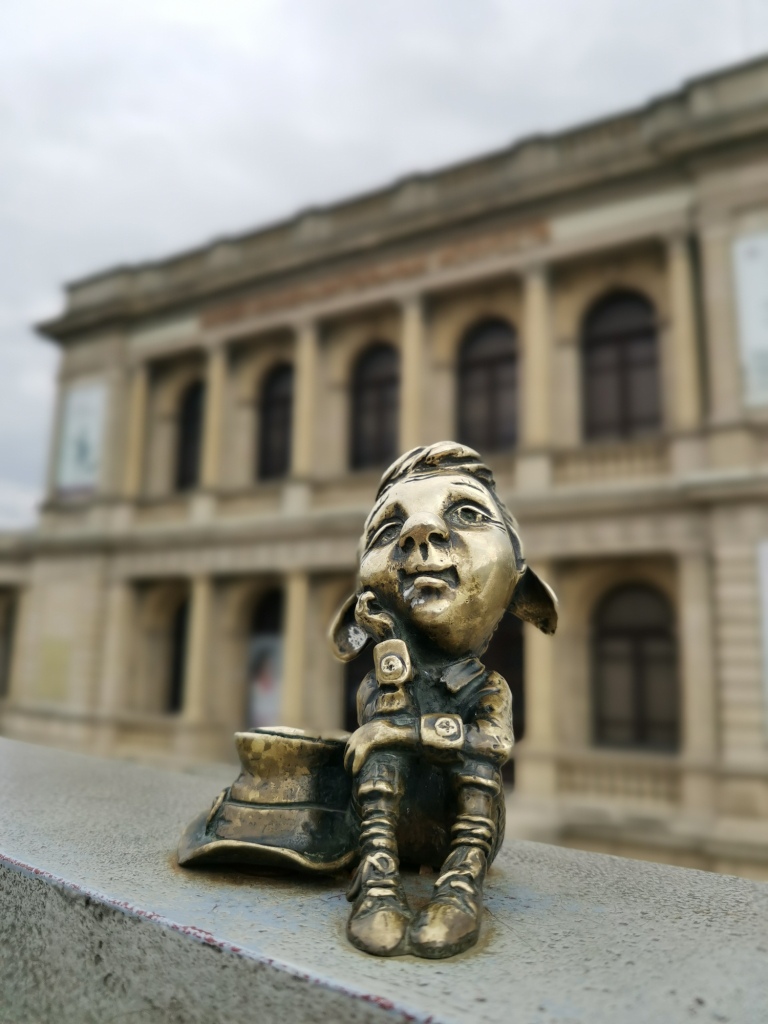 He invites the travellers to the Kaliningrad Museum of Fine Arts. However, the history of the building itself is no less interesting than the exposition displayed in it. To fully enjoy visiting this place, I strongly advise the tourists to join a guide who takes them through all the floors and old dungeons of the Stock Exchange, tell them its history and about the most valuable exhibits of the Museum.

The homlin family has three wonderful children of Leo and Varvara. Each of the kids chose a symbolic place in the city. So, Little Sailor Boy named Vityok lies right on the embankment near the Museum of the World Ocean dreaming of long voyages. 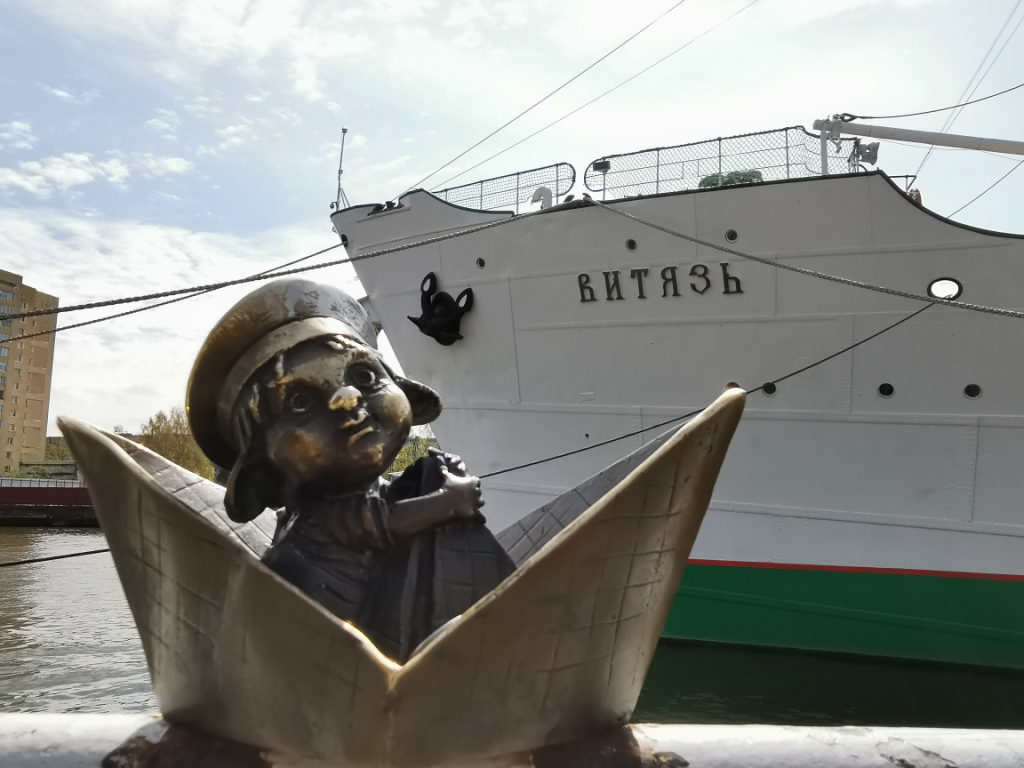 In addition to a very rich exposition, the Museum has a large walking area with very beautiful views. This is a must-visit place. Not only Vityok thinks so, but also the majority of the Kaliningrad residents.

Naughty Ulya is Vityok’s sister and she likes wild animals and she chose a place next to the Zoo. 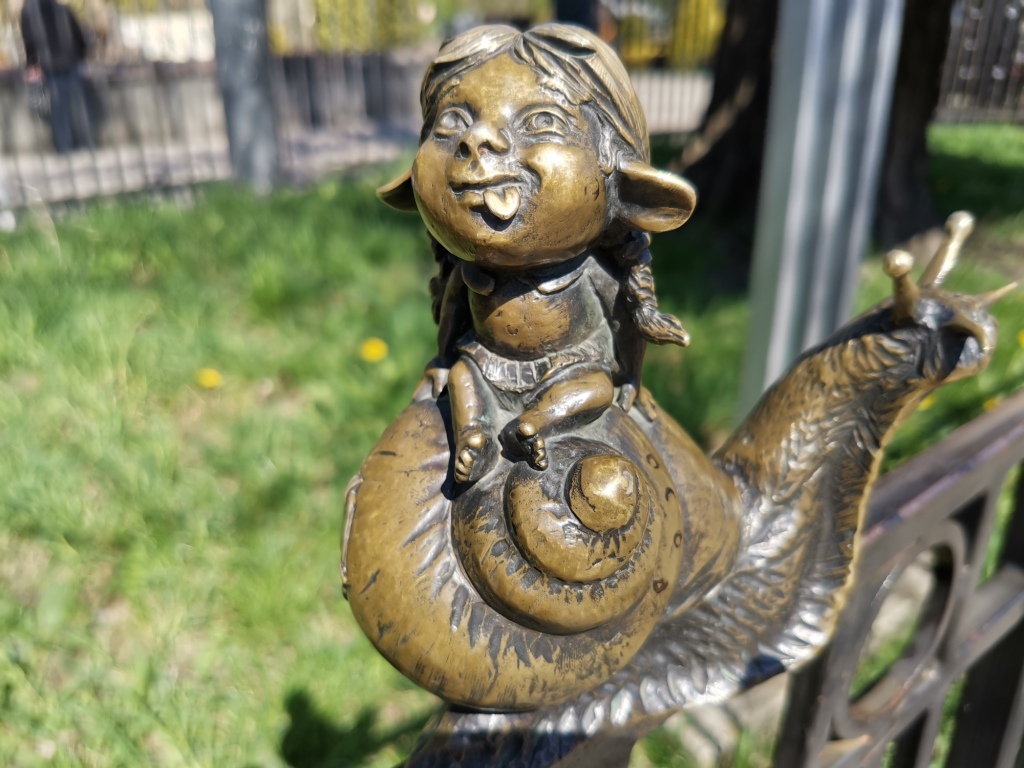 The Kaliningrad Zoo is the successor of the Koenigsberg Tiergarten created here at the end of the 19th century. On a large area of the Zoo, there is a famous Arboretum in addition to very interesting animals. There is also a playground for contact communication with young animals. The Park also hosts themed tours such as “From Raccoon to Hippo”, “The Ark of Noah”, as well as some family tours interesting to small children. During one of the tours, the travellers have a lucky chance to notice naughty Ulya riding a snail.

Well, the last member of the homlin family in Kaliningrad today is a ‘tired’ chubby little boy Antoshka. 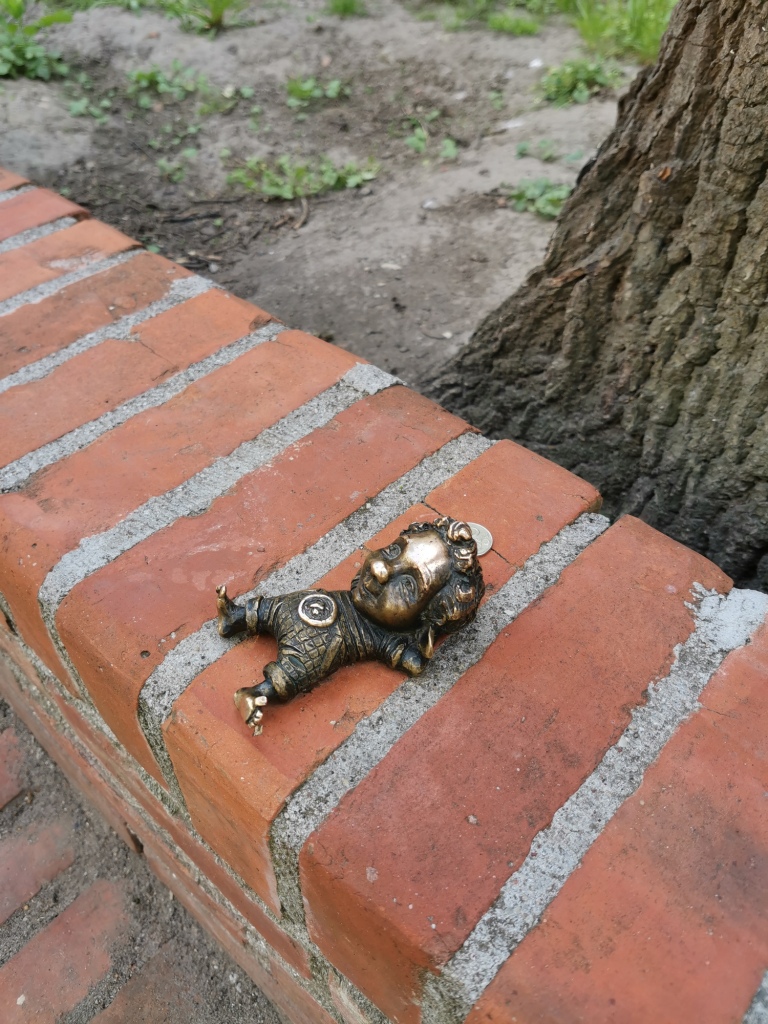 A funny boy is under a tree in the old German quarter of Amalienau famous for its well-preserved mansions of the 19th century. In one of them, there is the Altes House (German: Altes Haus), a house-museum of a Prussian life style. In an authentic setting of the late 19th-early 20th century, the travellers can listen to exciting stories told by a guide and can touch any exhibit and even sit in an old arm-chair. Only guided tours are allowed at the Altes House that are held every hour. In the neighbouring building, there is a cafe in a retro style where the visitors can travel back a hundred years - as if they are at the Museum.

The residents of Kaliningrad believe that those who have not been to Amalienau cannot fully appreciate the atmosphere of the city. Andrey Yermak, Minister for Culture and Tourism of the Kaliningrad Region, is sure that the homlins’ family is becoming a symbol of the Region’s capital. Kaliningrad businesswoman Natalya Shevchenko who came up with an idea of ​​placing mythological characters in the city’s tourism anchors guarantees: “After seeing 7 homlins, a traveller can boast of visiting 7 main attractions of Kaliningrad”.

However, the city is so full of historical and cultural monuments that some more homlins are required in Carl’s family. Perhaps, sculptor Andrey Sledkov who created the famous bronze figures has already started thinking about this. It took him 3 years to make the group of seven homlins. Well, for the sake of increasing the number of miniature landmarks in the tourism area of Kaliningrad/Koenigsberg, travellers can wait a few more years. After all, the city has been waiting for almost 8 centuries for the first members of the homlins’ family to appear in its streets.