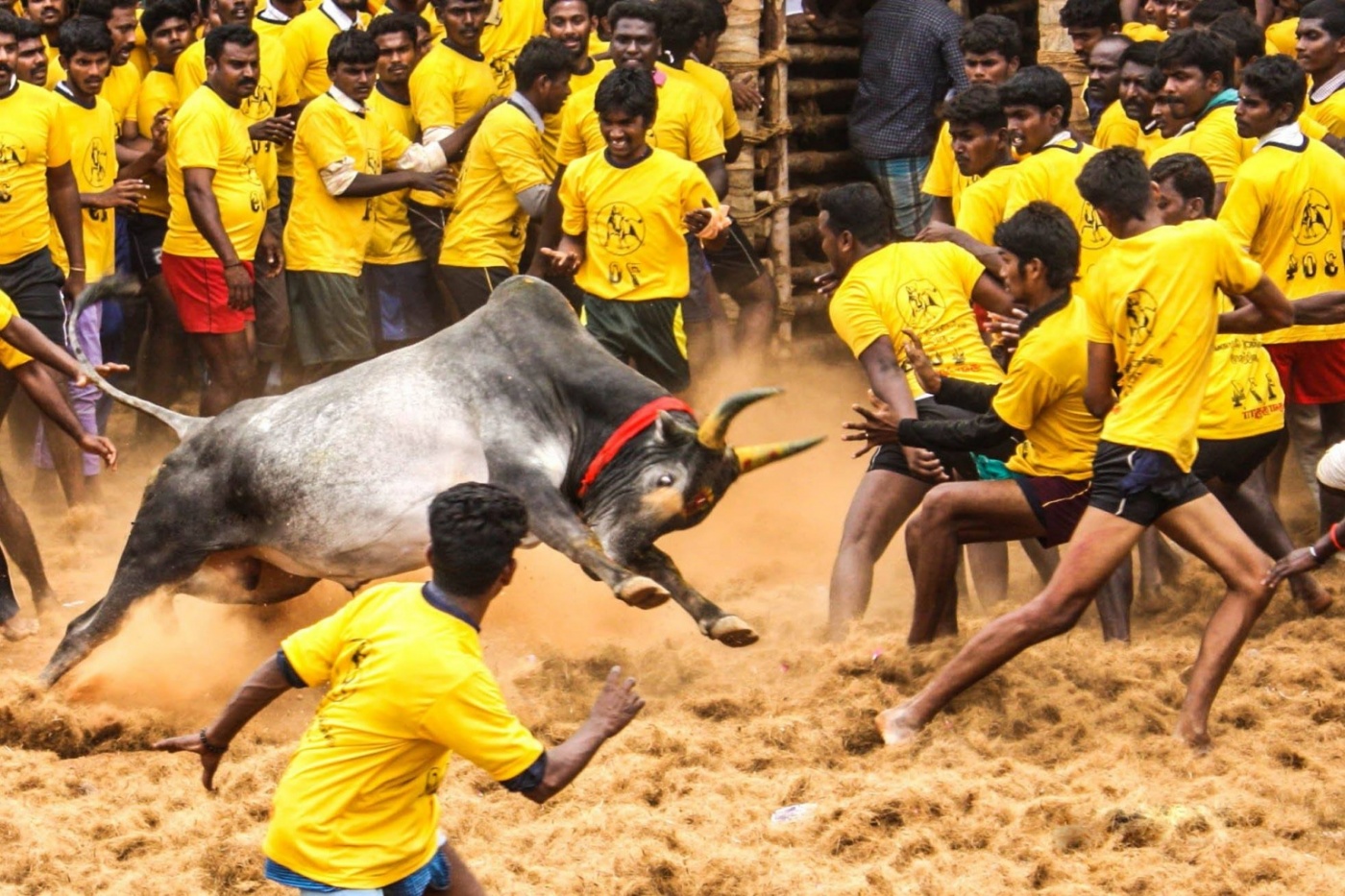 The people of Tamil Nadu were still able to defend their original right to jallikattu - a dangerous game with angry bulls that annually takes a toll on several human lives and dozens of people become disabled. Indian Prime Minister Narendra Modi spoke out in favor of continuing the ancient tradition and told his political opponents: “What you call a ‘barbaric practice’ has been part of the Tamil culture for centuries,” thus putting an end to the longstanding disputes between the animal rights activists and worshipers of the ancestors’ customs. 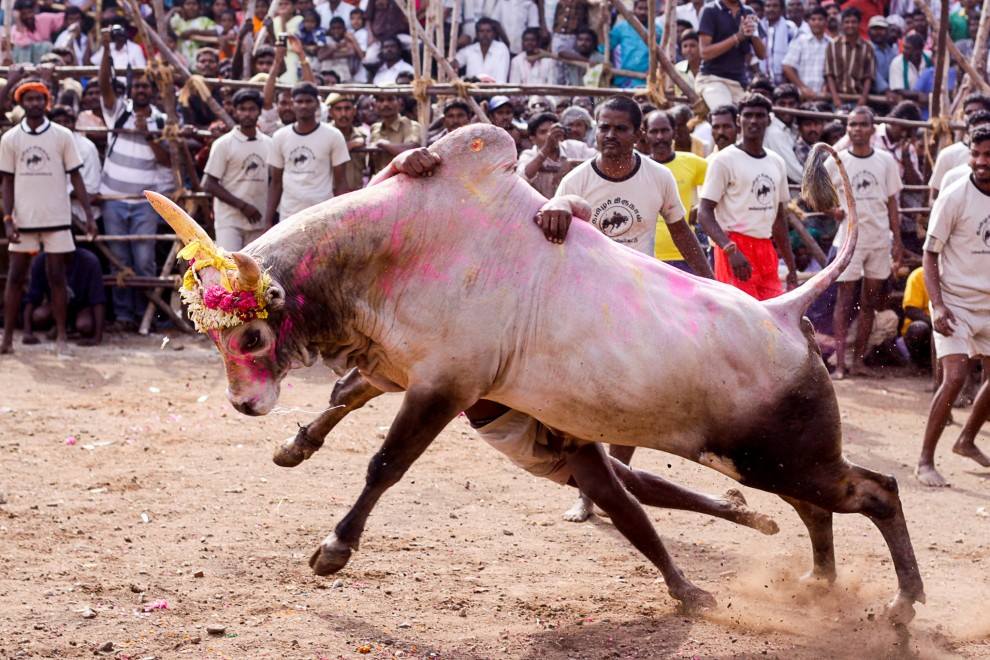 The world’s oldest South Indian bullfight typically practised as a part of the Pongal Harvest Festival that is celebrated annually in January is over two millennia. The wall paintings and cave drawings depicting a man attempting to bring a bull to a stop were found near Madurai, the oldest city on the Indian Peninsula. This painting is 2 500 years old.

In recent years, the attempts to ban the unique tradition have been made. These attempts almost succeeded in May 2014, when jallikattu was banned by a Supreme Court decision under the pressure from animal rights organizations and activists. However, the Tamil people protested so strong that the Indian authorities canceled this unpopular decision on January 8, 2016, and the ‘bloodless bullfight’ resumed on the same scale - with the participation of over 1,400 bulls and tens of thousands of participants and spectators. Then again, the bans and protests continued - as well as the legal battle - for several more years, and only in 2019, the bull festivals attracting crowds of local admirers and hundreds of tourists from all over the world resumed. 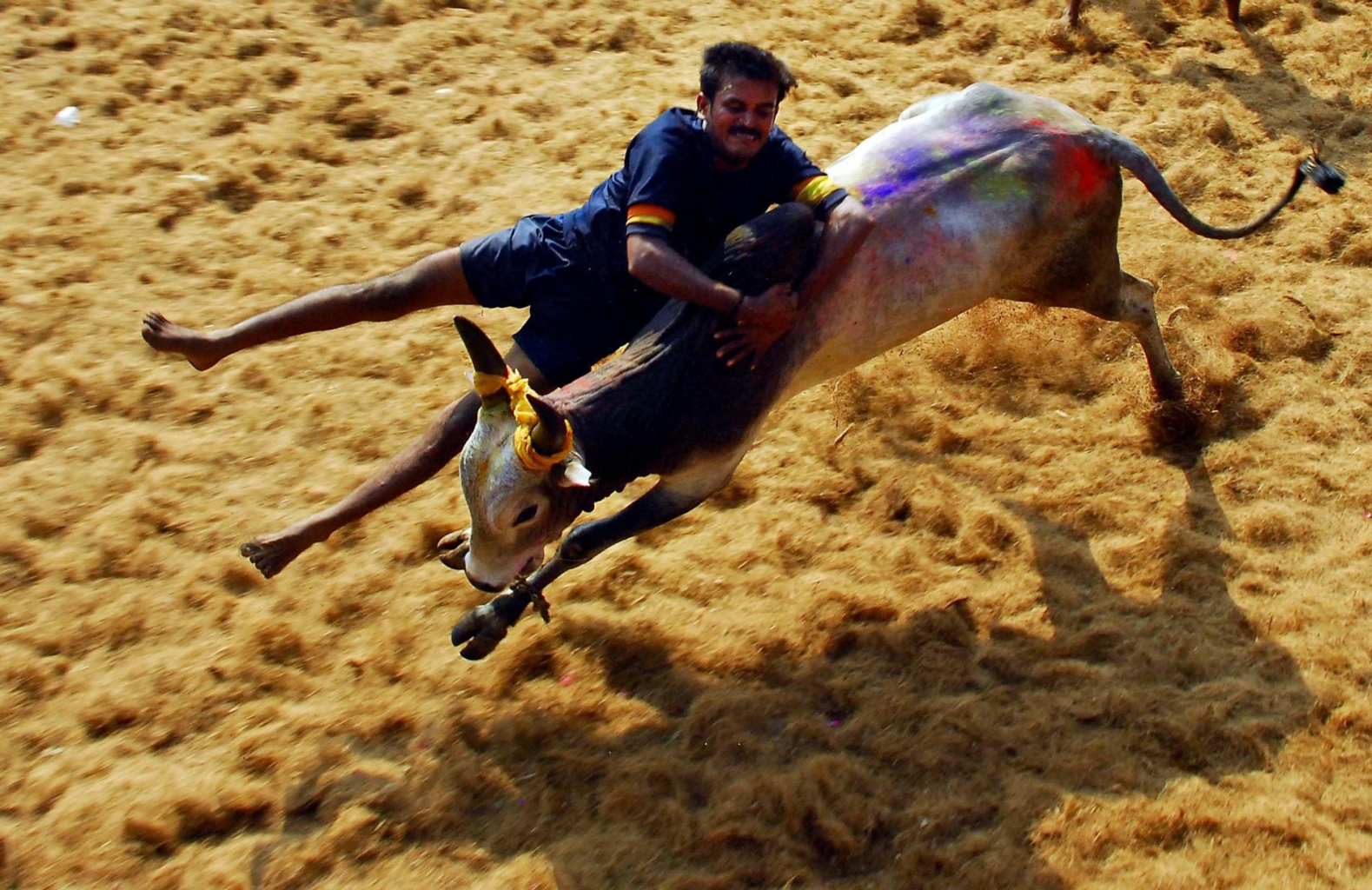 The traditional entertainment includes the attempts to remove the prizes tied to the grandiose, dangerously curved horns. The value of the prizes is not high - they can be an inexpensive necklace, a good luck charm from the nearest temple, a bundle with a handful of rupees. In this sport, it’s not about winning, it’s about taking part. After all, it is in jallikattu that young men can demonstrate their dauntless courage, agility and bravery to the girls. Therefore, hundreds of young men take part in the competition for the title of the best. The winner is the one who can grab the large hump on the bull’s back and hang on to it while the bull makes three laps around the arena, or until the bull crosses the finish line. There are several rules for participants: they must not grab the bull’s horns or tail; it is also forbidden to stop the animal by placing the player’s feet between the bull’s front limbs.

It is noteworthy that in the prohibitive wording of the Supreme Court, the definition of jallikattu is as “a sport with the use of bulls, in which the animals seriously suffer”, which is a crime according to the relevant rule of the Indian criminal law. However, in this fun games with huge bulls of the fighting humpback breed zebu (Bos indicus), people suffer and often die rather than horned ‘athletes’ that are carefully tended, well-fed, cleaned to shine and decorated with flowers, and painted. Murdering was never meant in jallikattu: the animals were always taken care of, but the lost ‘human resources’ were not taken into account.

Every year, the bulls, outraged by the ‘impudence of the competitors’ - in contrast to the Spanish and Mexican bullfighting - and not restrained by any obstacles that protect them from the crowd of spectators, injured dozens of fans, trample many enthusiastic players to death. So, this year, during three days of the traditional jallikattu, from January 15 to 17, at least five bravehearts died from their horns and under the bulls’ hooves. Over the past 20 years, over 230 people have fallen victims to this popular sports. 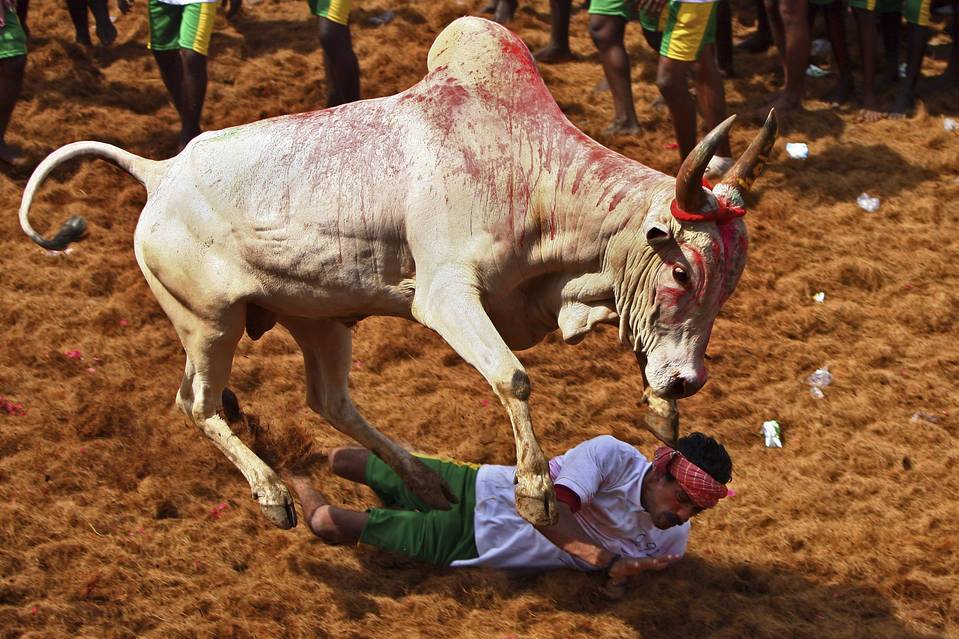 However, the incidents that led to the death of the bulls can be counted on the fingers of one hand. All of the cases happened by pure chance or because of the highly aggressive animals. The Indian society took these tragedies harder than the deaths of the humans. A significant event was the recent solemn funeral with truly royal honours paid to the champion bull Mooli in Madurai. Despite the Covid-19 lockdown in the country, hundreds of villagers gathered for a special farewell for their beloved bull Mooli, and the final procession was an extravagant affair with firecrackers bursting into the sky. The priests put the bull’s body next to the temple where Mooli lived, and the admirers literally filled the bull’s bed with garlands of flowers.

By the way, one of the arguments of the zealous defenders of the dangerous tradition is that the unique zebu bulls - specially bred for such battles - will eventually die out as unnecessary. The grounds for such fears are quite real: after bringing the Holstein cows producing significantly more milk than zebu ones, and with the widespread use of mechanized land cultivation, the population of these unique even-hoofed mammals in Tamil Nadu decreased from 1.2 mn to just 15,000.