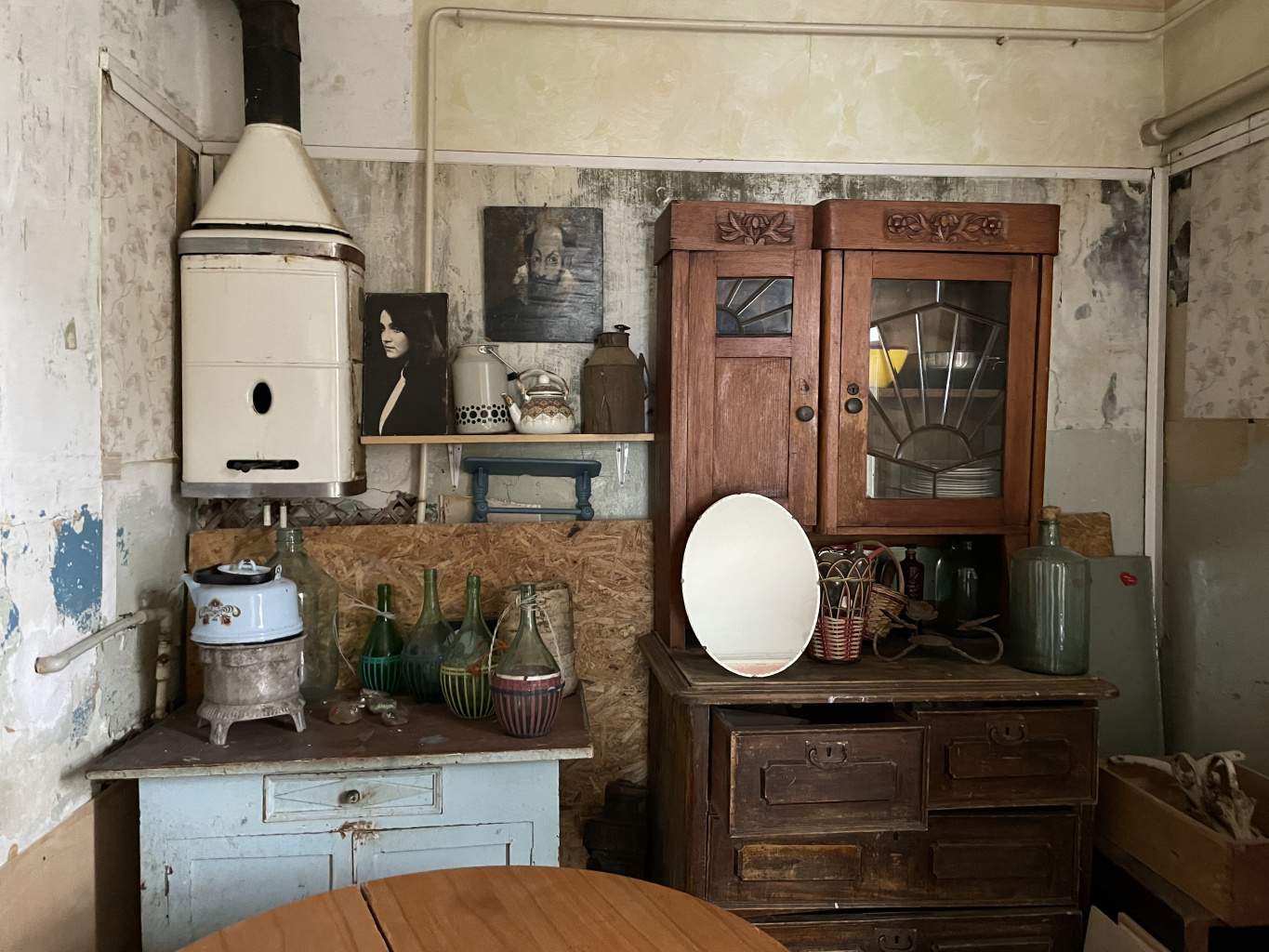 A few years ago, Nizhny Novgorod became a popular tourist destination, and there is a reason for that. It takes four hours by a Lastochka (Swallow) express train from Moscow to get to one of the oldest cities in the country that received a renovated and updated infrastructure for its 800th anniversary. The beautiful nature at the place where the Oka and the Volga rivers meet, the ancient Kremlin, gastronomic Rozhdestvenskaya street, and the Maxim Gorky’s literary museums attract the tourists to Nizhny Novgorod. An EcoTourismExpert correspondent visited Nizhny Novgorod and its Zapovednye Kvartaly (Protected Quarters). It turned out to be a story not about the city’s old houses, but about the real ‘love for the city”.

The walk through the Protected Quarters of Nizhny Novgorod begins in Korolenko Street, 18. And there’s a rationale to that. Four years ago, an unusual festival called Tom Sawyer Fest was launched with the restoration of a nice light green wooden manor house with carved shutters built in 1891 by order of Avdotya Skvortsova, the widow of the titular counsellor.

“The idea of ​​the Tom Sawyer Fest is that ‘every boy dreams of painting a fence’ and is even ready to pay for this. This is an attempt to save the wooden part of the Nizhny Novgorod’s architecture. By the time of the revolution of 1917, seventy percent of the houses in our city, like in many other cities surrounded by forests, were made of wood. And such houses are one of the attractions of Nizhny Novgorod, like the house in Bolshaya Pokrovskaya Street, or the Kremlin, where the local authorities have always been,” says Tatyana, the guide of the Zapovednye Kvartaly company.

The main goal of the Tom Sawyer Fest in Nizhny Novgorod is to preserve its wooden houses. This goal turned out to be interesting and important. Soon, not only sponsors took part in the Tom Sawyer Fest, for example, the city’s construction companies and stores of equipment and materials, but also the residents of the city joined the Fest’s activities.

“For example, one old woman, ‘babushka’, is among the participants in the Fest, she is not able to take part in renovating the houses, but every Saturday during the restoration period, she brings the pies she bakes for the volunteers - and the Tom Sawyer Fest lasts the entire summer seasons. So, everyone can take part in the festival - there are many ways for those who has a will,” the guide explains.

As a result, as part of the festival, the façade and beautiful carved architraves of Avdotya Smirnova’s house were renovated. 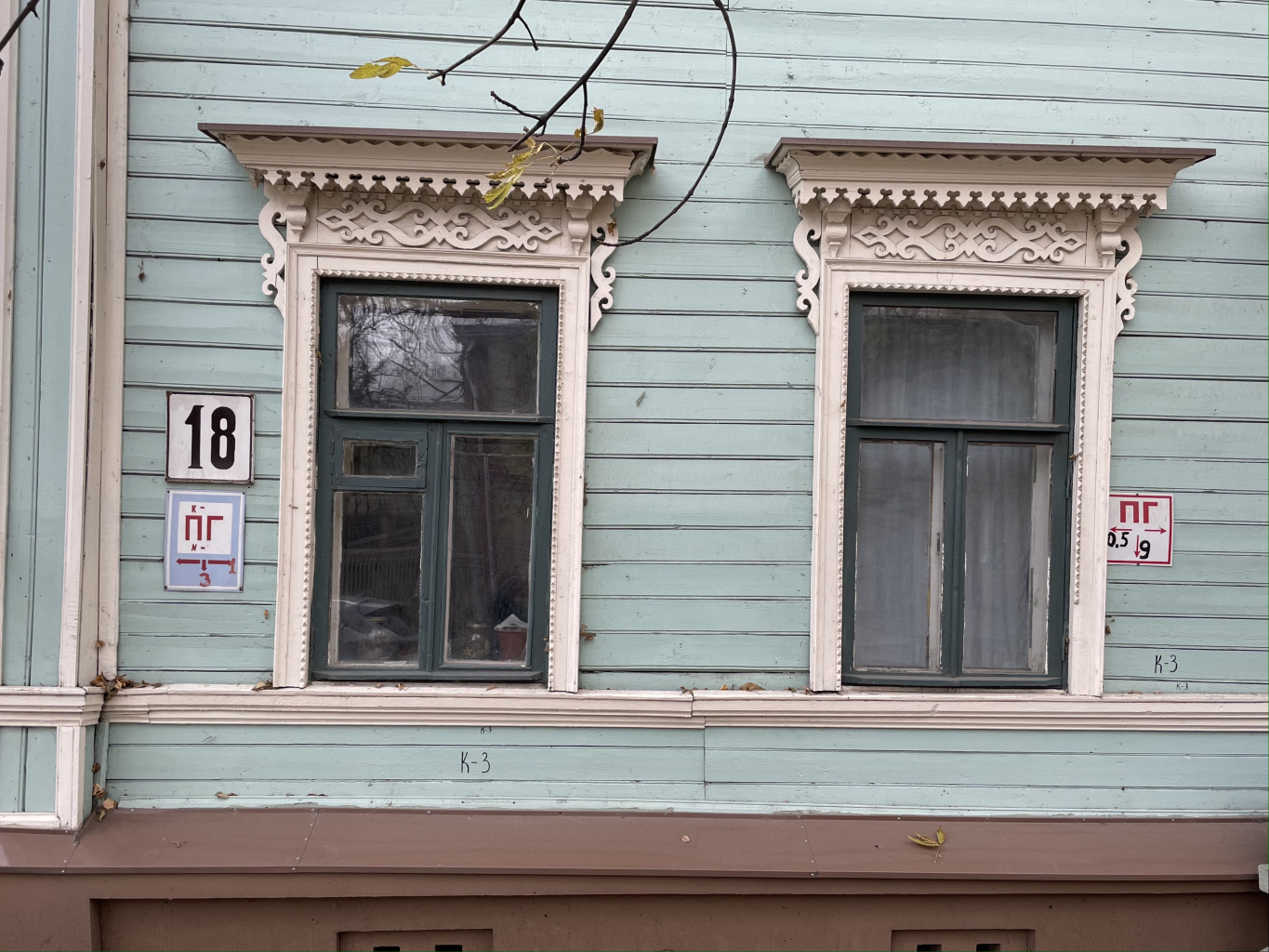 We open a wooden door and get into one of the apartments on the upper floor. Sunlight pours softly through a special ‘roof lantern’. Until recently, people lived in the house, and today, it is the headquarters of the Tom Sawyer Fest and the Protected Quarters project.

“Many people believe that wooden houses rot or destroy quickly. It’s not true. Wooden houses are in good condition if they are taken proper care of. For example, within the framework of the festival, the reconstruction of an unfit building began, the casing was removed from it and suddenly we saw that the burnt logs were inside. This means that once, there was a fire in the house. But even the peoples who lived in the house for more than a dozen years did not know about the fire,” says our guide Tatyana. 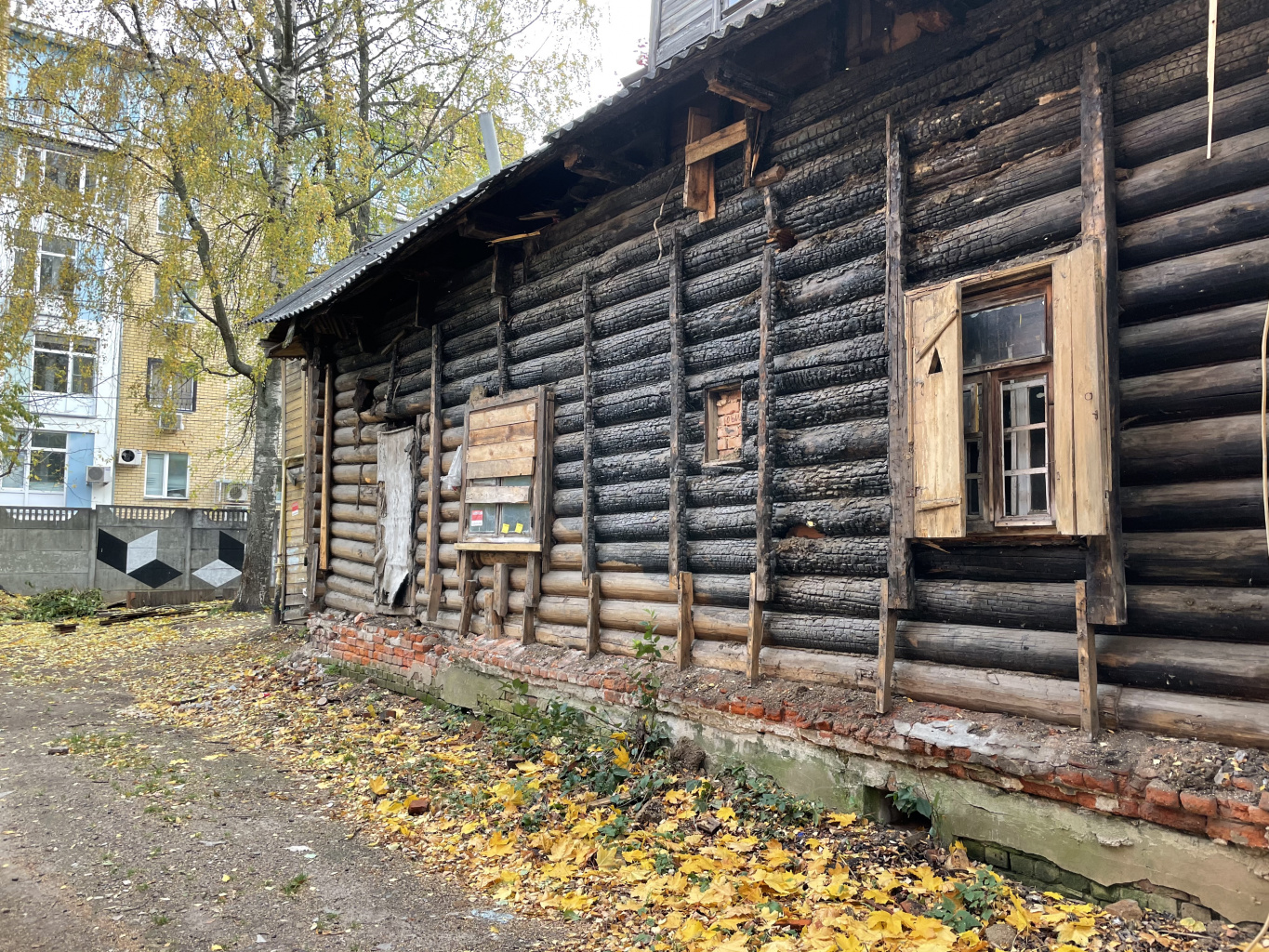 We enter the apartment of an old house. We see a kitchen with a sideboard, enamel basins and skiffle boards, as well as a living room with a round table and a lampshade. On the walls, there is a real exhibition of photos of Nizhny Novgorod in the 1970s. Most of these things were found in the house, they once belonged to the people who lived in the house and left it.

“We intentionally saved the ‘cross-section’ of the wallpapers, it is almost one centimetre thick. These are wallpapers glued by the tenants of this house. Some wallpapers are blue and some are pink. And the last layer is made of newspapers from the 1890s, which were used to line the walls to make them smooth. By the way, we found a letter from the First World War front under the wallpapers, apparently, someone tried to hide it,” Tatyana shows a piece of the letter. (photos 3, 4, 5, 6, 7). 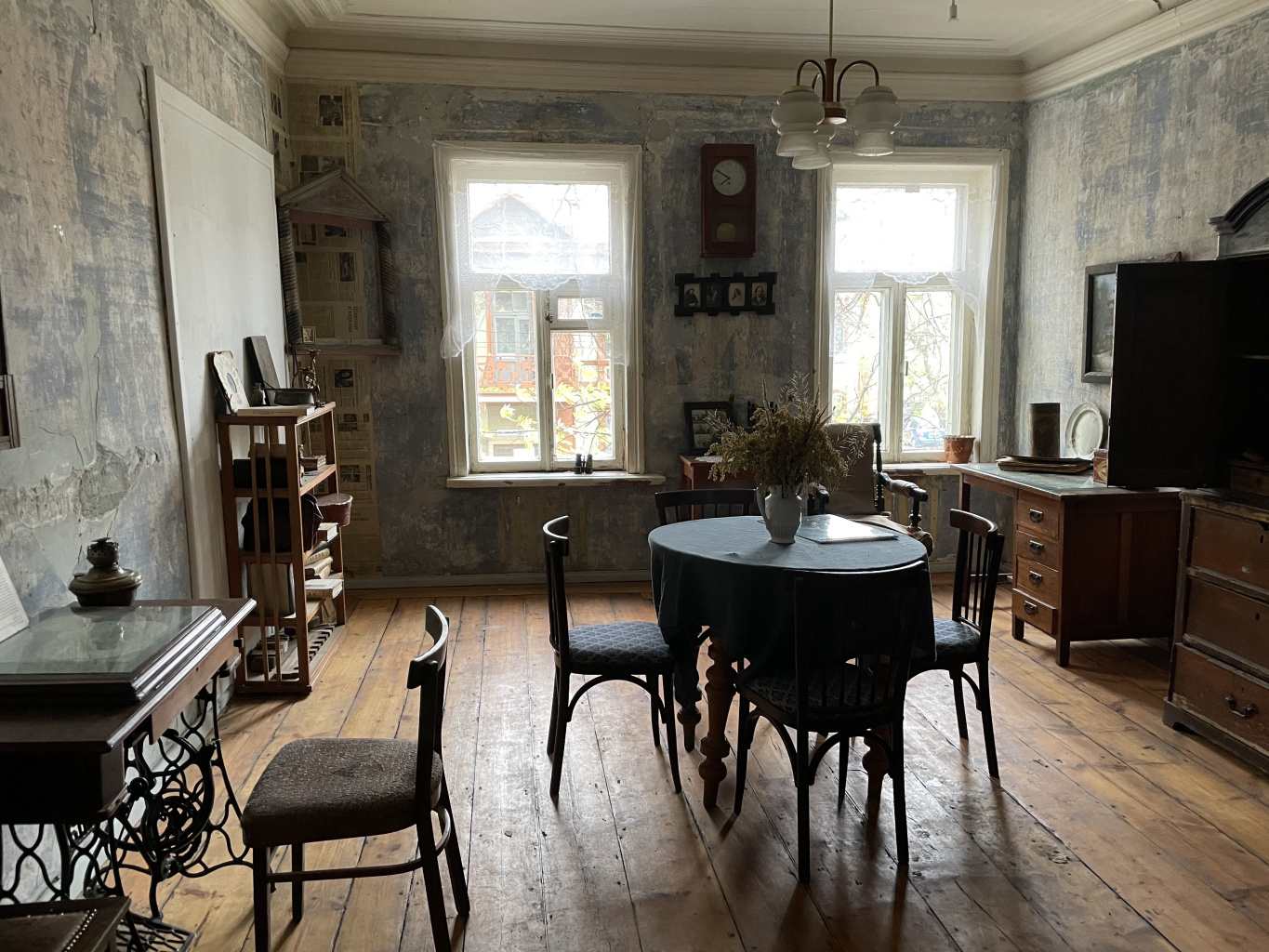 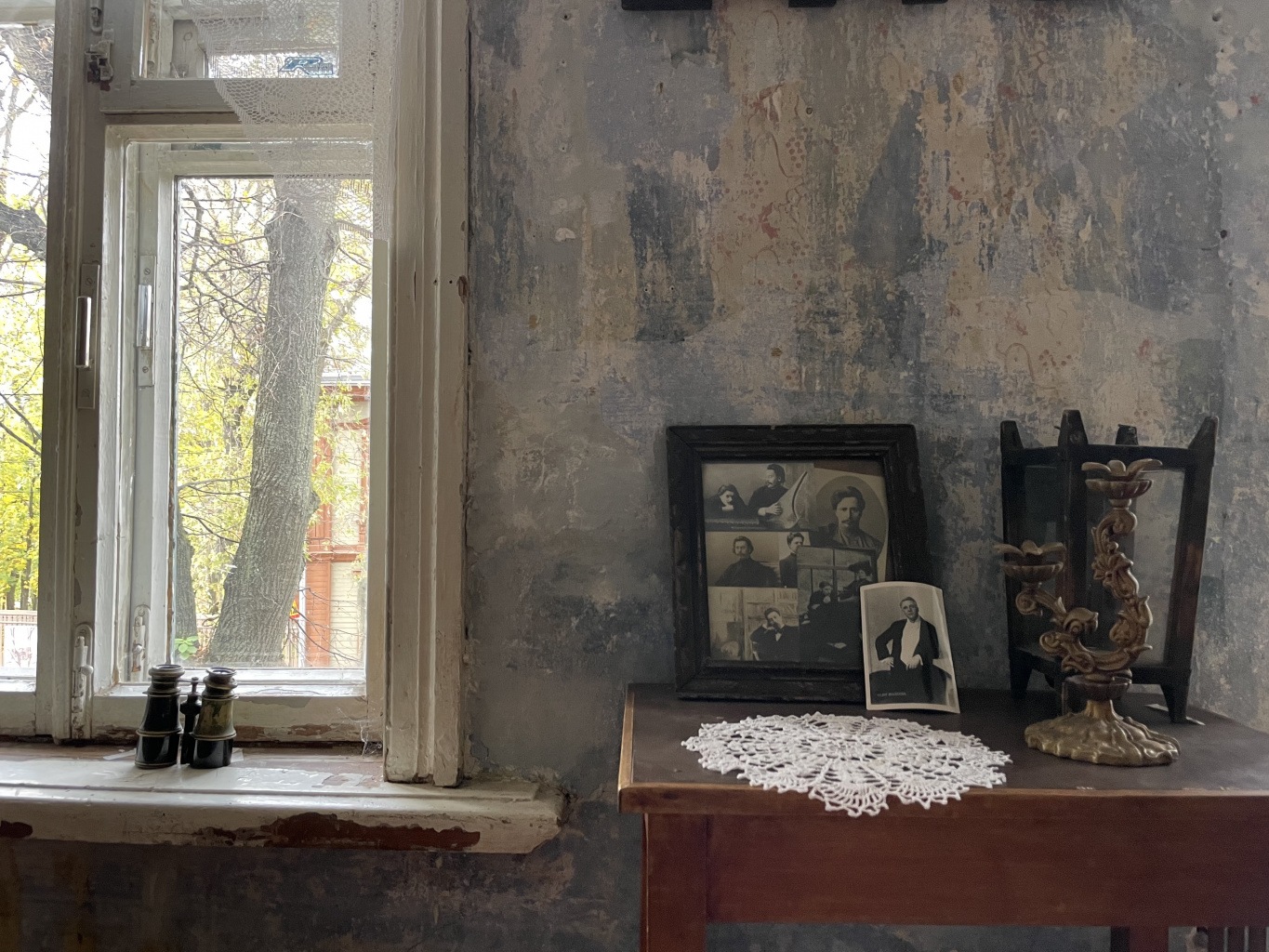 The Protected Quarters of Nizhny Novgorod include 28 wooden houses near ​​the Church of the Three Saints. 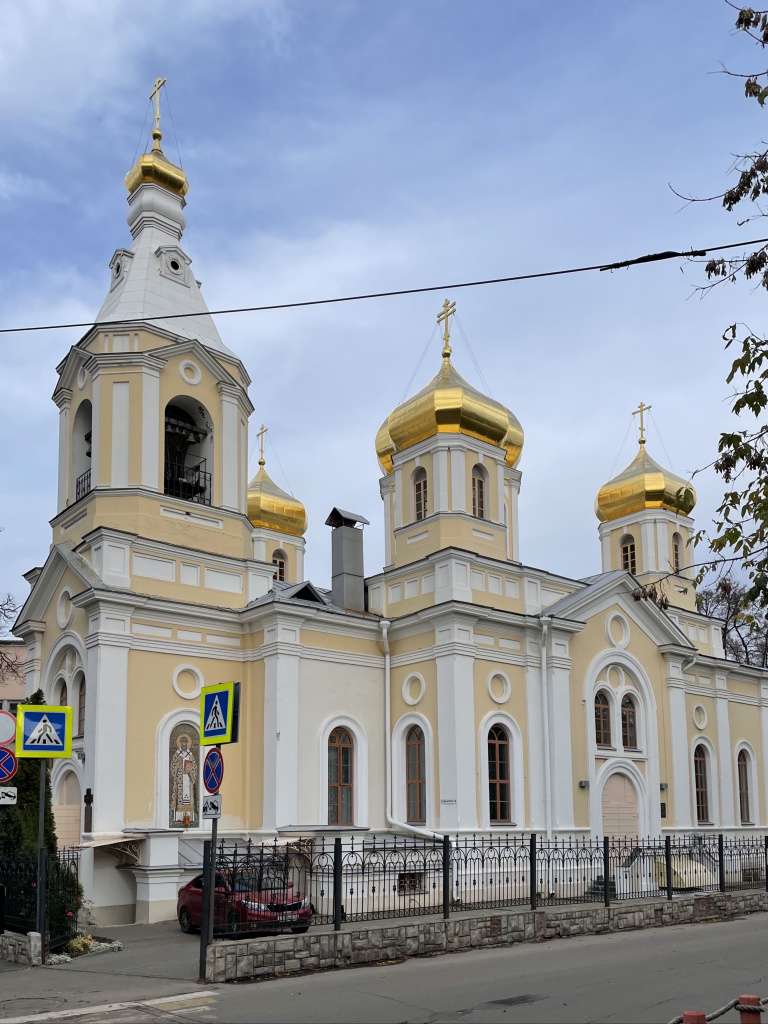 Built in 1860, it is an excellent example of the architecture of the Moscow-style churches of the 16th century, which have not been preserved in the capital of the country. The Church is active now. By the way, people still live in many houses of the Protected Quarters. Now, it is considered the centre of Nizhny Novgorod, but once, it was a suburb.

“In many ways, this part of the old houses is so well preserved thanks to Maxim Gorky (his real name was Aleksey Peshkov). The writer lived for several years in one of the quarters. For example, he moved to the house in Korolenko Str., 11 in 1900, when he was adult. Famous singer Chaliapin often visited him, the balcony from which he sang is still preserved, and the youth used to gather here and listen to his singing. And in the house in Korolenko Str., 42, Maxim Gorky spent his childhood, the house belonged to his grandfather Vasily Kashirin. Maxim Gorky mentioned him in his story ‘Childhood’,” explains our guide Tatyana. 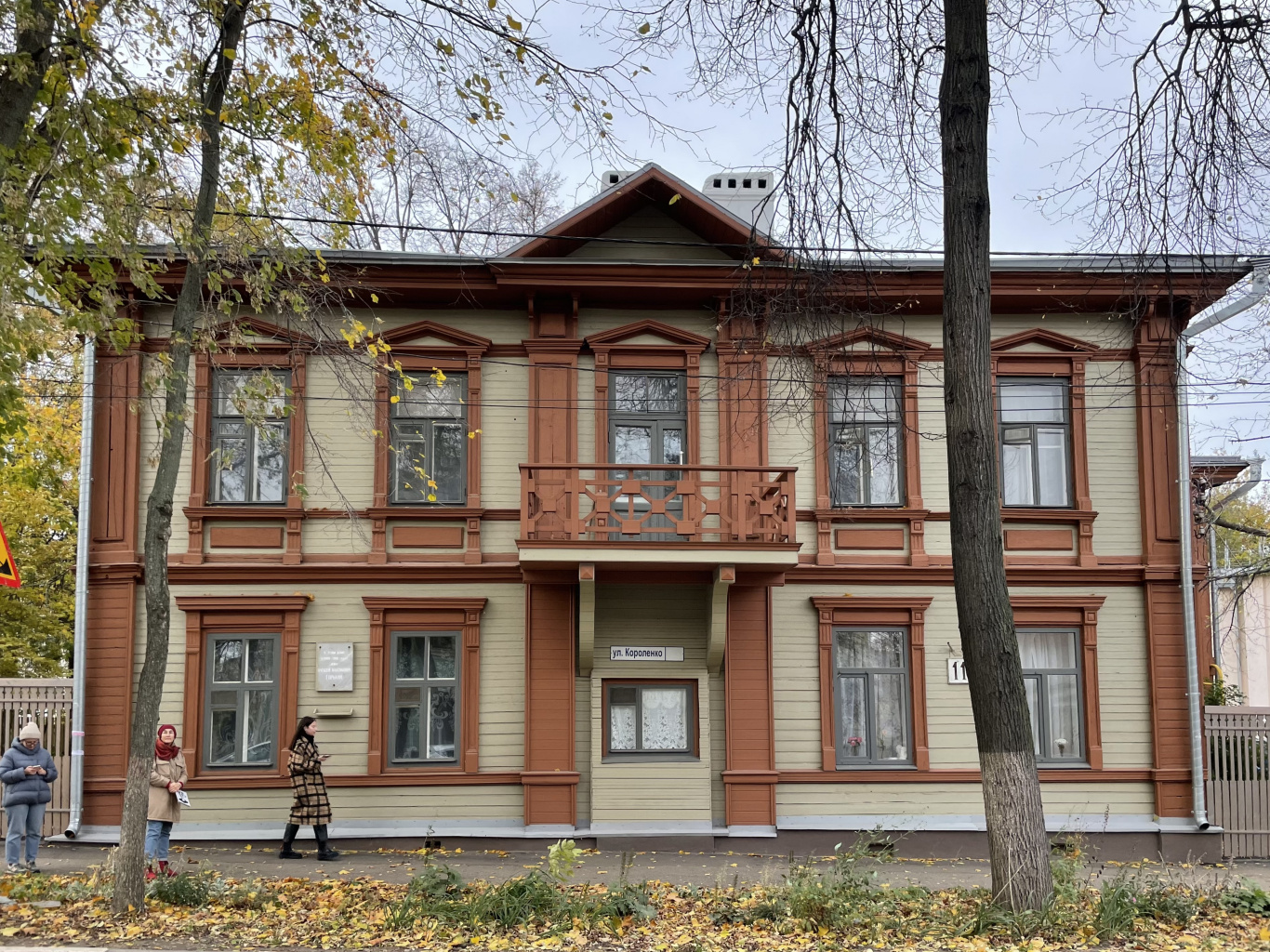 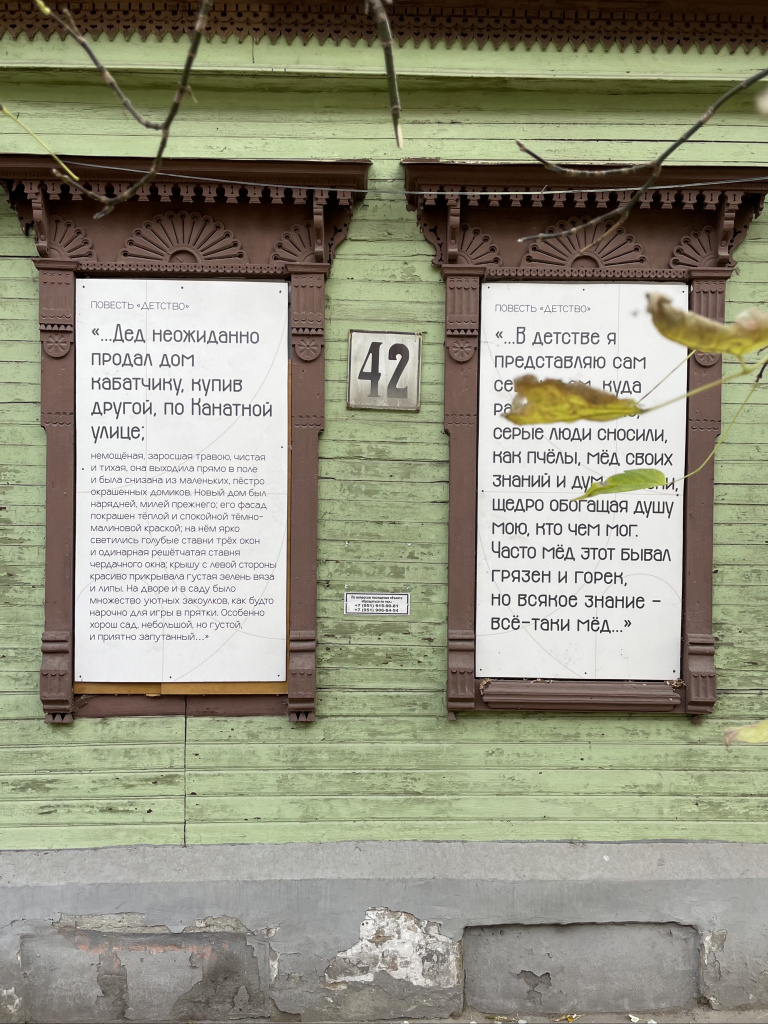 At the corner of Korolenko Street, there is a house that belonged to architect Vladimir Lemke. Built in the classicism style, it is made entirely of wood, including porticos, grooved lines, diamond-pointed rustications and dentels encircling the roof. Naturally, it would be much cheaper to have all these decorations made of plaster, but a talented architect has his house built from wood. Back in the 19th century, people in Nizhny Novgorod believed that wooden houses were ‘better for health’. 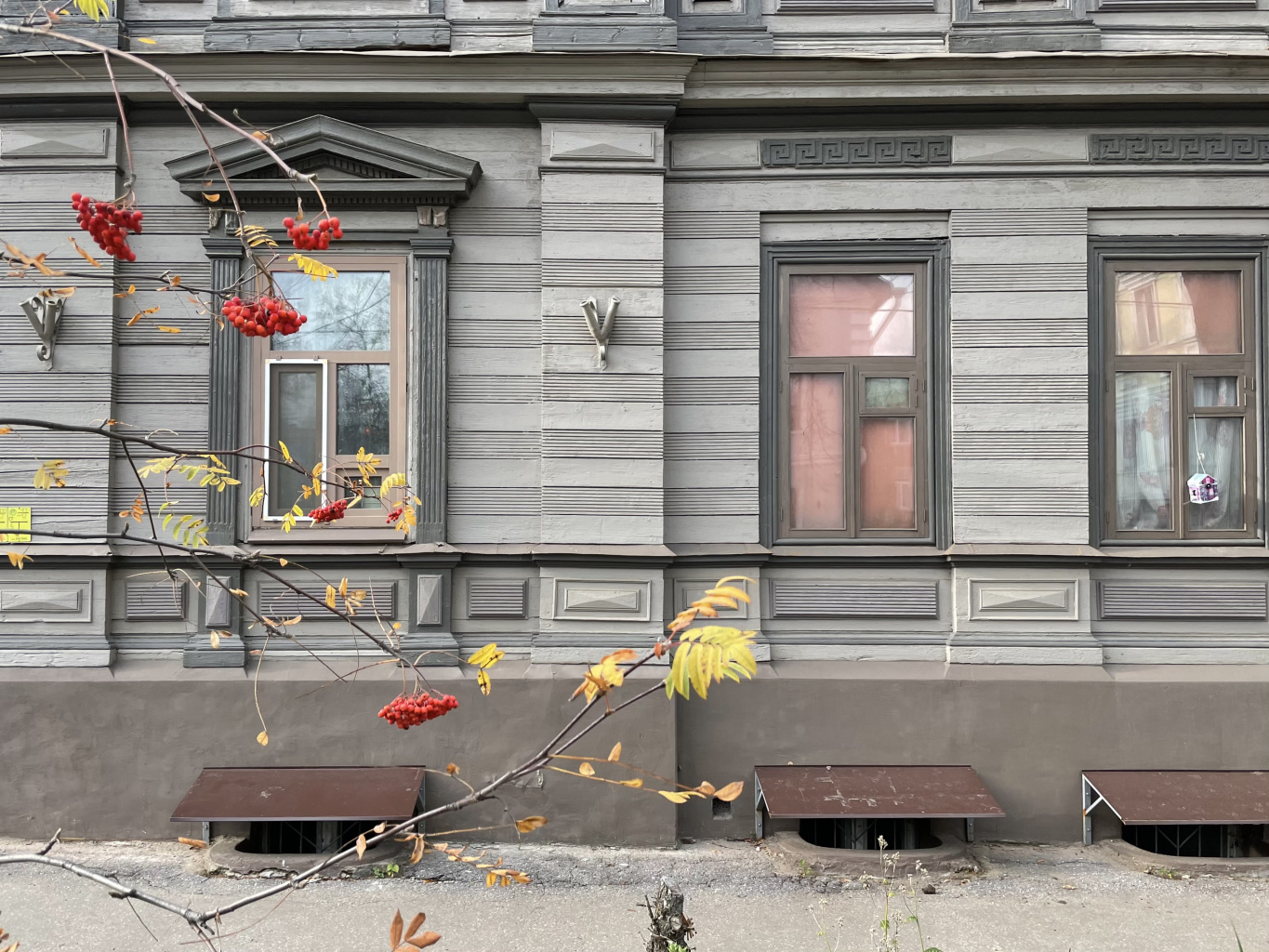 And as life shows, little seems to have changed. For example, the house in Novaya Street was built in 1847 and belonged to Maria Vasilyeva, the collegiate assessor’s wife. This means that her husband, an official, registered the house to his ‘stay-at-home’ wife, so that no one could confiscate the house. Doesn’t this situation seem familiar? And there is also a nice house registered as a one-storied building. However, under its roof there are two additional floors; this registration helped the owner save on taxes. 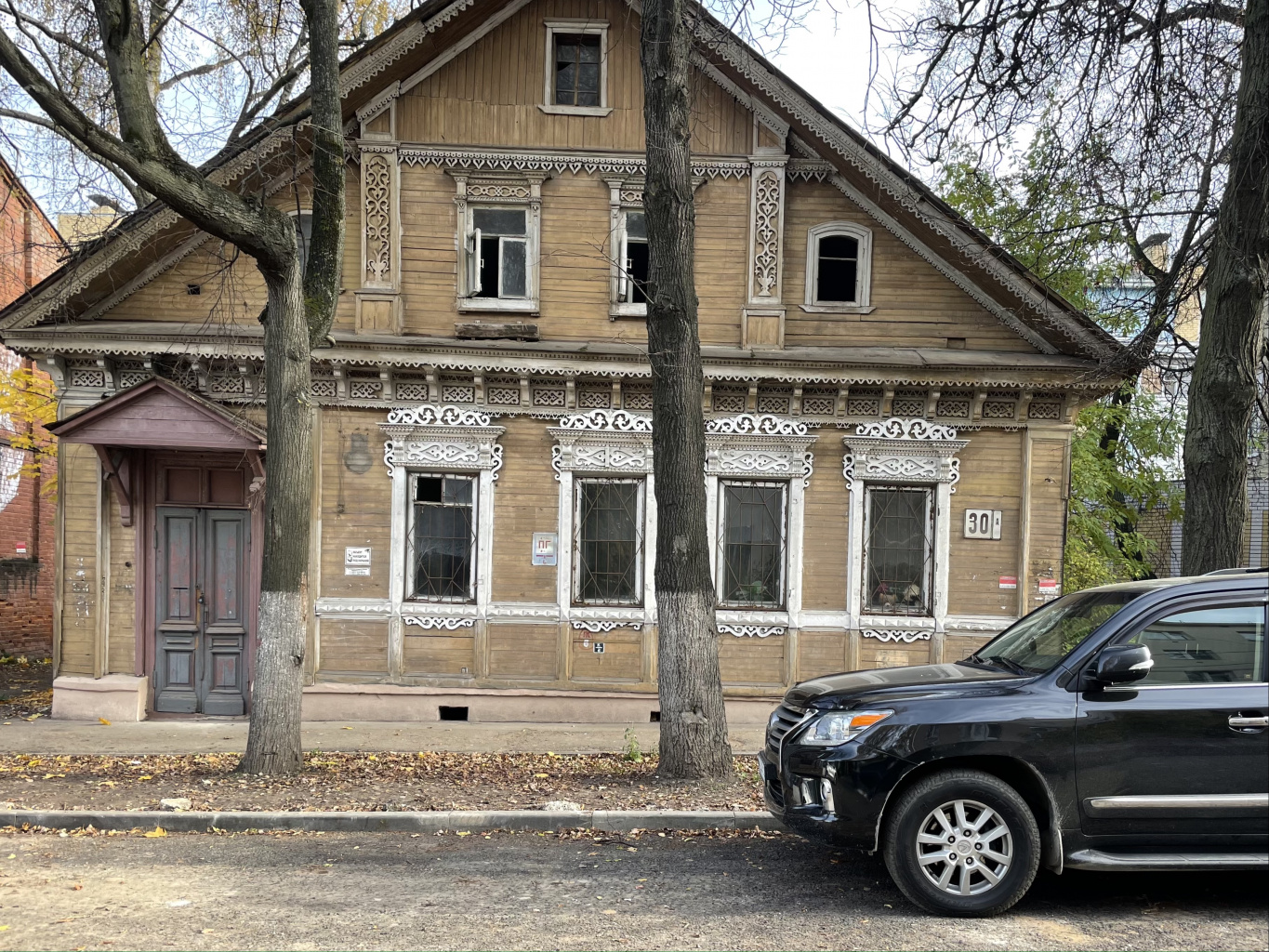 “In the Protected Quarters you can understand how our ancestors lived. For example, at first, there were homesteads. This is a house in the middle of the courtyard with various buildings around like sheds, ice cellars, and so on. But soon people realized that it was possible to build rental houses, commercial apartment buildings, and houses were built right next to each other. Some of the rooms and apartments in them were rented out,” Tatiana explains.

To avoid fires, the walls between two houses were made of bricks. A few years ago, the participants of the Tom Sawyer Fest had an unusual discovery - on one of these walls, a window made from ‘Falconnier’ glass bricks (named after architect and engineer Gustave Falconnier, Switzerland) was preserved. It was made of special refractory glass bricks of an unusual wave-like shape. 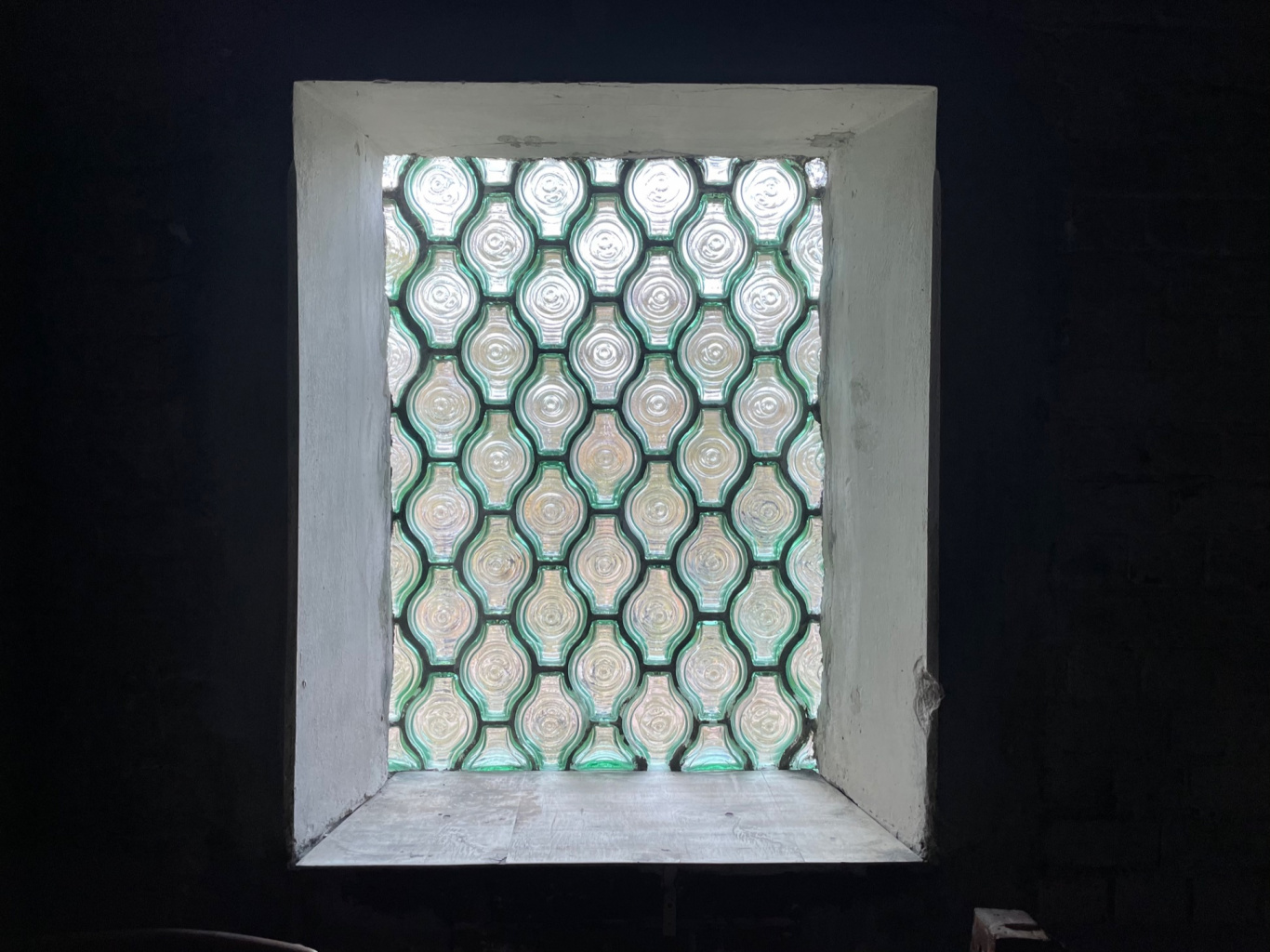 “Naturally, some glass bricks have been lost over the years. As part of the Tom Sawyer Fest this year, 360,000 roubles were collected to restore the ‘Falconnier’ window. To do this, glass bricks were ordered at one of the workshops of St. Petersburg,” says the guide of the Zapovednye Kvartaly company.