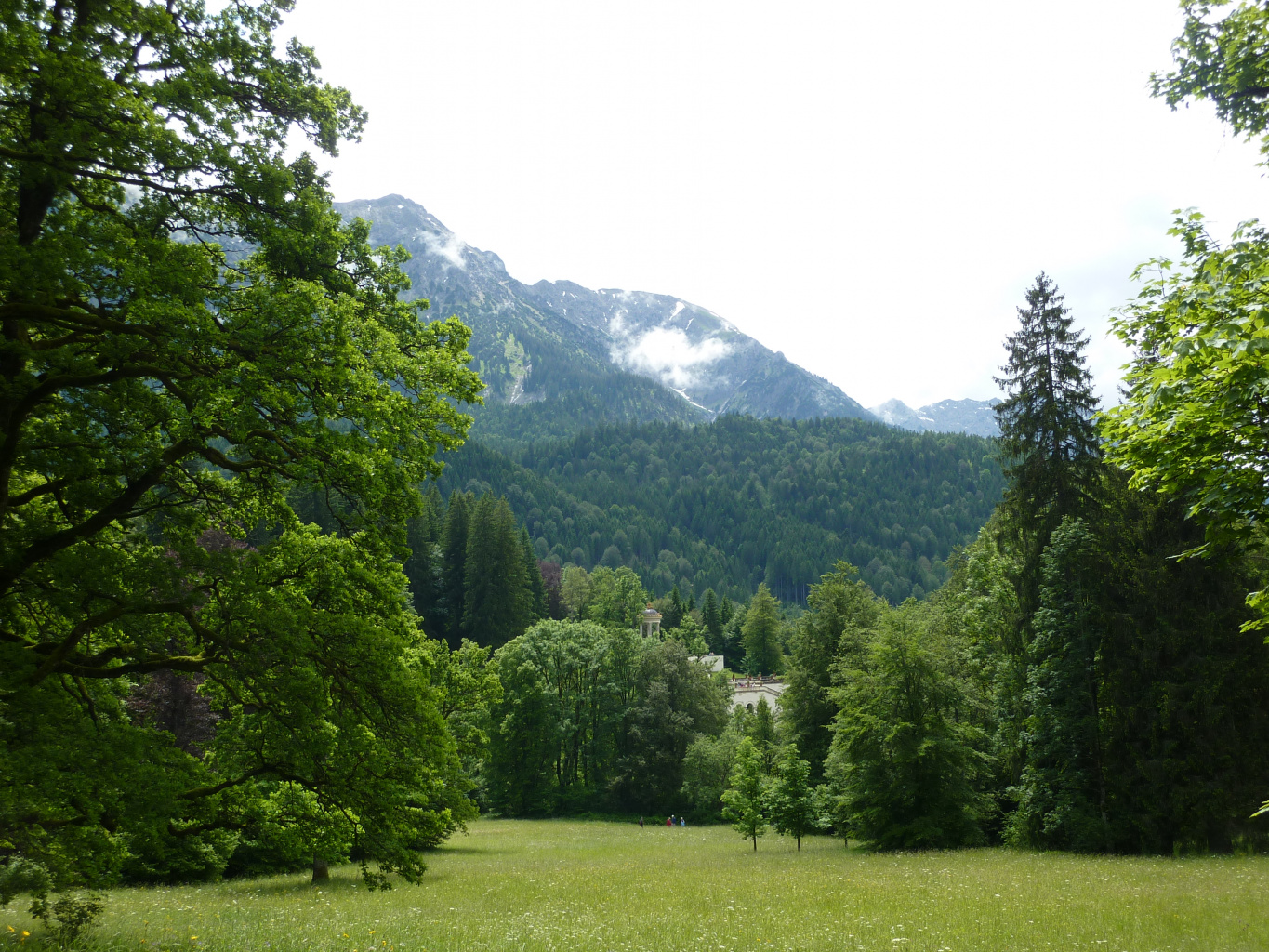 Majestic mountains, green alpine fields and pristine lakes - this is how Bavaria can be described in few words. But this picture can hardly be called complete without mentioning the beautiful palaces, fantastic castles that quite harmoniously blend into the alpine landscape.

The pearl of Bavaria, of course, is Neuschwanstein, a real magical castle that looks as if it is from the fairy tales, which can be quite easily explained. They say that Hans Christian Andersen came to read his fairy tales to Ludwig II of Bavaria who built this palace. 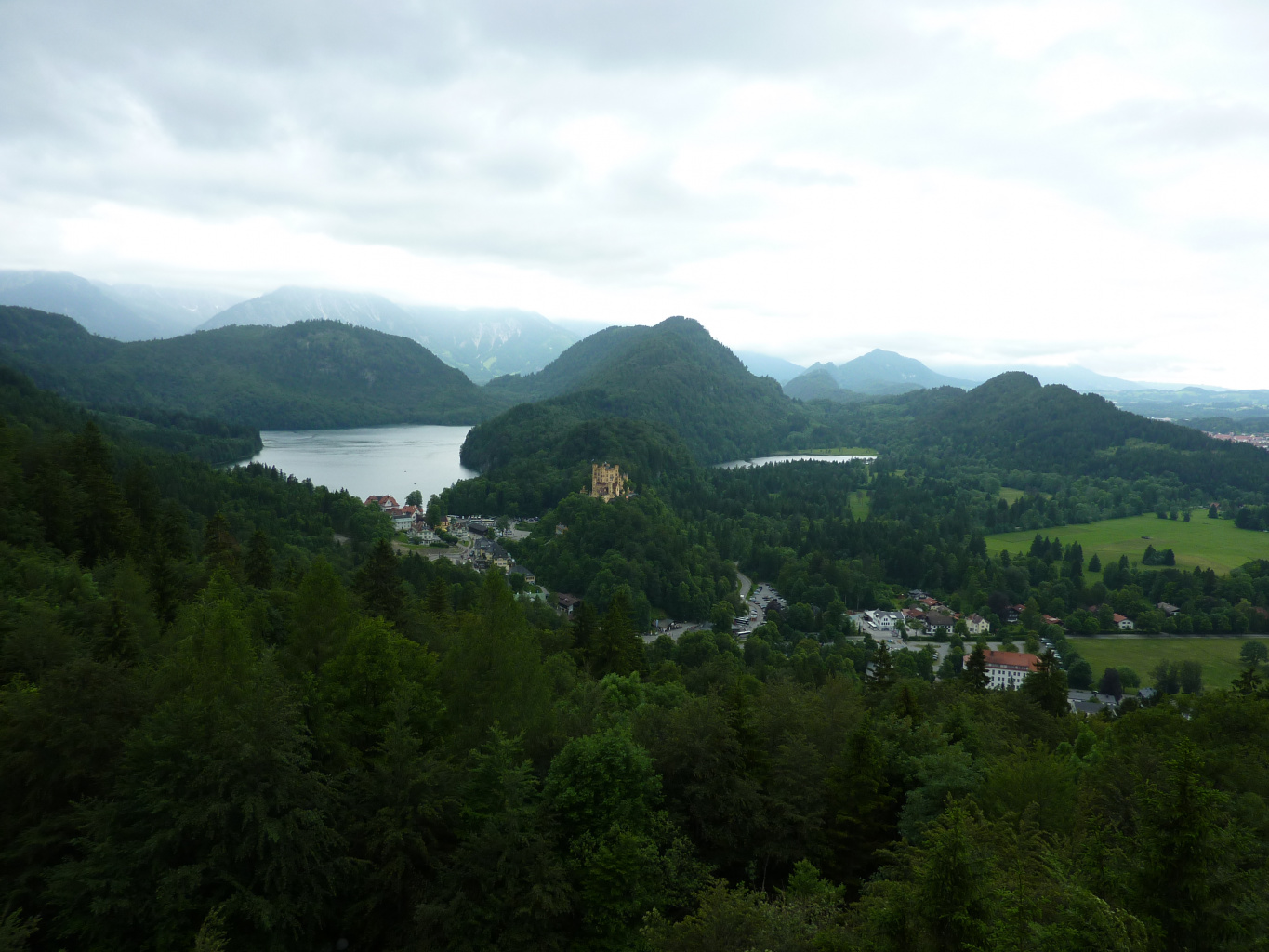 The “Fairy King” went down in history as a castle builder and the patron of the arts. He was friendly with Richard Wagner and admired his operas. In turn, the Ludwig’s masterpiece - Neuschwanstein (New Swan Cliff) built on the shore of the Schwansee (Swan Lake) inspired Pyotr I. Tchaikovsky to create his “Swan Lake”. In the 20th century, Walt Disney Studios chose the stylized image of this castle as their symbol, which appears in the first frames of each of its animated masterpieces. 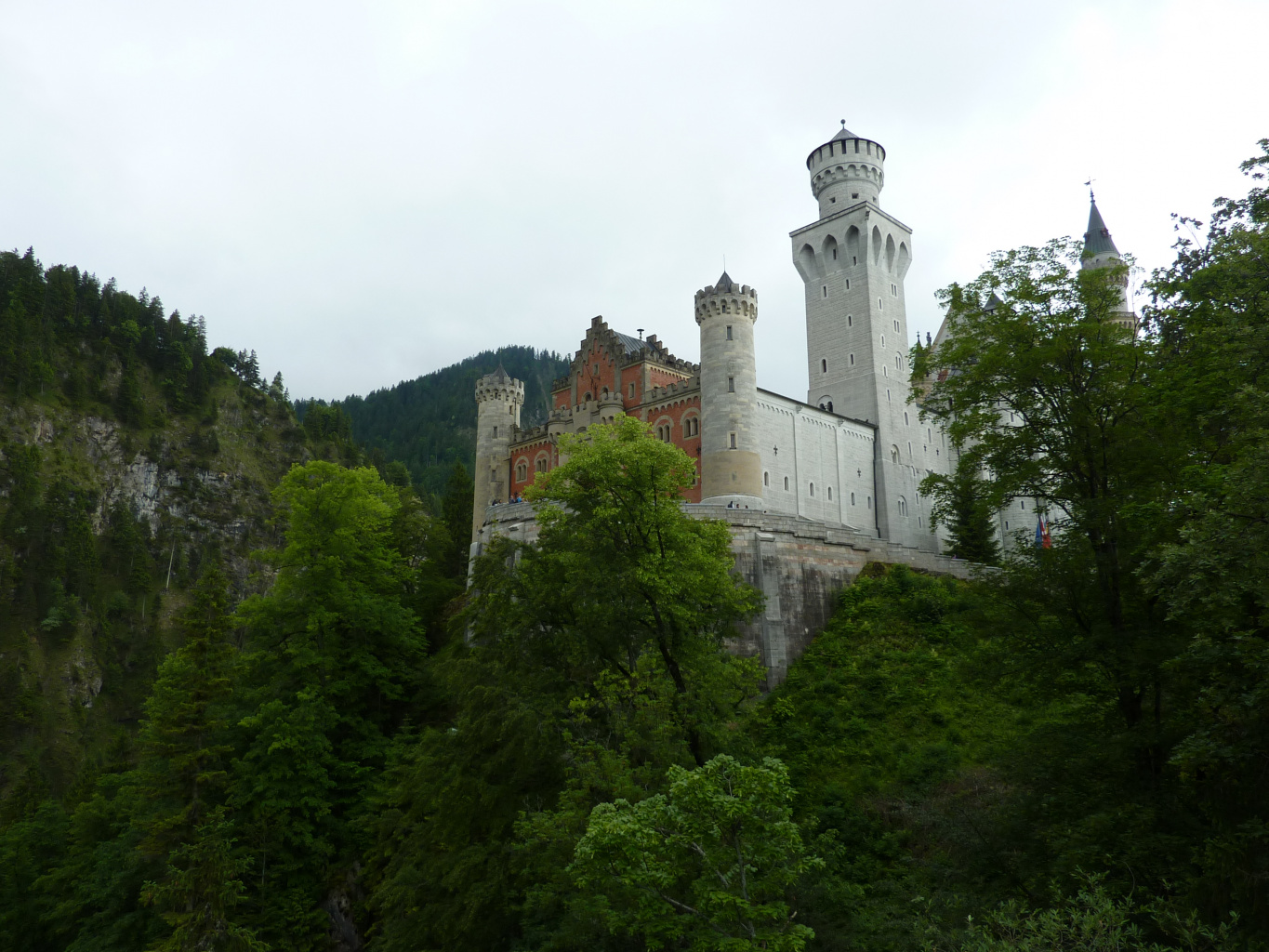 However, the history of the castle is rather a sad fairy tale. Handsome princes and charming princesses have never lived in it. Ludwig II of Bavaria was single and had no children. His only engagement to Princess Sophia, the sister of the famous Empress Elisabeth of Austria (nicknamed Sisi) was canceled. And Ludwig II was many times reproached for spending huge money to construct the castles. As a result, he was removed from the throne and died under mysterious circumstances. However, his creations are very popular now among tourists and bring fabulous revenues to the Bavarian treasury. 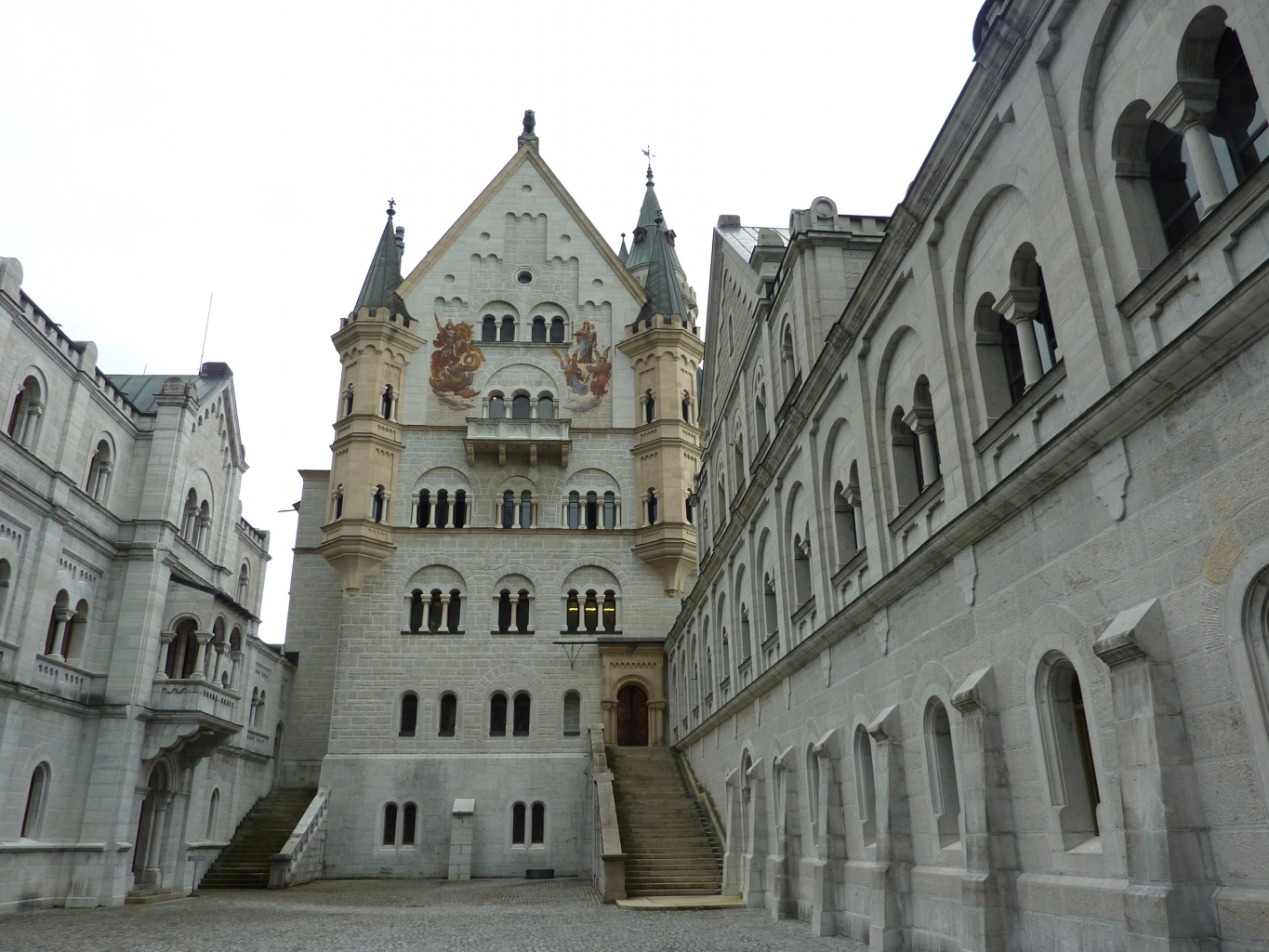 If you are planning to visit the Neuschwanstein Castle, then on the way to it, be sure to visit another castle, Hohenschwangau (High Swan Land), the historical residence of the Bavarian kings. Built by King Maximilian II of Bavaria, Ludwig’s father, on the site of the destroyed knight’s castle of the 12th century, it is located directly next to the Swan Lake. The future “Fairy King” spent his childhood in this romantic place. True, today Hohenschwangau, with its unusual architecture and amazing small towers, pales in comparison with the snow-white Neuschwashtein Castle towering into the sky. 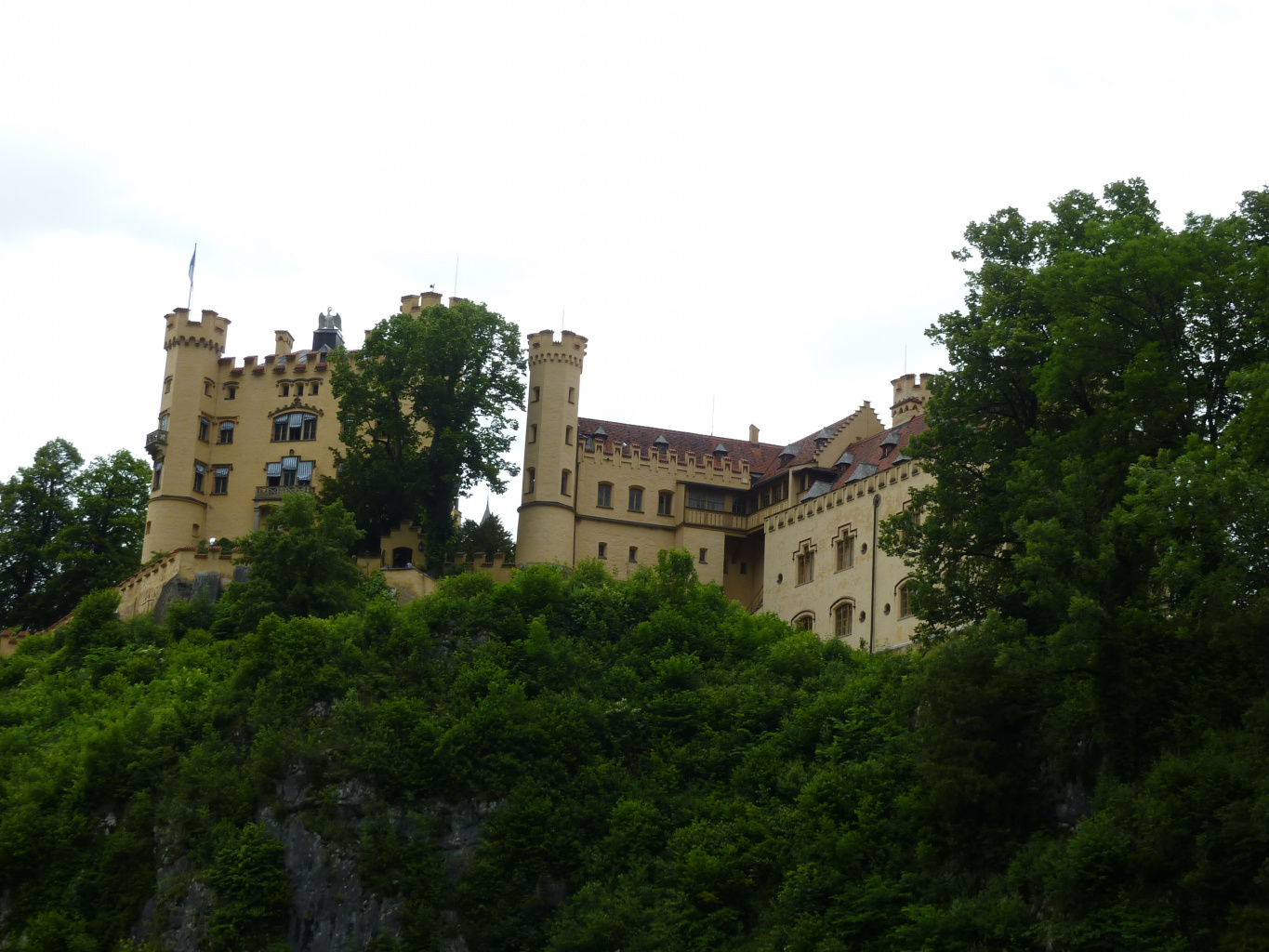 You have to climb up the rock to get to it. Although the rather gentle road is easy even for a child, and if you wish, a journey into a fairy tale can be even more romantic - by taking a horse-drawn carriage ride.

Here, at the top, there are many viewing platforms, the most interesting of which is the suspension bridge; you can clearly see both the Castle and the surroundings. You can also enjoy the stunning views from the Neuschweistein Castle.

Ludwig II of Bavaria strove to imitate the French monarch Louis XIV in everything. It is said that he conceived the construction of the Linderhof Palace in the west of Neuschwanstein as a copy of the Palace of Versailles and he recreated the atmosphere of the court of the Sun King. However, Linderhof reminded me rather the Great Palace in Peterhof in Russia, with its buildings of different height, endlessly descending stairs and the fountains. The sea space stretching in front of Peterhof brings out its grandeur and beauty, but Linderhof looks just like a toy palace against the background of the very high Alps.

The Palace and the Park create a unique atmosphere of beauty, refinement of forms, privacy and comfort. Linderhof, by the way, is Ludwig’s smallest palace and the only project that was fully implemented during his life.

Walking around the Palace, you will unexpectedly see that the Park ended and you are making a real long walk through the fields and foothills, enjoying the unique alpine scenery.

Ludwig was really a “Fairy King” and he could not stop at the achieved results. Before finishing the construction of Linderhof, he decided to recreate the real Palace of Versailles in Bavaria, to build an absolutely exact copy of it.

This idea was implemented on the largest island on Lake Chiemsee. And although the palace was never fully completed (it has no side wings and extensions), it is an ideal copy of the French kings’ residence. Looking at the palace, picturesque park, fountains and sculptures, it is difficult to get rid of the thought that you are in the suburbs of Paris right now. Only the wide meadows in front of you with grazing cows and the Alps rising in the distance bring you back to reality. By the way, the palace is a complete copy of Versailles, not only outside, but also inside. Nobody has ever lived there, so it seems that the rooms of the Bavarian Versailles are even more luxurious than those of the real Versailles. Unfortunately, taking pictures inside the palace is strictly prohibited – so, you need to go and see this miracle with your own eyes. 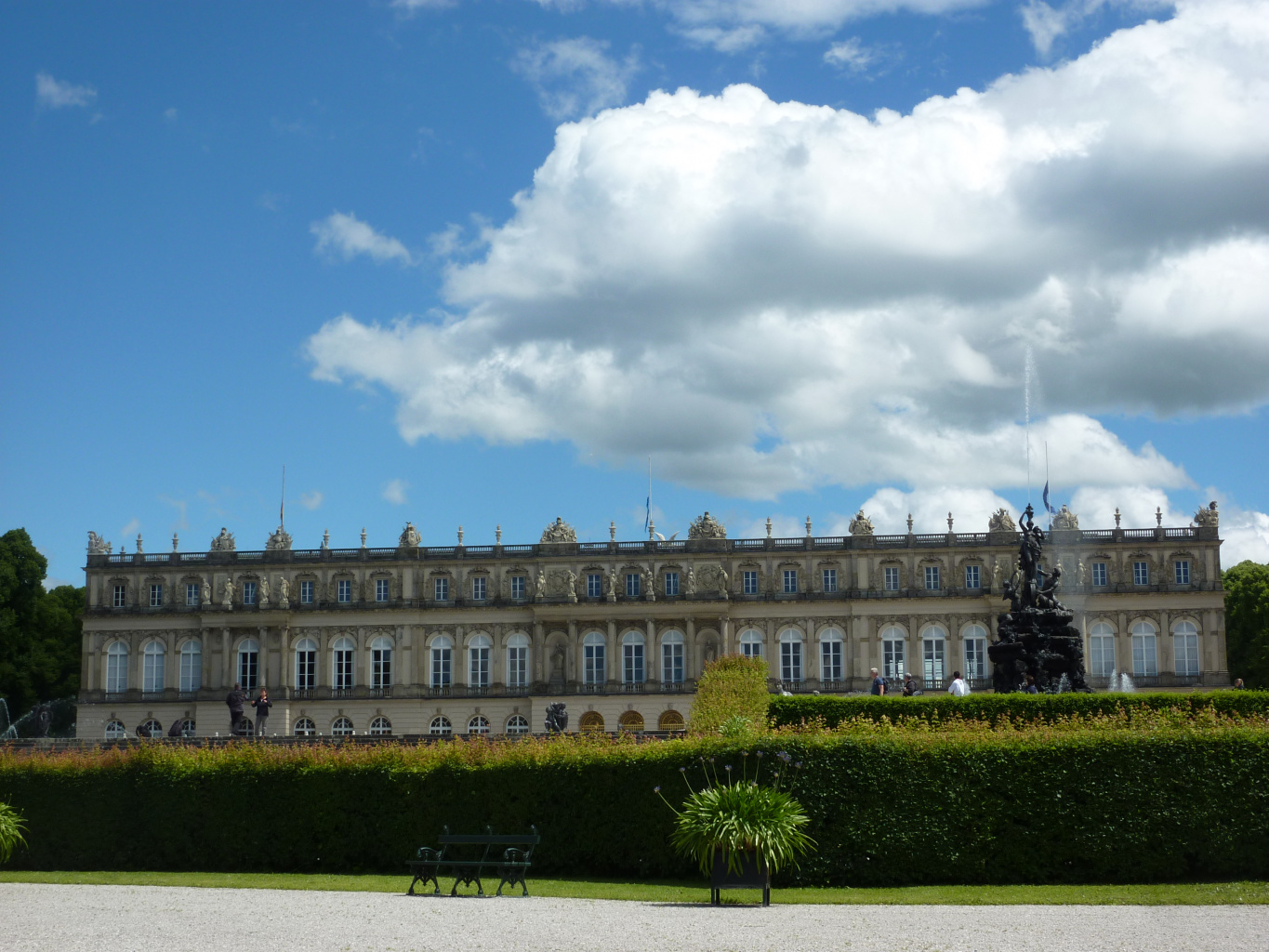 When travelling around Bavaria, be sure to visit the town of Oberammergau. The road will lead you here if you go to Linderhof by public transport. The suburban train from Munich comes exactly to Oberammergau, where you need to make a change for a bus. Most importantly, be sure to plan at least a short walk through this scenic place. The facades of the houses in the town are decorated with beautiful ornaments and frescoes depicting biblical, historical scenes and fairy tales. While walking around the town and looking at the pictures on the walls of houses, it is a special pleasure to see the landscape and things reminding you of the pictures in the fairy tales you love from your childhood. The main one is undoubtedly the house of the “Little Red Ridinghood”. 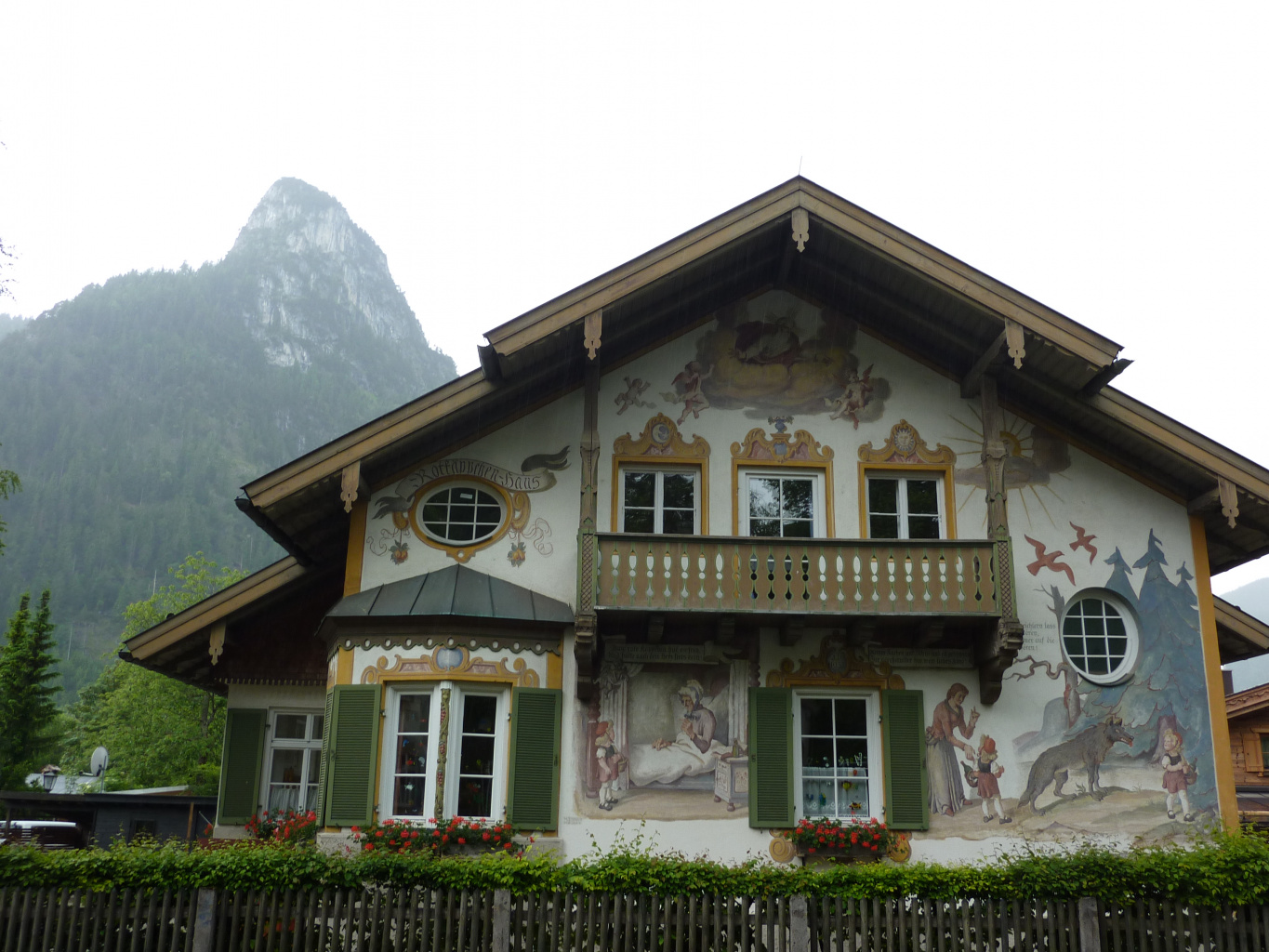 The whole trip around Bavaria is like a fairy tale. In Munich, with its magnificent palaces, towers going up “into the sky” and ancient gates, you feel the atmosphere of a fest. As soon as you leave the city, you find yourself in Bamberg - Bavarian Venice - or in the ancient fortress town of Nurnberg where everything is filled with the Dürer’s magical creativity. However, the really fairytale town, perhaps, is Rothenburg ob der Tauber with its special atmosphere. This nice and very friendly town has been carefully preserved and restored - as if it had been “frozen” in its medieval appearance. By the way, the filming of Harry Potter took place in this town. The Museum of Christmas is open all year round here, and its shop always offers all the necessary decorations for the main magical holiday. 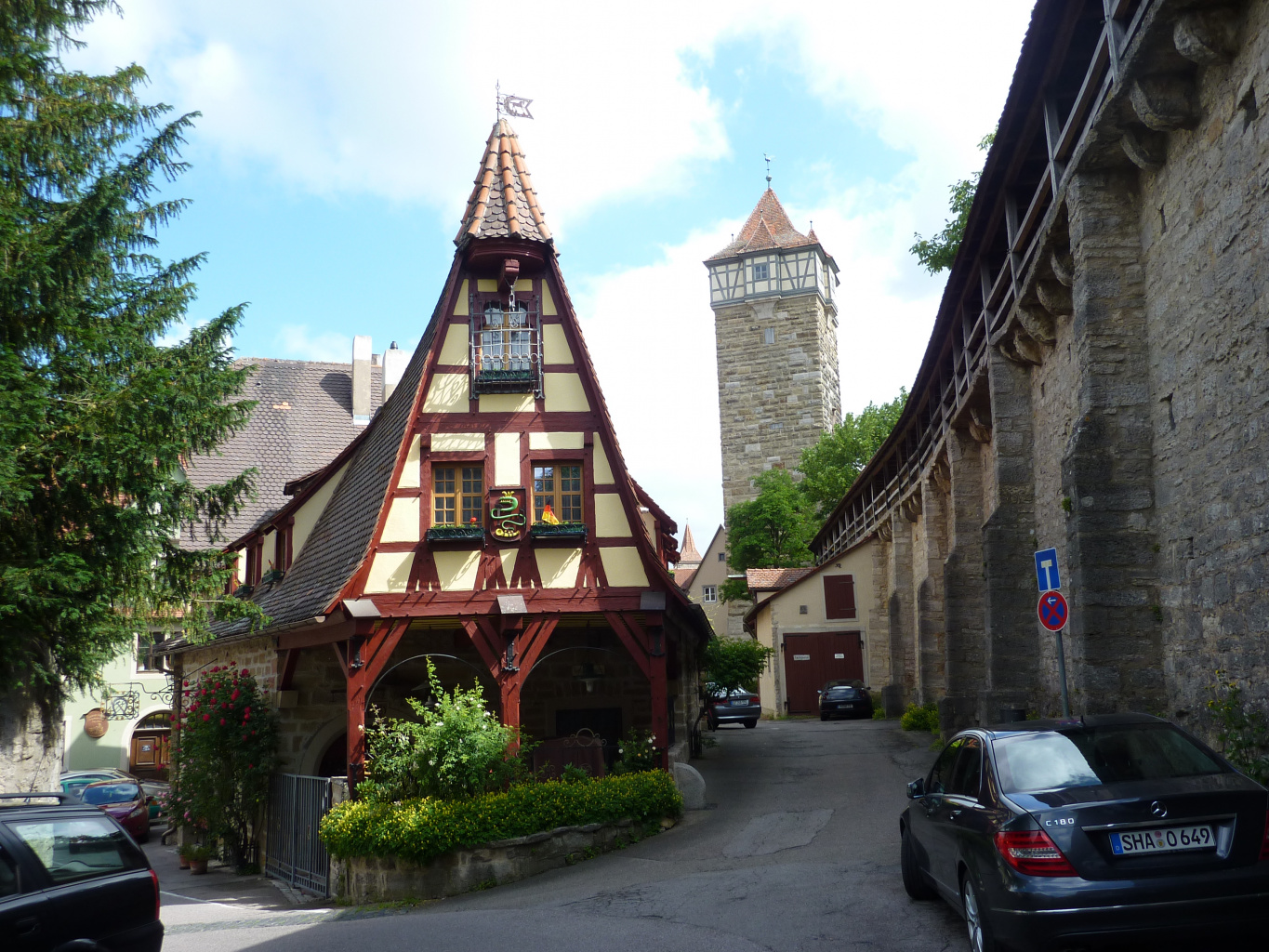 A walk in the Rothenburg’s neighbourhoods is no less amazing. In the Tauber Valley, around the town, there is an easy 4-km walking or cycling trail, which allows you to enjoy the views of the town and nature.

There are also houses featuring a very interesting architecture. For example, we saw a fancy house on a very high basement. It turned out, the house “on a chicken leg”, as we called it, is a small castle of the burgomaster Toppler, one of the most ancient buildings in these places, built in the style characteristic of fortresses standing in water or surrounded by moats. This architectural solution helped defend against enemies and withstand long sieges. 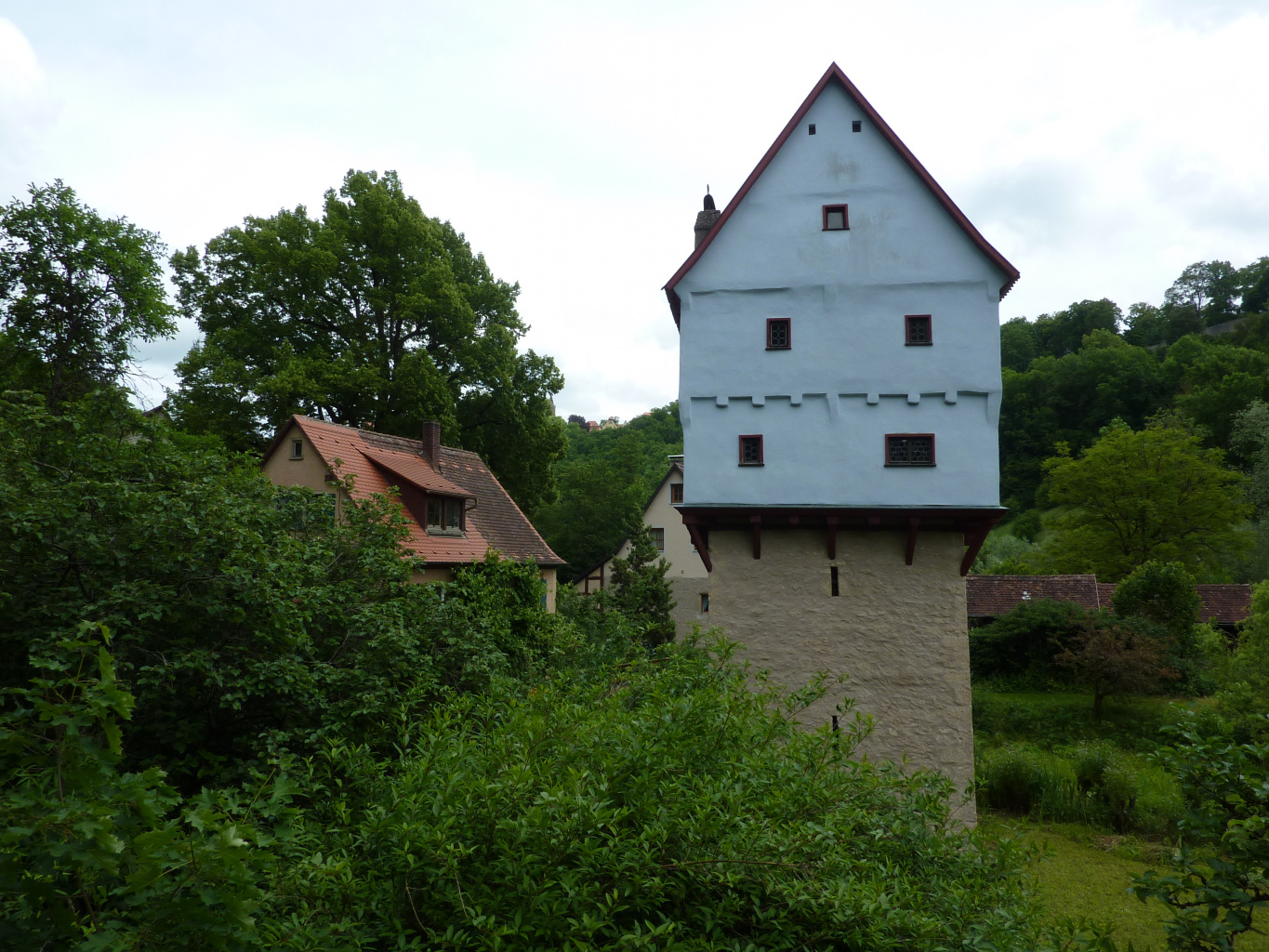 Bavaria has so many wonderful discoveries in store for its guests. Our trip lasted for about 10 days, but even this time was not enough to pay at least a short visit to all the attractions of this wonderful German region. I hope this fairy tale will continue. 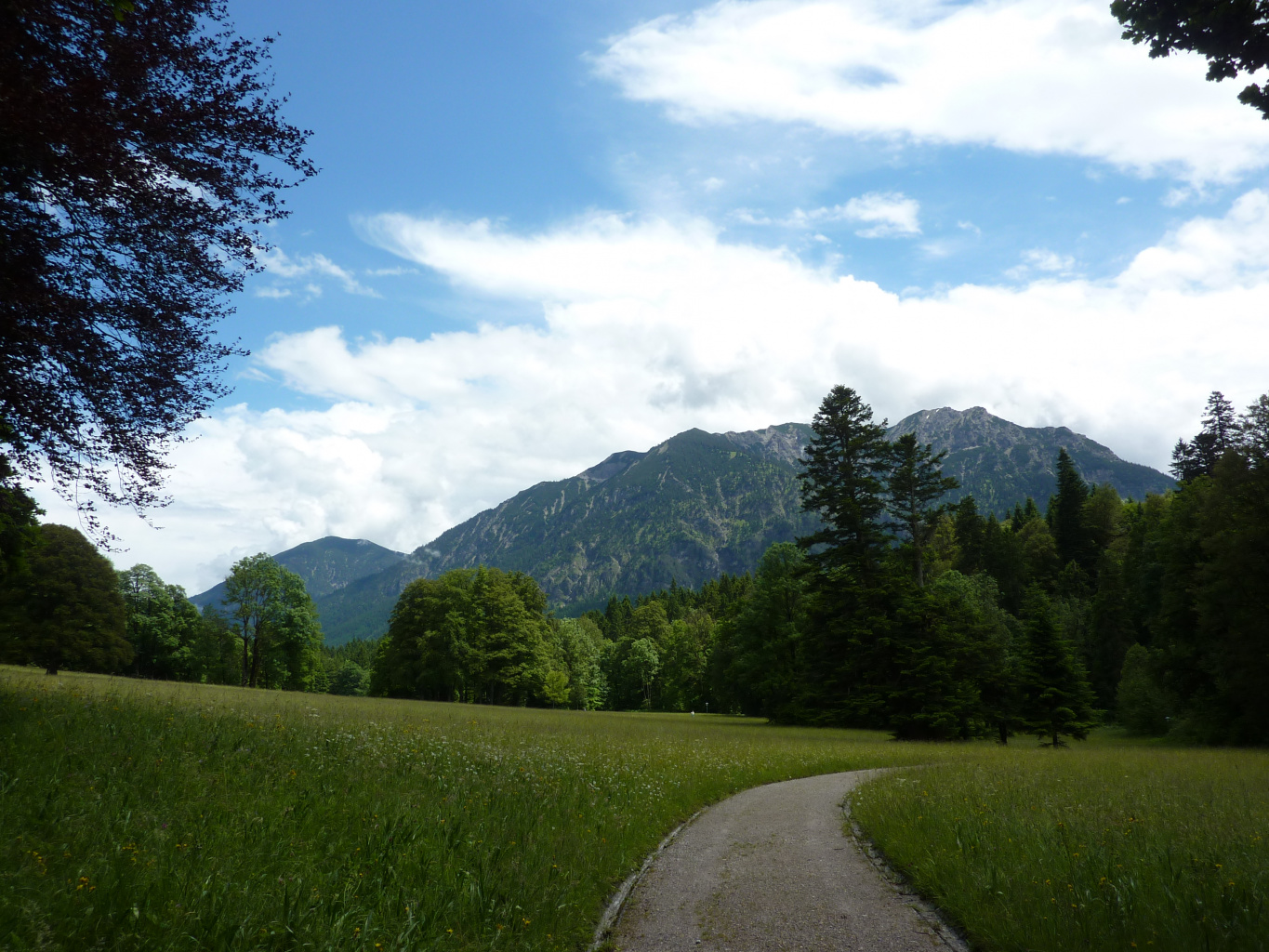