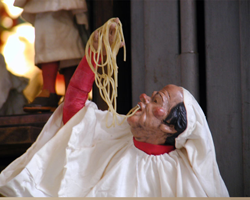 The restaurant Terra Nera, which has become the hallmark of Paris, after more than seven months of forced closure due to the pandemic, COVID-19 is once again inviting lovers of Italian cuisine.

The restaurant became famous all over the world thanks to the TV series «Emily in Paris».

The restaurant, which opened in 1978 in the premises of a former butcher shop, was not able to resume receiving visitors on May 19, as other Parisian cafes and restaurants did - with the permission of the authorities. The reason is simple: Terra Nera was filming the second season of the popular TV series.

In this romantic comedy, a young American woman who does not know a word of French, Emily, played by Lily Collins, the daughter of musician Phil Collins, lands in the "city of light", where she falls under the spell of her neighbor Gabriel, the chef of Terra Nera. He is played by French actor Lucas Bravo.

Alexander Shishlo
# France,Europe
More
06-14-2021
The first nature reserve in the Russian North is 90 years old
One of the oldest reserves in Russia "Kivach" celebrated its 90th anniversary on Friday
06-11-2021
North Atlantic whales are shrinking
06-11-2021
United Airlines launches daily direct flights to Johannesburg in a boost to SA tourism
United Airlines has launched a new daily direct flight from New York/Newark Liberty International Airport and O.R. Tambo International Airport, in Johannesburg
06-11-2021
Krabi looks to capitalize on the return of travellers
Krabi is next in line, waiting to follow Phuket, to open its doors to the international travellers
06-11-2021
Tourists can get vaccinated against covid in the resorts of the Krasnodar Territory
Vaccinations with five Russian vaccines (including "Sputnik V"), two of which - "Gam-Covid-Vac" and "EpiVacCorona" - are allowed for people over 60 years old
06-11-2021
The Rosa Khutor resort in Sochi to celebrate Global Wellness Day
The World Wellness Day has been held under the slogan: “One Day Can Change Your Life” for 10 years in a row and makes everyone think about a better quality of life
Exclusive
Inna Svyatenko: The development of ecotourism requires integrated solutions
﻿The senator believes that the Russian resorts require a special system of the state regulation and support
Expert Reports
Here’s how countries around the world are reopening...
About the various countries that plan to return to normal life and reopen the borders - a list of places where and when you can go