Winter beaches will open in Sochi 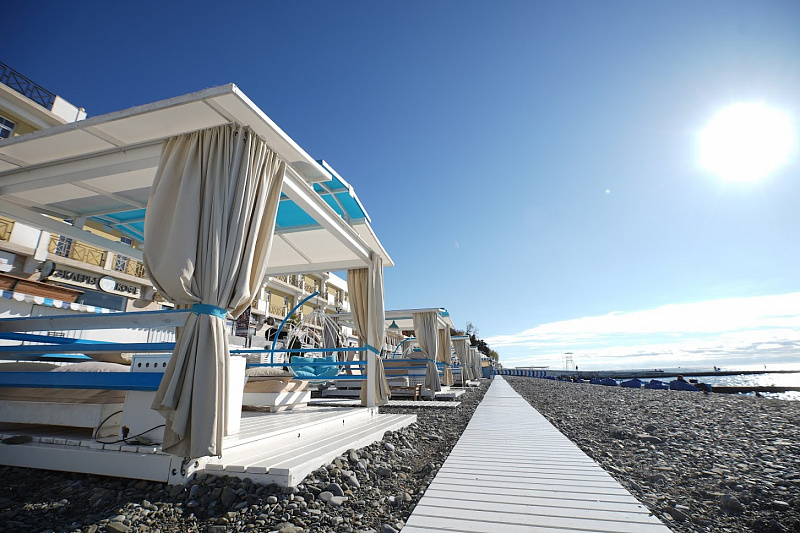 They will increase the number of comfortable benches, places for sports, photo zones, as well as public toilets. All winter beaches will host open sports training, yoga, Nordic walking and other outdoor activities. Specialized organizations will ensure the increased sanitary maintenance of these territories.

«In the upcoming winter season, 37 large tourist display facilities in the mountainous and coastal clusters will continue to operate in Sochi. The most famous of them are the resorts Rosa Khutor, Krasnaya Polyana, Gazprom, Aviary Complex, Skypark, Solohaul Park, Arboretum, Riviera Park, a tower on Mount Akhun. By the end of 2021, it is planned to launch about 15 new tourist and excursion routes, five of them in the Lazarevsky district, the Sochi administration said.

Thus, PJSC Gazprom plans to open new ski slopes. Under favorable weather conditions guests will be able to ski from the peak of 2256 meters to the lower station 550 meters, which will significantly increase the area of ​​evening skiing, and the total length of illuminated slopes will exceed 10 km. In addition, the highest mountain Christmas tree in Russia will be installed here.

In turn, NJSC "Krasnaya Polyana" plans to update the roll-out zone at Polyana 960 with an extended après-ski area and the opening of a snow park that will operate throughout the winter season. On the southern slope of Rosa Khutor, the ski area will be extended by another 2.5 km of tracks.

It is expected that by the end of 2021 the 2019 tourist flow rate will be reached: Sochi will receive more than 6.5 million people.

Igor Sizov
# Russia
More
10-27-2021
Paris Metro abandons traditional tickets
Since October 15, the usual "books" of 10 travel tickets for residents of the French capital have been disappearing in the ticket offices of the Paris metro
10-26-2021
Cape Town’s Table Mountain named Africa’s leading tourist attraction
The iconic Table Mountain in South Africa has been named Africa's leading tourist attraction by the World Travel Awards
10-26-2021
The first glamping was opened in the Smolensk region
The «Ruchyi» glamping, the first in the region, appeared in the Smolenskoe Poozerie National Park on the shores of Lake Rytoye
10-26-2021
Tourism in Greece is on the rise
The number of arrivals of foreign tourists to Greece in the first eight months of this year increased by almost 80% compared to the same period in 2020
10-26-2021
Survey: China showing remarkable consumer confidence for travel restart
A survey was carried out by independent market intelligence firm AudienceNet on behalf of Cirium
10-25-2021
New coronavirus restrictions were launched in the Krasnodar Territory
The decree was signed by the head of the region, Veniamin Kondratyev
Exclusive
Electric transport in Russia
﻿Vadim Petrov, Member of the Ecological Chamber of Russia, shares his vision of the prospects for the non-polluting transport development in the country
Expert Reports
﻿Returning to Egypt
The cost of tours to the Red Sea is not yet as cheap as we would expect