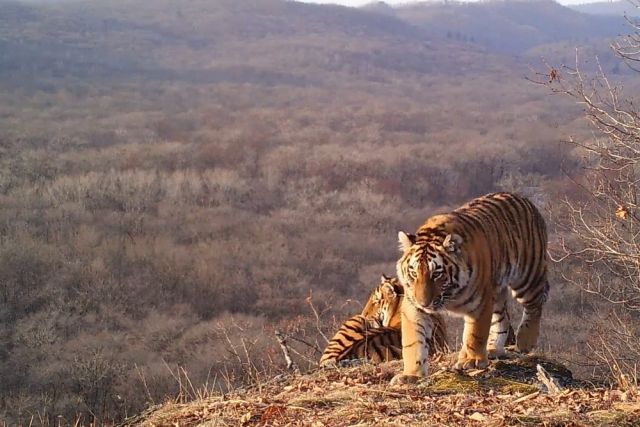 Source: The Land of the Leopard

A new nature reserve of regional significance "Komissarovsky" was formed in Primorsky Krai. As reported to EcoTourisme Expert, environmentalists hope that the new special protected natural area will not only preserve but also increase the population of two rare cats at once - the Amur tiger and the Amur leopard.

According to the director general of the «Amur Tiger» Center Sergey Aramilev, the new status of the territory, which included the Komissarovsky reserve, will not allow industrial development in the area.

“This valuable forest will become a safe place for cross-border groups of the Amur tiger and, possibly, in the future, the Amur leopard,” he said.

In addition to preserving and increasing the population of Amur tigers and leopards, the reserve will monitor endangered species of plants and animals. Moreover, specialists will carry out research work. The reserve was created with the support of the World Wildlife Fund of Russia (WWF Russia).

In his turn, the director of the department for the protection, control and regulation of use of wildlife in the Primorsky Krai, Dmitry Pankratov, noted that “now the Red Book animals living in the territory of this region, in particular the Amur tiger, can freely move from China to Russia and in the opposite direction”. He promised that the Department of Hunting Supervision would take all measures and efforts to quickly examine the territory and organize its effective protection for the benefit of the Amur tiger.

The Komissarovsky Reserve is located on the territory of the Pogranichny District and Khankaisk District of Primorsky Krai. These two are the key habitats of the rare cats. The total area of ​​the new reserve is more than 82.9 thousand hectares.

The Komissarovsky reserve is a unique special protected natural area founded in the framework of Russia-China cooperation to protect the area’s biodiversity.

Previously, the «Land of the Leopard» National Park and the «Sredneussuriysky» reserve were formed as part of the initiative. Now, there are 11 special protected natural areas of regional importance in the area.