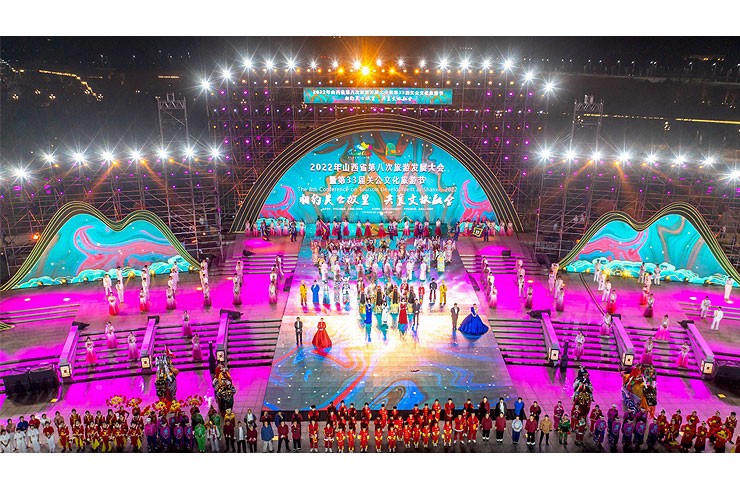 The 2022 Shanxi Provincial Tourism Development Conference and the 33rd Guangong Cultural Tourism Festival were successfully held in Yuncheng City from September 21 to 23.

Lan Fo'an, Deputy Secretary of the Shanxi Provincial Party Committee and Governor, stressed that today's Shanxi is increasingly showing a magnificent picture of economic prosperity, social harmony, ecological beauty, openness, innovation, and vitality to the world. Today's Yuncheng City is slowly unfolding a beautiful picture of high-quality economic and social development. The mountains and rivers on the surface and the land of Hedong have become tourist resorts and vacations and hot lands for investment and development.

On the evening of September 21, Xiezhou Guansheng Cultural Square under the night was lit and colorful, and the land of Hedong welcomed guests from all over the world in a warm atmosphere. At the opening ceremony, Chinese traditional culture was displayed and performed, taking the development of Chinese civilization as the context. The four chapters themed "The Earliest Called China", "Colorful Salt Pool Unique", "Loyalty, Righteousness, Benevolence and Bravely Counting Guan Gong" and "The River Flows Eastward" interpreted the beautiful legends on the land of Hedong, showing the inheritance, promotion and development of Chinese civilization for 5,000 years.

Yuncheng was first called China here; the colorful salt pond is unique; there is loyal, benevolent and brave Guan Gong; and the river flows eastward from here; Yuncheng is an "international tourist destination" and worth visiting. The three "golden signboards", Guangong culture, the magnificent scenery of the Salt Lake, and the customs of the Yellow River, are vivid portrayal of Yuncheng's profound historical and cultural heritage. The Jiuqu Yellow River turned eastward, and the Chinese civilization swayed all the way from here. Through the Han wind and Tang rain and the sound of Song Yun, Yuncheng is the theme park of China's 5,000-year-old civilization. As the saying goes, if you don't go to Yuncheng, you don't really go to China; you can't go to China without visiting Yuncheng.

Shanxi, with its magnificent surface of mountains and rivers, has nurtured China's 5,000 years of civilization. Taking the opportunity of the Tourism and Development Conference, we will continue to promote the high-quality development of culture and tourism in an all-round way and build Shanxi Province into an internationally renowned cultural tourism destination.

Aruna Gaitonde
# Asia
More
11-25-2022
Gastronomic festival "Autumn stories" will be held in the mountains of Sochi at the resort "Rosa Khutor"
From November 17 to November 30, nine restaurants of the complex will have special offers that will allow guests to taste exclusive gastronomic sets with discounts from 10 to 20%
11-25-2022
’Race the Pearl‘ in Sri Lanka concludes with the French-British domination
The fifth edition of Race the Pearl, the 24-hour race that covers the entire length of 600 kilometers of Sri Lanka from top to bottom, concluded on 6th Nov 2022 successfully with Toby Read from UK Winning with the timing of 23 hrs and 06 minutes and Frenchman Fabrice Linon coming second with timing of 23 hrs and 46 mins
11-24-2022
Walrus Day celebrated by Arctic national parks in Russia
The themed holiday takes place annually on November 24 and is established to raise awareness of the environmental issues causing the decline of this species
11-24-2022
Minks, otters and beavers will be counted in the Bashkir reserve
State inspectors will go through 12 routes
11-24-2022
Photoquest "SnegirGO" starts in Moscow on the first day of winter
Mospriroda on its website announced the launch of a large-scale contest-quest #SnegirGO, timed to coincide with World Wildlife Day, which will be celebrated on March 3
11-24-2022
About 1.5 billion rubles required for the modernization of the infrastructure in Svalbard - the RF Ministry
Russia needs about 1.5 billion rubles to modernize the communal infrastructure of the settlements of Barentsburg and Pyramid on Svalbard, the Ministry of Regional Development of the Russian Federation estimated
Exclusive
The “Gate of Baikal” is wide open for tourists and investors are welcome
Alexander Lautin, Director General of the Irkutsk Region Development Corporation speaks about promising tourism projects in the Irkutsk Region
Expert Reports
Djibouti wants to become the epicenter of green tourism
The authorities of Djibouti intend to develop the economy of this African state, with amazingly preserved biodiversity, by attracting foreign tourists