Russian Railways has expanded the list of routes from Moscow and St. Petersburg 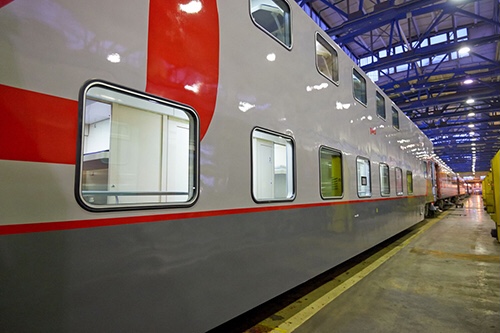 Double-deck trains now run on 21 routes instead of 15, according to the national travel portal Russia.travel.

A comfortable double-deck train runs from Moscow  to Yoshkar-Ola, Orenburg and Ulyanovsk. And from St. Petersburg  to Belgorod, Anapa or Kostroma.

From now on, 18 trains will run on the Moscow - St. Petersburg route, which is three more than in the outgoing year. Also, the press service of Russian Railways reported that the number of high-speed trains throughout the country will increase to 69.7%: now there will be 425, not 420, reports Russia.travel.

Julia Chuchalova
# Russia
More
05-20-2022
Handkerchiefs have blossomed in Sochi
In the Southern Cultures park, flowers appeared on a unique davidia nvolucrata called the handkerchief tree
05-20-2022
New cruise brand to debut in Singapore on 15 June ‘22
Resorts World Cruises, a new Asian luxury and dynamic lifestyle cruise brand will have its global debut in Singapore on 15 June 2022 with the Genting Dream
05-19-2022
The popularity of gastronomic tourism is growing in Russia
Domestic tourism in Russia grew by 30 percent in 2021
05-19-2022
Roe deer have bred near the plant in the Transbaikal
This indicates a low impact of the enterprise on wildlife
05-19-2022
TAT strives to boost tourism to Thailand from the Middle East market
The Tourism Authority of Thailand (TAT) is strengthening Thailand’s presence as the preferred tourist destination among Middle East travellers to drive interest in returning to Thailand in the post-COVID-19 situation
05-18-2022
Korea to allow visa-free entrance to Jeju & Yangyang from June 1
From June 1, 2022, travellers are allowed to enter Jeju and Yangyang visa-free via international airports
Exclusive
Time to enjoy ecotourism
Recently, outstanding issues of ecotourism have received an appropriate response and things are definitely on the move
Expert Reports
Tourism industry needs resetting
Russians can reorient themselves exclusively to domestic resorts