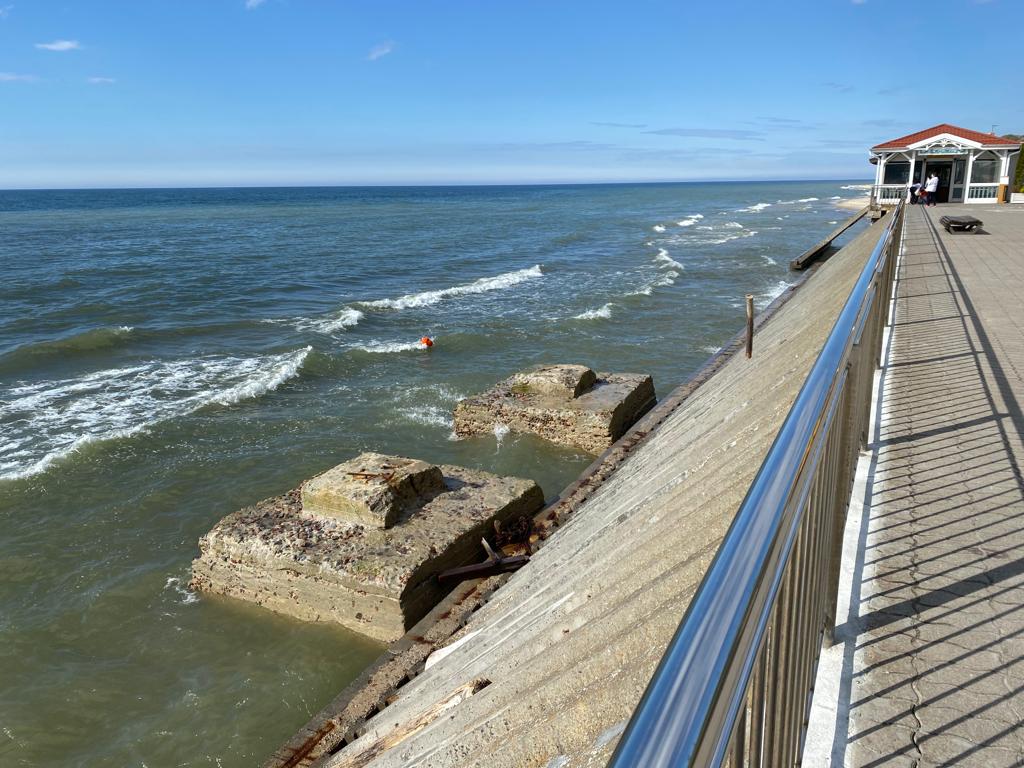 Source: https://iacgov.ru
The start of this work was given by the action to clean up the territory from garbage on the sea coast north of the promenade of the village of Lesnoy, which ended last weekend. Roszapovedtsentr reports this on its website.

Employees of the national park took out construction and household waste, collected scattered car tires in one place for subsequent disposal.

“The action carried out is the start of a great work, the purpose of which is to conduct a comprehensive bank protection in the area of ​​the village of Lesnaya and protect the unique ecosystem of the Curonian Spit from storms and other negative factors,” said Anatoly Kalina, director of the Curonian Spit National Park, whose words are quoted in the message.

As explained in Roszapovedtsentr, the narrow part of the Curonian Spit near the village of Lesnoy is characterized by a high degree of vulnerability. So, in 1975, a storm washed away the base of the old lighthouse, which tilted and was subsequently dismantled - today its concrete foundations are visible in the sea. During a storm in January 1983, the foredune in Lesnoy was completely washed out, and there was a threat of flooding the village. At that time, NPO Baltberegozashchita dumped 7,000 cubic meters of gravel at the site of the sea water breakthrough and installed the first reinforced concrete pile damper. To create bank protection structures adjacent to it, car tires were used, among other things.

“Subsequently, in this place, the sea annually demonstrated its destructive power, carrying away more sand during autumn-winter storms than it returned in spring and summer. Over time, the waves washed away the old structures. The summer cafe with a wooden promenade could not withstand the blows of the elements - at present, their remains have been completely dismantled.

The landscaping of the sea coast section north of the promenade of the village of Lesnoy will be carried out throughout 2023.

Julia Chuchalova
# Russia
More
02-01-2023
Tourism Malaysia kicks off its first roadshow in India from 30 Jan to 7 Feb 2023
Tourism Malaysia kicks off its first roadshow in India this year, alongside with the Malaysian Association of Tour & Travel Agents (MATTA) across five cities from 30th January to 7th February 2023
02-01-2023
Cambodia’s scuba diving industry to expand into the local market
Tourism making a big comeback in 2023 with some businesses shifting their focus to cater to domestic travellers past few pandemic years, while others found it difficult due to the nature of their services
01-31-2023
A premium resort complex will be created in Dagestan on the shores of the Caspian Sea
The implementation of the project of the resort complex of the premium segment "Palace Derbent" on the shores of the Caspian Sea was discussed during the trip of the working group of the corporation "Tourism.RF" to Dagestan
01-31-2023
Reserve experts urge the State Duma to postpone the second reading of the draft law on recreation in protected areas
The recently created Expert Council on Reserve Affairs sent an appeal to the leadership of the State Duma with a request not to submit for the second reading a draft law on regulating recreational activities in specially protected natural areas
01-31-2023
Mospriroda launches "Feathered audio guide"
The press service of Mospriroda said that in Moscow you can see about 270 species of birds, of which 88 species are listed in the Red Book of the capital
01-31-2023
The number of environmentally friendly passenger transport in Sochi will reach 500 units
This will happen due to the replacement of the rolling stock by buses running on methane
Exclusive
Downhill skiing to the whistle of the wind
Enthusiasts of winter sports can enjoy downhill skiing and snowboarding in Moscow and the Moscow Region
Expert Reports
Peru: the near future of tourism is in question
Access to the territory of the ancient city of the Inca civilization Machu Picchu was closed indefinitely by the authorities