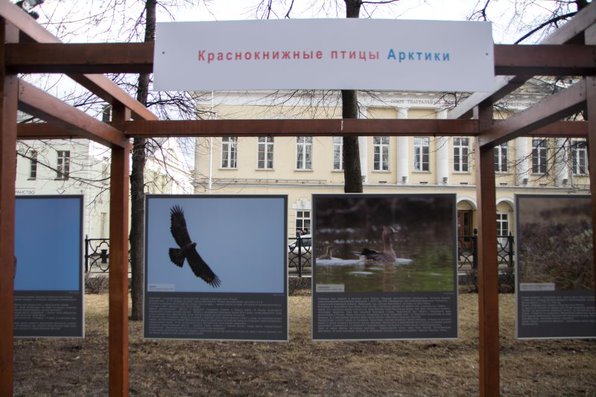 On April 3, 2021, Moscow hosted the grand opening of a photo exhibition of birds of the Red Book of the Arctic. The exposition can be found at the Boulevard of Ecological Art (Strastnoy Boulevard square, at house level 10).

The concept of the exposition was developed by the Ministry of Natural Resources of Russia, Roszapovedtsentr and the Ecological Chamber of Russia with the support of PJSC MMC Norilsk Nickel. It is dedicated to the Arctic.

The opening ceremony was attended by Igor Ivachev, director of the State Oceanographic Institute named after N.N. Zubov, representatives of Roshydromet (the Russian Federal Service for Hydrometeorology and Environmental Monitoring) of the Russian Federal Agency for Tourism and others.

Opening the exhibition, the UN Goodwill Ambassador for the Arctic and Antarctic, Deputy of the State Duma of the Russian Federation Vyacheslav Fetisov said that it is essential to conduct educational work. He also expressed hope that the Arctic topic will be envisaged in other cultural and educational projects.

State Secretary of the Ecological Chamber of Russia Vadim Petrov noted: «Usually, when it comes to the fauna of the Arctic, birds are not the first to be mentioned. And yet it is the birds that give the white silence of this region a special charm. The amazing ringing song of the polar sparrow personifies the arrival of real spring in the Arctic. Many representatives of the feathered kingdom of the Arctic are quite rare, require protection and therefore they are listed in the Red Book. Bird populations can also be considered a good indicator of background changes in Arctic marine ecosystems.»

An immersive sound performance "University of Birds" was organized for the participants of the event.

In addition, this May Russia will take over the chairmanship of the Arctic Council.

The preservation of the Arctic flora will be one of the central topics of the Russian agenda. The concept of the "green" agenda for the chairmanship is formed by the Ministry of Natural Resources and Environment of the Russian Federation.

«During Russia's chairmanship of the Arctic Council, we will continue projects to preserve the biodiversity of the Arctic region. I'd like to see fewer and fewer pages in the Red Book of the Arctic. So that many generations of people could enjoy the unique nature of the Arctic life,» said Ivan Kushch, Director of the Department for International Cooperation and Climate Change at the Russian Ministry of Natural Resources, at the opening of the photo exhibition.

The artistic region is rich in unusual nature and wildlife. According to scientists, the number of birds in the Arctic is up to 50% of the world's coastal birds, from 150 to  290 species.

Victoria Quiri
# Russia
More
04-15-2021
Kenya tourism suffers heavy blow as US retains highest travel advisory
Kenya's tourism is expected to decline following the US administration's decision to retain the highest travel advisory on the East African country
04-15-2021
Norilsk Nickel develops ecotourism at the Taymyr Peninsula
A new tourist complex "Zatundra" will be created at the Taymyr Peninsula
04-15-2021
China's Yichang invites global tourists
Yichang, a world famous hydropower city and home to a number of ancient Chinese celebrities, made a stunning appearance in front of the world
04-14-2021
Spring festival of artisans "Ivan-da-Marya" kick started in Yekaterinburg
The Ivan-da-Marya festival has opened in Yekaterinburg today
04-14-2021
About 800 seal pups were born in the south of Primorye
A total of 815 pups were counted with the help of a drone
04-14-2021
‘Culture Cities of East Asia 2021’ showcases the charm of Dunhuang
Over 20 activities highlighting a major historic and cultural landmark on the ancient Silk Road were unveiled at the opening ceremony of Culture Cities of East Asia 2021 on April 9 in Dunhuang, northwest China's Gansu Province
Exclusive
Muskox as an object of ecotourism
What can interest an ecotourist? Exceptional nature - of course, vastness - definitely, unusual animals - surely. What if we tell you about the places where you can have it all at the same time.
Expert Reports
Going to visit Belarus
The road connection between Russia and Belarus is expected to start by the summer