The Caucasus Mountains and the Egyptian pyramids equals in age 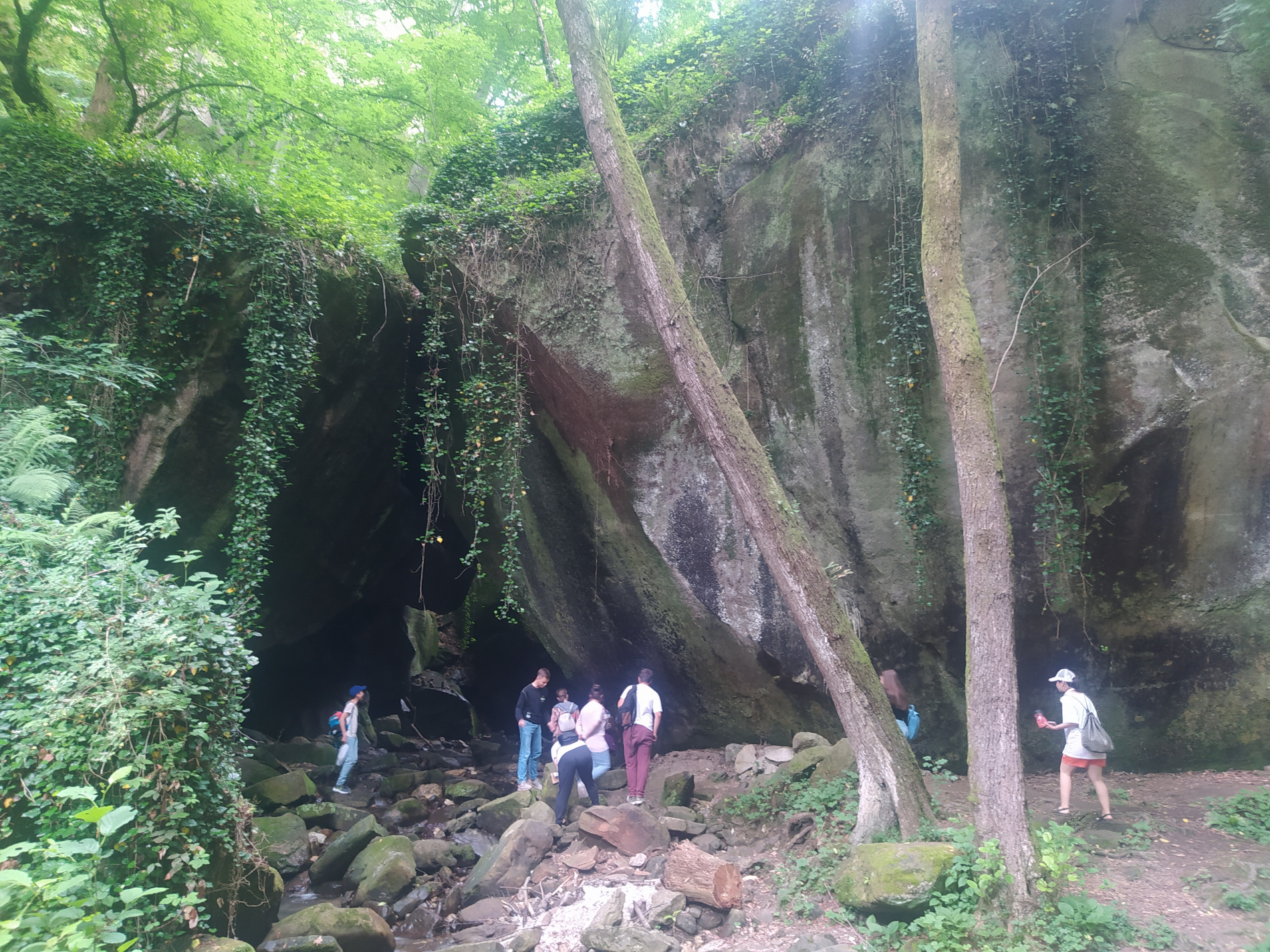 In the Year of Ecology, the Volkonsky Dolmen tourism attraction was reconstructed according to eco-standards. This is the only one-piece monolith dolmen preserved in the world that was carved in the sandstone. It is located in the Lazarevsky District, behind the Katkova Shchel (crevice), in the village of Volkonka that is just a half an hour’s drive from the centre of Sochi. The tourist site was chosen as a main pilot project for reconstruction upon the instructions from Dmitry Chernyshenko, Deputy Prime Minister of the Russian Federation.

By the beginning of the vacation season, much work was carried out here, which allows the Volkonsky Dolmen to be visited all year round. About 10 mn roubles have already been invested by private-state partnership in the reconstruction of the Volkonsky Dolmen. At the entrance to the Volkonsky Gorge, a backlit stele was installed and now, the tourism attraction can be seen from the highway. Unfortunately, it is not yet possible to provide the Dolmen with an interactive panel because of vandals.

A new staircase made of chestnut wood leads up to the Volkonsky Dolmen, this wood is strong, does not rot and requires no processing. Dead wood is used for the staircase as it is forbidden to sell a healthy chestnut wood. At the entrance to the gorge, there is a wooden booth where a ticket office and a security point are located. Throughout the route, there are benches and garbage bins, as well as information boards and a toilet. A new ecological concept of the recreational route was presented at the Sochi National Park.

- In 2022, a year of the preservation of historical and cultural heritage in Russia, we pay special attention to the modernization of tourism attraction sites. The Volkonsky Dolmen and the Godlik Gorge, a favorite place for Sochi residents and guests, were chosen as pilot projects. We have completed the landscaping of the area using natural materials. This season, tourists can see a renovated eco-friendly recreational site located close to the seaside, the environmental organization says.

The main attractions of the Volkonsky Gorge where the Godlik River runs are a monolith dolmen dating back to the 3rd-2nd century B.C., a mineral water spring, and rocks called Two Brothers. The Volkonsky Dolmen is a rare type of dolmen culture structure. There were only five of them in the Western Caucasus, but only one has survived to date, it is located at the Sochi National Park.

The Volkonsky Dolmen is a place of attraction for tourists. They say, the Dolmen are of the same age as the Egyptian Pyramids. Most of the dolmens are located in the Lazarevsky District of Sochi. Particularly unique dolmens are included in the so-called Sochi National Park’s megalithic ‘ring’. Megaliths are structures made of huge stones, installed in a certain order. They are found in the Caucasus, Western Europe, Australia, and North America. In total, there are nine thousand megaliths in the world, a third of them are located in Russia. There are 350 megalithic structures at the Sochi National Park. Nikolay Markov, a leading specialist of the Sochi National Park on Environmental Education, told about the uniqueness of dolmens.

- Why is the Volkonsky Dolmen unique?

- Dolmens were made by installing four slabs and a fifth one covering them, said Nikolai Markov, a lead specialist in the environmental education at the Sochi National Park. Trough-shaped dolmens were cut using large boulders. And the chamber inside a monolith dolmen was carved through a hole (its dimensions were 1.9 by 1.6 metres). Imagine how difficult it was to cut it using a bronze chisel! This was extremely hard work! That is why there were few such dolmens. According to scientists, there were only five of them in the Krasnodar Territory.

- This is a giant sandstone rock, 17 metres deep, eight metres wide and seven metres high. The chamber is also big enough. The vast majority of dolmens, like the Volkonsky one, are made of sandstone. Also, there are dolmens made from granitoid rocks and limestone stones. The Volkonsky Dolmen was made, as they say, at the place of power. I myself go to the dolmens to get ‘charged’. And this makes sense. They are usually made on geological fault lines. The Volkonsky Gorge is just the place of a giant geological fault, there was a powerful earthquake resulted in the fall of rocks. That is, this tourist attraction was created by a natural phenomenon. Hundreds, thousands of years passed, but this dolmen is still standing here. Imagine the energy of this place! Not surprisingly, there are a lot of hypotheses.

- What is its purpose?

- First of all, this is a tomb where headmen of tribes and priests were buried (similar to the Egyptian pyramids where the pharaohs were buried). Second, it was a holy place. Considering that it was made about 3.5 thousand years ago, it represents the belief in the spirits of ancestors and the worship of the Sun. 95 percent of the dolmens are turned to the Sun. At the top, there is a 60-cm hollow and a platform, I think they were used for rituals, for example, a sacrifice to the gods. It was a place where the tribal community got together. The weight of each slab is tens of tonnes, and the thinnest ones weigh 15 to 25 tonnes. Near the Dolmen, there is a spring appeared as a result of a fault. You can’t drink its water, but you need to do ablution.

- This is the most accessible dolmen located in the city. Why is it so close to Sochi?

- I have already mentioned, this is a place of a gigantic geological fault. We do not know who lived here, but they were clearly an intellectual community. In Sochi, 38 percent of the dolmens are trough-shaped - carved in stone, which was easier, but one should have known this. When people got tired of carrying the slabs, they began to think and invent.

- What is the most original question you were asked by tourists about the Volkonsky Dolmen?

- Once, I met a serious and knowledgeable man at the top of the Dolmen. We started talking and he told me why he came here. As it turned out, he came to meditate. According to him, men of wisdom used to gather in this place and discuss the creation of the world, after which the oldest one disintegrated into molecules and turned into stone.

- Near the Volkonsky Dolmen there is a natural attraction called Two Brothers. What can you tell about it?

- When there was a giant geological fault, two steep rocks were called ‘Brothers’. There are many legends about this place of power. Two brothers fell in love with one girl whose name was Godlick. They became enemies. The Gods turned them into rocks. The girl, mourning them, turned into a River. Some guides went further and told that the Two Brothers needed help, because it was hard for them to stay in place, and the tourists began putting sticks under the rocks, which added work to the employees of the Sochi National Park. This garbage is harmful to the environment, just like the ribbons tied around the trees while ‘making a wish’.

Alexey Kopaygorodsky, Mayor of Sochi, visited the official opening of the Volkonsky Gorge route when he made a working tour of the Lazarevsky District.

- Particularly picturesque areas of the Sochi National Park are being improved in the Year of Ecology, said the mayor of the resort city. Our nature is becoming closer and more accessible to people, while maintaining its beauty and diversity. Renovated ecological sites and tourist destinations appear not only in the federal specially protected natural areas, but also in the city. We keep on opening new eco-zones and squares. While constructing and reconstructing them, we comply with the environmental requirements and plant new trees, use energy-saving power sources, and put the pipelines underground. This allows us to conserve and improve the environment. Half of the activities planned for the Year of Ecology have already been completed, and I thank everyone who is committed to this really important goal, which can give impetus to making our city better and ‘greener’, teach us to love and protect the nature of Sochi, and create a reserve for future generations.

After the Volkonsky Dolmen, the next popular tourist sites to be reconstructed are the Agur Gorge and the Eagle Rocks.

The Sochi National Park was founded in 1983. It is located along the Black Sea coast in the Greater Sochi, in the northwest of the Greater Caucasus. This is the first national park in Russia.

The length of the Mzymta River, the largest in the Sochi National Park, is 89 kilometres. The native flora includes more than 2.2 thousand species, and 30 percent of the native species of animals and plants are relict, more than 20 percent are listed in the Red Data Book (an endangered-species list), 20 percent are endemic. The Sochi National Park is divided into 16 forestries.

All the main Sochi’s sights and attractions are located at the Sochi National Park, both cultural and historical attractions and the natural landscape ones, including waterfalls, caves, grottoes, gorges, canyons, alpine lakes, and mineral springs.

The Park protects 116 monuments of historical and cultural heritage - dolmens, burial mounds, cave habitats and open-air ones, acangouras (ancient stone buildings, the origin of which causes controversy to this day), medieval temples, and fortresses. The famous Arboretum Park takes a special place among them, it is a wonderful example of landscape gardening art of the late 19th-early 20th centuries with a rich collection of trees from five continents.

Since 2009, at the Sochi National Park, or rather, at the Centre for the Restoration of the Leopards in the Caucasus, a unique programme has been under implementation to restore the population of the Persian leopards (Latin: Panthera pardus ciscaucasica) - also called the Caucasian leopard or Central Asian leopard - in the wild.