The best dish of May
News
Exclusive
Expert Reports
Blogs

The best dish of May 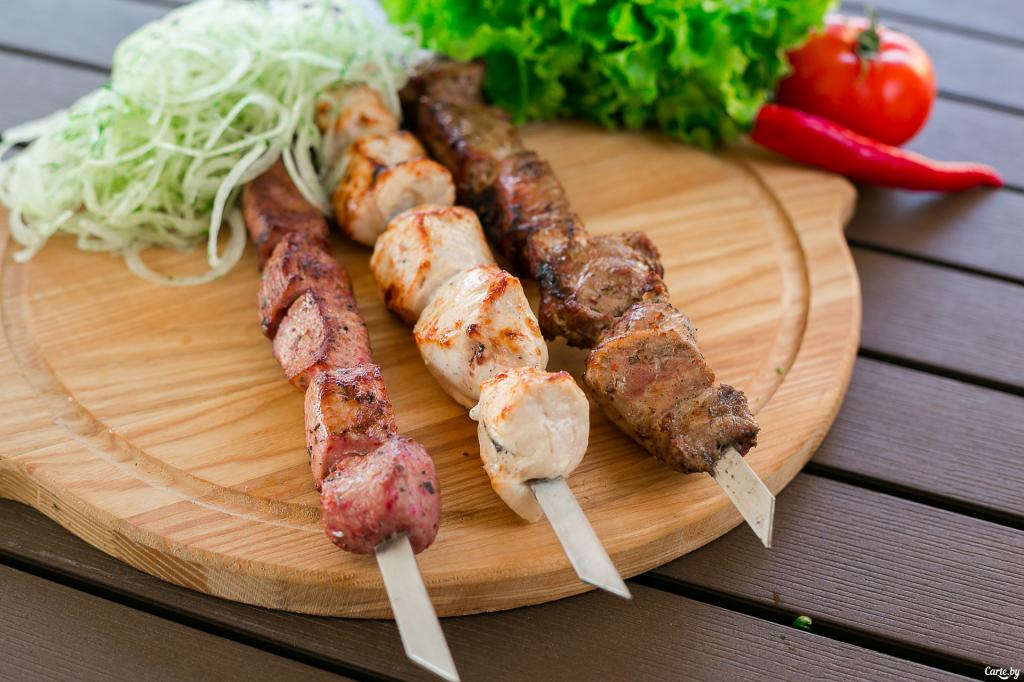 They say that there are myriad ways to marinade kebabs and only one way to prepare and roast it correctly. On the eve of the May holidays when many Russians open the shish kebab season, EcoTourism Expert figured out the subtleties of making shish kebab (Russian: ‘shashlyk’, a type of barbecue) and found out where in Russia you can taste the most delicious shish kebab, how much the simplest shish kebab set costs and how to cook shish kebab on your own not to get fined by a fire department.

The May holidays traditionally open the unofficial shish kebab - or barbecue - season in Russia; while earlier, in the days of the USSR, many Russians went out of town to plant potatoes and do gardening in May, now, they go to their ‘dachas’ (summer houses) to roast shish kebabs. However, you can roast shish kebabs by yourself, but people can also go to those Russian regions where meat roasted on fire is considered one of the most traditional dishes and therefore, they not only love to roast it, but also know how to prepare and roast it like nobody else does.

It should be noted that it is not possible to call any settlement the shish kebab capital of Russia. However, the majority of people choose the southern regions of Russia. So, for example, travel agencies even sell specialized tours under the motto “We’re flying to the homeland of shish kebab and Caucasian hospitality.”

In the Caucasus and next to it, several settlements claim the title of the ‘shish kebab capital’. One of them is Cherkessk, the capital of the Karachay-Cherkess Republic. In this city, back in 2009, a world record was set for the longest shish kebab - it was 120 metres long!

By the way, the word “shish kebab” is not of the Caucasian origin at all, and it came to the Russian language, in fact, quite by chance. It is from the Crimean Tatar word ‘shish’ (skewer), and ‘shish kebab’ means ‘meat roastered on a skewer’. By the way, shish kebab was known in Russia until the 18th century, but it was called ‘meat roasted on a skewer’.

At the same time, John Warren, famous TV personality presenting his show “Let’s Go, Let’s Eat!” called Chaltyr, an Armenian village ten kilometres away from Rostov-on-Don, the shish kebab capital of southern Russia. The Armenians themselves call shish kebabs ‘khorovats’. Khorovats is the most typical dish of the Armenian cuisine offered at restaurants, at family parties in Armenia, and it is popular among the Armenians living around the world.

In a word, you can eat shish kebabs both in the places mentioned above, and in your own summer house. But first, it must be said with regret that the so-called ‘shish kebab (or barbeque) index’, which shows the cost of the products that make up this dish, is growing every year.

Unfortunately, 2022 will be no exception. At the moment, the information on the rise in prices in Russia has yet to be obtained. However, a number of regions (for example, the Chelyabinsk Region) have already calculated that the ‘shish kebab index’ this year increased by 22 percent compared to a year ago. And a group of five to six people on the May holiday picnic can cost at least 6,479 roubles. This amount includes a basic food set, equipment, coal and the fire starter fluid.

What is this amount made up of? Let’s take the simplest skewers, their cost in the Region has increased by 57 percent, ten skewers cost an average of 488 roubles. The simplest prefabricated charcoal grill, however, practically has the same price and costs 986 roubles (977 roubles last year). But charcoal in the Urals has almost doubled in price - up to 422 roubles per 2 kgs, and the fire starter fluid costs an average of 228 roubles per 0.5 litre.

Of course, the Chelyabinsk Region is not a representative region in terms of the all-Russian inflation, but it can be assumed that in Russia as a whole, arranging a shish kebab party or a barbecue and roasting meat have become 20-25 percent more expensive over the last year.

As it was mentioned earlier, there are really a great many marinade sauces for shish kebab. Although experts in tourism and restaurant business, interviewed by EcoTourism Expert, still prefer their own recipes.

For example, Sergey Mironov, Vice-President of the Federation of Restaurateurs and Hoteliers of Russia, prefers a marinade made from onion juice and tomatoes.

“Never use chopped onion, use the onion run through the vegetable grinder. Canned tomato juice can be used or squashed tomatoes. A homogeneous mass is made from all this, olive oil is added, as well as half a lemon, salt, pepper, and spices to taste,” he shared in an exclusive comment for EcoTourism Expert.

In turn, an expert in tourism Sergei Pozdnyakov prefers to use kefir (cultured yoghurt) to make a marinade sauce.

“I use kefir and add fresh herbs, most often coriander. Meat is kept in such a marinade sauce for about 2-3 hours, but it is important to use proper meat. Usually, everyone takes a pork neck, and I take a picnic shoulder, it turns out, in my opinion, both cheaper and tastier,” the expert believes.

And most importantly - use no vinegar!

You can also roast shish kebabs in nature. But in this case, the safe distance to inflammable objects must be even greater. Firstly, the area around the fire or charcoal grill within a radius of 10 metres must be cleared of a dry grass, dead standing trees and fallen deadwood, as well as the perimetre must be surrounded by a fireguard 0.4 metres wide and the soil must be cleared down to the mineral layer. There should be no buildings, haystacks and other objects within 50 metres from the fire, it should be at least 30 metres to the nearest deciduous tree, and at least 100 metres to a coniferous tree.

And if all these rules are observed - have a nice meal and eat hearty!