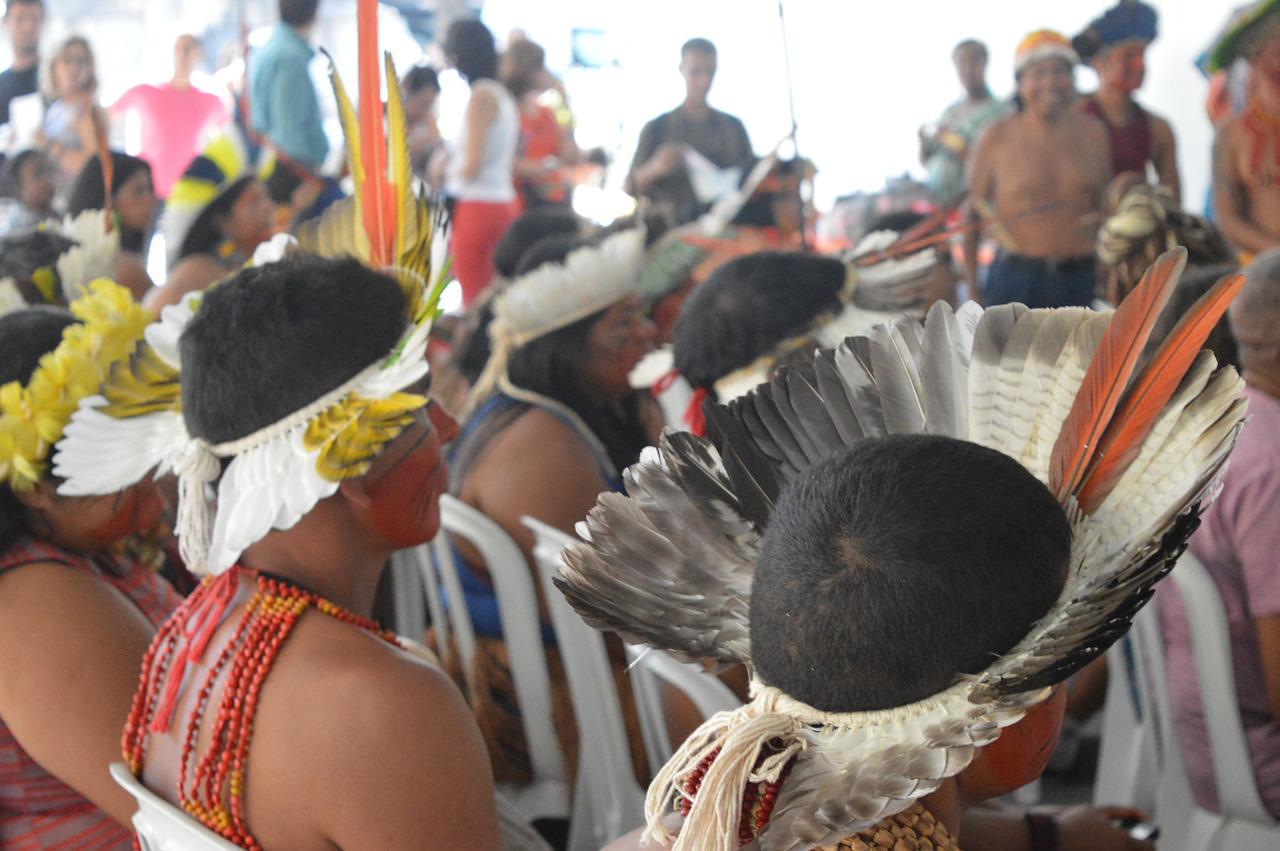 On August 9, the International Day of the World’s Indigenous Peoples is celebrated under the auspices of the UN.

There are over 200 million people belonging to indigenous peoples and ethnic groups on our planet.

In Russia, about 50 ethnic groups are classified as indigenous minorities of the North (IMN). More than half of them live in the Arctic zone of Russia, including two thirds living outside urban settlements.

That is why it is important to maintain a balance between the interests of indigenous peoples inhabiting their ancestral lands and the industrial companies operating in these regions.

INITIATOR OF THE FPIC

For the first time in the history of the Russian mining industry, the Norilsk Nickel company launched the so-called Free, Prior and Informed Consent (FPIC) procedure in 2021 and invited the indigenous residents of the Taimyr Peninsula to choose the way of relocating the villagers of Tukhard by themselves.

The FPIC procedure, successfully completed in 2022, has become an example of respect for the right of indigenous peoples to independently determine their political, social, economic, and cultural priorities.

In this regard, the FPIC procedure was meant to ensure the respect for the rights of the indigenous peoples of the Taimyr area.

“Norilsk Nickel has historically provided active support to indigenous communities, but now, the cooperation has reached new heights. Two years ago, we signed a five-year agreement with an amount of financing of 2 billion roubles; the agreement was based on the results of a dialogue with the local communities taking into account their needs and requests,” Zhukov said.

The initiatives that are in the FPIC roadmap include the construction of venison and fish processing workshops, the purchase of refrigeration units, the construction of an ethnic complex with fur processing workshops, subsidizing helicopter transportation, targeted training in professions that are in demand at Norilsk Nickel, as well as the publication of textbooks in indigenous languages, and many other special and full-scale initiatives.

Although the FPIC procedure is not directly included in the legislation of the Russian Federation, Norilsk Nickel, the world’s largest producer of palladium and high-quality nickel, as well as a major producer of platinum and copper, voluntarily recognizes international standards and the UN Declaration on the Rights of Indigenous Peoples.

There are 19 ethnic groups living in the Arctic zone. The support of the indigenous minorities of the North (IMN) is stipulated by the 10-year Development Strategy of Norilsk Nickel until 2030 that provides for the preservation of their traditional way of life, supporting their economic activity and culture, financing the measures to save the environment, as well as the construction of social facilities, the preservation of their ethnic languages, and the development of tourism.

Nowadays, Norilsk Nickel is the only miner in Russia whose development strategy specially ensures the support of the indigenous minorities of the North.

In June 2022, Norilsk Nickel held preliminary consultations with the representatives of indigenous peoples in the Murmansk Region’s villages of Lovozero and Krasnoshchelye to discuss the prospects for the development of the Kolmozersky lithium deposit, the largest one in Russia.

The Saami, Nenets and Komi, as well as the representatives of reindeer herding farms, authorities, ROSATOM State Corporation and independent experts in the field of indigenous peoples’ rights.

The main purpose of the meeting was to have a two-way conversation between the company and indigenous peoples, to inform the representatives of local communities about the upcoming project, to listen and record all the suggestions and comments of indigenous people’s organizations.

“It is important for the company to take into account and minimize all possible negative impacts for the indigenous peoples of the region. Norilsk Nickel has extensive experience in supporting reindeer husbandry in the Taimyr, and this knowledge and competence will be of help in the Murmansk Region,” commented Andrey Grachyov, Vice President of Norilsk Nickel.

The reserves of minerals commercially mined are mainly located in places of compact residence and economic activity of the indigenous minorities of the North.

For example, diamonds are mined in the Anabar, Bulun, Zhigan and Mirny districts of Yakutia. A few years ago, diamonds were discovered in the Nyurba District. Coal is mined in Southern Yakutia, gold - in Aldan and the Oymyakon area, and tin is mined in Ust-Yan. Indigenous small-numbered peoples of the North live in all these areas.

In Russia, about 50,000 people belong to the indigenous minorities of the North, Siberia and the Far East. One of the priority tasks of the Russian mining enterprises is to preserve their population, traditions and ancestral territories.

The ALROSA company developing diamond deposits in Yakutia, pays key attention to social responsibility. The company sets itself a large-scale task - to develop the regions of its presence so that local residents are always provided with jobs and decent wages.

ALROSA finances the children’s recreation in children’s health camps, renders assistance to poor people, war and home front veterans, and to the Association of the Blind.

In addition to charitable assistance, ALROSA helps in providing jobs to the representatives of indigenous peoples, and they make about 11.6% of the company’s employees.

The Almazy Anabara company - within the framework of the cooperation agreement with the Anabara National Ulus(District) - pays attention to the employment of the indigenous people at the enterprise.

The Nizhne-Lenskoye company is engaged in the diamond production in four uluses - the Anabar, Olenek, Zhigan and Arctic Bulun ones; the company signed agreements on socio-economic cooperation with these uluses.

Millions of dollars are donated by the British mining group Anglo American and its subsidiary De Beers to support the southern African population.

De Beers and National Geographic have created a strategic partnership aimed at protecting endangered species in Africa, ensuring water and food security for over a million people and creating livelihood opportunities for 10,000 indigenous people.

The Australian mining company Rio Tinto, which owns enterprises in 36 countries, has developed its own standard for the relationships and social life of the locals.

At the Oyu Tolgoi gold and copper mine in Mongolia, Rio Tinto took the protection of the tangible and intangible cultural heritage of the indigenous community upon the company.

Rio Tinto also do their best to restore trust and relationships with the Western Australian aborigines after the destruction of the ancient caves at the Juukan Gorge in the Pilbara region.

The Swiss company GLENCORE, one of the world’s largest suppliers of raw materials, also actively cooperates with indigenous communities.

The company’s activities are carried out in compliance with the recommendations of the International Council on Mining and Metals (ICMM) on indigenous peoples and the mining industry, which requires that projects located on lands traditionally owned by indigenous peoples or are in their traditional use be implemented taking into account the rights and interests of ethnic groups.

In turn, the Australian BHP, one of the largest mining companies, set up a Global Indigenous Peoples Working Group in 2016 consisting of the representatives of all international assets of the company, including Minerals Australia and Minerals America.

Lucara Diamond that is expanding its Karowe diamond mine in Botswana successfully works with 19 different local communities, holding regular meetings with representatives of each of them to better understand their specific needs. The company also collaborates with indigenous peoples in Alaska.

Natural diamond miners start working with local authorities even before the mine is opened. The drawn-up plans pursue the goals of preserving biodiversity and ensuring the safety of adjacent lands, as well as preserving the culture and traditions of the indigenous people, improving their economic status and educational level, providing medical care and social benefits, as well as paying compensation.

For example, Debswana, a leading diamond producer in Botswana, runs primary schools in the mining communities, and De Beers pays scholarships to girls and women studying the exact sciences.

Today, industrial giant companies are increasingly focused on trust between the local community and business, on the “green economy”, sustainable regional development, in particular, on strengthening the role of the local population in business development.

THERE ARE STILL PROBLEMS

Most of the assets of major industrial companies are located close to the traditional indigenous habitats. That is why the active industrial development of natural resources in different parts of the world cannot but affect the life style of indigenous minorities in these areas.

While opening new mines, most mining companies have conflicts with indigenous people as it was necessary to relocate them. Despite initiatives to involve indigenous people in business, they are quite uncompromising about changing the boundaries of the lands where they live.

As recently reported, the indigenous people of the Northern Territory of Australia demanded compensation from the local authorities for the damage caused to their sacred trees by the Glencore’s zinc and lead mine McArthur River.

According to the Roving Reporters agency, in the southern African countries, indigenous peoples are under higher pressure to agree to the miners’ environmentally hazardous activities.