Lebanese cedar: The symbol of the country calls for help 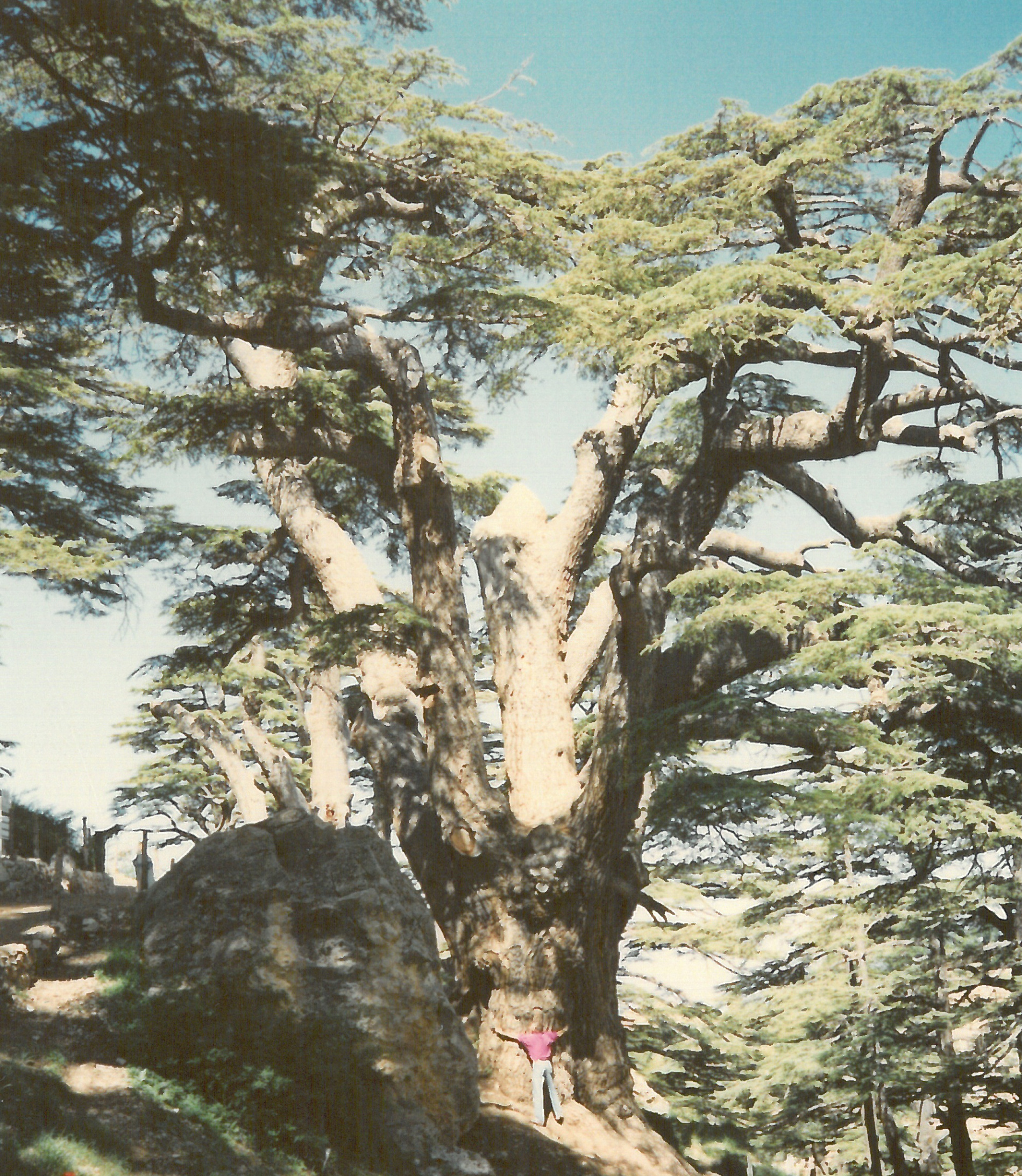 This majestic tree glorified in the Bible and even earlier, in the Mesopotamian epic of Gilgamesh (4,500 years ago; that is, the cedars are the oldest trees mentioned in the history of mankind), became one of the first loss of nature caused by civilization. In 1895, the Damascus-Beirut railway line began its operation in the then Ottoman Empire. There were no coal deposits in the empire, so, the coal imported from abroad was rather expensive. The authorities found a simple way out to reduce the transportation costs - to heat the loco furnaces with good-quality resinous cedar logs. Fortunately, there were a lot of cedars in the neighbouring mountains. Soon, steam locomotives running in Lebanon, Syria and Palestine “ate” most of the cedar forests.

This is the name of the most amazing cedars that have survived to date. They grow in northern Lebanon on the Mount Makmel’s slopes in the Bcharré region and are a UNESCO World Heritage Site. It is said that two trees survived here are 3,000 years old, there are also 10 thousand-year-old cedars, and 363 trees are at least 100 years old.

During their evolution, the Lebanese cedars have adapted to natural dangers and become able to cope with them. Strong winds blowing in the Lebanon mountains (the cedars grow from a height of 1,400 to 1,500 metres) were among the major problems. To reduce the impact of the wind, the cedar branches grow in a horizontal plane, as if on different levels, with empty space between them, and, thus, the wind pressure on the tree is less. However, the mighty trees were attractive not only because of their beauty. The ancient kings who wanted their palaces to look beautiful needed cedar tree logs, too. Cedar wood was also valued by shipbuilders. And the furniture made of cedar wood was quite good. The ancient Egyptians used Lebanese cedar tree resin for mummification, and Jesus Christ, according to some texts, was crucified on a cedar wood cross. Thus, the cedar forests that grew in the Lebanese mountains lower and were within reach in the ancient times became sparse, so in the year 118, the Emperor Hadrianus issued a decree restricting cedar-felling and he used the traditional way to do this - he declared some groves “holy”, i.e., the place where the Gods lived.

It cannot be said that the fate of the Lebanese cedars worried the Roman emperor only. From time to time, some local representatives were worried about them, for example, the patriarch of the Maronites (local Christians) in the 19th century. But, although the cedar became a symbol of the struggle for independence, and after gaining independence it appeared on the national flag, due attention was not paid to the fate of the national symbol. The Lebanese government expressed grave concerns when cedars made just under one percent of all forests. To be fair, it should be noted that from 1975 to 1990, there was a civil war in the country, and there was no time for taking care of ecology.

Meanwhile, in addition to traditional misfortunes, such as cedar-felling and using cedar buds to produce popular remedies for skin diseases (Macérat de cèdre du Liban, €20 for 30 ml), the trees began to die from an unknown disease. The cedar grove near the village of Tannourine, one of the two largest groves and the “Cèdres de Dieu” were hit most. The leaves of 80 percent of the trees in the Tannourine Grove were affected by something. After the end of the civil war, a nature reserve was finally created here in 1999, and its experts discovered the enemy. The insect was even named after this cedar grove Cephalcia tannourinensis, it was one of more than 100 species of wood wasps, called the “web-spinning sawflies” in Russia. This insect reproduces in the following way: a female lays eggs in the cedar buds, and the hatched larvae eat them, even the lush cedar needles. Having done enough harm to the tree, the larvae fall from the branches and get below ground to mature there and appear in the form of new Cephalcia tannourinensis. “If you just dig the earth near the cedar trunk you will see green larvae - the causes of misfortune - everywhere,” wrote the Lebanese press. The Reserve took the help of the Food and Agriculture Organization of the United Nations (FAO), as well as the French specialists, to develop a special bio- (not chemical, God forbid!) insecticide capable of killing the insect. Five years later, it was announced that the situation was under control. But until now, in Tannourine, one can see dry dead trees, and, according to official statistics, 170 trees died in this grove in 2017. But where did this unexpected winged enemy come from? The wood wasps did not come from Mars, did they?

Since the 1990s, Lebanon has seen an increase in temperature, a decrease in rain and snow. Experts say that due to the changing climate, the insects, which have inhabited this region since ancient times, became active. In cooler and more humid conditions, the larvae remained “sleeping” in the ground for three to four years. But now, when the average temperature has risen by several degrees, the insects’ life cycle has accelerated, and their number has increased dramatically. The problem of warming in the Lebanon’s region is especially acute, according to Wolfgang Cramer, member of the scientific council of the Mediterranean Experts on Climate and Environmental Change (scientifique membre du réseau d’experts méditerranéens sur l’environnement et le changement climatique, MedECC). Wolfgang Cramer’s colleagues believe that the Mediterranean is warming faster than other parts of the world; according to their estimations, by 25% faster. So, the problem is not with the cedars only. Some calculations show that by 2100, the climate change could lead to an acute shortage of water, which will challenge the existence of the people in the region.

In this situation, the Lebanese tried to establish an inverse relationship between the ongoing processes. The forests, including the cedar ones, are dying due to the changing climate, and one of the reasons of the changing climate is a decrease in the forest area. This means that it is necessary to do our best to increase the forest area again. It is also a shame if the country’s symbol disappears. Indeed, even the participants in the active anti-government demonstrations in October 2019 called their manifestations “Le cèdre d’octobre” (October cedar) ones. Therefore, in 2008, a group of enthusiasts set up the “Jouzour Loubnan” (Lebanese Roots) movement. Its members gathered on weekends to plant tree seedlings, primarily cedars, in the mountainous areas. At first, they did not succeed in planting due to the lack of necessary information and skills, but gradually things went better. One of the founders of the movement, Magda Bou Dagher Kharrat, who is its leader today, says on the Jouzour Loubnan website that the movement enthusiasts have already planted 350,000 new trees. It took 5 years (!) for the government to join the public initiative. At the end of 2012, the Lebanese Ministry of Agriculture announced an ambitious programme to plant 40 mn trees on 70,000 hectares. The programme should be completed by 2030. The government sources say that over 3 mn trees have already been planted, including cedars. Such figures were achieved by involving the military personnel to planting the trees. According to other sources, 600,000 of the trees planted have taken root.

“We have no right to give up hope”

This is what the Lebanese say. Saving the cedars has become a real goal for many young people. Now, the country has four “enclaves” where the legendary trees have been preserved, such as the “Cèdres de Dieu” in the Bcharré region, the grove in Tannourine, the grove in an inaccessible area on the slope of Mount Barouk in the Chouf region, and the grove in Jaj near the historic port city of Byblos. It was from here that Hiram, the Phoenician King of Tyre, once sent cedar tree logs to his friend King Solomon of Israel to build his palace (The Old Testament, the Second Book of Samuel). Lebanon was always protected by the magic of the cedar trees. I don’t want to believe that this country will lose it.