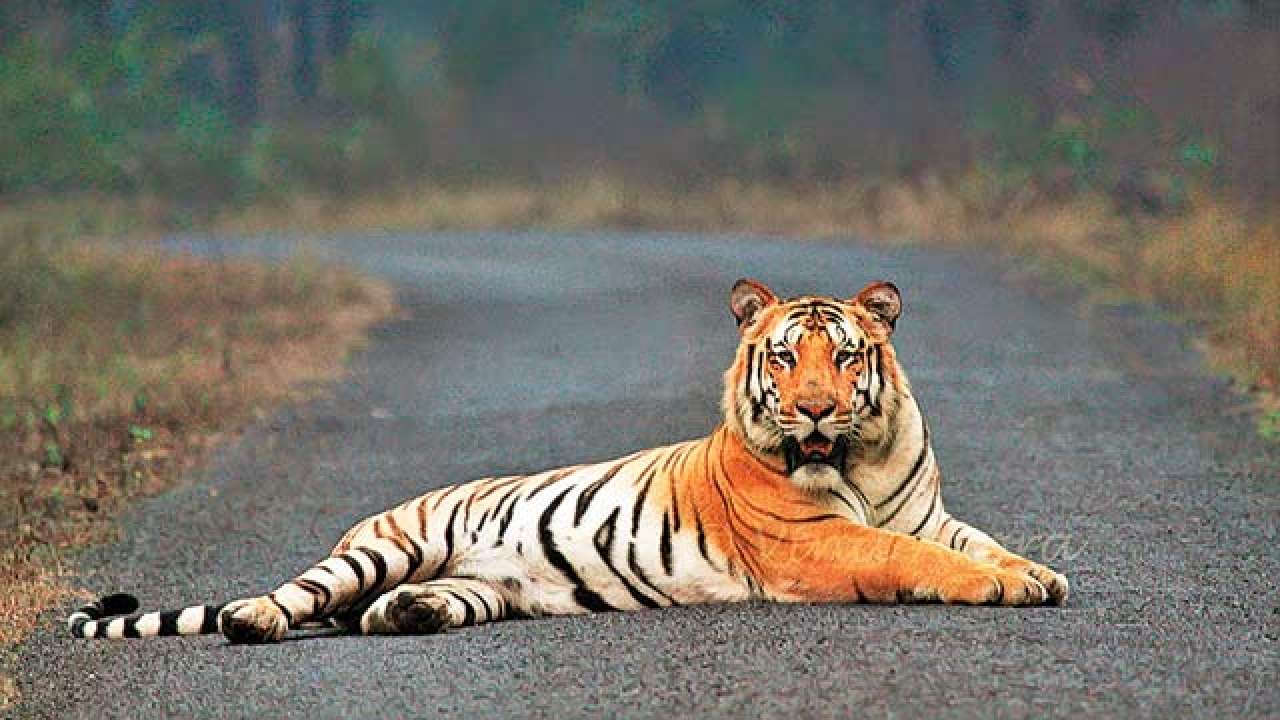 At the plenary discussion “The status of the global tiger recovery programme implementation from 2010 to 2022” held at the 2nd International Tiger Forum, the representatives of the Tiger Range Countries (TRCs) shared their experience in the conservation of this wild predator.

In a video message to the participants of the 2nd International Tiger Forum, President of the Russian Federation Vladimir Putin noted that the population of the Amur tigers in Russia had doubled in 12 years. “12 years ago, Russia’s Far Eastern taiga was home to no more than 390 adult Siberian tigers. Now, this figure, including cubs, has grown to around 750,” he said. The President stressed that this was the result of “systemic measures implemented by the state, but above all, the visible embodiment of the well-coordinated, hard work of the Russian scientists, enthusiasts and environmental organizations.”

According to the Russian President, the task of strengthening the international cooperation is of “special significance” and he noted the accomplishments of the colleagues from India, Nepal, Bhutan, and China, where numbers of this big wild cats are growing steadily.

Minister of Natural Resources and Environment of the Russian Federation Alexander Kozlov noted in his presentation that “13 countries are the tiger range countries where the last remaining tigers live in the wild. The future of this predator depends on all of us, on each of us.”

According to Alexander Kozlov, over the past 12 years, not only has the tiger population grown, but its habitat has also expanded. Whereas in the past the tigers could only be seen in the Primorye Territory and the Khabarovsk Territory, now they have also made their home in the Jewish Autonomous Region and the Amur Region. The tigers’ habitat has expanded to cover almost 186 sq. km.

Kozlov said that Russia and China were currently discussing the creation of the Land of the Big Cats transboundary reserve. Today, 25 tigers already live there.

Summing up the results of 12 years of activity aimed at the conservation of tigers, the measures taken in Russia were announced. In particular, in 2013, liability for crimes against tigers was introduced into the Criminal Code, and in 2019, the punishment for these crimes was toughened. A system has been created for the protection of tigers and their food supply on the basis of services protecting the wildlife in the regions of the habitat of the rare tigers. New specially protected natural areas have been set up and a programme has been introduced to compensate farmers who suffered losses from the tigers. There is a system of the rehabilitation and reintroduction of tigers and a large-scale educational work is underway.

According to the Chairman of the Supervisory Board of the Amur Tiger Centre Konstantin Chuichenko, “today, we have reached a comfortable number of tigers.” He is of opinion that the excessive density of the tigers leads to an increase in conflict situations with humans. In this regard, the current task is to expand the range of the tigers and move closer to the historical borders. He is of opinion that for comfortable reproduction and existence of the tigers, it is important to think about the state of the taiga, the forest where tigers live, as well as about the hoofed animals the tigers prey on. More attention should be paid to the direct defenders of the tiger - the service of the Okhotnadzor (Wildlife Management Agency), which is currently well equipped.

Special attention is paid to minimizing risks for tigers when developing projects and programmes for the social and economic development of the Far East, which may affect lands having no a protected status, but included in the tigers’ range.

In the coming years, Russia also plans to work out a really effective mechanism for bringing to justice for cruelty to animals, in particular, to tigers that are in captivity in adverse conditions.

In turn, Ambassador Extraordinary and Plenipotentiary of the Embassy of the Democratic People’s Republic of Korea in the Russian Federation Hong Chol Sin noted that the DPRK had carried out work to significantly restore the tigers’ habitat and created a legal basis for the protection of this rare and endangered species of animals. The DPRK stands for the cooperation between border states for the sake of the tigers, primarily, for the cooperation with Russia and China.

Satya Prakash Yadav, Member Secretary, the National Tiger Conservation Authority (NTCA) of the Republic of India, a country where approximately 70% of the total tiger population lives, added that in order to preserve and increase the population of tigers, special attention must be paid to clean water sources. In India, the tiger population has doubled over the past 12 years.

“Since 2010, we have seen a stable growth: it is increasing by about 6% per year,” said Satya Prakash Yadav. To date, there are already 52 nature reserves in India that occupy 40% of the Indian range of the tigers. Significant results in increasing the number of the rare predators have been achieved, in particular, through monitoring using camera traps, accounting for tiger mortality, working with reserves’ personnel, using a special methodology for recording all conflict situations between tigers and humans, as well as special standards used to counter smuggling, and the strategies for buffer zones and corridors for animals.

It should be noted that almost every year, the Government of India allocates $60 mn to $80 mn for the implementation of these measures, of which the sum of $4.5 mn is for creating jobs.

At the same time, in India, conflict resolution is one of the most difficult challenges when it comes to managing the tiger population. The country has established special requirements and protocols for the situations when tigers approach areas of human habitation. There is also a warning system in place and special groups that go to the place of conflict situations.

Work is underway in close cooperation with India to protect and increase the tiger population in Nepal, a country that is one of the leaders in the growth of the population of these rare predators. Ram Chandra Kandel, Director General of the Department of National Parks and Wildlife Conservation, Ministry of Forests and Environment of the the Federal Democratic Republic of Nepal, said that over the past 12 years, they had managed to double the tiger population and also surpass these figures. “Today we have over 300 tigers,” Kandel said. “We have three main protected areas in the country where tigers live. They make up 23% of the country’s territory,” he said.

The growth of the tiger population in Nepal was made possible, among other things, by countering the illegal trade in tigers thanks to the efforts taken at the highest political level and by protecting the boundaries of national parks. Much attention was also paid to the work aimed at reducing conflict situations between humans and tigers.

According to Khin Maung Yi, Minister of Natural Resources and Environmental Conservation of Republic of the Union of Myanmar, who made a presentation at the Forum, the government estimates show there are 36 tigers in Myanmar and they inhabit 7% of the country’s territory. He added that Myanmar had 58 protected areas covering almost half of the state’s area. “Myanmar has developed a national tiger protection programme aimed at increasing the tiger population,” Khin Maung Yi said. He noted that the full implementation of the national plan for the tiger conservation until 2028 required about $10 mn, and according to the minister, currently, the country has about half.

The situation with the tiger population in Thailand, Cambodia and Laos remains difficult. In order to restore its population, the development and implementation of the tiger reintroduction programmes is required.

In Thailand, the reasons for this are illegal trapping of animals and illegal trade in their parts, as well as an insufficient food in a number of protected areas. Currently, there are 148-189 tigers.

In Laos, tigers have completely disappeared over the past 12 years. For the implementation of the tiger reintroduction programme, it is planned to use those predators that are kept in captivity. 70% of forest areas have already been allocated to get a new tiger population in Laos. Active work is also planned to educate the population, reduce the scope of hunting for rare animals, and the legislation in the environmental protection has been toughened.

In Cambodia, like in Laos, the tigers are considered extinct. Currently, two dedicated protection zones of 10,000 square km can be used for the tiger reintroduction in the country. For these purposes, it is planned to work closely with the neighbouring tiger range countries, NGOs and international environmental organizations, as well as to cooperate with local communities and improve the monitoring quality. Setting up a special fund to finance tiger conservation projects is being considered, as well as the creation of transboundary corridors for animals.

A slight increase in the tiger population was noted in Bangladesh, there were 114 tigers as of 2018. Based on estimates of the available food supply, up to 200 tigers can currently live in the forests of Bangladesh, according to experts.

According to Amir Hossein Chowdhury, the representative of the Ministry of Environment, Forests and Climate Change of the People’s Republic of Bangladesh, 18 areas have been designated as specially protected areas in the country. “From 2020, cutting down forests has been reduced in these areas, and the area of ​​land has been reduced where hunting is allowed,” he said.

In Vietnam there are about 30 tigers today in 7 protected areas. Pham Van Dien, Deputy Director General of Administration of Forestry, Ministry of Agriculture and Rural Development of the Socialist Republic of Vietnam, said the country had implemented a national tiger protection programme and poaching was criminalized. He emphasized the importance of joining efforts of the tiger range countries for the conservation of the population of these wild animals.

Kazakhstan also intends to reintroduce tigers. According to Aliya Shalabekova, Vice Minister of Ecology, Geology and Natural Resources of the Republic of Kazakhstan, taking into account that tigers were in Kazakhstan in the middle of the last century, the decision was taken to recover the tiger population in the country in the area earlier inhabited by tigers. A specially protected natural area of ​​415,000 hectares has been created next to Lake Balkhash. Today, about 45 species of mammals, 280 species of birds and 420 species of plants inhabit his area. Kazakhstan hopes that by 2025, a sufficient food base will be created in the country and the forests necessary for the reintroduction of the tigers will be restored. It is expected that the Amur tigers from the Primorye Territory will be the first striped predators to be brought to this area.