Beslan Miziev
Chairman of the Tourism Committee of the Republic of Ingushetia
01-18-2022
# Ingushetia,Russia

Ingushetia to become one of the most popular travel destinations

- Beslan Ilezovich, what is your opinion about the current state of the Ingushetia’s tourism infrastructure, the attraction of Ingushetia as a travel destination among the Russian and foreign tourists?

- Today, we can confidently say that Ingushetia is becoming one of the most popular tourism destinations. Undoubtedly, the increase in the tourist flow is an important achievement in the travel industry. As of September 1, 2021, despite the measures taken due to the coronavirus, it amounted to over 77,000 people, which is 1.7 times more than in the same period in 2020.

The volume of tourism and hospitality services is constantly growing. Over the past two years, more than 10 guest houses and mini-hotels have been opened in the region, the Chaika Water-and-Sports Complex has been reconstructed. Sports federations, popular tour operators and medical clinics have opened their offices and branches at the all-season Armkhi Resort.

As in many regions in our Republic, there still exist the factors hindering the tourism development. Some infrastructural problems are among them like the underdeveloped fast food restaurant network and the recreation sites in the area adjacent to the nature reserves, the lack of equipped ecological trails, equipped places for watching the animals, and other facilities necessary for the development of “green tourism”. 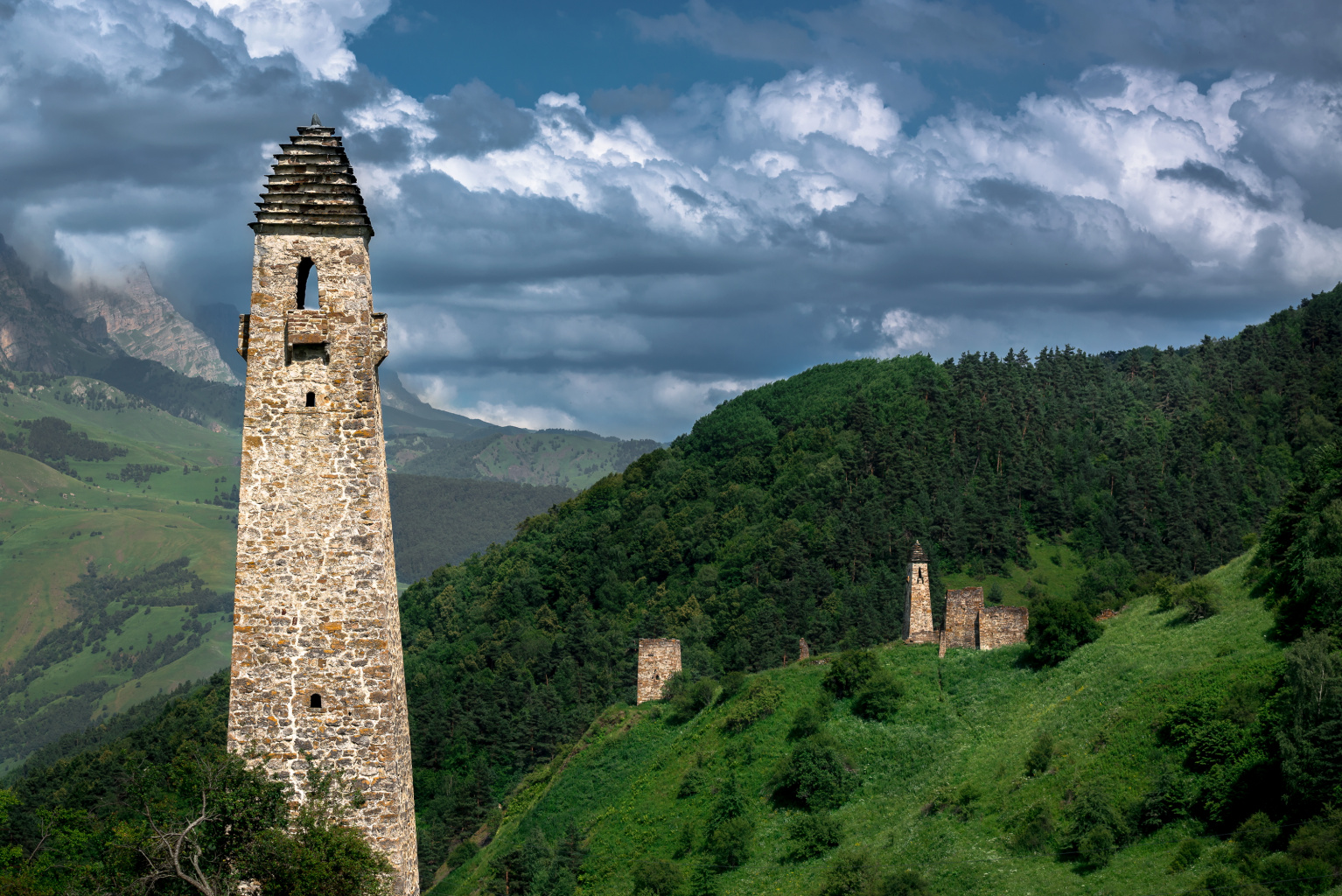 In addition, due to the special border regime in the Dzheyrakh District of the Republic, there are problems associated with restrictions and the need to obtain additional permits to visit the area.

We work actively to solve all these issues and constantly improve the infrastructure, adding convenient and high-quality services to our traditional hospitality.

The Tourist Information Centre of the Republic of Ingushetia has been opened where every traveller can receive any necessary information, and we use the “single window” approach in providing all the tourism services in the region.

- What are the most popular tourism attractions and routes?

- In the mountainous part of the Republic, there is the Dzheyrakh-Assinsky Historical and Architectural Museum-and-Reserve with its over 2,000 sites of cultural and historical heritage and over 20 tourist routes, including the medieval castles, ancient temples and sanctuaries. A great research activity is also carried out here, and ethnographers work in this area. 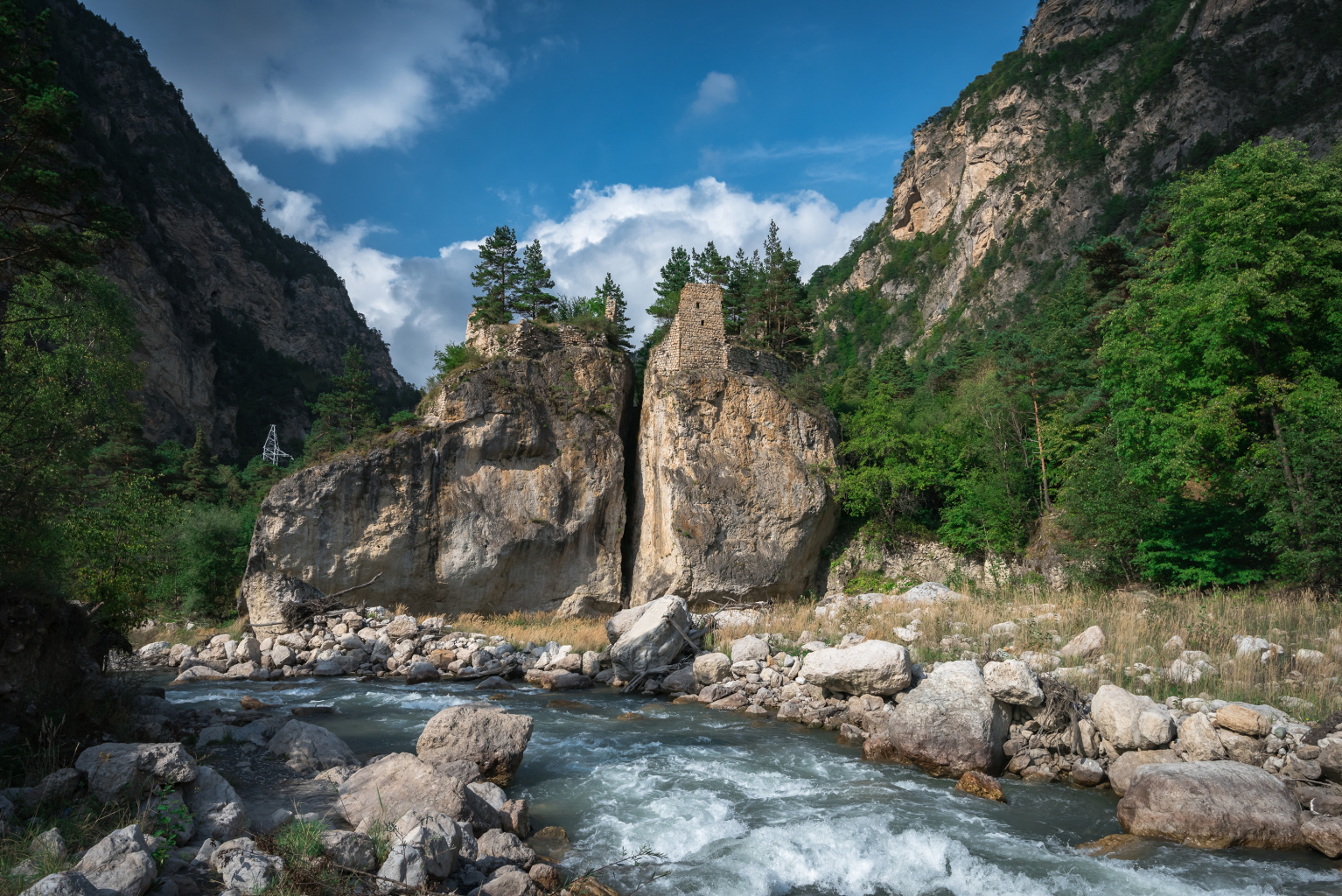 The all-season Armkhi Tourism and Recreation Complex built on the northern slope of the Main Caucasian Ridge, is also located within the boundaries of this Museum-and-Reserve. Sports, recreation and entertainment facilities are located here as close as possible. During the winter months, Armkhi is a ski resort with its world-class skiing pistes, good lighting, cable car, artificial snowmaking system, and a ski-training slope. And in the rest of the year, the Armkhi Complex is an ideal place for active recreation, educational and extreme tourism. It is convenient to get to the Resort both from Magas Airport and from Vladikavkaz along the newly built and reconstructed roads. 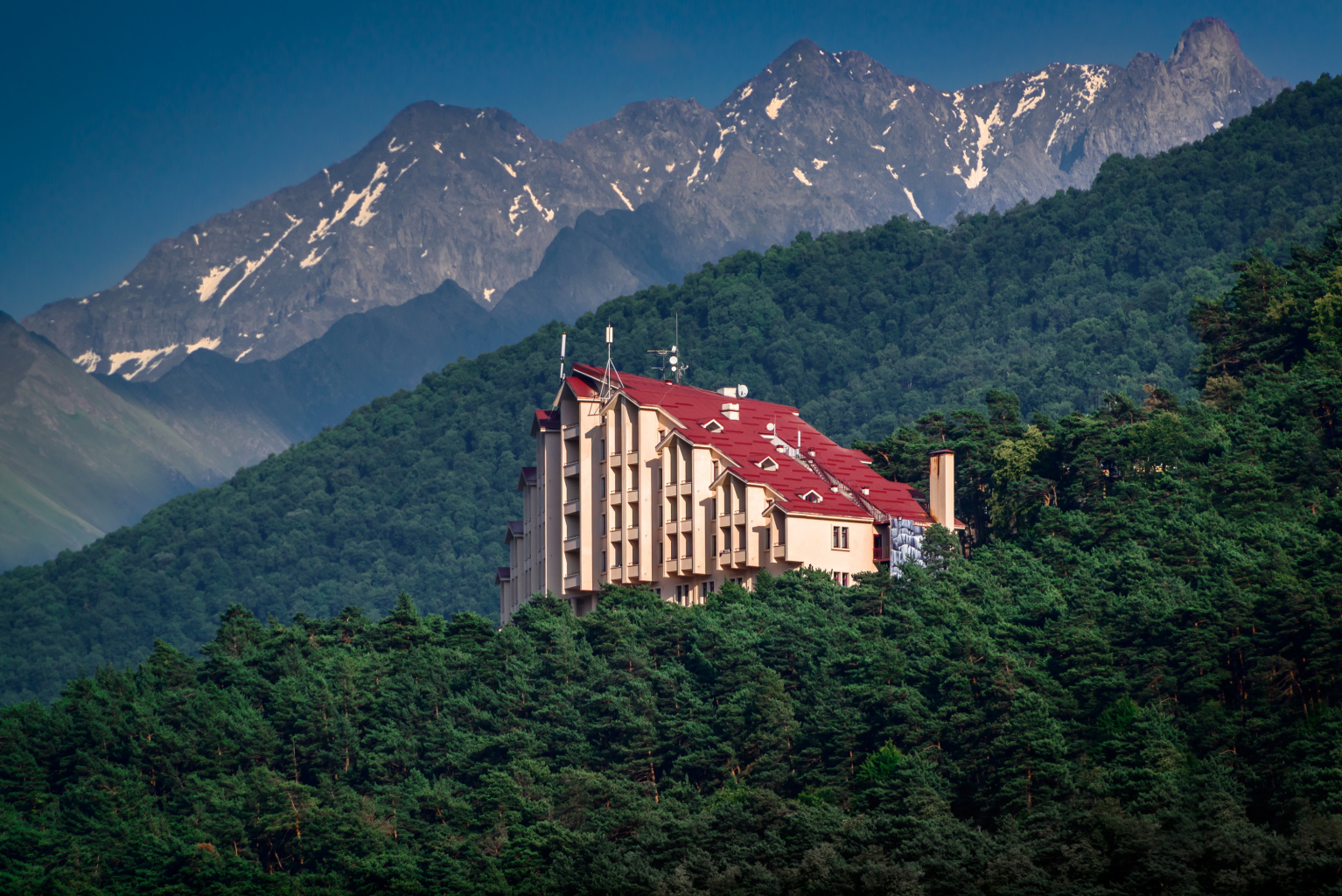 Other “attractions” for tourists are the Erzi Nature Reserve of federal significance with its eight battle towers; the Egikal Tower Complex, the largest one in mountainous Ingushetia; Tkhaba-Yerdy, one of the oldest Christian temples in the picturesque Assinsky Gorge; the Vovnushki Castle Complex built on the peaks of the rocks; the Ingush Nature Reserve, Glory Monument and Memorial in Nazran, and the “Tower of Concord” Tourist Complex in the capital - the city of Magas. 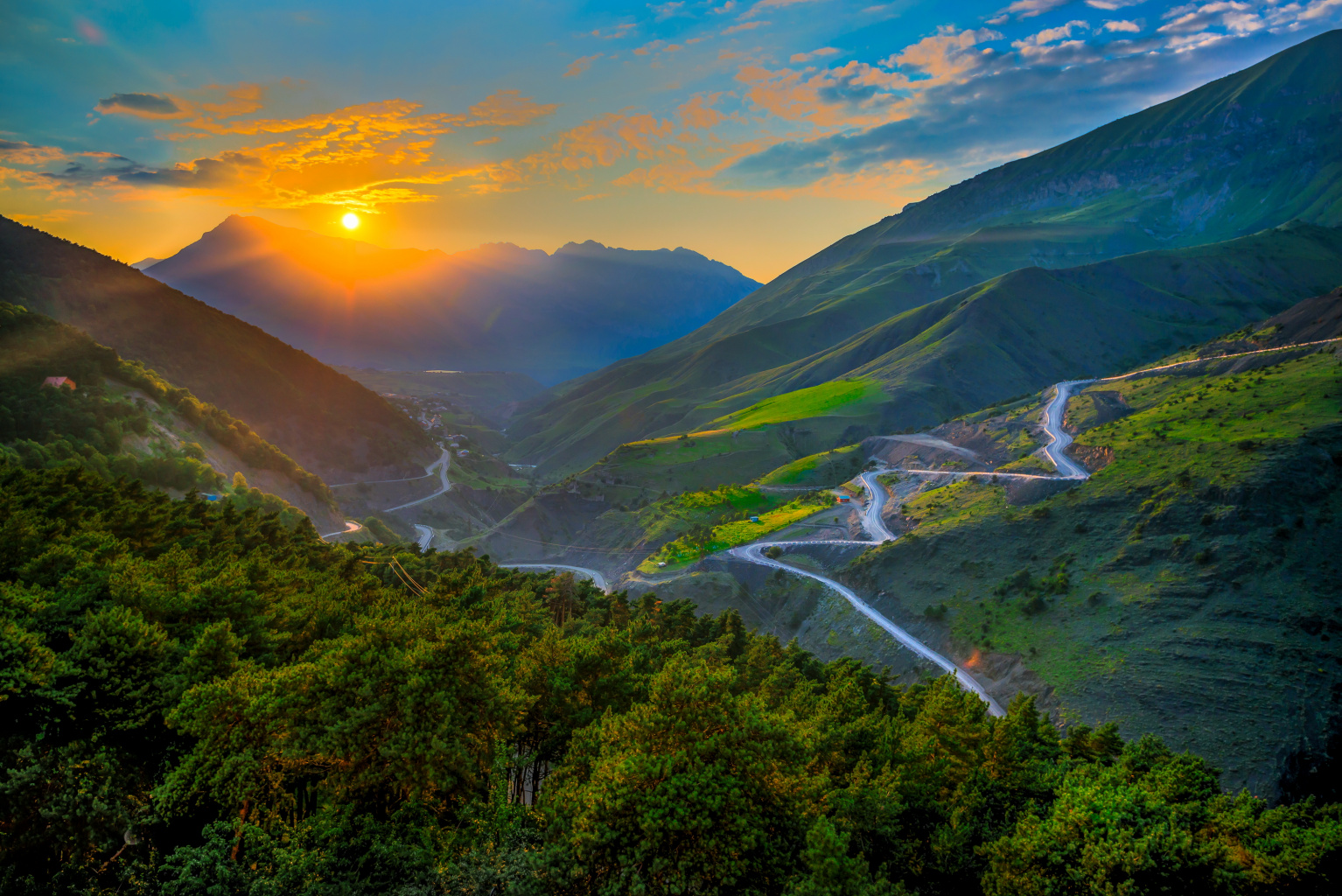 Today, there are 24 routes in the mountainous Ingushetia, including walking trails and automobile routes - both short and many-hour ones, some of them require special training, and the other are suitable for any traveller. The walking and car tours “In the Land of Towers and Legends” held from April to October are very popular with tourists; they take from one to eight days, and the travellers enjoy all the peculiarities and beauty of the land with its majestic mountains and wide plains, medieval castles and towers, canyons and waterfalls ...

- What are the prospects for the development of tourism in the Republic, what are the challenges facing the tourism industry in the region?

- The development of tourism in Ingushetia is based on the creation of a competitive tourism and recreational cluster and the development of cultural, educational, adventure, primary wellness and ecological tourism.

The “Visit Caucasus” Foundation has already developed and approved the certificate of the travel itineraries in the Republic of Ingushetia and the concept of the architectural design code; currently, work is underway to create a navigation system for the region.

Frankly speaking, we have very ambitious plans. The participation of the Republic in the “Tourism and Hospitality Industry” national project will make it possible to significantly advance in the creation of the “Ingushetia” Tourism Cluster, to actively develop the resort infrastructure of the all-season Armkhi Tourism and Recreational Complex as part of the North Caucasian Tourism Cluster, to implement the projects for the construction of a resort centre on the basis of the Achaluki thermal springs.

Work is underway to improve its transport accessibility. In September 2021, the “Lastochka” train began to run daily (Nazran-MinVody-Nazran), and one-way travelling time is 2.5 hours only. In addition, an agreement was signed with Russian Railways in 2021 on launching a new “retro train” route for tourists in Ingushetia.

- Nowadays, such directions as eco-, ethno-, event tourism are becoming popular. What are the competitive advantages of Ingushetia in this area in comparison with its neighbours?

- There are federal and regional reserves in Ingushetia, and 42 tourist routes were developed, including interregional ones and the routes for mountaineering and sport climbing. A number of touristic routes are equipped with recreation areas. We have many sites of ethnographic value. I believe that we are quite competitive in this regard.

Also, the Republic actively hosts event festivals and cultural events of the regional and national level, including the Kaloy Kant festival (the day of Dzhigit (Caucasian horseman)), the folklore and ethnographic Sesariy Tsey festival (the day of the Ingush “Amazons” (women riders)), the Dosho Guire (Golden Autumn) festival, and others. The folklore and ethnographic festivals, competitions, national songs and dances are an excellent addition to the “must-see sights and events” programme allowing the travellers to get acquainted with the history, architecture and nature of the Republic of Ingushetia.

The readers of your EcoTourism Expert portal are welcome to visit the Republic of Ingushetia! 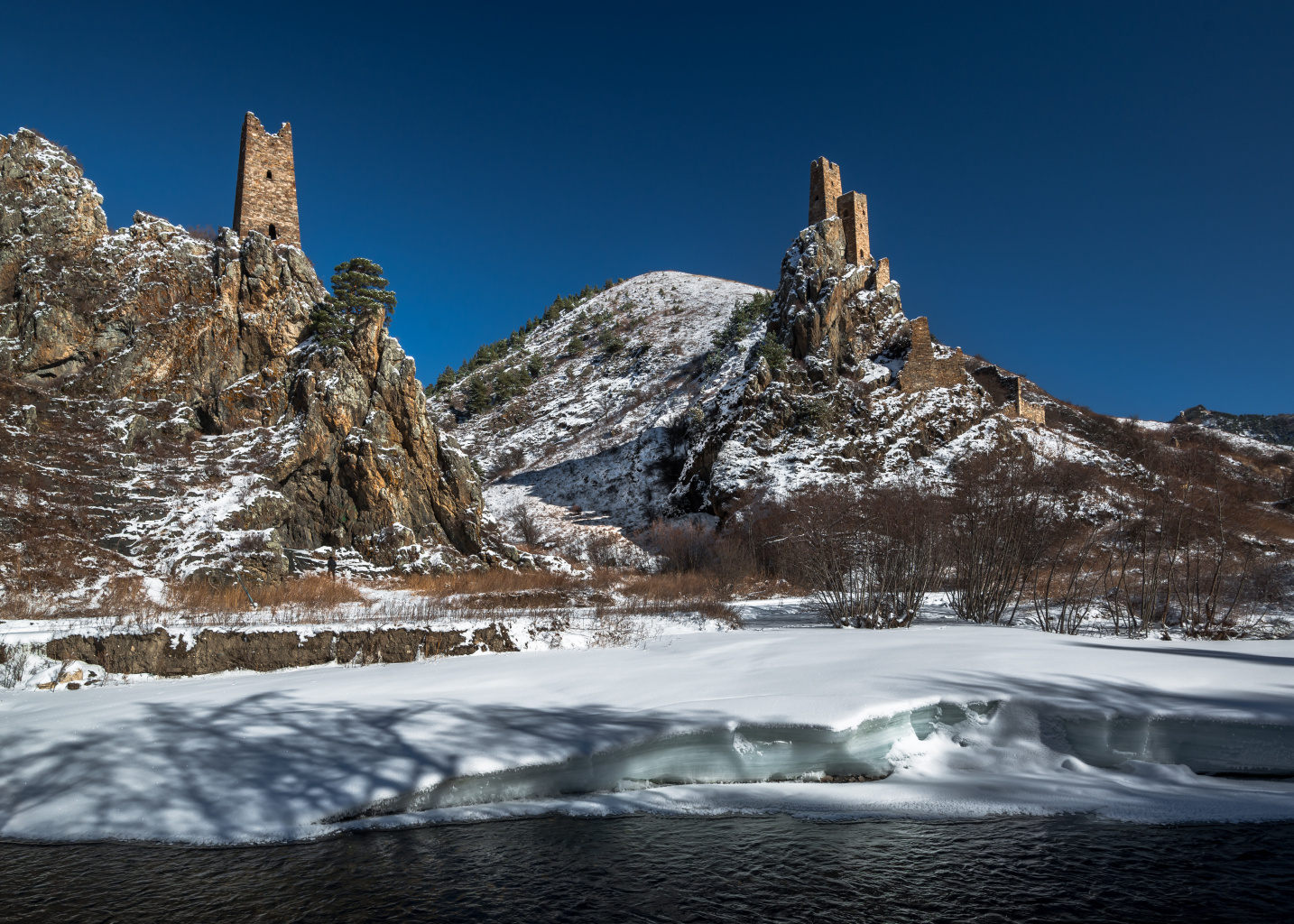 The medieval architectural complex Vovnushki (translated from Ingush as the “place of battle towers”) is located in the narrow Ozdi-Chozhd Gorge of at the ends of the slate ridges and consists of two separate impregnable castles connected by a suspension bridge in ancient times. The approaches to the towers are blocked by powerful fortress walls perceived as a natural part of the mountain. The Guloy-Khi River carries its waters along the bottom of the Gorge. In 2008, the complex became the finalist of the “Miracles of Russia” competition. 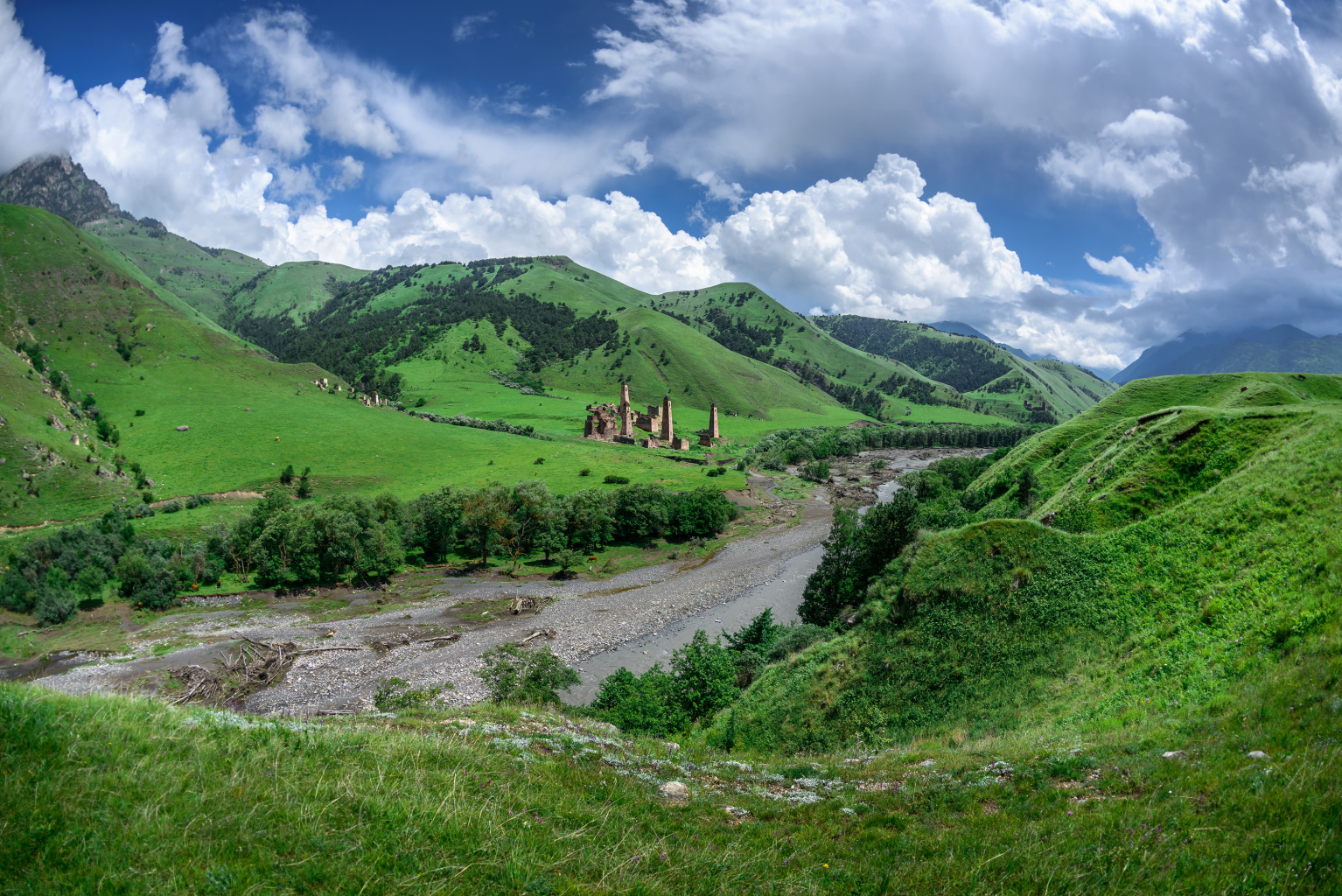 It is the “Heartland” of mountainous Ingushetia where three most famous tower complexes are located, such as Egikala, Targim, Khamkhi ones, as well as two Christian temples - Tkhaba-Yerdy and Albi-Yerdy. 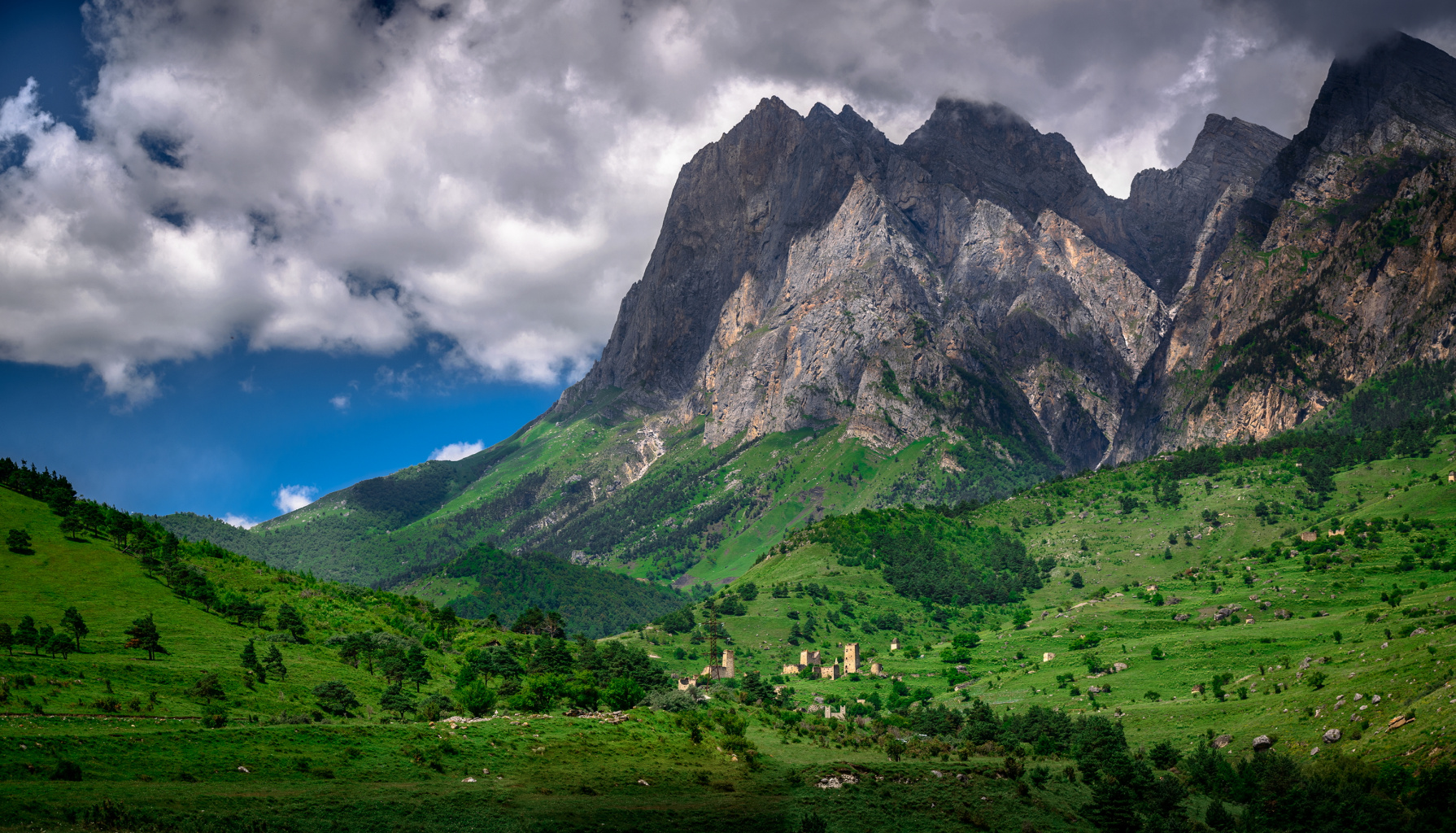 Historically, the medieval town of Egikal located on the southern side of Mount Tsey-Loam in the Targim Depression, was the cultural, political and economic centre of mountainous Ingushetia. Currently, one 29-metre battle tower survived decorated with a cross shaped ornament, as well as more than 60 ruined tower structures. 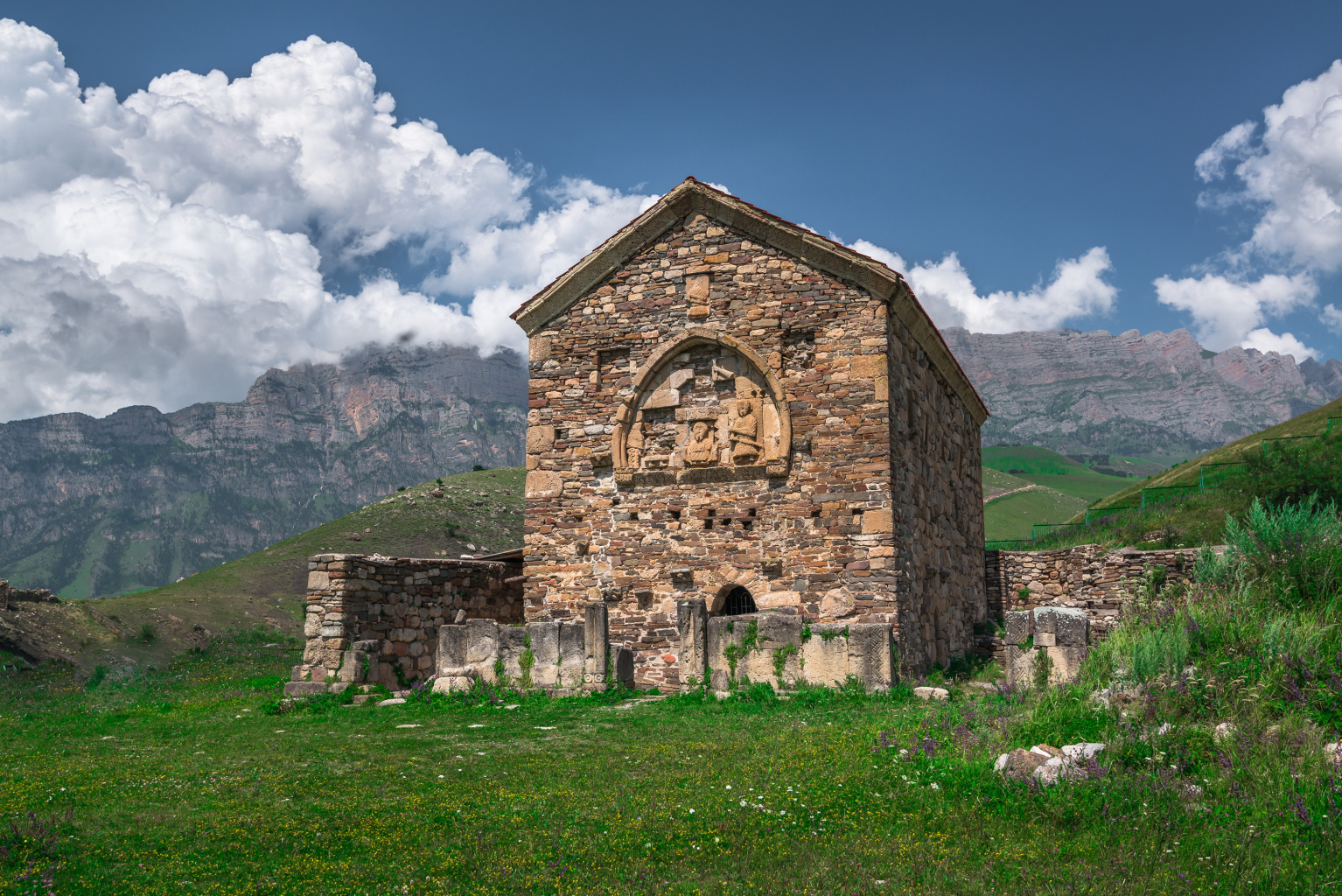 Tkhaba-Yerdy (8th-12th centuries) is one of the oldest Christian churches in Russia located in the Targim Depression on the left bank of the Assa River in the mountainous Dzheyrakh District of Ingushetia. This religious building was built on the site where a pagan sanctuary was located earlier. 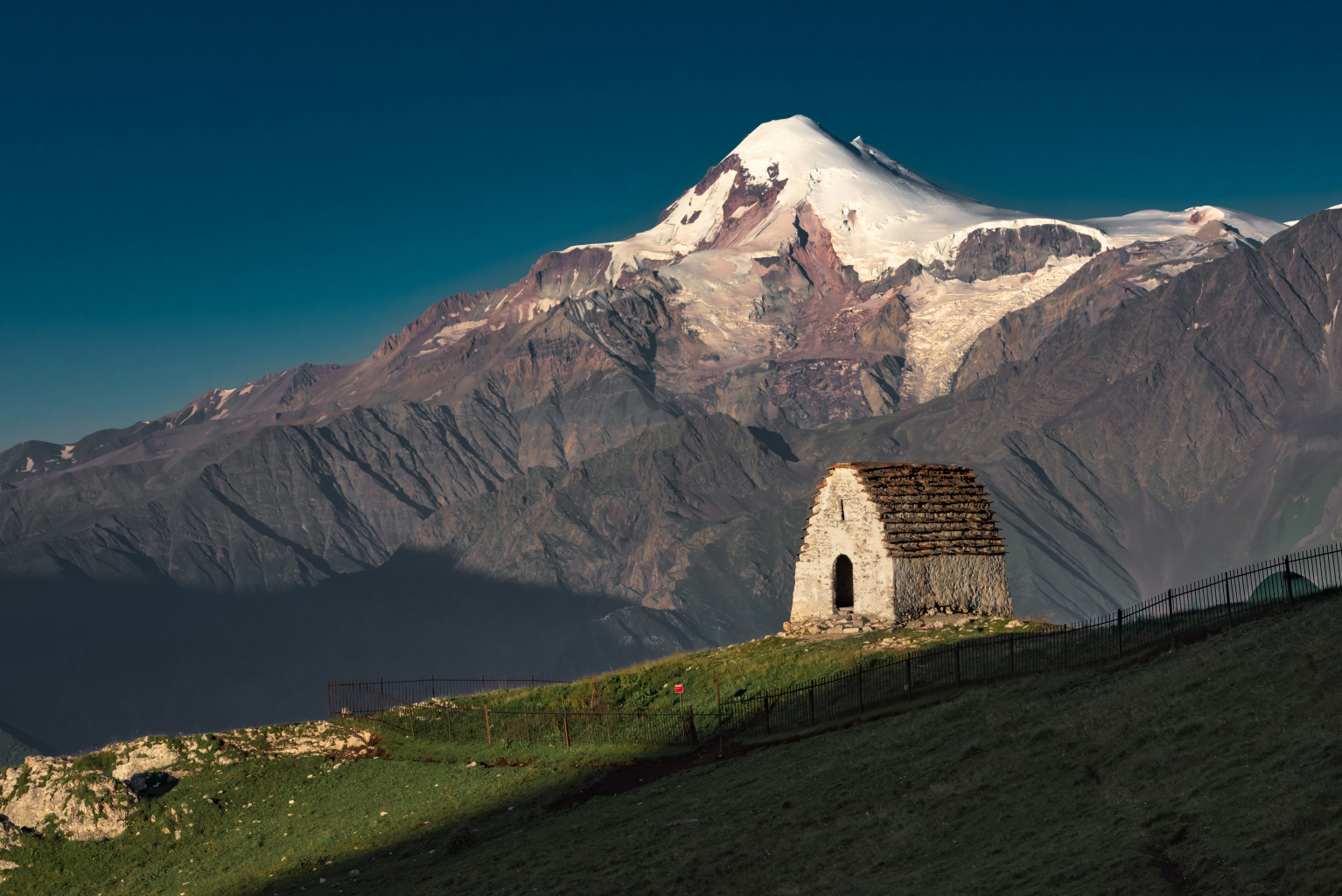 The Table Mountain is the main peak of the Rocky Range and dominates the landscape of the Armkhi River Valley and the northern foothills. The temple-and-sanctuary of Myat-Seli is on the southern slope. From the top of the mountain, the travellers can enjoy the stunning views, including Mount Kazbek and the city of Vladikavkaz.

The Tower of Concord is the highest building in Ingushetia built in 2013 in the city of Magas, in the style of a four-fold medieval Ingush battle tower. The Tower’s height is 100 metres. It hosts cultural events, conferences, youth forums, an art gallery and an ethnographic museum. At a height of 85 metres, there is a viewing deck made of super-resistant glass, which offers a panoramic view of the city and its surroundings.

Photos courtesy by the Tourism Committee of the Republic of Ingushetia

George Pankov
exclusively for EcoTourism Expert
More
Recently, outstanding issues of ecotourism have received an appropriate response and things are definitely on the move
Interview given by Pyotr Shpilenok, Director of the Kronotsky State Nature Biosphere Reserve
How pests and beetles are controlled in Sochi