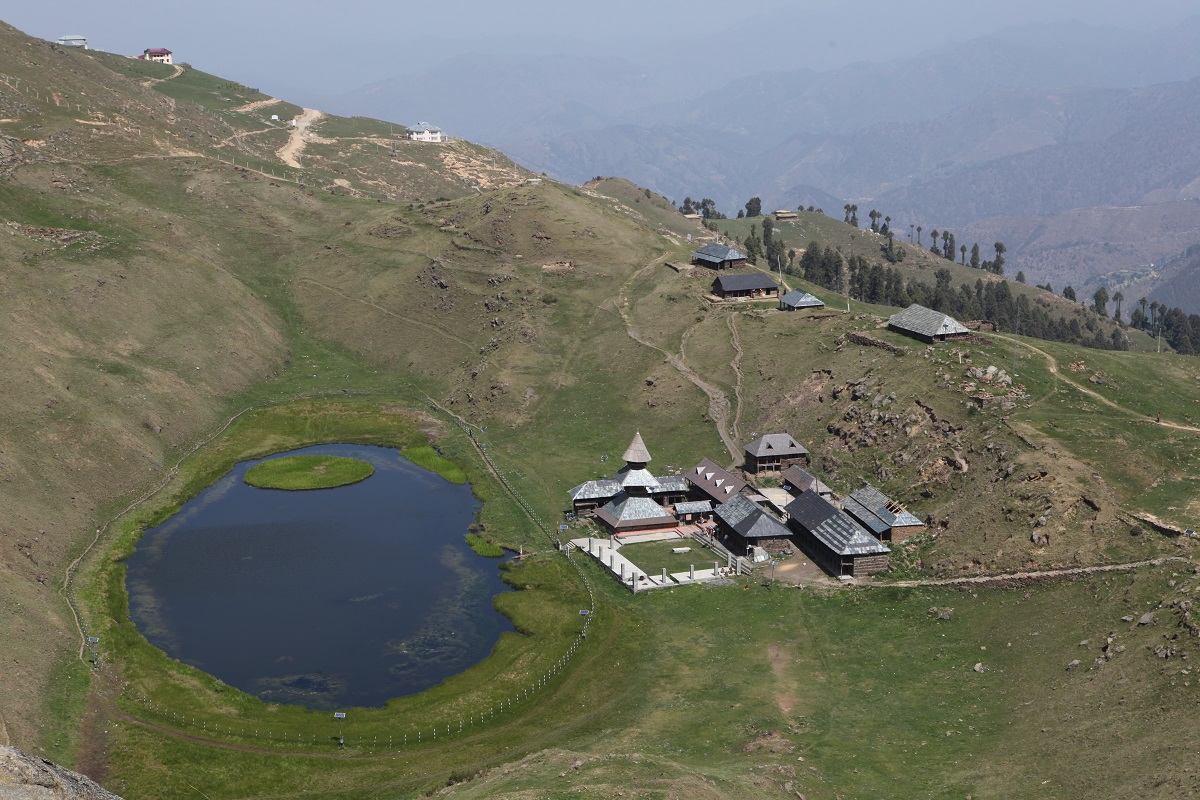 Prashar Lake located about 50 km from the city of Mandi is rightfully considered one of the ‘pearls of nature’ in the Western Himalayas. Since ancient times, it is associated with the hermit sage Prashar who chose this place for his shrine. A three-storied temple towering on the shore - looking like an eastern pagoda - is dedicated to the legendary saint. 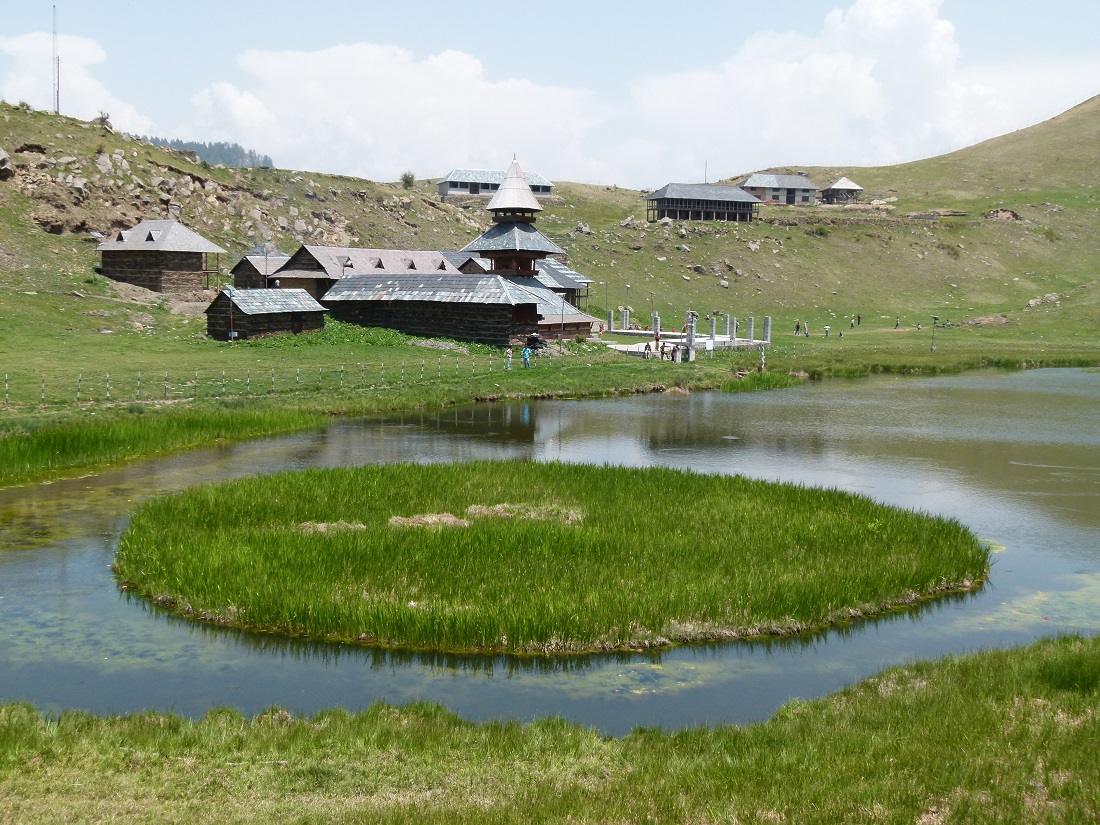 The most famous route to Prashar Lake starts from the northern outskirts of Mandi. It is also convenient to get to the Lake by car from the other side of the mountain pass. The road starts directly from the national highway leading to Kullu and Manali, at the entrance to the local airport. Quite well-kept, albeit narrow, the trail quickly climbs upward winding along the slopes of the picturesque mountains over dizzying cliffs. The final unpaved road section lies among the pines and cedars of a dense coniferous forest, and then goes out onto the spacious slopes of stunning alpine meadows. 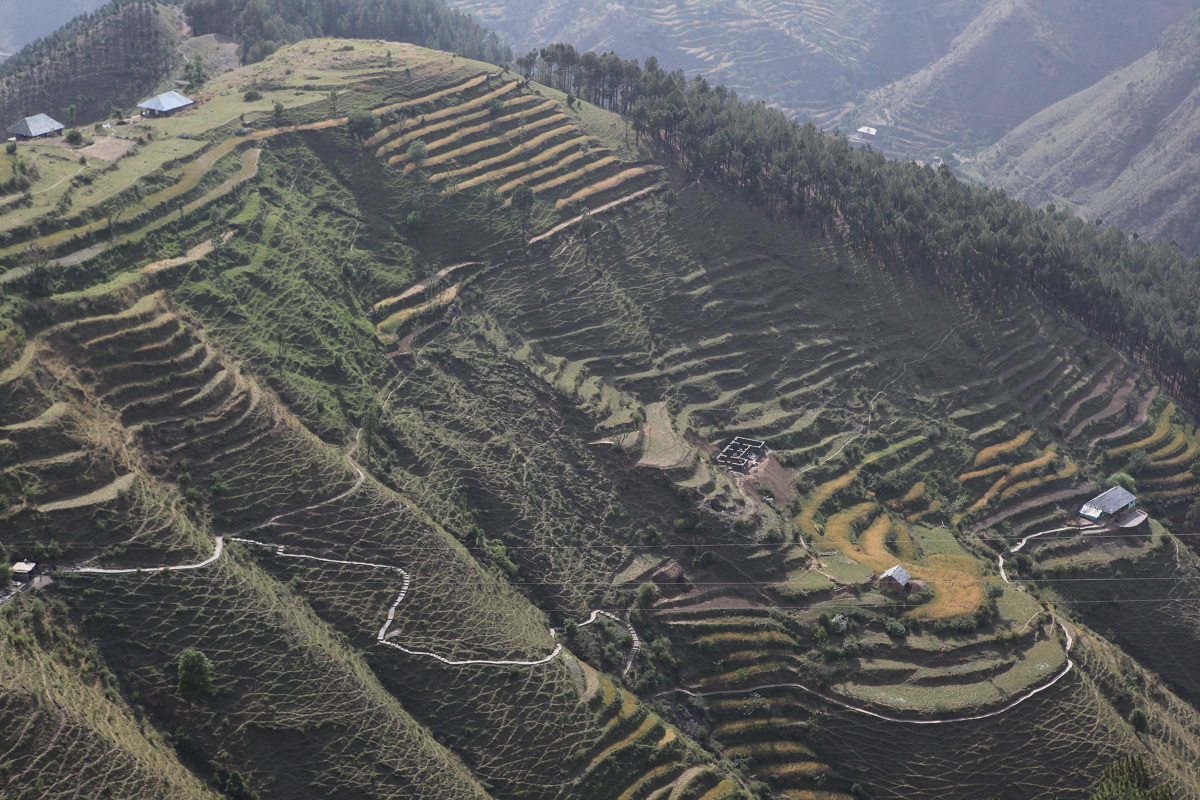 The Lake is on the top of the mountain at a height of about 2,730 m above sea level in a hollow looking like a volcanic crater. The amazing round floating island formed from accrete aquatic plants emphasizes the similarity of the oval-shaped Lake surface with a mysterious eye gazing into the sky.

You can go down to Prashar along the paths or stairs made of rough finished stones. Walking around it along the wire fence, you feel the edge of the shore soft and elastic under your feet, the shore of the Lake is overgrown with dense grass and made of a thick layer of many years-long vegetation sediments. It is curious that the depth of the Lake has not been precisely determined, probably, because to do this, it would be necessary to disturb the peace of its sacred waters. Its level has small seasonal fluctuations depending on rains and the melting of snow accumulated in winter. We arrived at the beginning of May when water was a few steps from the platform on which the temple was built. 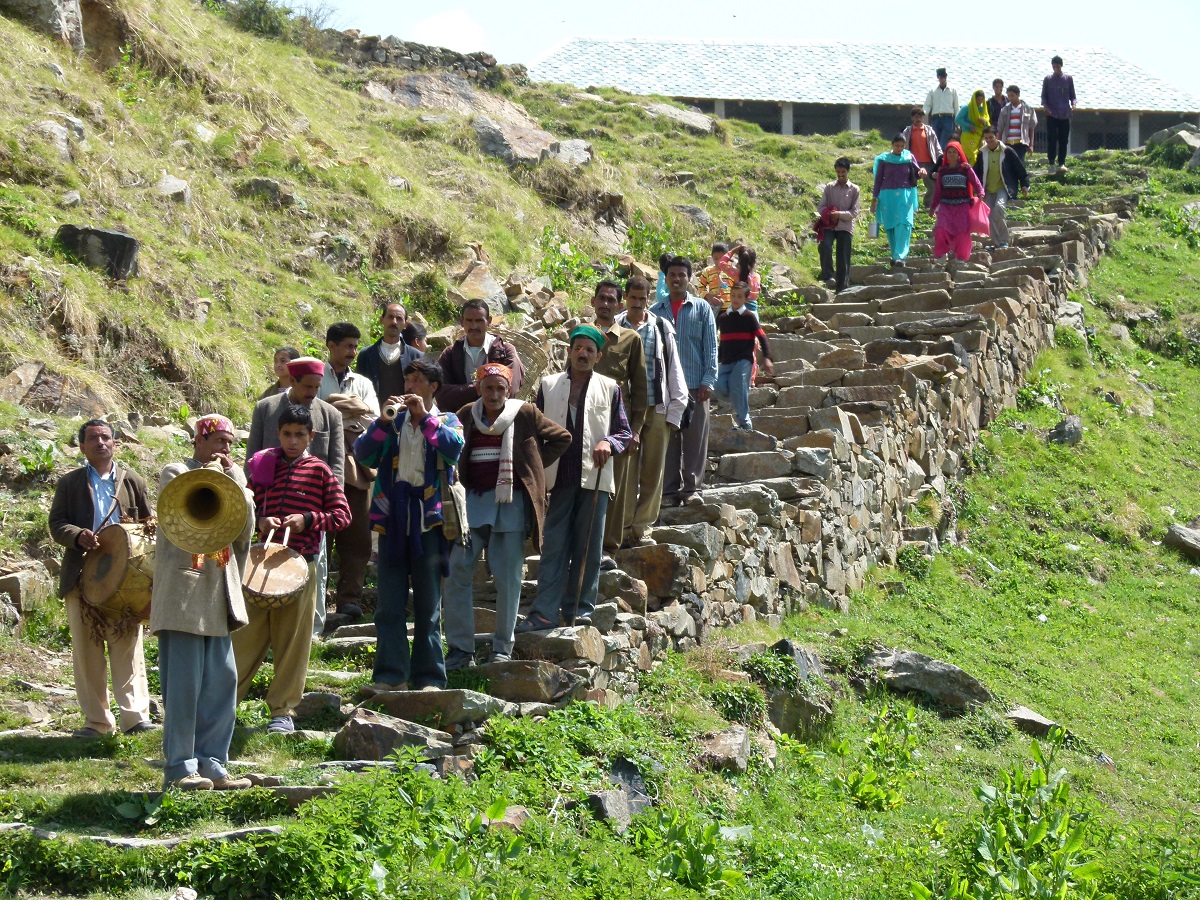 In good weather, a magnificent view of the snow-covered ridge of the great Himalayas opens from the crest of the ridge surrounding Prashar. From this height, the temple looks like an elegant decoration. Legends say that it was built in the 13th century from the trunk of a single huge tree.

Like many holy places in the state of Himachal Pradesh, the temple and Lake attract the followers not only of the region’s ancient pagan beliefs, but also of Hindus and Buddhists. But this place is most popular with the Himachal people. Pilgrims get here even from very remote towns and villages. Many of them come specifically to perform the ceremony of offering sacrifices here - in gratitude for the benevolence of the divine powers - and to pray for their support. As a rule, a sheep or a goat is sacrificed.

By a strange coincidence, the first sacrificial animal was delivered that day directly to the mountain slope where we sat down to have a rest and admire the surrounding scenery. A local family was not too lazy to climb up the top of the hillside and joined us along with the sheep carcass without its head. Probably, they were going to make a feast later, after returning home, and climbed up the mountain with a difficult burden just to have more unforgettable impressions. It seems that fortune favoured us because in the temple, we saw the prelude of the action they had just experienced.

Going down to Prashar Lake, we noticed a procession, the arrival of which was announced by the sound of huge trumpets and the noise of drums. About 50 people walked slowly from the ridge down the stairs leading to the temple. The trumpeters and drummers were ahead of the people, and they were followed by a crowd of men and women, children and elders, nicely dressed in their best clothes. They had already settled down in the courtyard of the temple when the last people also arrived - they were two lean mountain men who pulled a couple of well-fed sheep on the ropes.

Frankly, we were anxiously expecting that the ceremony of offering sacrifices would take place right before our eyes in the centre of a stone-paved area as we saw a dark square patch of earth there uncovered by a stone slab. Flies circling annoyingly above it made us think that it was on this place that the blood of an innocent victim should be shed. In fact, everything turned out to be somewhat different. 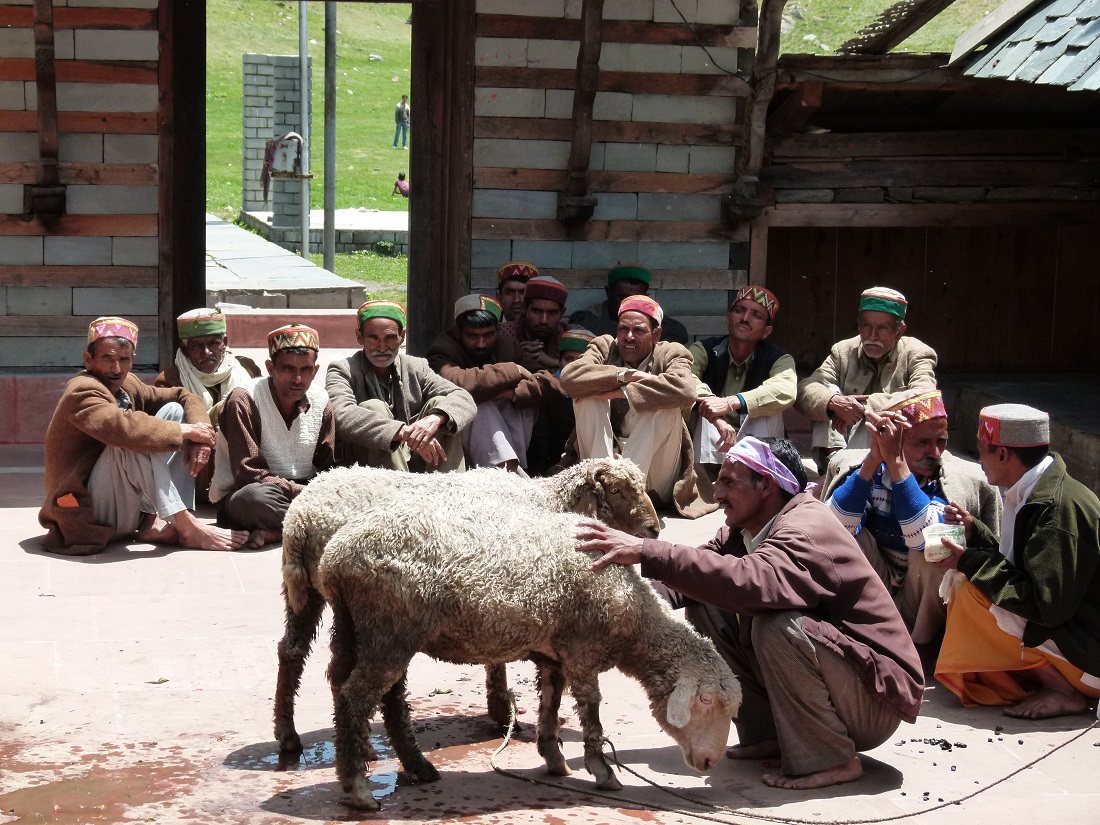 As the customs of other peoples also prescribe, the Himachal ceremony of offering sacrifices is a strict rite. Its key goal is to make sure that the deity will be pleased with the sacrificial animal. The first part of the ceremony did not take long. Two stubborn sheep were brought close to the canopy at the entrance to the temple where the praying local pujari priest threw flower petals at them and fumed them with incense. Following this, water brought in a steel jug from the Lake was poured on the heads of both animals. It is generally accepted that if the animal shakes its head after such an unpleasant procedure, this means that the sacrifice is accepted.

Surprisingly, only one sheep reacted in a proper and quite natural way to the ‘ceremony’. Moreover, an amazing metamorphosis immediately occurred to it as it seemed that the sheep fell into a state of half-dozing and became completely calm and indifferent to what was happening around. Another sheep that did not want to shake off the water kept on being active, paced around the site dragging the owner along with it. Several repeated attempts to sprinkle it with water and achieve the desired reaction were in vain. 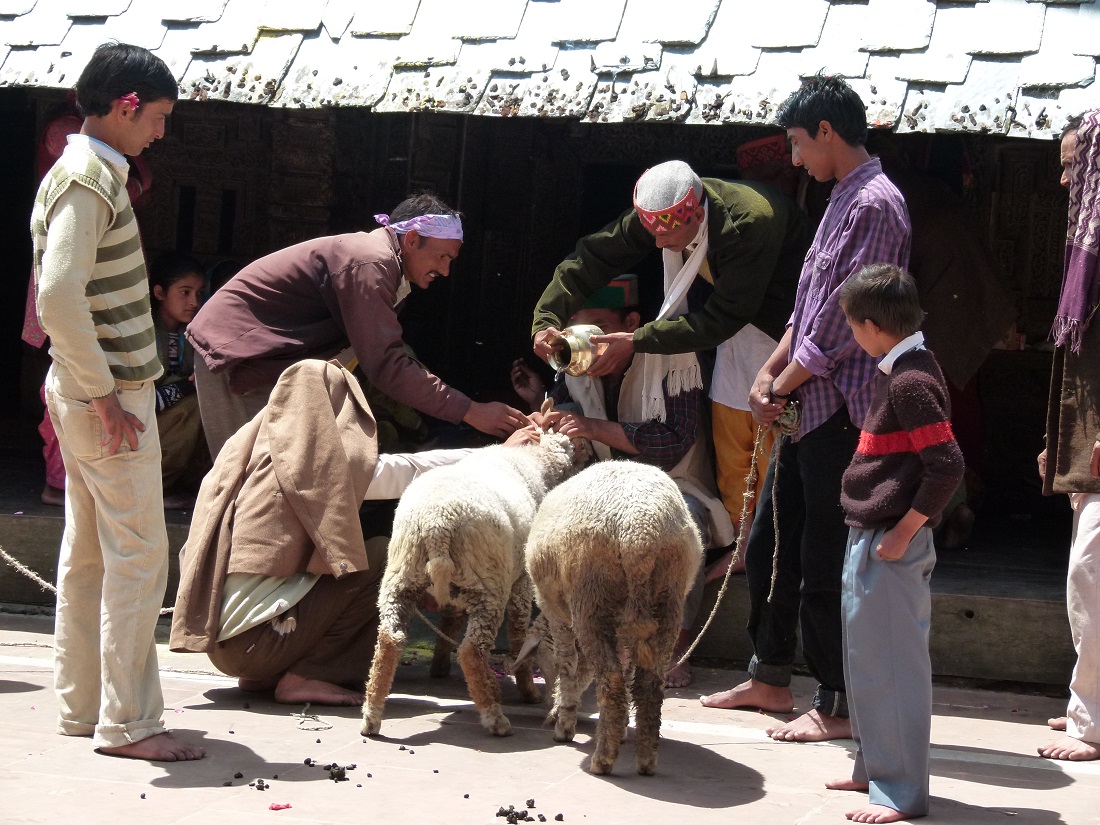 Such a situation was not expected by the audience. The embarrassed sheep owner was very upset. The people did not remain indifferent, either. Critical men from a small group at the entrance were especially active. It seemed to some of them that the sheep shook its head. Others insisted that it did not. The resulting dispute that took a long time did not lead to a consensus. Then, the experienced pujari priest made a trick: on his advice, one of the participants in the ritual pushed orange marigold flowers mixed with green mud from the Lake into the ears of the stubborn animal. Water was also added. But even such a sophisticated procedure did not produce the desired effect. After a short discussion, the procedure was repeated several times with no result. Nevertheless, the sheep remained completely indifferent to all their efforts and demonstrated its life-loving character and its complete unwillingness to be sacrificed. 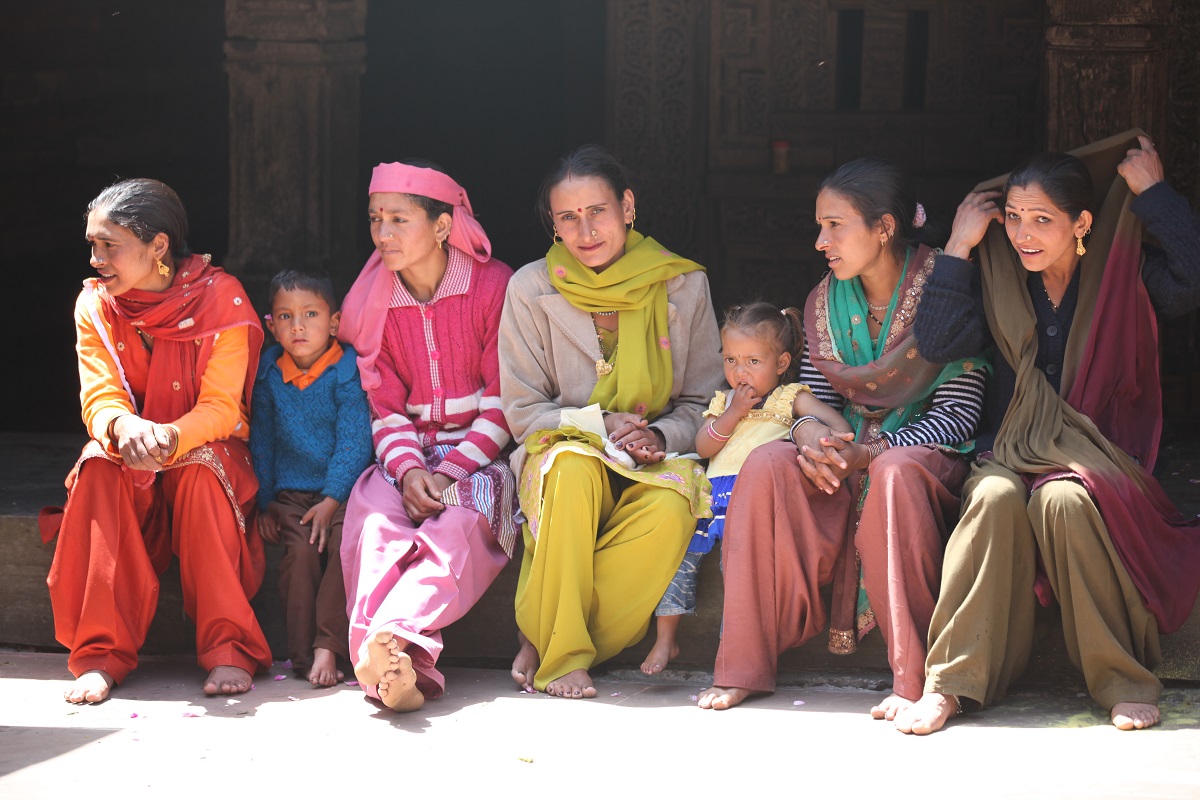 It seemed that another discussion between the ‘fans’ and the priest as a ‘referee’ ended in a draw, and all the people left the temple courtyard with the sheep. However, in spite of an uncertain verdict, the end was inevitable. The confirmed readiness of the divine forces to accept one of the sacrificial animals was applied to the other one, and right around the corner of the nearest building, both sheep were beheaded by blows of a crooked ritual knife resembling a machete. The bloody scene noticeably raised the spirits of all those who took part in the ceremony. The men began to actively prepare for the feast: some men cut the sheep’s carcasses and the others peeled and chopped onions, carrots, tomatoes, chopped up the firewood. As you can see, the highlanders rightly judged that the naughty disobedient sheep should not spoil the unforgettable fest, which inevitably turns into a visit to the sacred Prashar Lake...