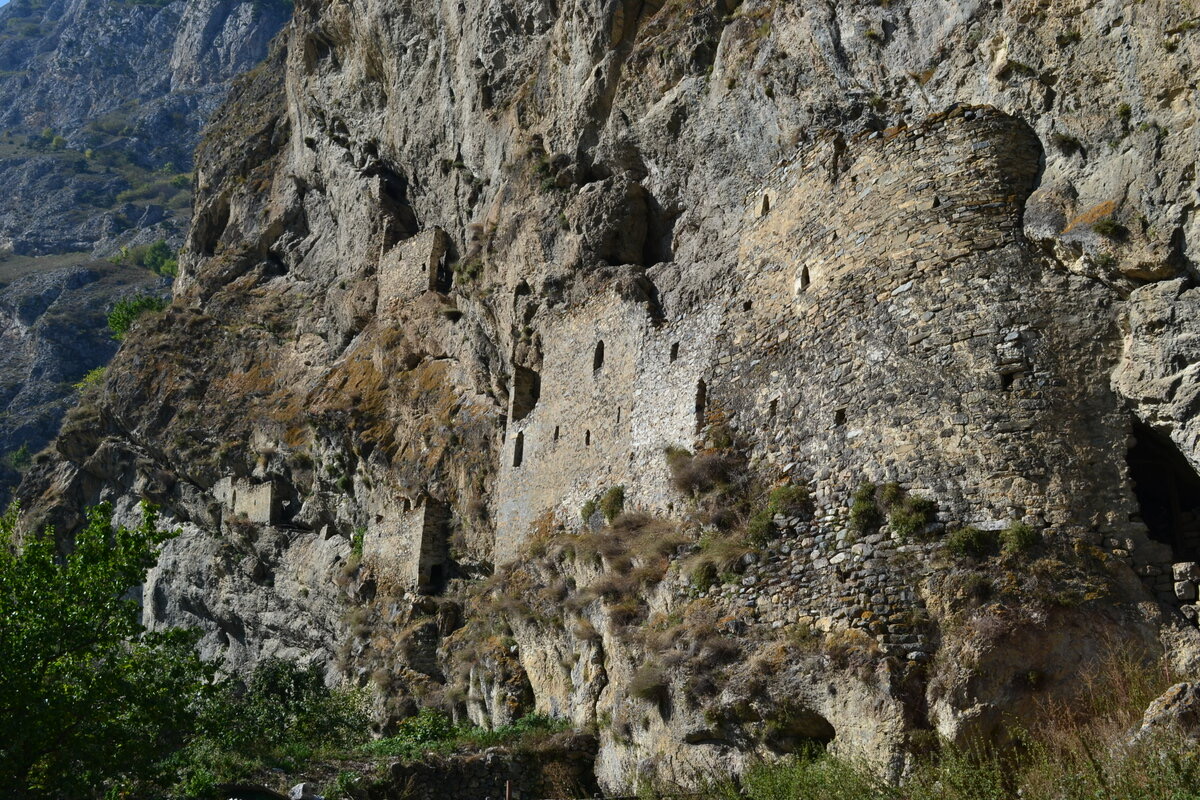 Alexey Murashkin
especially for EcoTourism Expert
04-14-2022
The Dzivgis Rock Fortress is located 40 km away from Vladikavkaz. You may not notice it at once, and see it, perhaps, only when your guide draws your attention to the man-made structures in the almost vertical wall of the mountains. For at least five centuries, the Fortress has been welcoming all welcome guest and unexpected visitors coming to the Kurtat Gorge. It protected the passage to the Gorge since it had an ideal location. Several towers were built at the place where the turbulent Fiagdon River flows, and from the other side, the huge gloomy Kariukhokh, one of the peaks of the Rocky Range, which amazes with its huge southwestern walls with a kilometre difference in elevation, meets those who come. 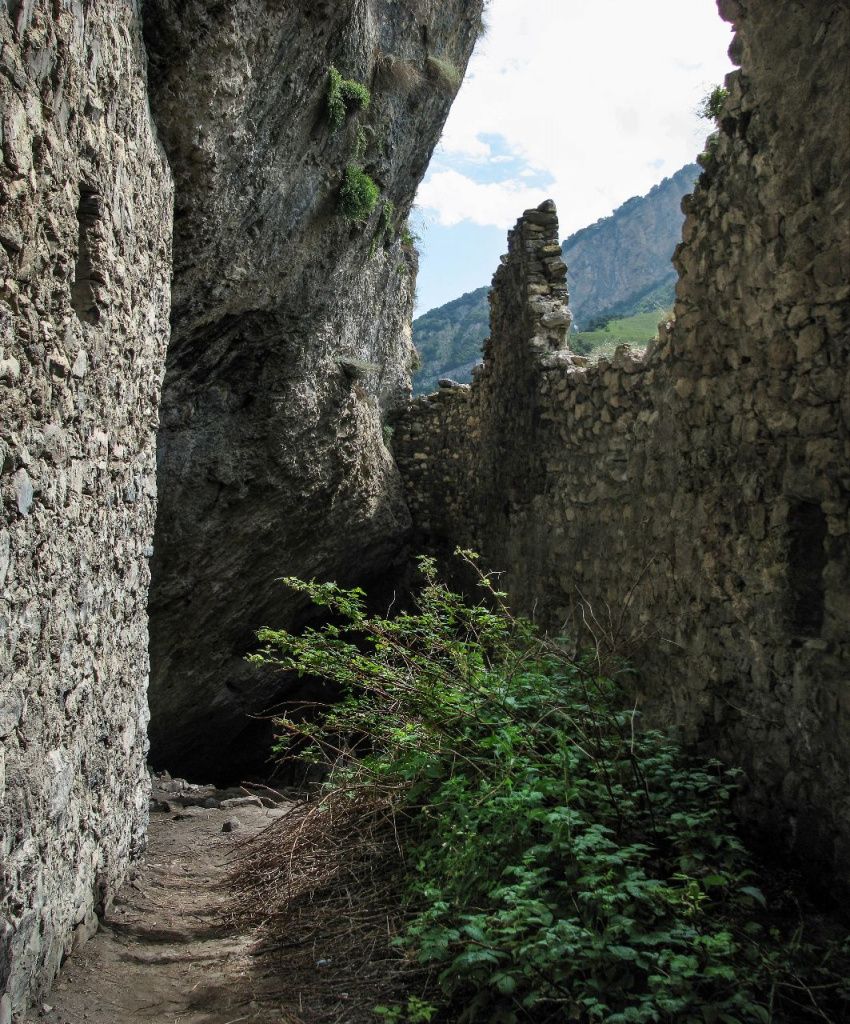 Earlier, one could get to the village of Dzivgis, to the Kurtat Gorge, and then to the Fiagdon River valley along a narrow and very dangerous road perfectly seen from the walls of the Dzivgis Rock Fortress. Probably, this explains the reasons for the construction of the Fortress here.

This fortification was built by the Alans. The Alan tribal community became the basis of Alania, an early feudal state in the central Pre-Caucasian region, which existed before the Mongol-Tartar invasion and was one of the first states on the territory of present-day Russia to adopt Christianity as a state religion. In 2022, the 1100th anniversary of the Christianization of Alania will be celebrated as an all-Russian holiday.

The Dzivgis Fortress consists of seven separate defensive fortifications at the entrances to the natural caves on one of the Rocky Range slopes. The tourist groups have an access to the so-called Central Tower built on top of the entrance to the largest of the caves. This is a rather spacious place, from which a tunnel goes several tens of metres deep into the rock. 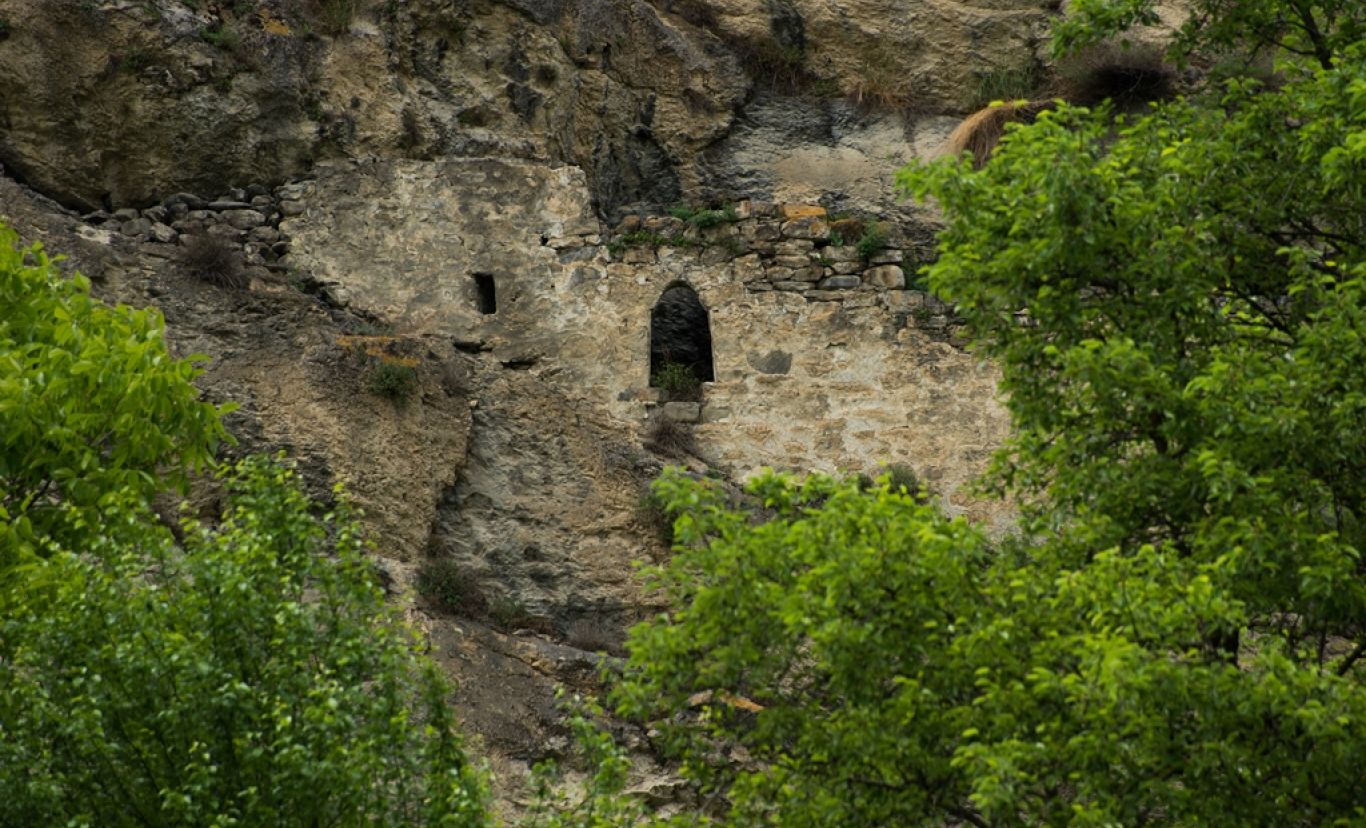 According to one of the legends told by many guides, this is a part of an underground passage leading to the opposite side of the rock. And although this is not true (the studies have shown that the tunnel rests against a monolithic rock, and not against a blockage), such stories are very interesting. The views from the openings in the tower’s wall are very beautiful, the largest of which turns out to be not a “window”, but the entrance to the cave; and the gap, through which the tourists enter the tower now was made especially for them. 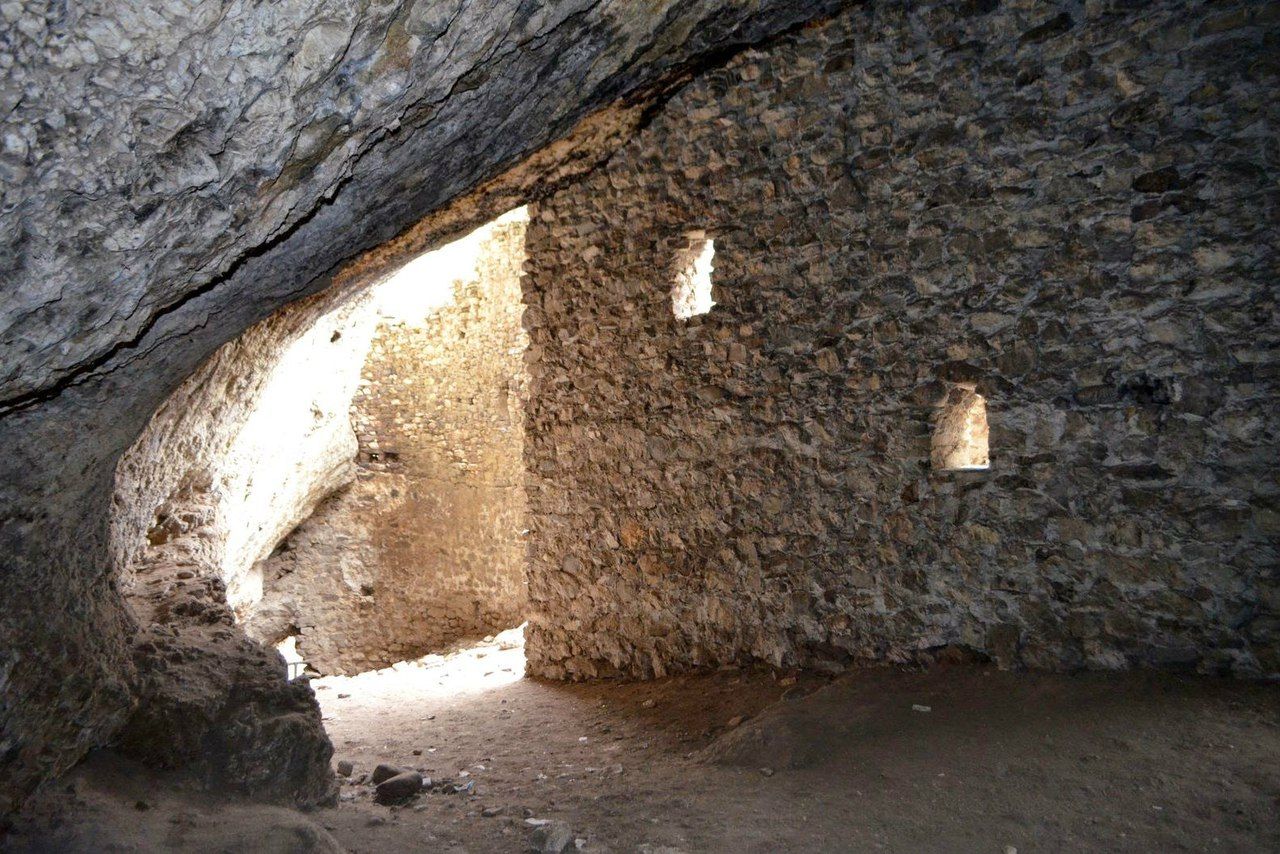 And suddenly, an unpleasant thought comes to your mind that the people who built the Fortress came to it not to enjoy the views from its windows, but to save their lives. When they were in danger, all the villagers, including women and children, took refuge in the tower, bringing the necessary belongings and food along with them. And they had to stay in the Fortress for a long time. On the ceiling of the cave, soot is seen that was from those old fires when they cooked.

The view around the Fortress is also stunning, including an almost sheer cliff, a man-made wall, and splits in the rock where smaller towers were built. The question arises about how it all was built. How were the wooden bridges constructed to provide the communication between the towers? Actually, it is easy to find descriptions of their designs in the Internet and other sources. But still, HOW were the logs inserted into the splits in the rock at dizzying heights, and HOW was the wooden flooring laid on these logs? HOW were they dismantled when the enemy approached and HOW were they laid again after the enemy’s retreat?

Now, you can get to the Fortress’s castles through a deep gap only. The tourists have to climb up the destroyed stone walls for about 10 metres. The gap is not equipped with any facilities, so the travellers can feel like ancient warriors overcoming a fortress siege. 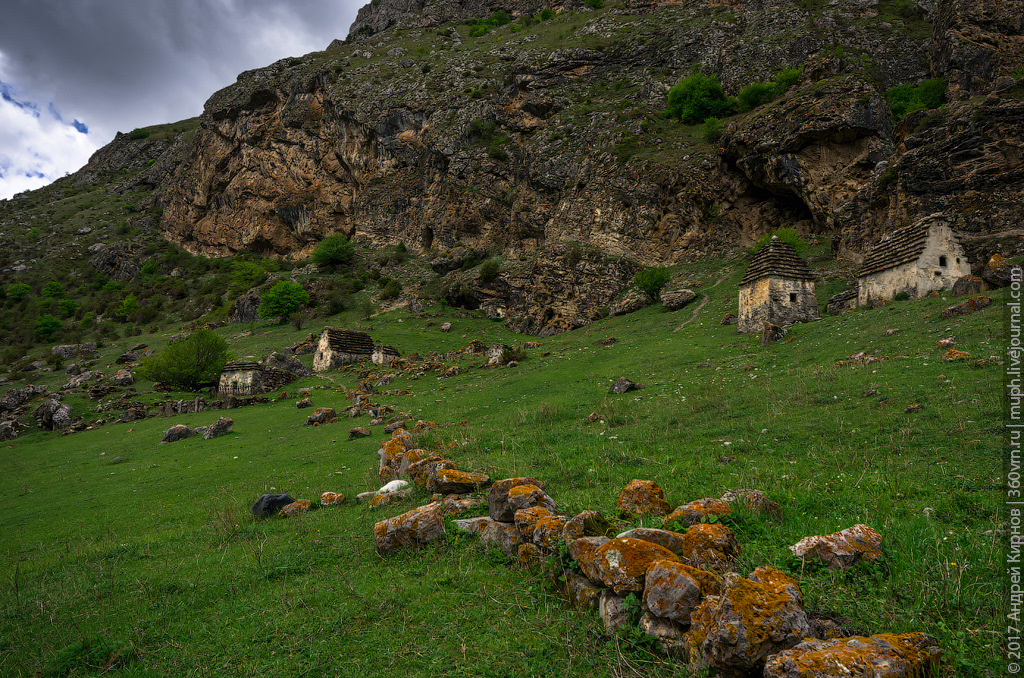 According to some reports - and this point of view is shared by most of the guides accompanying numerous groups of tourists - this citadel has never been captured by their enemies. According to others, Tamerlane managed to break down the resistance of its defenders and killed everyone who was within its walls. The latest version is supported by the burial sites near the Fortress with about a hundred people, these burial sites date back to that era.

The Dzivgis Fortress is by no means the only attraction for the tourists coming to the Kurtat Gorge (rather, in the valley of the Fiagdon River). Many well-preserved tombs are located just next to it. Many items of the medieval Alans’ life and household items were found in them. Nearby, the adjacent temple of St. George and the ancient Alanian most holy place, Dzivgisy Uastyrdzhiy Dzur, are located. 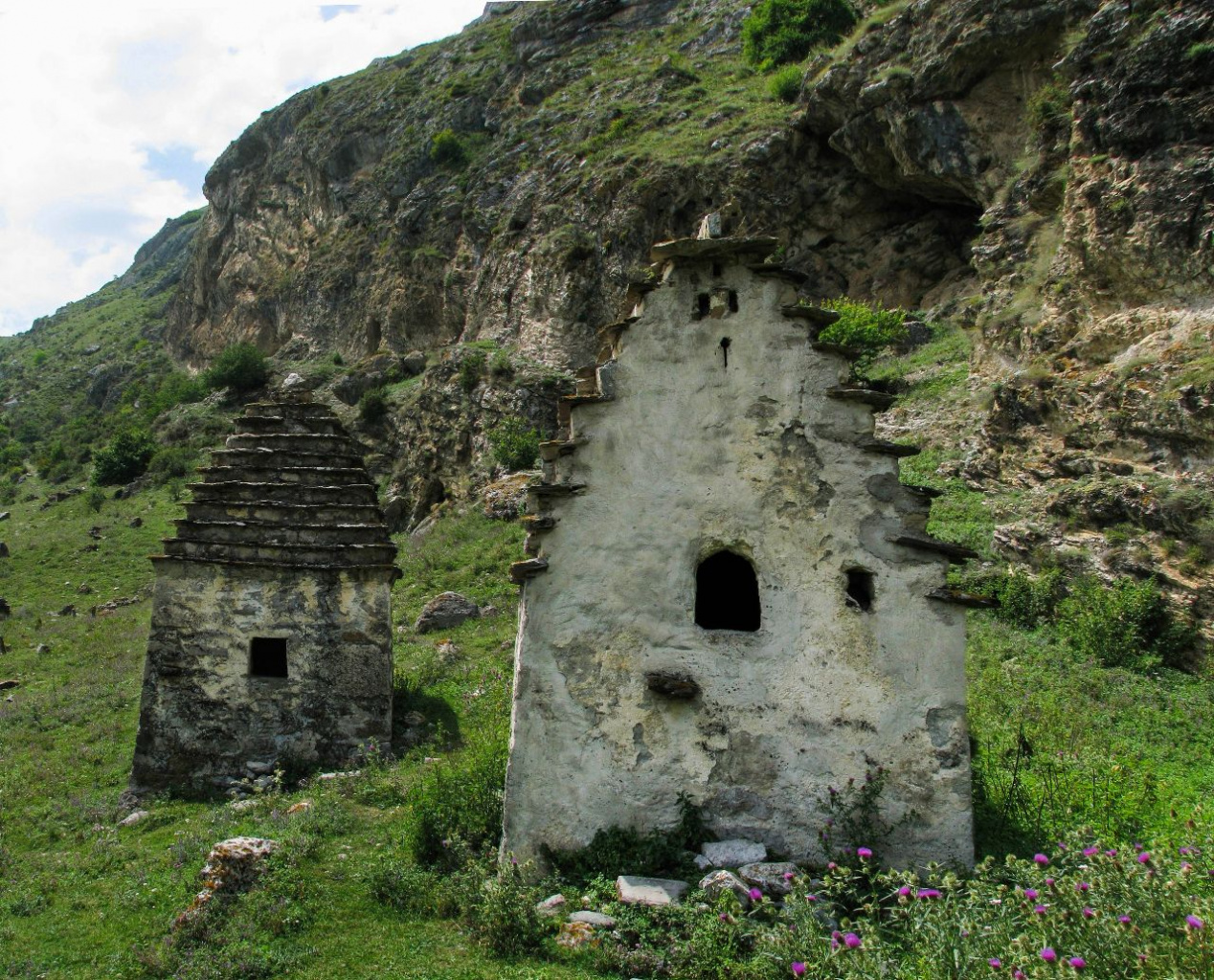 After a short driving a little further along the valley of the Fiagdon River, you will find yourself in the village of Lats, where the battle towers still exist and you can see the Chashechny Kamen (Cup Stone) - a stone table with cup-like depressions along the entire surface. And from the village of Fiagdon, you can walk along a stone path to the village of Tsmiti, which is a real open-air museum with its 11 family towers, a necropolis with 16 tombs, other buildings of the 14th-19th centuries.

Or you can drive a little further along the valley and get to the Alan Monastery of the Holy Dormition, the highest mountain monastery in Russia.