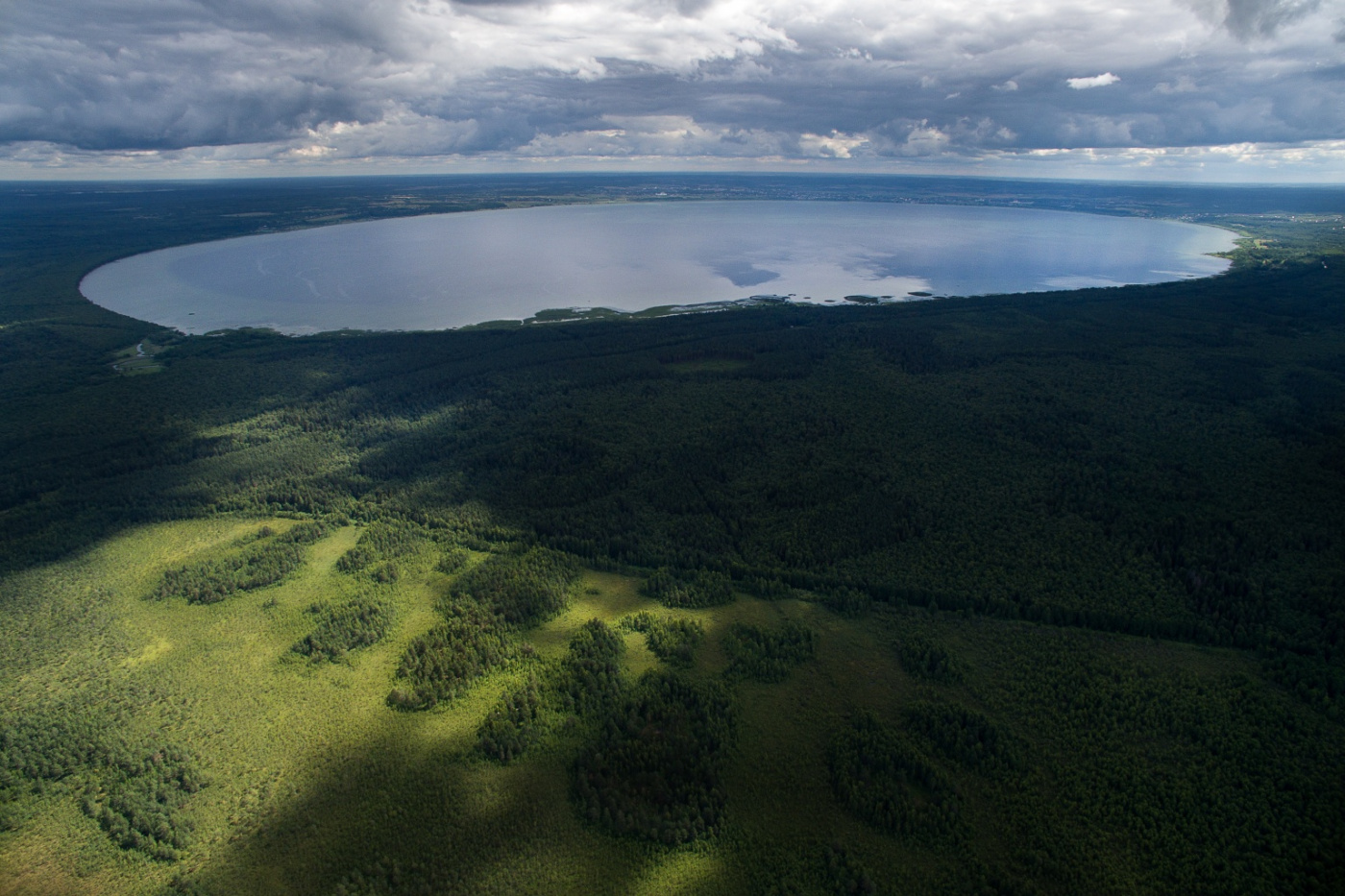 Around Moscow, there is a chain of towns that are the core of what is called “Ancient Russia”. These towns of North-Eastern Russia reflect the concept of “authentic Russian” ones, and since the times of the Soviet Union, they have attracted both foreigners and domestic travellers. It is tourism that could become a city-forming industry for them taking into account that the old arts and crafts industry still exists in these places and still is part of the cultural code of Russia. The correspondents of EcoTourism Expert have seen how the towns of the Golden Ring are developing, what - and to what extent - was done to preserve the country’s priceless cultural heritage.

Even the most demanding tourists do not get bored in ...

Pereslavl-Zalessky located 130 km from Moscow gives its guests the opportunity not only to immerse themselves in “the lore of ages long gone by” (by the way, the town is 5 years older than Moscow) and the beauty of the surrounding nature (Lake Pleshcheyevo alone is worth something!). After visiting this pearl of the Golden Ring at the weekend, you can take part in many more modern entertainments - from flying in the hot air balloons to travelling by small yachts and spending your time in the quests based on the Russian folk fairy tales.

However, the travellers immerse themselves in history and they are surrounded by a large number of tourists as the town is officially included in the Golden Ring of Russia and therefore, unfortunately, it is not possible to enjoy the architectural monuments alone. So, it is worth booking a hotel room in advance. We were lucky because having decided to go to the Yaroslavl Region to take part in the Balloon Festival at the weekend, we started calling hotels in search of a room only in the middle of the week and we managed to get the only remaining room as the hotel was fully booked. A few words about the festival will be a little later. 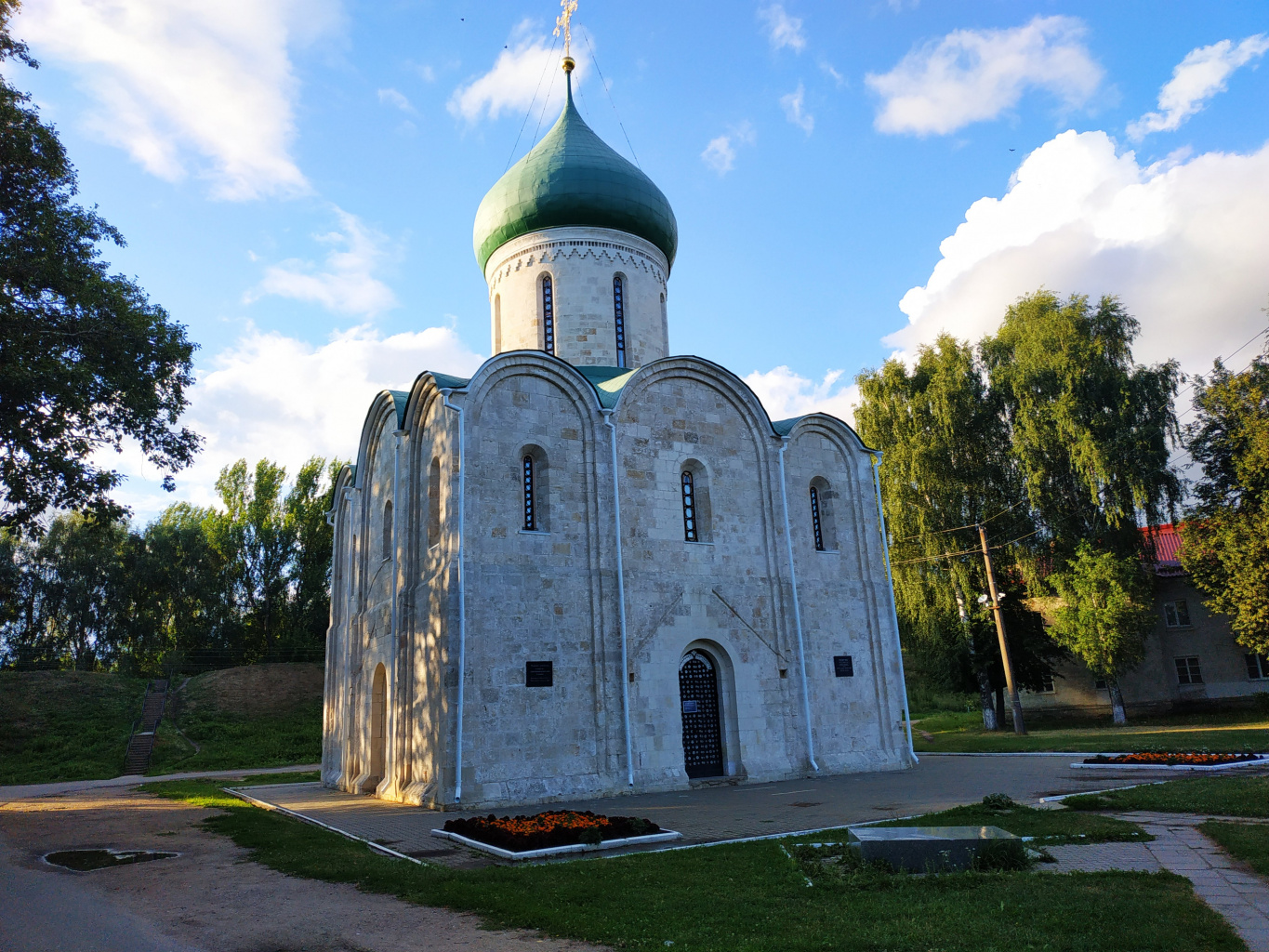 Pereslavl-Zalessky is closely connected with two great names of history. The first is Prince Yuri Dolgoruky, the founder of the town, who started the construction of the Cathedral of the Transfiguration on the banks of the Trubezh River in 1152. By the way, the second historical figure, the great Russian military leader Alexander Nevsky, was baptized in this Cathedral. The Cathedral with a monument to this combat leader is on your left when you come to the town and pass the Valovoye Koltso (The Bulwark Ring) street. The bulwark - although it is old - still is 10 to 12 metres high and over 2 kilometres long and surrounds the Kremlin with its Transfiguration Cathedral and three churches of Metropolitan Pyotr and Alexander Nevsky. The first of the churches has been under restoration for a long time, but from the outside, it is also an interesting monument of hipped-roof architecture as the church is crowned with sloping roofs in the form of a hipped roof instead of a dome.

However, the churches and monasteries are not the only attractions in Pereslavl-Zalessky. Those who are interested in the rural way of life can visit the Iron Museum located almost opposite the Kremlin. Up to 200 various irons - from small outdoor irons to huge ones weighing several kilogrammes. Some of the exhibits have funny inscriptions like “Do not drop on your feet”, the fence of the museum is decorated with similar funny inscriptions. The museum of teapots - “the irons’ competitors” is interesting, too, and the rural way of life can be seen at the museum of rural design. Children enjoy their visits to the Berendei House (Russian fairy tales: Berendei a magician turnskin becoming a brown bear), which specializes in interactive programmes and fabulous adventure games. 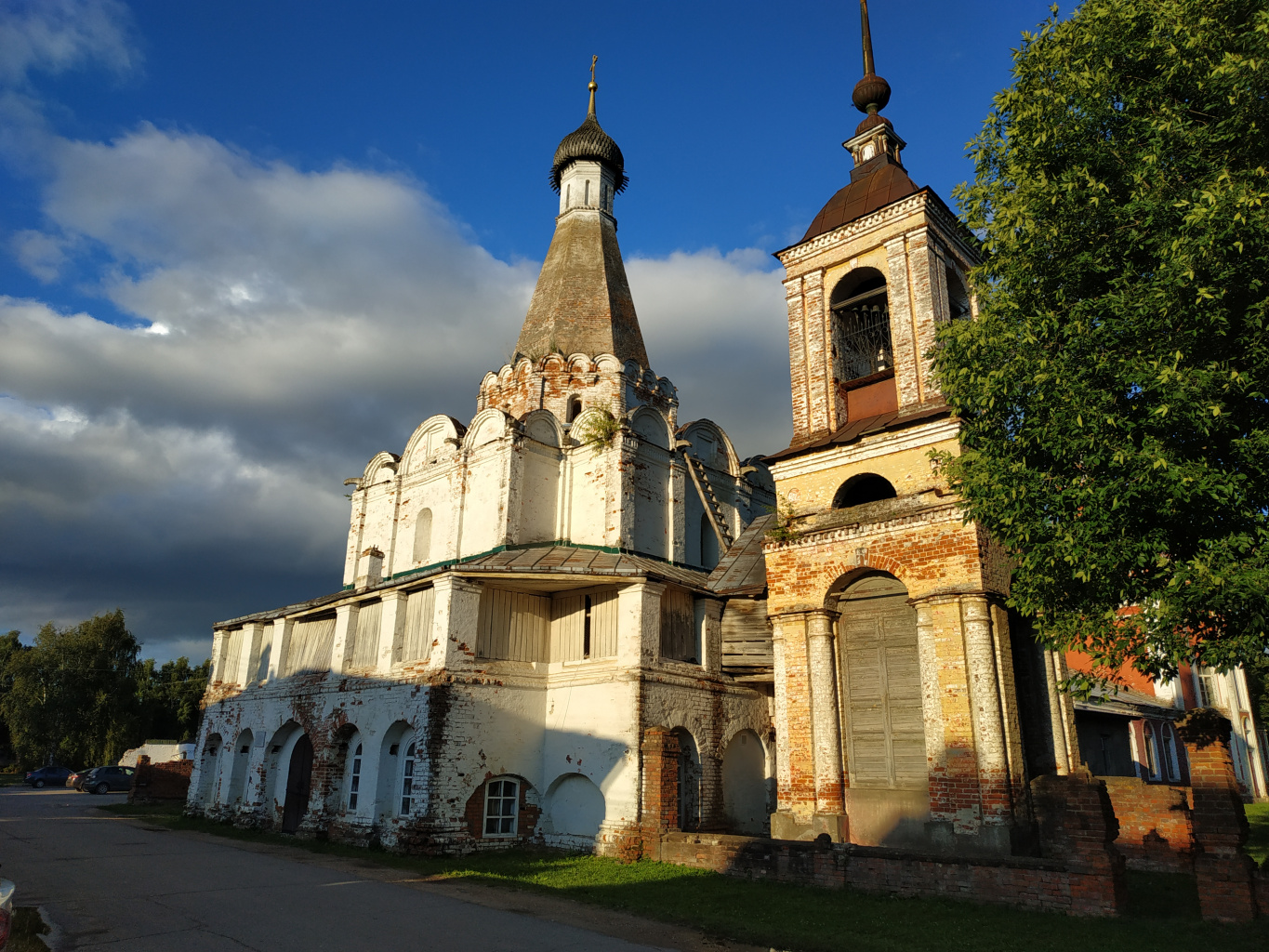 “The lore of ages long gone by, in hoar antiquity compounded”- recent and distant

I think that the only thing that needs more attention from the town authorities responsible for the tourist infrastructure is informing the tourists. There is a huge number of architectural monuments and many famous historical figures associated with Pereslavl-Zalessky, but very little information is available about them, any brief information could be given in an interesting form.

Not many many people know, for example, that Holy Hierarch Luke, Archbishop of the Crimea (his real name was Valentin Feliksovich Voino-Yasenetsky) worked as chief physician and surgeon at the former district hospital from 1910 to 1916. But it was Pereslavl-Zalessky that inspired him to choose his path of service of God.

Another story that may be of interest to old legend lovers is that Peter I chose Lake Pleshcheyevo as a place for his “toy” fleet not because of military or other considerations, but because he had fallen in love with Natasha Vizimkova, the daughter of an official of the Armoury; she put a lot of efforts and funds into arranging the Feodorovsky Monastery. Although there is no historical confirmation of the relationship between young Peter the Great and the young girl, the fact is that it was with the donations of the royal family that the monastery was extended and nicely decorated.

By the way, the “toy” fleet ended up miserably. The “toy” fleet, which included about a hundred ships of different classes, was kept on the shore of the Lake. And when Peter the Great at the age of 52, three years before his death, returned to the town, he found that almost all the ships were in a poor state of preservation. The tsar was in anger and wrote his “Decree to the Governors of Pereslavl” ordering him to protect the remaining ships. But after the emperor’s death in 1783, there was a big fire that destroyed most of the town and the Peter the Great’s ships. Survived by a miracle, there are still the remains of the ships, which were not transported to Pereslavl.

The famous boat of Peter the Great can also be seen as near the town, on the shore of the Lake, there is the Peter the Great’s manor house on one side of the road, and on the other side, there is a recreation and restaurant complex with a beach and the magnificent view of the Lake. Of course, the travellers can relax, breath in the healing air of the old Russian province, and also swim in the Lake. 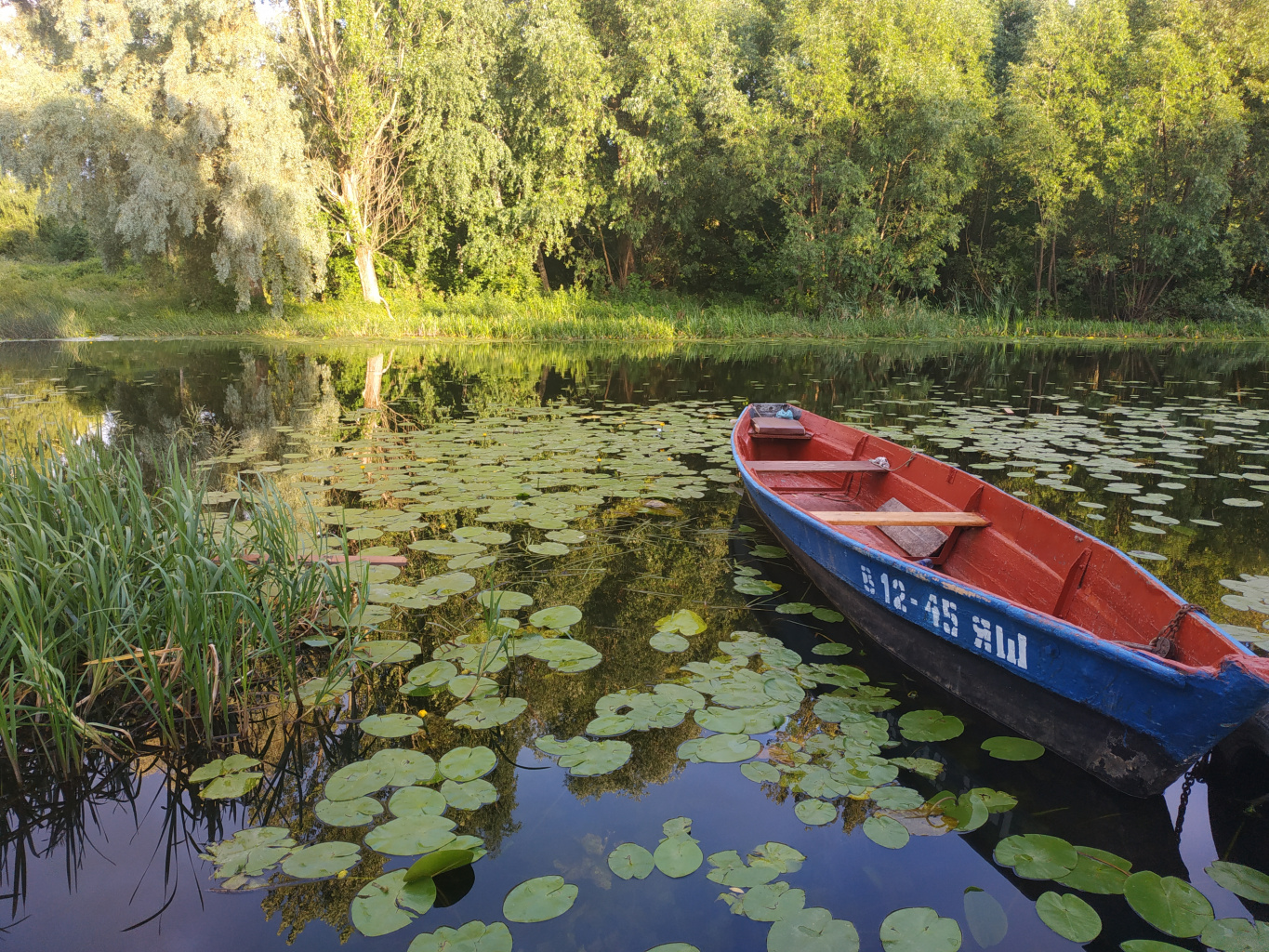 By the way, the tourists can enjoy the famous vendace, an endemic fish found only in Lake Pleshcheyevo. This fish was so popular in old times that it was supplied to His Imperial Majesty Court and it was called the “royal herring”! Today, the Pereslavl vendace is in the Red Book of Russia and the Yaroslavl Region, it is depicted on the coat of arms and the flag of the town, but you can still enjoy it, despite its status. Although, we must admit that this speciality is not cheap - 300 g of cold-smoked fish cost at least 250 roubles. But it’s worth it!