Light, water and the pipes 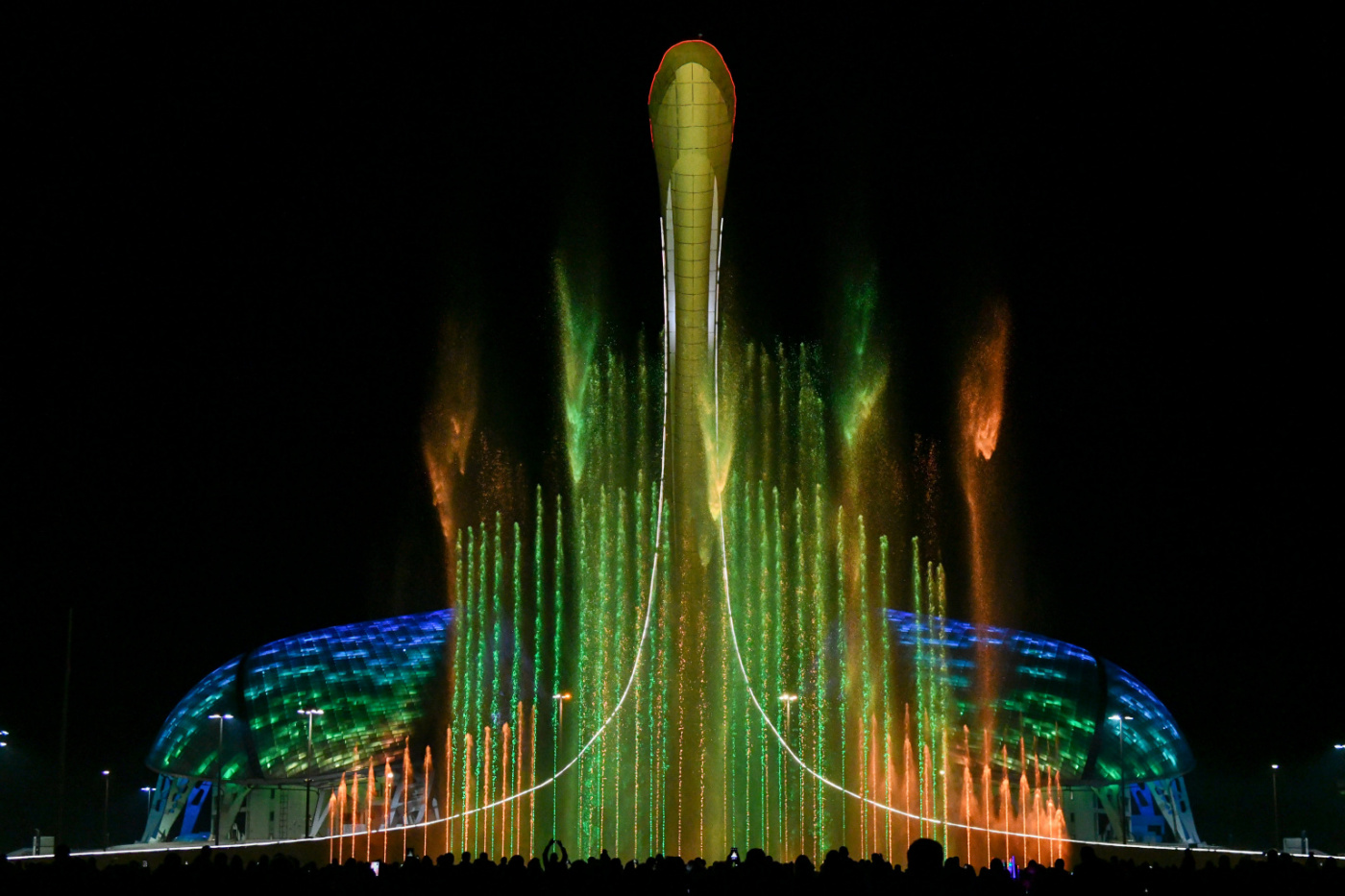 Igor Sizov
Special correspondent, EcoTourism Expert
05-19-2022
In 2014, it had a bright flame and the strongest athletes of the world gathered near it. Today, it looks beautiful with its jets of water and attracts hundreds of thousands of visitors. The talk is about the 2014 Winter Olympics torch. Now, it is the famous “singing” fountain of the Sochi Olympic Park. Created for one and a half billion roubles, it has become one of the most popular attractions of the Resort.

Every day, you can see “water dances” here, a special fountain show. And while the tourists are looking at the waltzing jets of water going high to the sky and radiating all the colours of the rainbow, our correspondent went down underground. It is there that all the secrets of the famous Olympic fountain are kept.

Today, as in 2014, almost every day, crowds of tourists gather near the fountain on the Sochi Medals Plaza in the Sochi Olympic Park to watch a unique musical show of water and light. 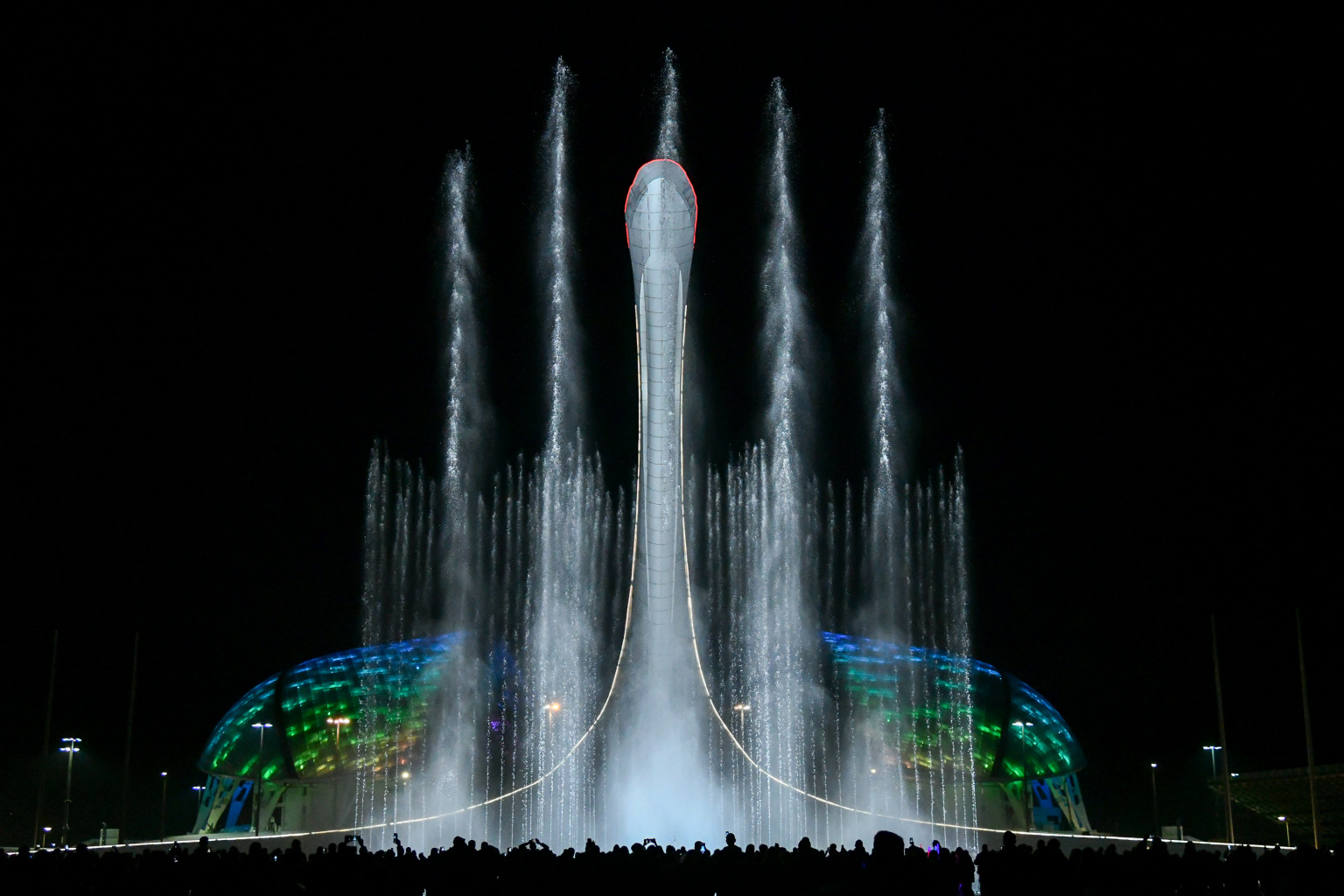 “Our fountain has its own programme,” says Hans-Joachim Frey, Artistic Director of the Talent and Success Foundation. It has been prepared for three years. We use different music for each day of the week: Viennese waltzes, Latin American melodies, Russian songs, jazz compositions, performances by world-famous pop stars. Thus, the visitors themselves can choose what to listen to and when to come.

In total, about 200 musical compositions sound at the fountain, each has its own show of water and light. The whole complex system is controlled literally from underground. In a huge room located right under the fountain, there is a large complex mechanism. Our tour is guided by Rustam Zhirov, Deputy General Director of the Geron company that operates and maintains the Olympic fountain. We go down the stairs and find ourselves in the control room. 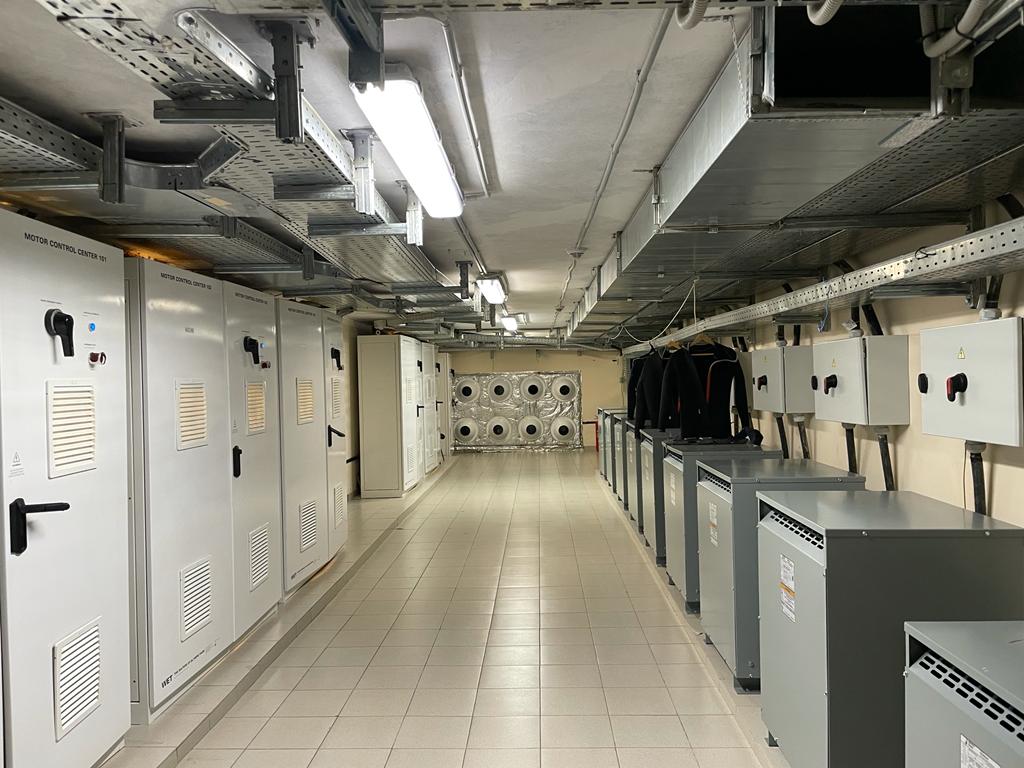 “All systems are controlled from here,” Rustam Zhirov shows the screens on the walls of the room. “They are checked before each launch, and the fountain is turned on after the diagnostics only. And there is something to check here. The diameter of the fountain is 75 metres, the capacity of the bowl is 3.5 thousand tonnes of water, it is three metres deep.” 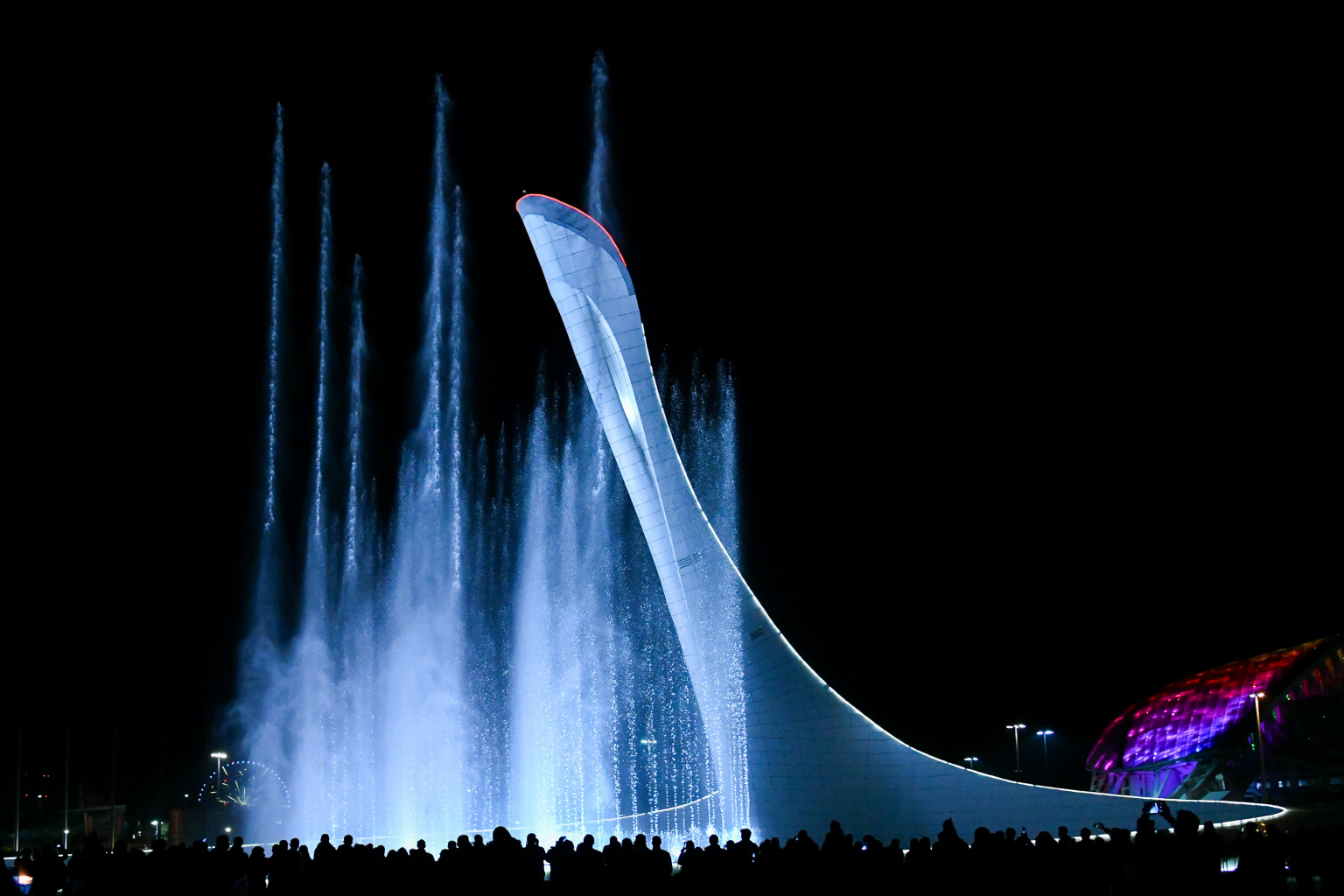 These software programmes are used now to develop a spectacular musical fairy show of light and water. The first one (the so-called “player”) launches and carries on the show. The second software programme is the “editor”, in which this show is created. The third one is a “3D visualizer” that allows to run the entire programme on the visualizer without turning the fountain on and to remove “bugs” without the need to run the equipment once again.

A slim girl Tamara Kuzina is at the remote control in front of her computer with charts. She is a hydroplastic artist.

“First, I choose the music, then I select the pattern for it, the movements of water and light,” Tamara clicks the “mouse”. “I use 12 robots that create sheafs of water moving along three axes, there are 246 water ‘canons” to make water jets. There are also six water “hyper-cannons” producing 80-m high jets. For the play of light, I launch strobe lights or fog. Everything depends on the music.

Each musical composition lasts 3.5 minutes on average. Previously, it took Tamara about a month to create one “water dance”. Now, it takes two weeks only. To recreate the show on the water and express what the composer wanted to express, the girl gets her inspiration while watching films or ballets where this music sounds.

“When I was working on the musical composition from the “Schindler’s List” film, I watched the movie, got inspired and tried to express all the pain through the dark blue and red colours on the water,” recalls Tamara.

Pushing the water up

Another unique feature of the fountain is in its technology: the water in it, unlike others, moves not due to its own pressure, but due to the air pressure. At each moment of time, the air flow lifts up about 10 tonnes of water. The system of compressed air, which enters through the air duct under a pressure of eight atmospheres, helps carry out this. The experts call a room with four compressors (90 kilowatts each) the “lungs” of the fountain. For comparison, 60 kilowatts are required to provide lighting for a four-entrance five-storied apartment building. The “brain” of the fountain is the server room where there are control panels controlling the light, music and other mechanisms: 36 loudspeakers and two thousand light devices.

“Maintenance work on the fountain is going regularly,” Rustam Zhirov tries to shout over the noise of the compressors. “For example, water changing is carried out once a month and lasts five days. It takes a whole day to drain 3.5 thousand cubic metres of water. After that, several workers in wetsuits clean the fountain bowl, replace parts and fill it with water again. If such work is not carried out, the dust or debris from the water can enter the compressors and they can be damaged. And each of them costs a huge sum of money.” 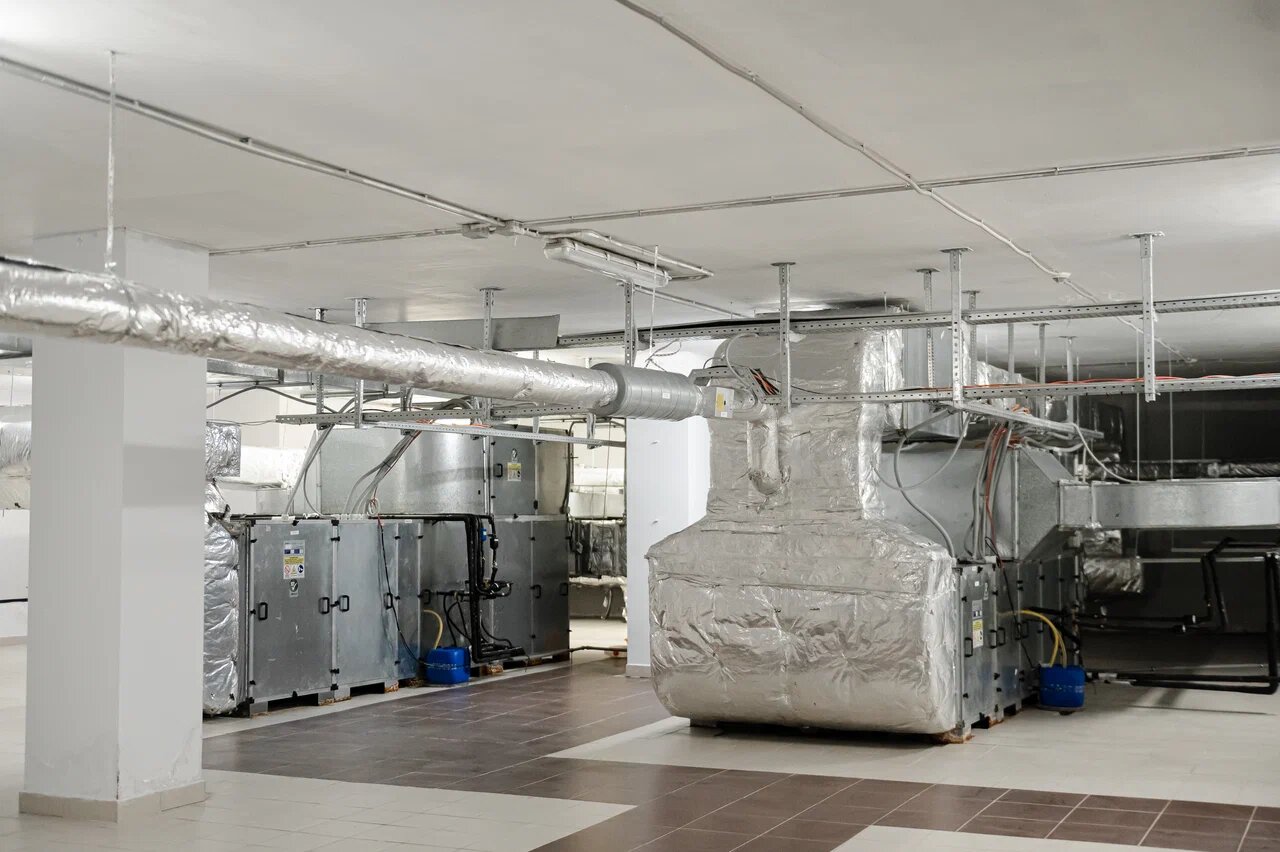 In addition, there are routine procedures that do not involve water, such as changing the oil in compressors. Today, 15 people are working to maintain the fountain, including mechanics, low voltage workers, software programmers, a welder, specialists in the compressed air system. Thanks to the work of all the specialists that is not seen to the visitors, thousands of tourists from all over the world can enjoy the amazing show of water, music, and light all year round.