Journey into the past: the Port of Baikal
News
Exclusive
Expert Reports
Blogs

Journey into the past: the Port of Baikal 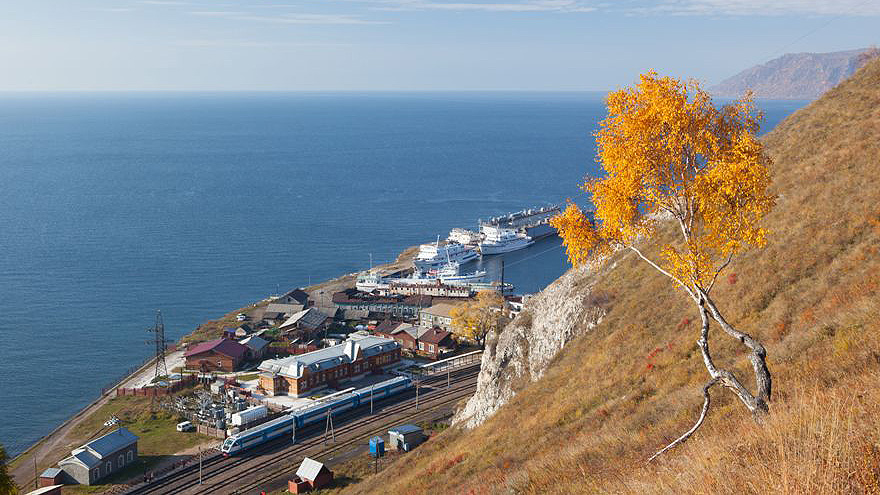 You need to come to the Port of Baikal just to see this place. Such a plain idea and confidence that this is an ideal place to start our acquaintance with the great Lake Baikal came after returning from another trip.

It seems like everything was frozen in time here: on the one hand, you see the endless smooth water surface, on the other hand, there is an old village, the inhabitants of which are in no hurry. Even the dogs here are sedate like cats, no one disturbs the spirit of Lake Baikal.

The noisy Listvyanka (Larch Tree) Village is visible from the shore, which creates an even greater contrast. Arriving at the Port of Baikal, you find yourself in the past. It seems that you are about to see a road cart or a lady in a hat and with a parasol like in the days of Admiral Kolchak.

If you want to make a journey by the Circum-Baikal Railway, it is better to choose a route with the train starting from the Baikal Station. But, having come here for the first time, you don’t feel like going anywhere at all, you just want to sit for hours on the shore in silence or just have a walk. There are special tours for those who want to see the Port and the Village, but most of the tours include a trip by the Circum-Baikal Railway. Therefore, we decided to get there on our own.

The cargo-passenger port is at the source of the Angara River. The Port, like the village, lives its own slow-paced life. The ships stay here for weeks, except that in the summer, the boats with tourists come and go. Once, this Port was of national importance. Now, you can see old disused ships here, they can be clearly seen from the ferry, but it is better to get closer - it seems that you are at a filming set factory. Today, you can also see high-end cruise ships in the harbour that stay here for the winter time. It is interesting to see them close to the sunken barges.

By the way, there are not only ships in this Port. The Baikal Railway Station was once of great importance for the economy as well. It connected the Circum-Baikal Railway with Irkutsk. Later, the branch railway line was flooded during the construction of the Irkutsk Hydro Power Station. The Station is operational today, but trains do not come often, not even every day. In addition to tourist trains, a “motanya” (local name: a type of commuter train) runs on the Circum-Baikal Railway once a week. 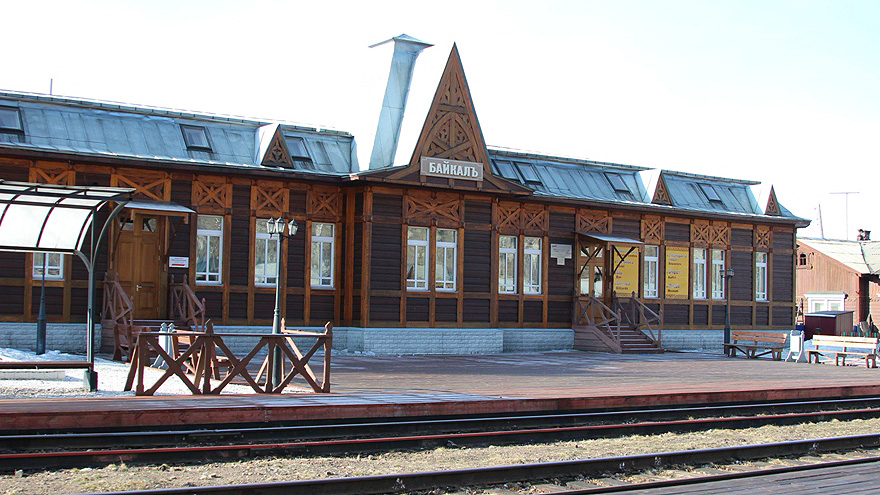 We go to the Baikal Railway Station, the architecture of the restored wooden station and the platform decorated in a retro style, are worthy of your attention. In the building of the Station, there is a Museum of the Circum-Baikal Railway Construction with a very good exposition. A Museum guide told us about the history of one of the most beautiful railway lines and about other attractions of the Port of Baikal.

Two of them are located not far from the Station - the Stone Pumping Station and a “Lebedyanka” Steam Train. The train was designed during the Great Patriotic War but was manufactured in the early 1950s. The people named the steam locomotive after its designer Lev Lebedyansky, but the train’s official name was “Victory” (after all, it is useful to visit museums). This locomotive is a modern landmark of the Port of Baikal; travellers from all over the world have pictures made on its background. The same type of the restored steam locomotives run on the Circum-Baikal Railway. These are the retro-trains carrying tourists by the Circum-Baikal Railway.

In the same Museum, we got to know that once, the land plots were allocated to writers, artists, and publishers in this village. It turns out that there are ‘dachas’ (summer houses) belonging to the writers Valentin Rasputin, Anatoly Anosov, Sergei Ioffe, Gleb Pakulov, and others. The history of this village is connected with the play writer Alexander Vampilov. There is even a new tour route in these places – “Baikal Peredelkino”. But we did not manage to get there as it is necessary to book a tour in advance in Irkutsk at the Rasputin Museum.

We were not upset and decided to get a bird’s-eye view of the village. To do this, we climbed to the Cape Baranchuk. A special staircase was made for tourists, along which one can easily climb up the mountain, and signs showing the way to the sights were also made there. But there is another way - a steep goat trail (of course, we recommend it), which offers a stunning view of Lake Baikal.

On the mountain, the Church of the Transfiguration was built not visible from below. It was built in the 21st century but you can’t tell it right away - the Church harmoniously associates to its setting - the old village. 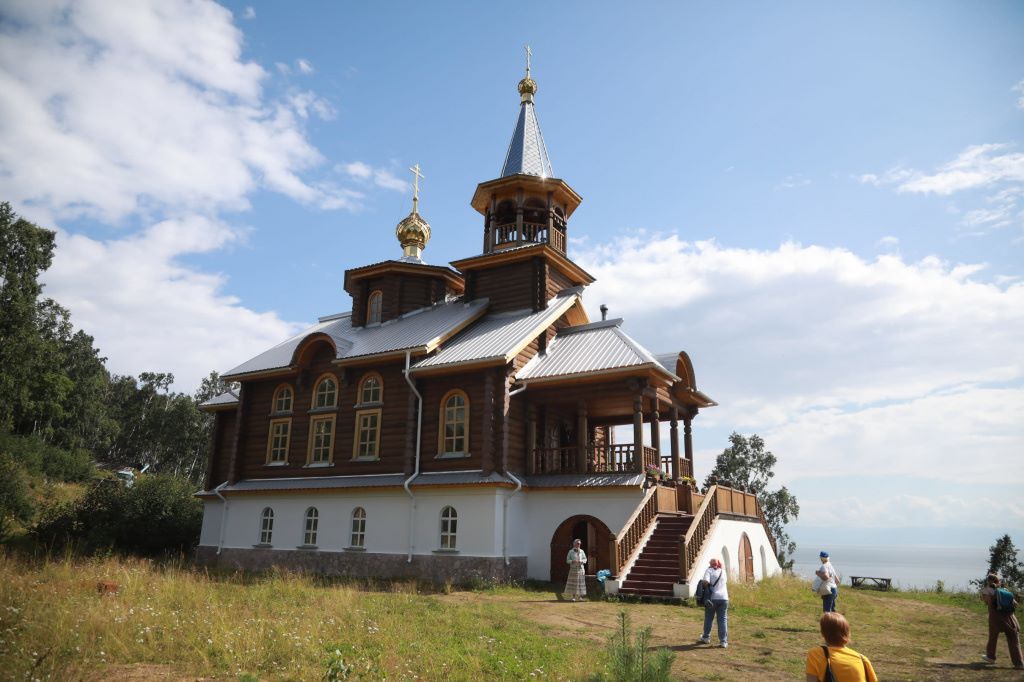 Again, on the advice of the Museum guide, we went to see the old lighthouse. Since the beginning of the 20th century, it has been on the top of the mountain, and earlier, it was located a little bit lower. It was made either in England or in France. Its history is not very clear, the scientists are still arguing. It is a pity that the lighthouse is not used now and the tourists are not allowed inside it. They say, there is a spiral staircase in the lighthouse; the lighthouse fell into decay. Well, the Eiffel Tower went through hard times, too.

It is definitely worth climbing up the mountain, as right behind the old lighthouse, you can enjoy the stunning view of Lake Baikal. The tourists normally stay longer here as they cannot take their eyes off. Sometimes, it can be windy, but it is nice to feel the legendary Baikal winds.

From the Stone of Desires viewing deck, an amazing view of the Port of Baikal, the houses of the Baikal Village, the Circum-Baikal Railway, the embankment of the noisy Listvyanka Village, and the Chersky Peak opens up. The Stone of Desires itself (it is also called the Stone of Lovers) is also there. But there is no queue of those who want to sit on it (again, we remember our favourite Listvyanka Village and the crowds of tourists at the Chersky Peak).

Still, the sunset on Lake Baikal is unbeatable. The main thing is not to sit too long as it takes some time to go downhill not to miss the last ferry boat in the evening. Although, you can be late “by chance” and stay here overnight to meet the sunrise in the morning on the shore of the deepest Lake Baikal. It is better to stop right at a small hotel at the station.

Nowadays, much is said about the lack of infrastructure, that the Port of Baikal is unattractive for tourists. But the project for the development of the Baikal Village has been already developed. Soon, the station square, the embankment will be renovated, the viewing decks will be built, and the tourist trails will be improved. Probably, the old lighthouse on the mountain will be opened for tourists. You can imagine public spaces, souvenir shops and restaurants with a stunning view of the Port. Even the Baikal Water Bottling Factory is going to make tours of the factory next year.

The Port of Baikal will become more beautiful, it will be able to receive guests from all over the world. But, to be honest, we are glad that we managed to see it in its current state, so different from its closest neighbour - the Listvyanka Village. Still, we missed the ferry boat that evening.