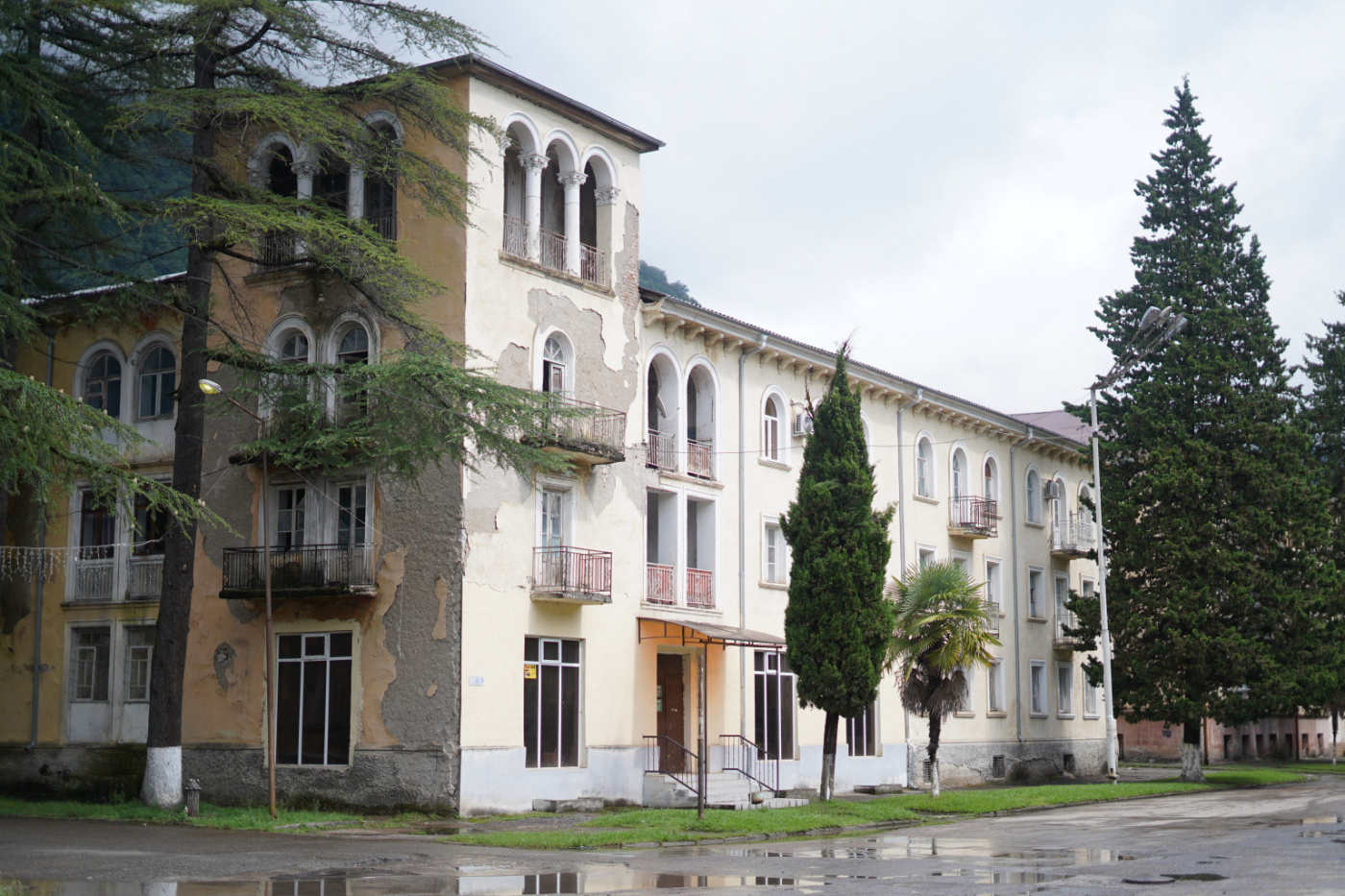 Abkhazia. Gagra. Pitsunda. Sukhum. All these places have long been loved by tourists. The unknown town of Tkuarchal called “dead” in social media has recently been added to them. It is the town that became a Hero.

Tkuarchal met us with a dark sky. Thunderclouds were hanging over the railway station building made of red bricks, with majestic columns. The name of the town was written in the Russian and Abkhazian languages. Only some marks remained from its name in Georgian. The old railway tracks were grassed over. The spacious waiting rooms were full of former luxury. Many years ago, the trains arrived here from all over the Soviet Union. 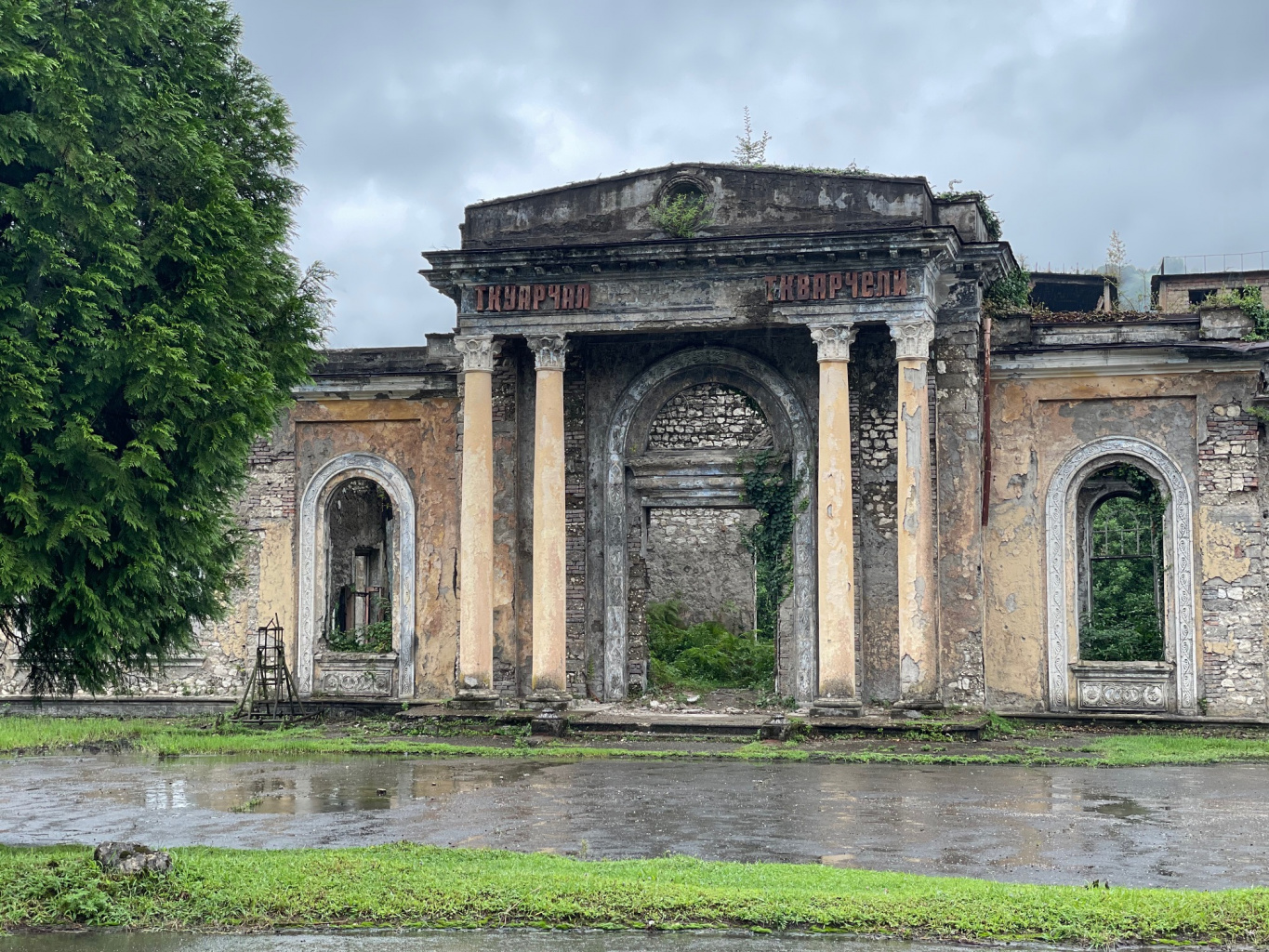 In the 1920s, large deposits of coal and dolomite stone were discovered in the surrounding mountains. The importance of mining deposits increased during the Great Patriotic War. Donbass was captured by the Nazis, and the coal from Tkuarchal was sent to the metallurgical plants for the production of steel for manufacturing aircraft, tanks and guns. After the victory, Tkuarchal turned into a beautiful town. Captured German specialists - architects, engineers, builders - took part in its construction, and the houses were with columns in the Stalinist Empire style. A unique bridge was built with a turn over a mountain gorge and the avenues were wide. People came to work here from all over the Soviet Union. In the 1950-1980s, the population of Tkuarchal and the neighbouring villages of Akarmara and Dzhantukh reached 60,000 people, up to 20 thousand tonnes of coal were produced per day at eight mines working here. A clothing factory was built as well as the Zarya factory manufacturing the parts for the Leningrad-based military factories. A large power plant was built to provide enterprises with electricity, and a highway and a branch railway line were laid to the mountain town. 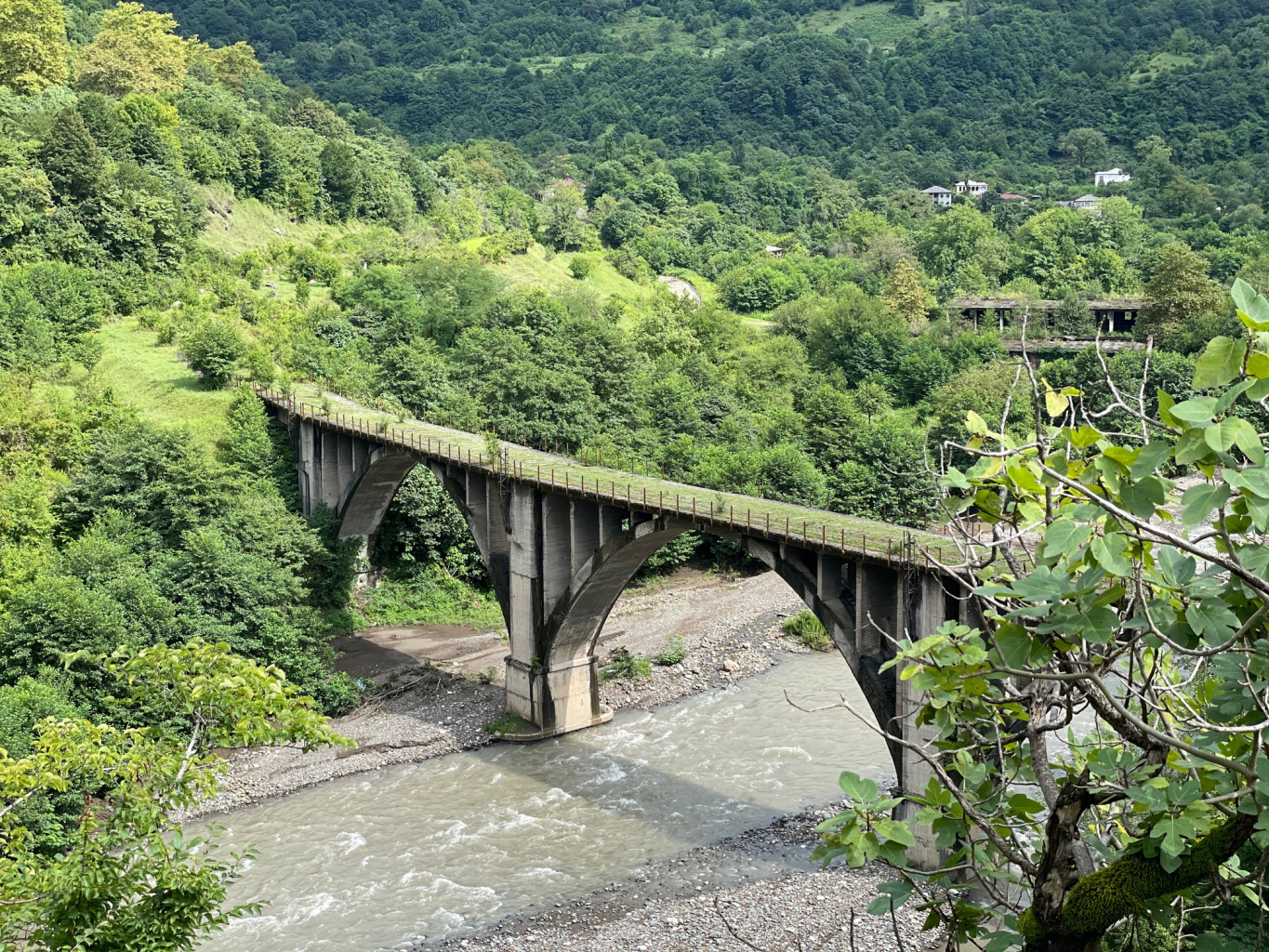 The fate of the “town of miners” in the Caucasus Mountains changed in the early 1990s when the Soviet Union collapsed and the Georgian-Abkhazian war broke out. Tkuarchal was in the blockade when the Mkhedrioni armed bandits blocked all the roads leading here, destroyed the power plant using rockets, and there was no power supply in the houses for more than a year.

“When the war began, I was 12 years old. I swam in the river and saw adults running. It was hard as there was no power, cast-iron wood stoves were used, that is why all the trees in the surrounding forest were without branches. There was not enough food; the bread and butter from humanitarian supplies tasted like a chocolate bar for me. The authorities wanted to surrender the town, but the residents said “As long as the last woman and child are alive, we will not give it up.” Therefore, our town is a Hero,” said Eduard, our guide, taking us through Tkuarchal.

In the winter of 1992-1993, several thousand people died of malnutrition during the blockade. Those who had the opportunity to leave the town got out with the humanitarian convoys. Once a helicopter with refugees was shot down, and 64 people were killed. During the war, the population of Tkuarchal decreased almost by 15 times, from 60,000 people to four only. 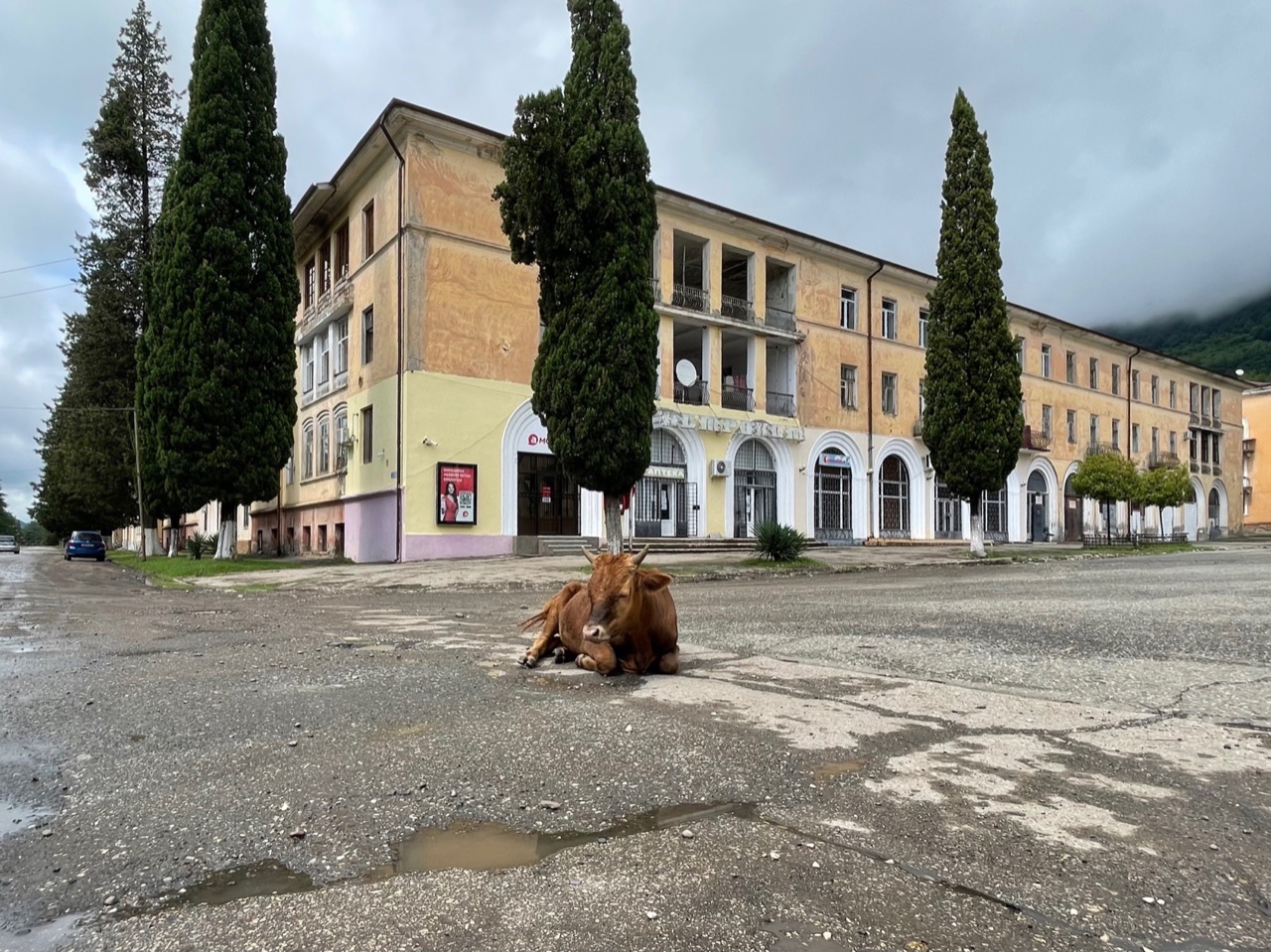 Eduard drove us around the town. We saw wide avenues surrounded by houses in the Stalinist Empire style, a lazy cow on the main street of the town, and a half-ruined five-storied building with the sign “Shakhtar” still on it. Among the empty and broken windows, we saw a balcony with flowers - somebody lived in this apartment.

“Several families live now in the apartment buildings. But nobody occupies other people’s apartments as they also have owners. They will return someday,” explained Eduard.

After the war, he served in the army of Abkhazia and was a border guard. After 2008, when Russia recognized the “Land of Soul”, he left for Tula to stay with his relatives, and helped to cope with the roadside business. He got married and returned to Tkuarchal with his wife. 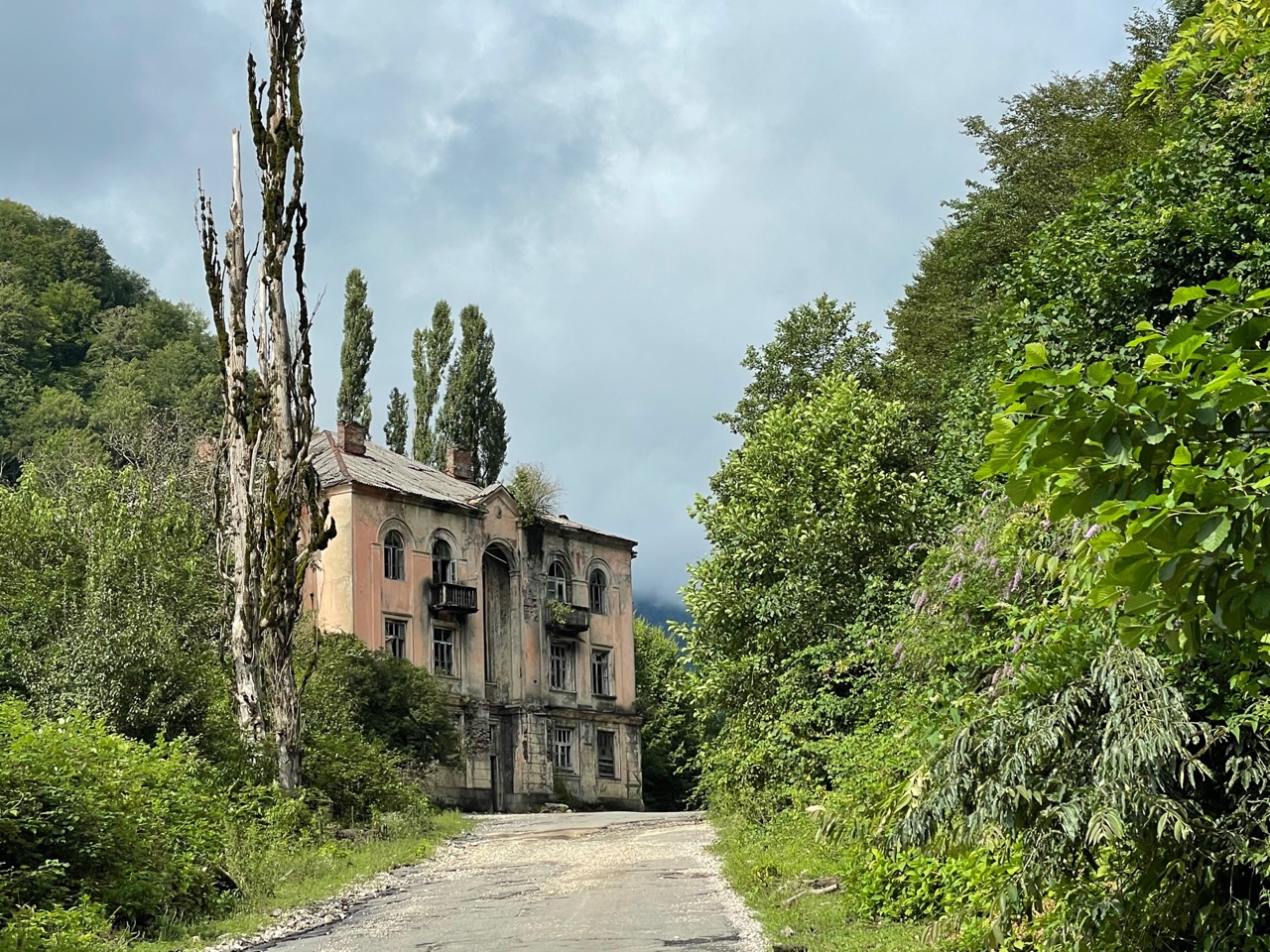 “It’s good here, in this nature, at home. However, there are practically no jobs in the town. Most people leave for Sukhum or Gagra to find some work. I work as a teacher at school and I am also engaged in farming - I keep cows. All my family takes care of the animals, and my mother sells milk in the market. We can earn for living,” told Eduard. 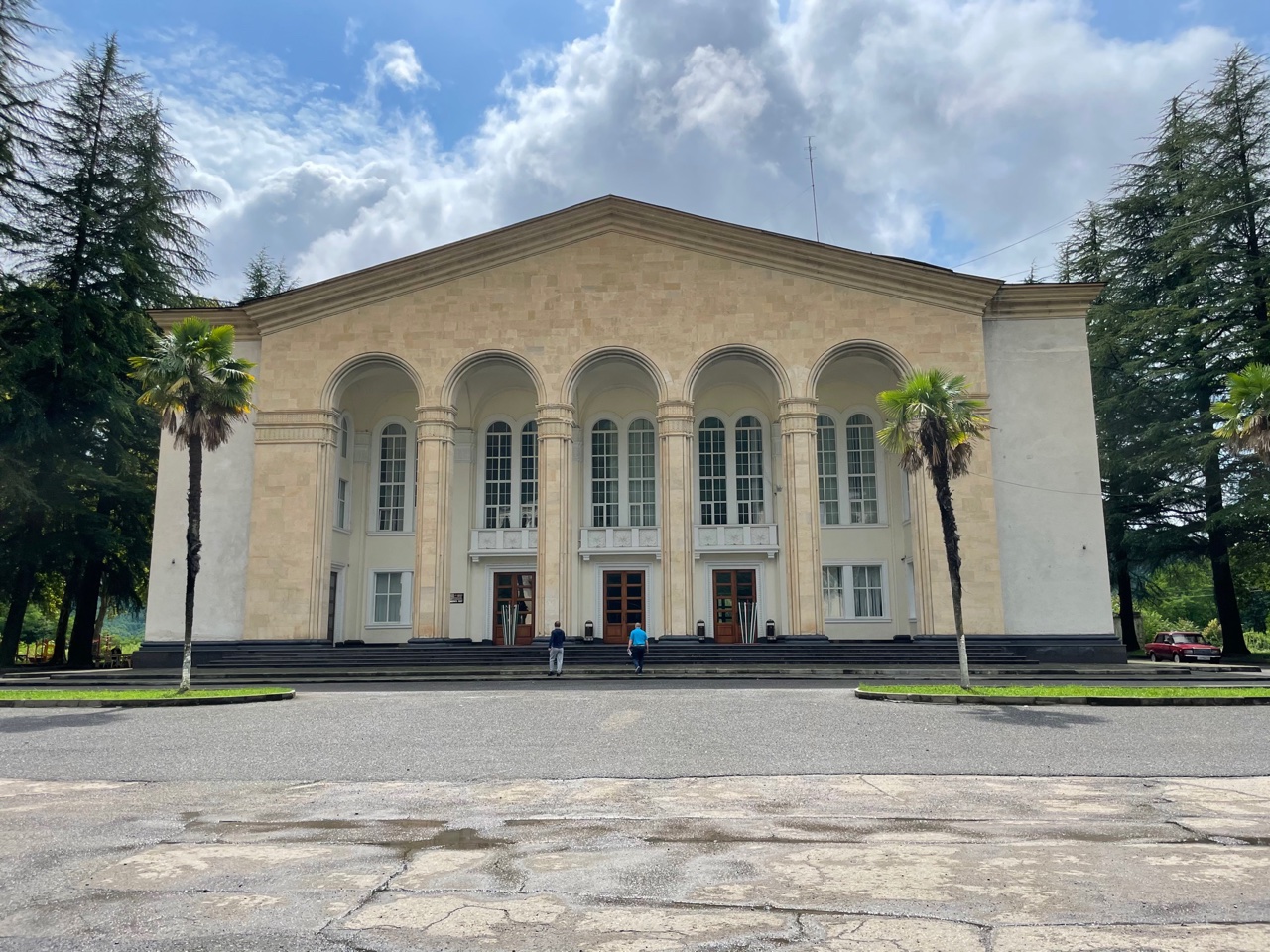 Tkuarchal is gradually recovering. We saw several schools in the town and a renovated kindergarten. In the renovated House of Culture, the Comedy Theater gives performances. There are bright playgrounds among the destroyed houses and a new sports school. A modern hospital will be opened soon.

“There was a market there, and here is the dance floor. This is a garment factory; a hotel and a supermarket are here,” Eduard pointed to the destroyed buildings at the entrance to Akarmara, a small town within half an hour’s drive from Tkuarchal.

There was a small stall at the entrance to the town selling honey and wine. Nearby, the owners of UAZ off-road vehicles stood ready to take tourists to the highest waterfalls in Abkhazia. Today, tourism is the only business in Tkuarchal and its surroundings to earn money for living. 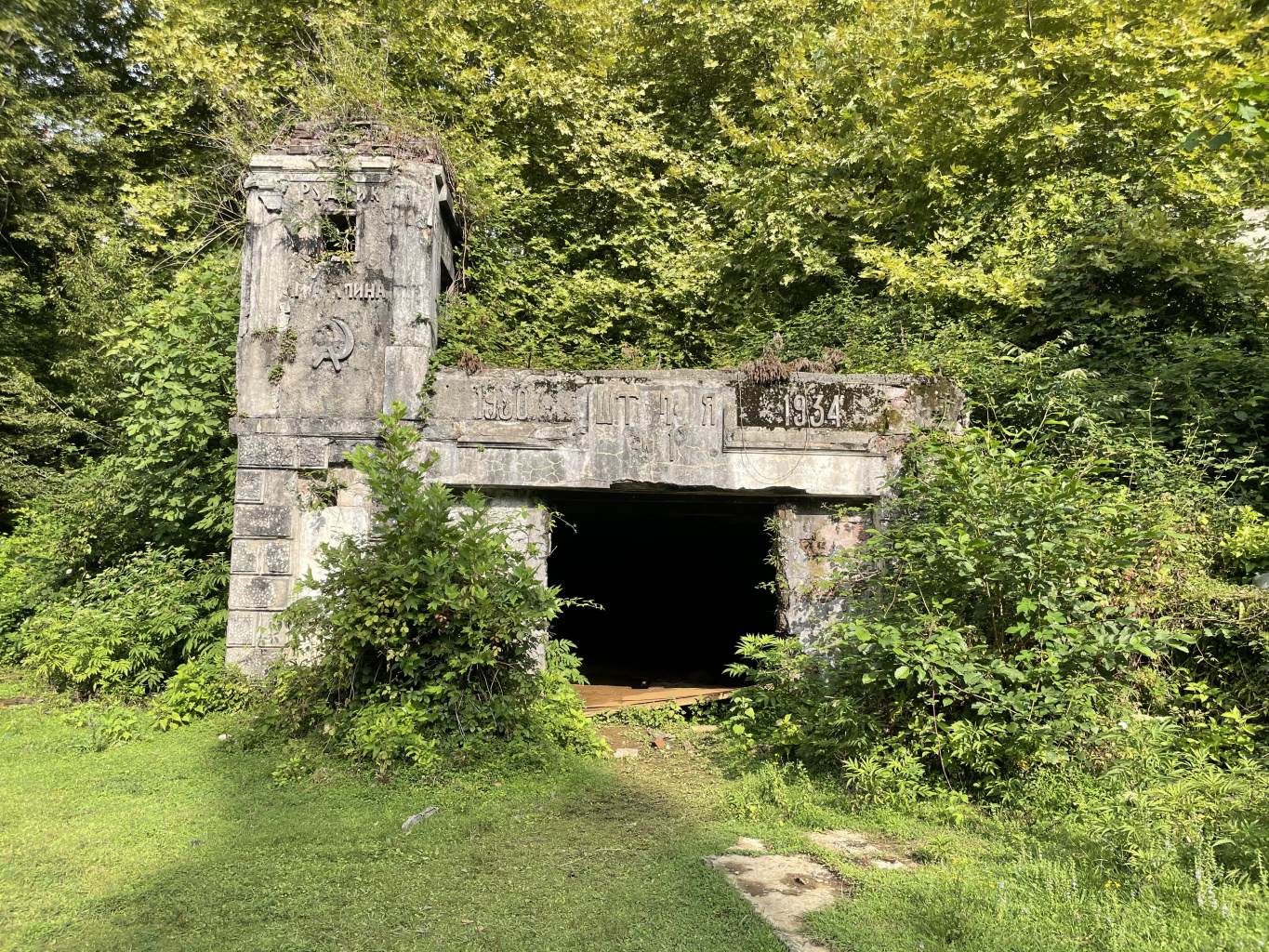 “Someone wrote that our town was a “Ghost town”. So, the tourists started coming. They came to our house once and I asked them “What are you looking for?” “Ghosts?” they answered. “So, here I am,” I answered. “They gave a shrug of the shoulders,” said Nina Alekseyevna living in Akarmara.

Nina Alekseyevna is Russian, her parents came to work in the mining town of Abkhazia long ago. Nina was born here and she worked as a primary school teacher all her life. She survived the blockade.

“Well, that year was a fruitful one, we had many fruits. We made flour from chestnuts and oil from Oriental plane trees. There was nowhere to go. There’s no place like home,” explained Nina Alekseyevna.

Today, in the house with 40 apartments, where she lives, there are only seven families. This is the most densely populated house in Akarmara. After the war, only 150 people remained in the village where 30 thousand people lived earlier.

“We had eight mines, they were not shaft mines, but went deep into the mountains. It was easier to work at these mines, so people came here from all over the country. And now it’s the other way around. My children went to the coastal city to get some work. There are no jobs here. I receive my pension from Russia,” said Nina Alekseyevna.

We came to an abandoned mine. Its entrance looked more like a portal to Narnia. Concrete “hammer and sickle” were seen behind the dense vines. Nobody has any hopes for the recovery of coal mining. 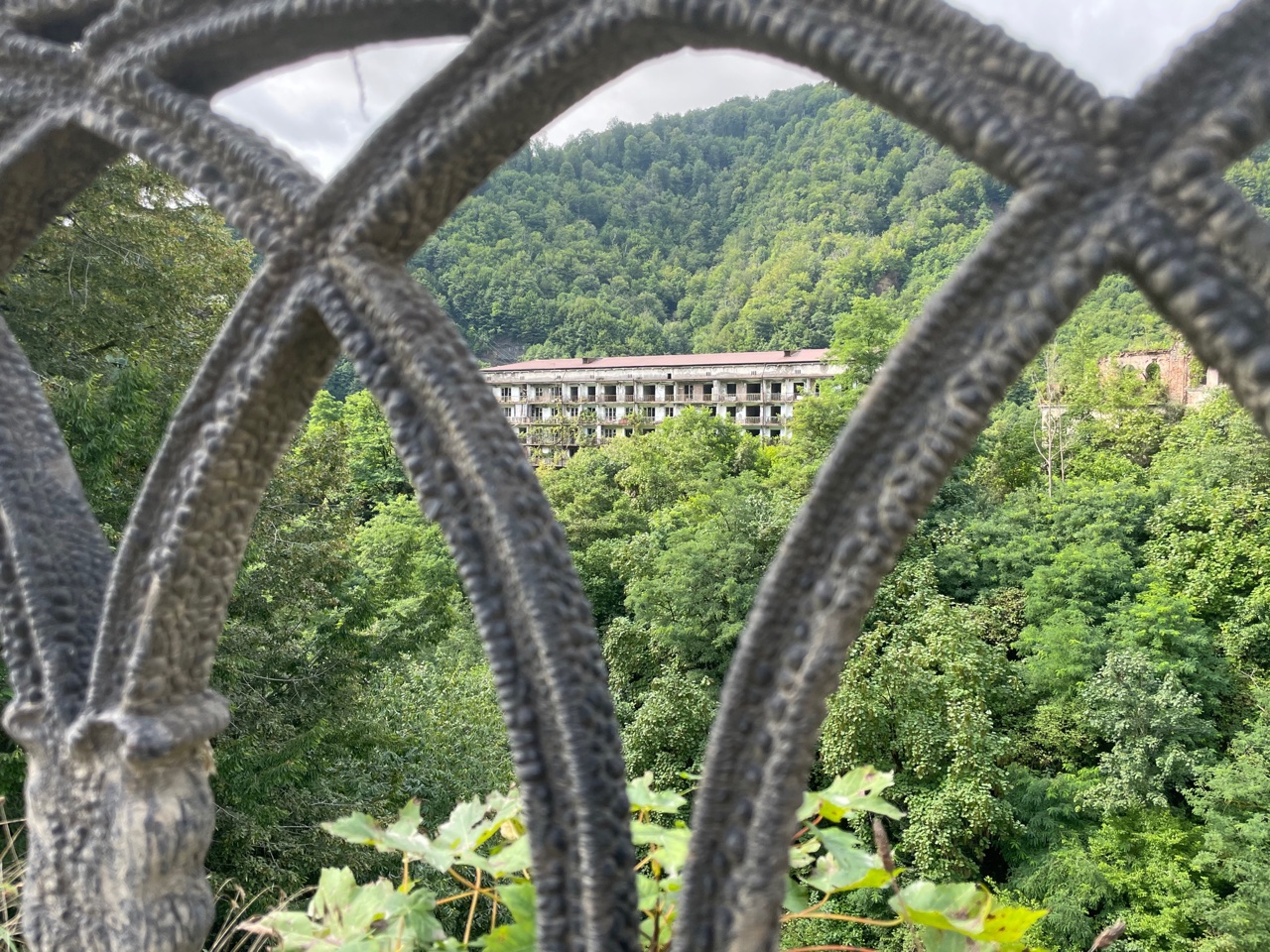 “During the year without power when the town was strangled by the blockade, a lot of methane gas accumulated in the mines. To revive the mines, very large investments are required, so, this is almost unrealistic. Therefore, we hope to develop tourism. Already now, 100-150 guests a day come to the town. There is no hotel yet, but a holiday inn was built near the Radon Springs, and a guest house was opened,” added our guide.

You can try local cuisine in two patskhas (cafes). Soon, a new restaurant - “Lashkendar” - will be launched in Tkuarchal. The building of the legendary place was bombed during the war and the veterans restored it.

“First of all, the wives and children of those who died or became disabled during the war will work here,” - explained the veteran of the Abkhaz war Mavrik Komandirovich. The former police chief was one of the first to organize the militiamen. He tested the weapons, which they began to make at the factory in Tkuarchal. The artillery-type weapons were very simple as these were made using an ordinary pipe and a sheet of iron. During one of the tests, Mavrik had his arm shot away. After the war, he was awarded the order made at the same factory.

“I will not tell you everything now, but you will hear such news soon that everything will change. Everything will be fine with us. And please write about us so that everyone understands that Tkuarchal is not a “dead town’,” said Mavrik Komandirovich.

We were sitting in a patskha enjoying simple food with beans, bread, and red wine. A grape berry suddenly fell on a white sheet of my journalistic notebook. It seemed to put an end to the tragic fate of the “dead” town in the mountains of Abkhazia.

They did not let us leave Tkuarchal as long as some white wine remained at the patskha. We still had five hours to drive to Sochi. We went by car and the sun was breaking through the clouds with the warm rays shining bright to show the town restoring to life among the mountains. This is the Hero Town of Tkuarchal.