Anri Kanunov
The chairman of the public organization ‘FREERIGHT’ and the vice-president of the Russian Diving Federation
06-01-2020
# Crimea,Russia

Flying over the abyss

The Crimea is associated both with a beach vacation and also extreme recreation, especially for those who want to gain really rich experience during their vacations. The Crimean regional public organization ‘FREERIGHT’ gives the adrenaline addicts an adventure with the sauce of danger, but at the same time completely safe. Anri Kanunov, the chairman and the vice-president of the Russian Diving Federation tells how to make a sports organization a fascinating business that brings a steady income, and why it is necessary to set up sports and tourist facilities. 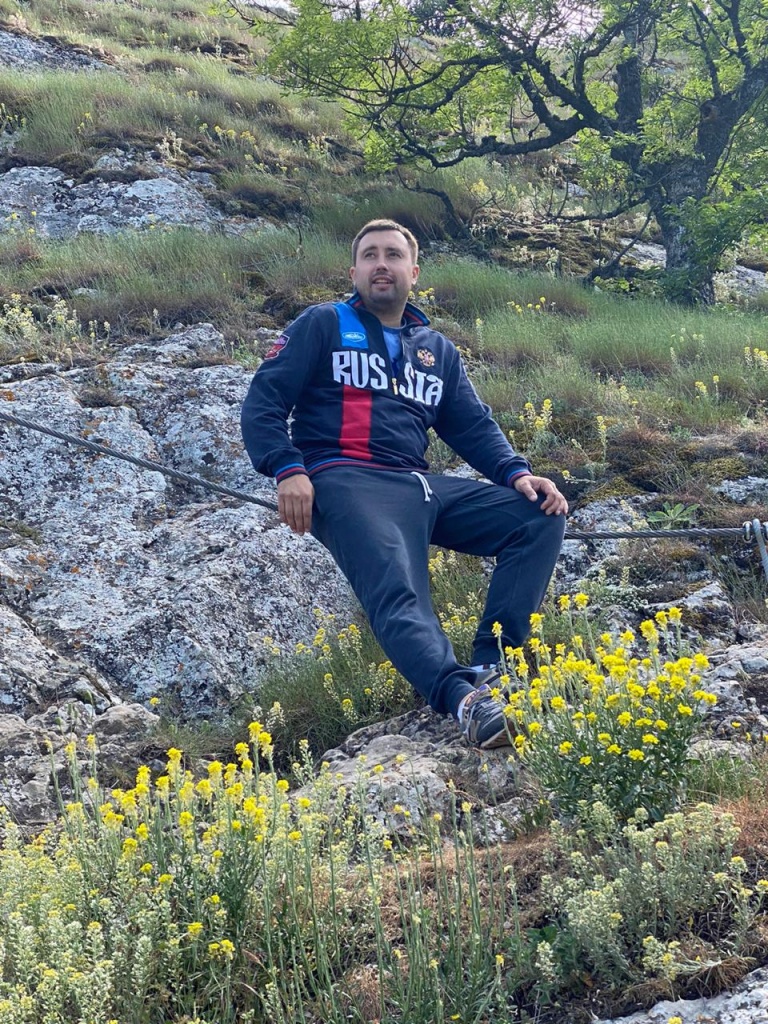 - We had a dream with friends-cyclists - to become world champions, like everyone else had in childhood. But how to do this as this was not a cheap sport: a good bicycle costed 7,000 euros, and a fair amount of money was also required for trips... Before the crisis of 2008, we had a team in the Crimea, we received our salaries, but later on, we had no sponsors and started to train at our own expense. And then, we run away with the idea of holding extreme sports events at home. We started with cycle-races and proceeded with cliff diving and then we realized that we should develop extreme tourism, because we went in for cliff diving and it was interesting to us, and finally, we launched the ‘FREERIGHT’ project. Its name is based on two English words – ‘freedom’ and ‘right’. We declare and help to exercise the rights and actualize the opportunities of people coming to the Crimea all year round, they can choose any sport and any type of their vacation, regardless of their age and social status. So, gradually, we went all the way from a simple desire to hold competitions to understanding the need to start our own business to be able to finance your hobby. And today, we have a clear understanding of the extreme active tourism development roadmap in the Peninsula, and we are also able to systematically develop this line of activity. We are engaged in the installation and maintenance of sports and tourist facilities, the construction of sports schools for children and training facilities in various sports, we support the Crimean athletes, and hold both local and international competitions.

- Professional sport differs from an extreme tourism. Is it so rewarding to bother with organizing sports events at the international level, maybe, it’s easier and more beneficial to just concentrate on receiving ‘welcome guests’ - thrill-seekers?

- In fact, attracting world-class athletes here who are not afraid of sanctions - and most extreme sports are not included in the Olympic Games list and are not subject to the instructions ‘from above’ - is a direct way to break through all barriers and bans. In the Crimea, the conditions are just perfect, championships can be held here, but no one has done this before. We tried - and we did it! Now, world-famous stars come to our annual championships. On August 10 last year, in the Crimea Cliff Diving World Cup in Simeiz (diving from a 27-metre platform), 14 cliff divers from all over the world took part, including the divers from Great Britain, the USA, Czech Republic, Italy, Brazil, Mexico, Colombia, Ukraine. Artyom Silchenko, a two-time world champion in high diving and cliff diving, said then that in the near future, he was going to make an exhibition dive from the 35-metre high Crimean Bridge. During the construction of the bridge, we were even ‘forbidden’ to think of such a ‘crazy’ idea. But, I think, Artyom will surely make his dive, we will be able to make arrangements with the operator of this grand bridge thanks to our friendly relationship with the Crimean government, and it will be a unique show. By the way, Silchenko can do it together with Gary Hunt, a UK cliff diver. He really liked the idea, they have already constructed a ‘friendship dive’ scenario: Artyom and Gary simultaneously dive in opposite directions from the Crimean Bridge.

And one more thing, the Crimea will become the first region where a movable modular diving tower will be installed for holding world competitions in high-board diving. The designing and manufacturing of the unique structure - the world's first modular high-diving tower - have already been completed, it is ready to be used. I want to note that everything is done on our own, we have already become a full-cycle company and do not need a third-party experts’ advice and outsourced manufacturers. The diving tower will have two platforms - the top platform maximum height is 33.5 metres, the lower one is at a height of 20 metres and it is intended for training girls. I am sure, this new type of the diving tower will help in developing this sport both in the Crimea and throughout the country. Its structure needs no foundation, so it can be transported and installed in any suitable place, it can be assembled like ‘Lego’. Right now, the technical aspects of its installation at one of the Yalta berths is under consideration in order to carry out the platform diving competitions in the resort capital of the Peninsula in the near future. 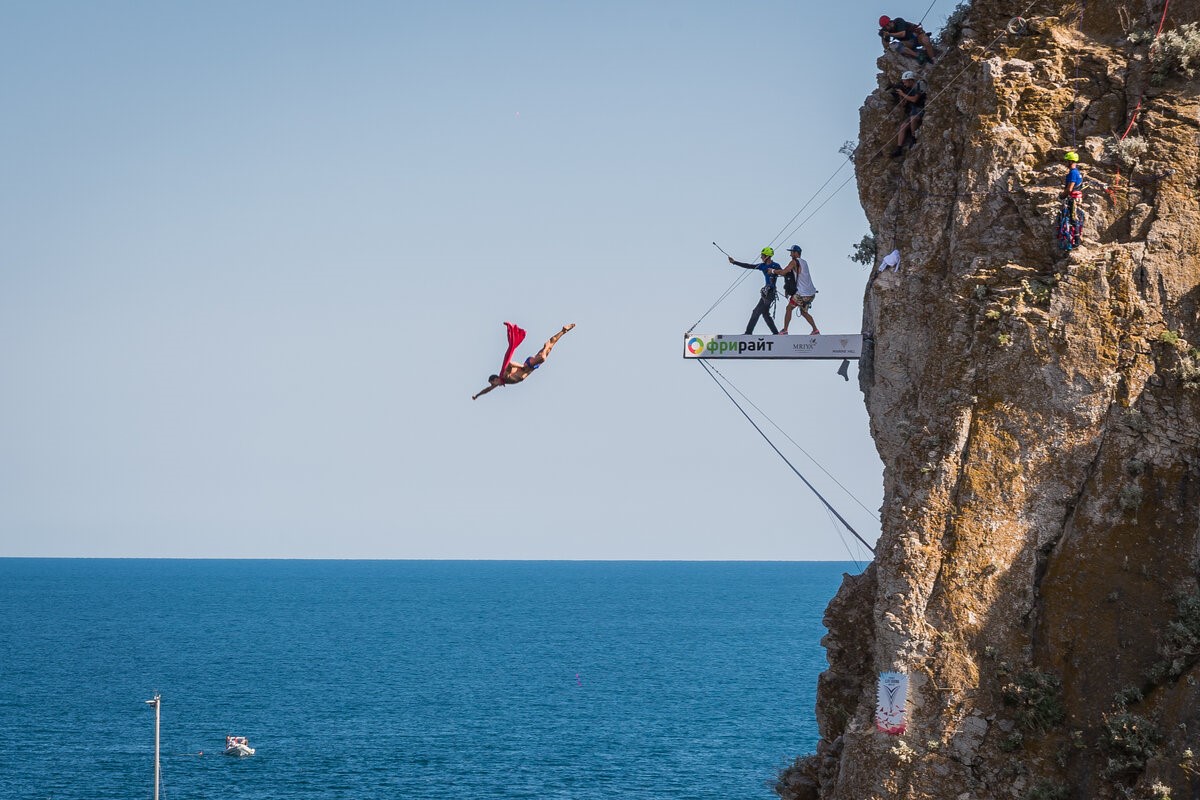 - They say, your bold undertakings are approved by the country's top leadership?

- We held large-scale international cliff diving competitions in the Crimea for the second year in a row and our public organization attracted the attention of the people as well as of the country's leadership. The project was presented in Moscow and won the All-Russian contest of socially significant projects ‘My Project to My Country’ in 2017. When I met Vladimir Putin personally, I received his approval and moral support, which, of course, was very pleasant and it helps now in the development of our projects.

- Nowadays, your company has a whole set of unique tourist recreational facilities throughout the Crimea. What can the guests coming to the Peninsula enjoy now and what are your plans for the near future?

- At the moment, we have six suspension rope bridges in the most picturesque places of the Peninsula. In general, we try to offer our recreational facilities at all places most visited in the Crimea as the tourists do not always have the time and opportunity to travel around the entire Peninsula. Therefore, for example, we want to build the so-called ‘SkyPath’ and ziplines not only on the Ai-Petri (of course, after the co-ordination with the management of the Yalta Mountain-Forest Nature Reserve), but also on the Diva Rock. In general, we have 7 major development projects in the region. We are completing the Sudak Fortress project documentation and actively working in the Grand Canyon, in the New World, in Alushta, at the Dzhur-Dzhur Waterfall. 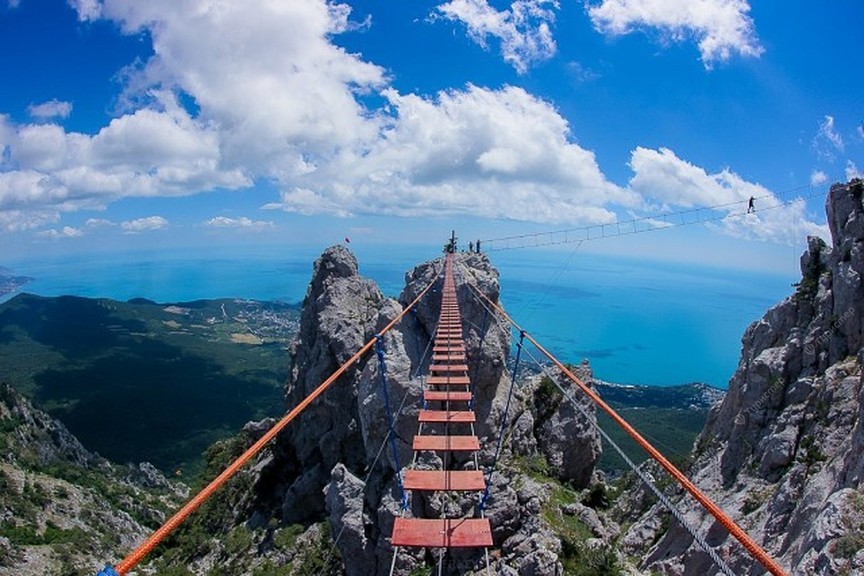 At the same time, we do our best to make our facilities special, different from what was previously offered in the world. For example, the ‘SkyPath’ on the Ai-Petri, which will surround its pinnacles, will have no railings unlike the Chinese versions. Safety of a traveller on it will be ensured by an life line sliding along a steel cable going along a cliff. For those who need additional safety, a special glove will be provided to make it comfortable to hold on to this cable. By June, we will open 15 various facilities. At the first stage, we will install 450 metres of the ‘zipline over the abyss’, and another 200 metres will completed a bit later to cover the symbol of the South Coast of the Crimea with a nice transparent half ring. This structure will be permanent, unlike the rope bridges we have to dismantle after each season to ensure safety. And we ourselves test our facilities. For example, my partner and I tested the zipline on the Ai-Petri immediately after the test bag (imitating the load) was used - his weight is 140 kg, my weight is 75 kg. Fifty seconds of one kilometre ‘flight’ on a roller mounted on a steel rope - along a stone ‘wall’ above the abyss - are really breathtaking, and this ‘flight’ refreshes the feelings and thoughts very well. 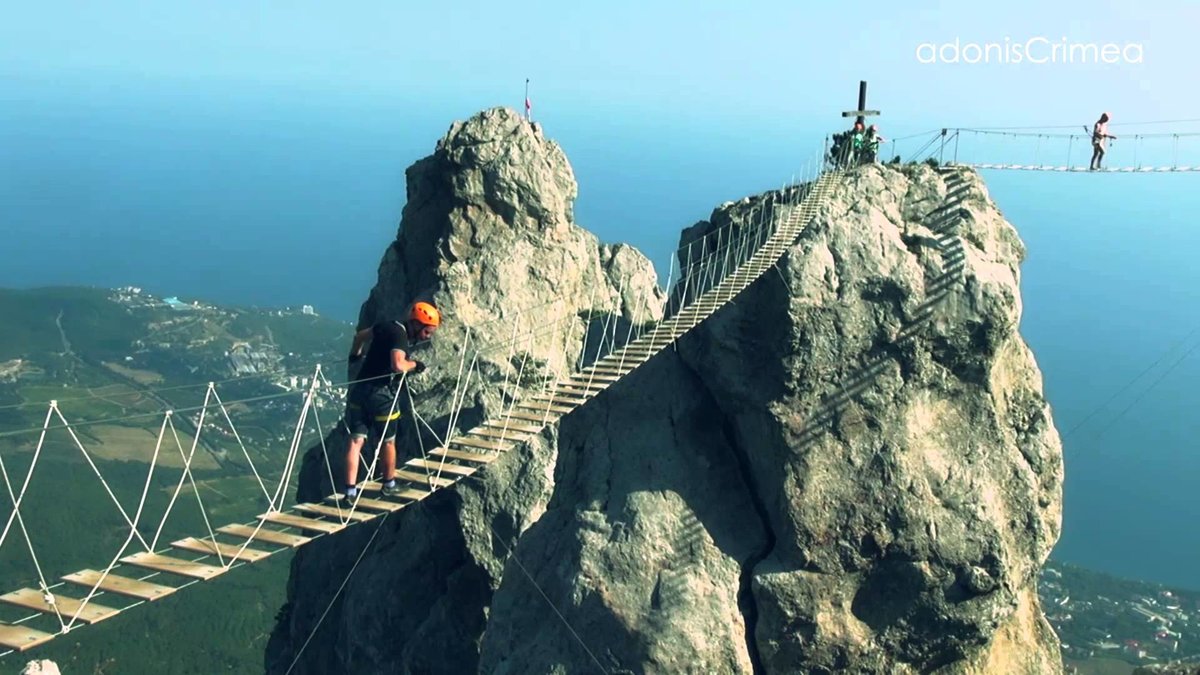 Soon, we will also reinforce the swing - one can safely swing over the abyss, over the boundless waters and the sea horizon. Another idea that our team think to be extremely promising is a hotel in the air. We want to install capsule rooms on a vertical platform at the entrance to the grotto formed in the Ai-Petri mountain group, 80 metres below the pinnacles’ tops, overlooking Yalta. Having a simple dinner in a cave - like the meal the primitive people had long ago - and a deep sleep at the height where birds are flying - what could be more tempting for real extreme tourists and romantics?.. 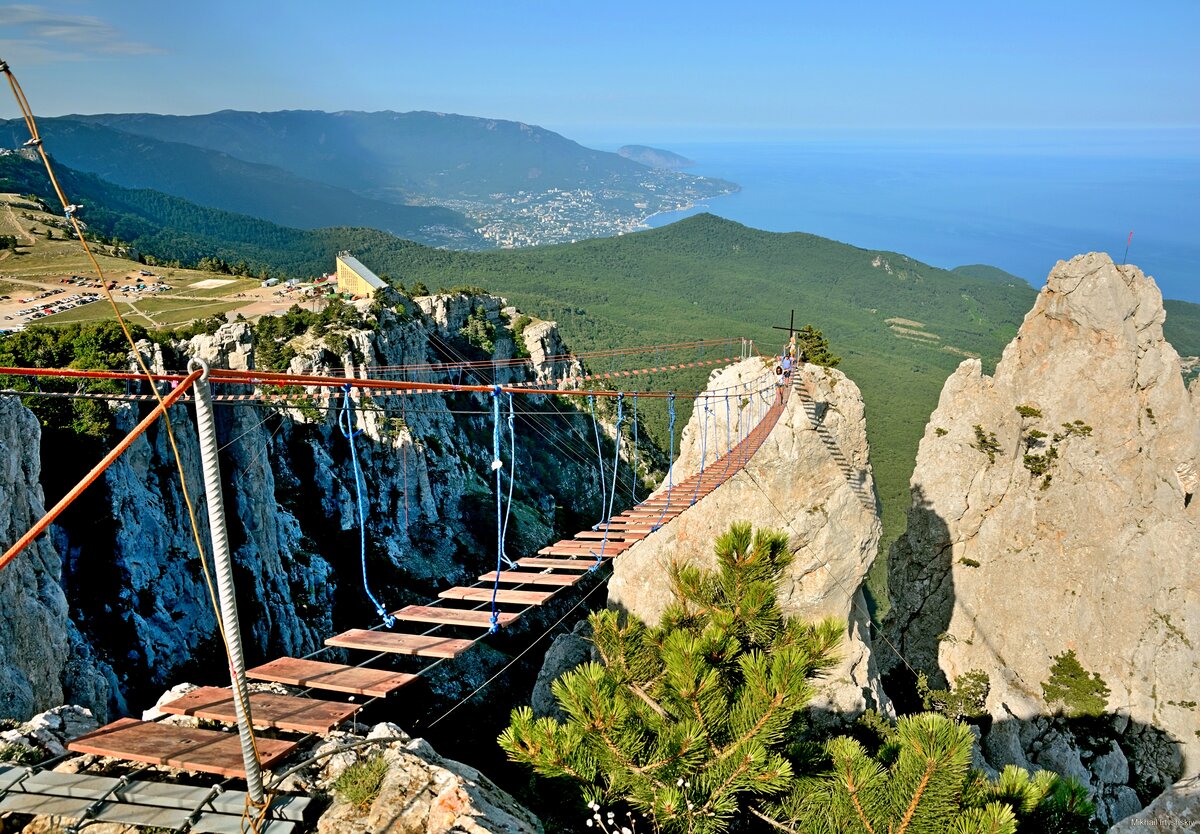 And finally, we are busy with the development of another line of activities that seems very promising - the ecological tourism.

- You mentioned the discussions with the Reserve’s authorities. How are things as a whole because in most cases, your facilities are in specially protected areas or very close to them as the nature is the main Peninsula’s asset attracting tourists here?

- We have a very productive dialogue with Andrey Borodin, the director of the Federal State Institution ‘Zapovedny Crimea’ (Crimea wildlife sanctuary), who took up the position early in this year. He clearly understands the need to preserve the natural wonders of the Peninsula, and at the same time, to give people the opportunity to admire its beauty, breathe in its healing air, and have a walk along its wonderful paths. We signed a cooperation agreement, which outlines our mutual good intentions in this direction. We plan to coordinate and develop all subsequent steps in close contact and for the mutual benefit.

- Finally, a burning issue for the whole industry. Will the tourist season 2020 reopen in the Crimea? What thoughts and feelings do you have entering the summer season?

- We are sure that we will have a tourist season this year, and we really hope that it will start soon. But, if you arrive at clear thinking, the tourist season will become full-fledged no earlier than in the middle of July, and this is a completely optimistic forecast.

Eugenia Karmalito
Staff correspondent, EcoTourism Expert
More
﻿Once the cultural and political centre of ancient Russia, Suzdal is annually visited by about 1.5 million tourists
﻿‘Ecotourists are the best choice for volunteer forest restoration,’ says Elena Gorokhova, director of the ECA Movement
Dmitry Bogdanov, director general of the ‘Znanie’ Health Centre, speaks on how the health centres and resorts in Sochi emerge from the Covid-19 quarantine